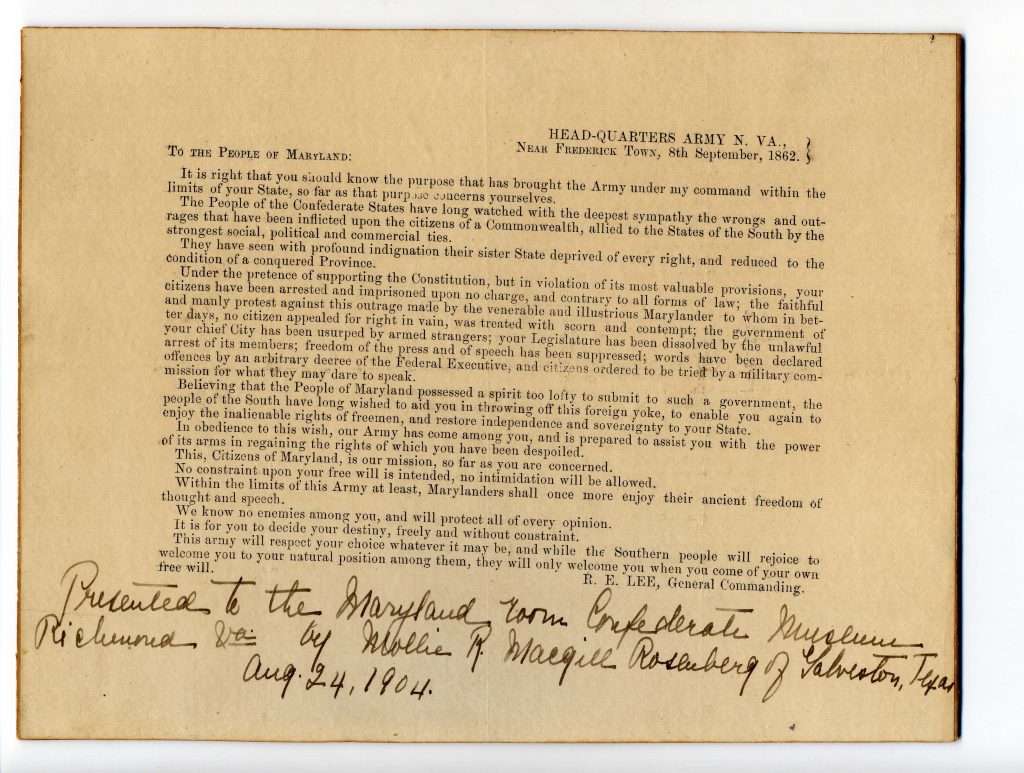 Proclamation to the People of Maryland

To the People of Maryland:

It is right that you should know the purpose that has brought the Army under my command within the limits of your State, so far as that purpose concerns yourselves.

The People of the Confederate States have long watched with the deepest sympathy the wrongs and outrages that have been inflicted upon the citizens of a Commonwealth, allied to the States of the South by the strongest social, political and commercial ties.

They have seen with profound indignation their sister State deprived of every right, and reduced to the condition of a conquered Province.

Under the pretence of supporting the Constitution, but in violation of its most valuable provisions, your citizens have been arrested and imprisoned upon no charge, and contrary to all forms of law; the faithful and manly protest against this outrage made by the venerable and illustrious Marylander to whom in better days, no citizen appealed for right in vain, was treated with scorn and contempt; the government of your chief City has been usurped by armed strangers; your Legislature has been dissolved by the unlawful arrest of its members; freedom of the press and of speech has been suppressed; words have been declared offences by an arbitrary decree of the Federal Executive, and citizens ordered to be tried by a military commission for what they may dare to speak.

Believing that the People of Maryland possessed a spirit too lofty to submit to such a government, the people of the South have long wished to aid you in throwing off this foreign yoke, to enable you again to enjoy the inalienable rights of freemen, and restore independence and sovereignty to your State.

In obedience to this wish, our Army has come among you, and is prepared to assist you with the power of its arms in regaining the rights of which you have been despoiled.

This, Citizens of Maryland, is our mission, so far as you are concerned.

No constraint upon your free will is intended, no intimidation will be allowed.

Within the limits of this Army at least, Marylanders shall once more enjoy their ancient freedom of thought and speech.

We know no enemies among you, and will protect all of every opinion.

It is for you to decide your destiny, freely and without constraint.

This army will respect your choice whatever it may be, and while the Southern people will rejoice to welcome you to your natural position among them, they will only welcome you when you come of your own free will.