John Brooke Prentis was born in 1788 at Green Hill, his family’s estate in Williamsburg. His parents were Joseph Prentis and Margaret Bowdoin Prentis. He was the fifth of eight children, of whom one brother and two sisters survived to adulthood. A well-known judge and politician, Joseph Prentis served on the Council of State (1779–1781) and in the House of Delegates (1776–1779, 1781–1788) and as Speaker of the House (1787–1788).

Little is known of John B. Prentis’s early life and education. After his mother’s death, in August 1801, he and his siblings were cared for by an aunt, Susan Bowdoin, of Northampton County. His family described him as an indifferent student, and his father worried about his “steadiness of mind, and evenness of manners.” In May 1805 Prentis traveled to Philadelphia, where, until 1810, he apprenticed for the Quaker architect Charles E. Smith. In a letter to his father, dated December 6, 1805, he wrote, “Thee always seemed a little displeased at my working with the blacks but I can assure thee it is not the case now for I have not seen one black man Apprentice since I came to the City of Philadelphia.” Such assurances notwithstanding, Prentis had quickly come to adopt Quaker modes of address and perhaps some antislavery sentiments as well.

In 1810, Prentis finished his apprenticeship and moved to Richmond, where he went to work for a Quaker architect named Winston. His father had died the year before, leaving his estate to be divided equally among his four children. The eldest son and executor, Joseph Prentis Jr., took almost twenty years to settle his father’s affairs, creating an undercurrent of bitterness between the brothers. John Prentis served as an officer in the Richmond Light Artillery during the War of 1812, and on March 12, 1814, married Catharine Dabney, of Henrico County, at the Shockoe Presbyterian Church, in Richmond. They had no children.

Prentis later described himself and his wife as being, at the beginning of their marriage, “very poor.” In the subsequent years, however, he worked as a builder, bought and sold both real estate and enslaved people, farmed, and bred horses. Even as he amassed wealth he identified with a working-class lifestyle against his elite upbringing. On July 2, 1817, the U.S. government commissioned him to imprison a group of captured pirates, which he did for several months at a rate of $14 per day. By 1820, he had set aside whatever sympathy he had once had for African Americans and come to concentrate on the slave trade.

Richmond’s Slave Trade
The rise of cotton production in the Deep South, paired with the end of the  transatlantic slave trade, had created a huge domestic market for enslaved labor. Between 1790 and 1860, more than 1 million enslaved men, women, and children were transported from the Upper South—mostly Virginia—to cotton states. Two-thirds of those were the result of sales conducted by men such as Prentis. During the summer months, he traveled across the Upper South buying slaves from private sellers, at public auctions, and through court-run estate sales. He then arranged for their sale, either at auctions in Richmond or, more profitably, in Deep South markets. When he wasn’t buying slaves, Prentis was transporting them south. In 1828, he took on an assistant, William Priddy, who worked for him for fifteen years. 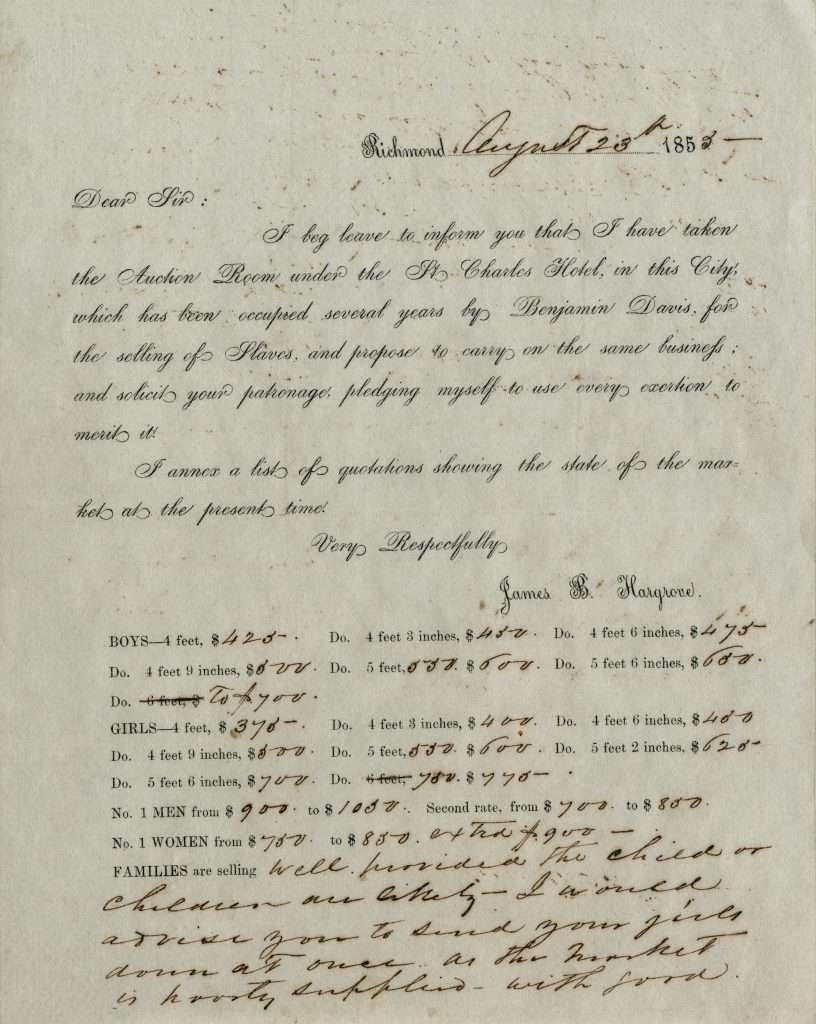 In 1822, Prentis was taxed on 6 acres of land, but within four years he had accumulated more than 100 acres, including a large lot on what came to be called Prentis’s Alley or Prentis’s Row, in an African American neighborhood of Richmond north of Broad Street (later Jackson Ward). He likely operated a so-called jail there, used to confine enslaved men, women, and children awaiting sale. Unlike for competitors such as Robert Lumpkin, however, this was not a primary source of income for Prentis. His business flourished when the markets were good and suffered when they were not. For a time after 1831 he indicated an interest only in buying and selling enslaved women, although the reasons for this are unclear. Some traders dealt in what they called “fancy” women, or enslaved women exploited for sexual purposes. On January 29, 1836, Prentis wrote to his brother bragging that he had sold one group of slaves for $25,850, half received in cash, the other half in credit at 8 percent interest.

His health failing, Prentis wrote his will on May 14, 1848, and died at his Church Hill home on September 13. He was buried at Shockoe Hill Cemetery. Although his letters suggest a frustration and insecurity where more elite society was concerned, his death was noted on the front page of the Richmond Daily Whig (September 15) and later inside the Richmond Enquirer (October 6). To the surprise of his extended family, Prentis left his entire estate to his wife, making arrangements for the manumission of a mixed-race enslaved girl and any children she might have. He also made provisions for Emily McCabe, a ward of the Prentises, and an enslaved person he identified as “My boy Edmond.” It is unclear whether Prentis was the person’s father.