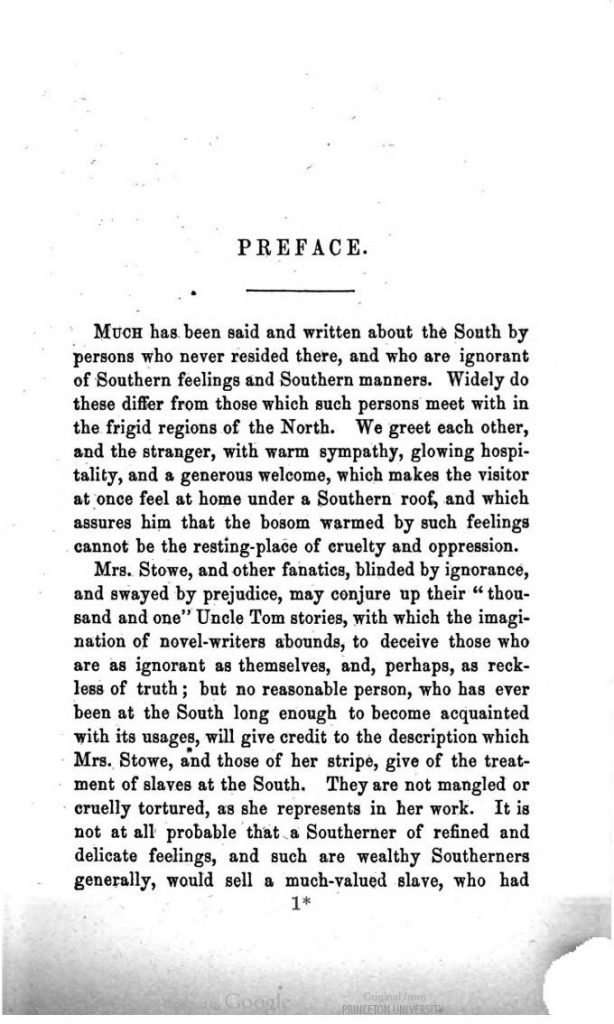 Preface; an excerpt from Antifanaticism: A Tale of the South by Martha Haines Butt (1853), Page v

Much has been said and written about the South by persons who never resided there, and who are ignorant of Southern feelings and Southern manners. Widely do these differ from those which such persons meet with in the frigid regions of the North. We greet each other, and the stranger, with warm sympathy, glowing hospitality, and a generous welcome, which makes the visitor at once feel at home under a Southern roof, and which assures him that the bosom warmed by such feelings cannot be the resting-place of cruelty and oppression.

Mrs. Stowe, and other fanatics, blinded by ignorance, and swayed by prejudice, may conjure up their “thousand and one” Uncle Tom stories, with which the imagination of novel-writers abounds, to deceive those who are as ignorant as themselves, and, perhaps, as reckless of truth; but no reasonable person, who has ever been at the South long enough to become acquainted with its usages, will give credit to the description which Mrs. Stowe, and those of her stripe, give of the treatment of slaves at the South. They are not mangled or cruelly tortured, as she represents in her work. It is not at all probable that a Southerner of refined and delicate feelings, and such are wealthy Southerners generally, would sell a much-valued slave, who had 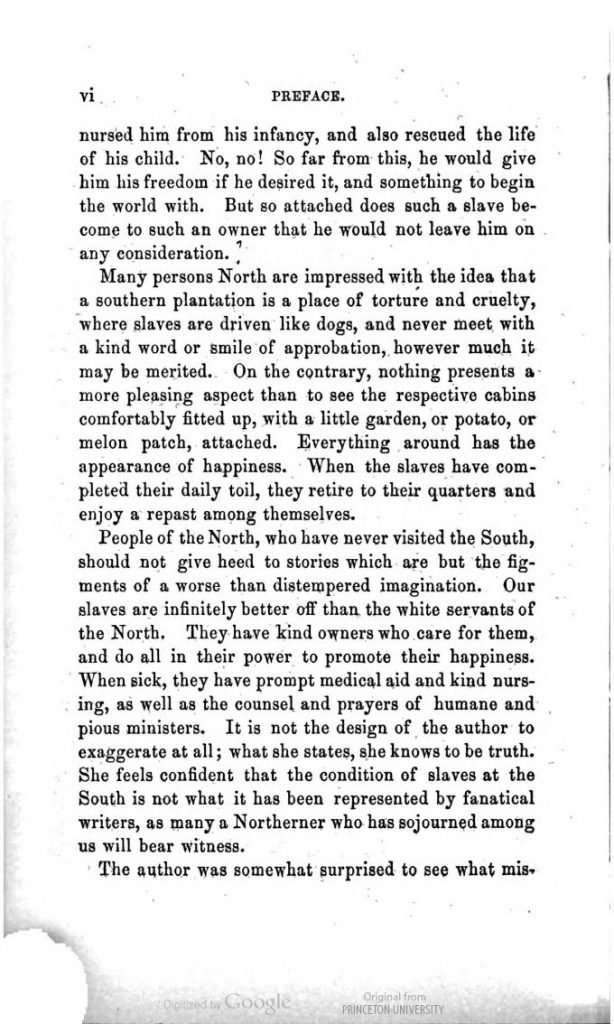 Preface; an excerpt from Antifanaticism: A Tale of the South by Martha Haines Butt (1853), Page vi

nursed him from his infancy, and also rescued the life of his child. No, no! So far from this, he would give him his freedom if he desired it, and something to begin the world with. But so attached does such a slave become to such an owner that he would not leave him on any consideration.

Many persons North are impressed with the idea that a southern plantation is a place of torture and cruelty, where slaves are driven like dogs, and never meet with a kind word or smile of approbation, however much it may be merited. On the contrary, nothing presents a more pleasing aspect than to see the respective cabins comfortably fitted up, with a little garden, or potato, or melon patch, attached. Everything around has the appearance of happiness. When the slaves have completed their daily toil, they retire to their quarters and enjoy a repast among themselves.

People of the North, who have never visited the South, should not give heed to stories which are but the figments of a worse than distempered imagination. Our slaves are infinitely better off than the white servants of the North. They have kind owners who care for them, and do all in their power to promote their happiness. When sick, they have prompt medical aid and kind nursing, as well as the counsel and prayers of humane and pious ministers. It is not the design of the author to exaggerate at all; what she states, she knows to be truth. She feels confident that the condition of slaves at the South is not what it has been represented by fanatical writers, as many a Northerner who has sojourned among us will bear witness.

The author was somewhat surprised to see what mis- 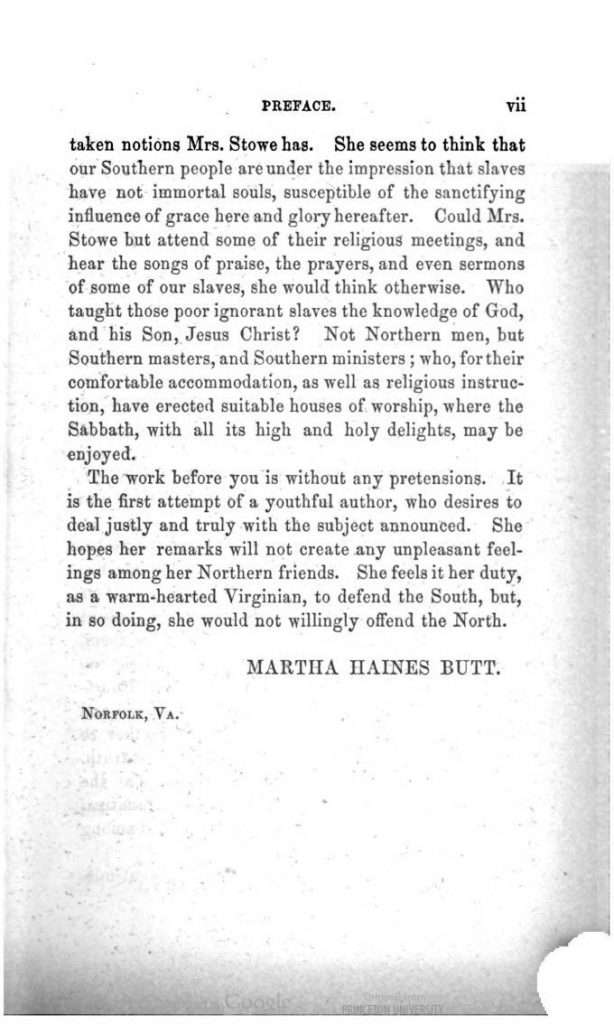 Preface; an excerpt from Antifanaticism: A Tale of the South by Martha Haines Butt (1853), Page vii

taken notions Mrs. Stowe has. She seems to think that our Southern people are under the impression that slaves have not immortal souls, susceptible of the sanctifying influence of grace here and glory hereafter. Could Mrs. Stowe but attend some of their religious meetings, and hear the songs of praise, the prayers, and even sermons of some of our slaves, she would think otherwise. Who taught those poor ignorant slaves the knowledge of God, and his Son, Jesus Christ? Not Northern men, but Southern masters, and Southern ministers; who, for their comfortable accommodation, as well as religious instruction, have erected suitable houses of worship, where the Sabbath, with all its high and holy delights, may be enjoyed.

The work before you is without any pretensions. It is the first attempt of a youthful author, who desires to deal justly and truly with the subject announced. She hopes her remarks will not create any unpleasant feelings among her Northern friends. She feels it her duty, as a warm-hearted Virginian, to defend the South, but, in so doing, she would not willingly offend the North.