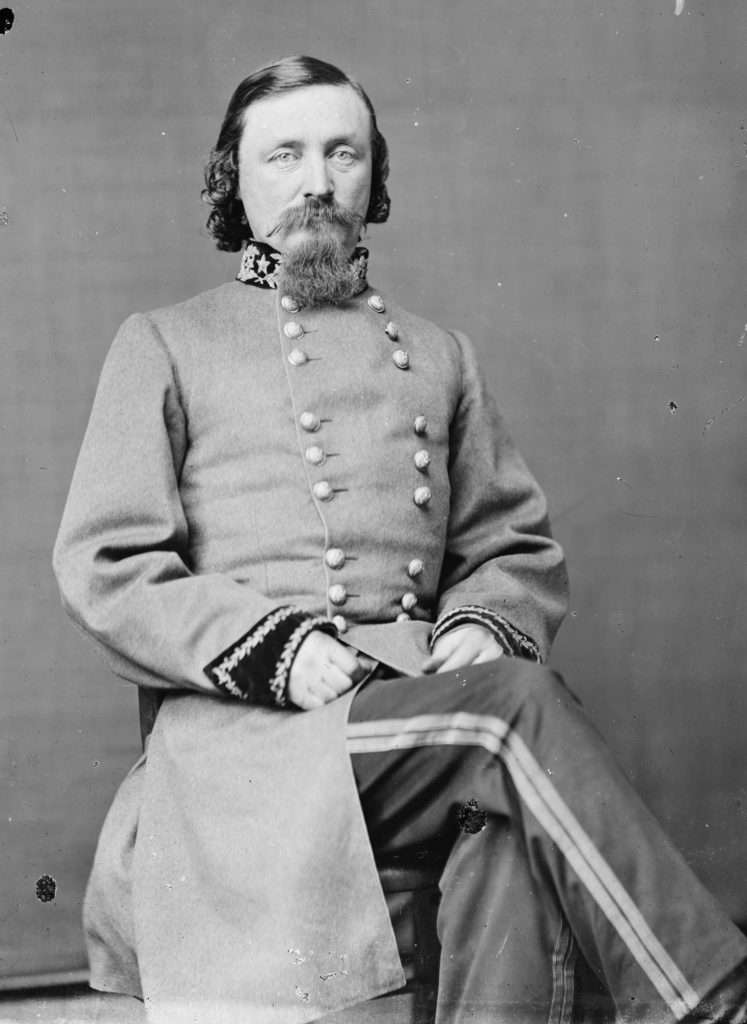 Corbell was born Sallie Ann Corbell on May 16, 1843, in Nansemond County, the eldest of nine children. Her parents, David John Corbell and Elizabeth Phillips Corbell, were slaveholders and owned a plantation near Suffolk. Corbell attended the Lynchburg Female Seminary in Lynchburg. She claimed to have met Pickett sometime during the antebellum years, although her account that they became engaged when she was a young girl seems highly unlikely. As an army officer, Pickett spent most of this time stationed on the western frontier. He was even married briefly to an Indian woman in Washington Territory.

Once the war started, however, a passionate romance blossomed between Corbell and the famously long-locked general. For a time, Pickett slipped away nightly from his command to see her, behavior that did not always sit well with his fellow Confederate officers and soldiers. To Corbell, however, it was proof of his chivalric love and devotion to her. The two married on September 15, 1863, at Saint Paul’s Episcopal Church in Petersburg, just a few months after the disastrous Confederate defeat at Gettysburg, and Corbell claimed that she often joined her husband near the front lines while he served with the Army of Northern Virginia. Their son George was born in 1864. 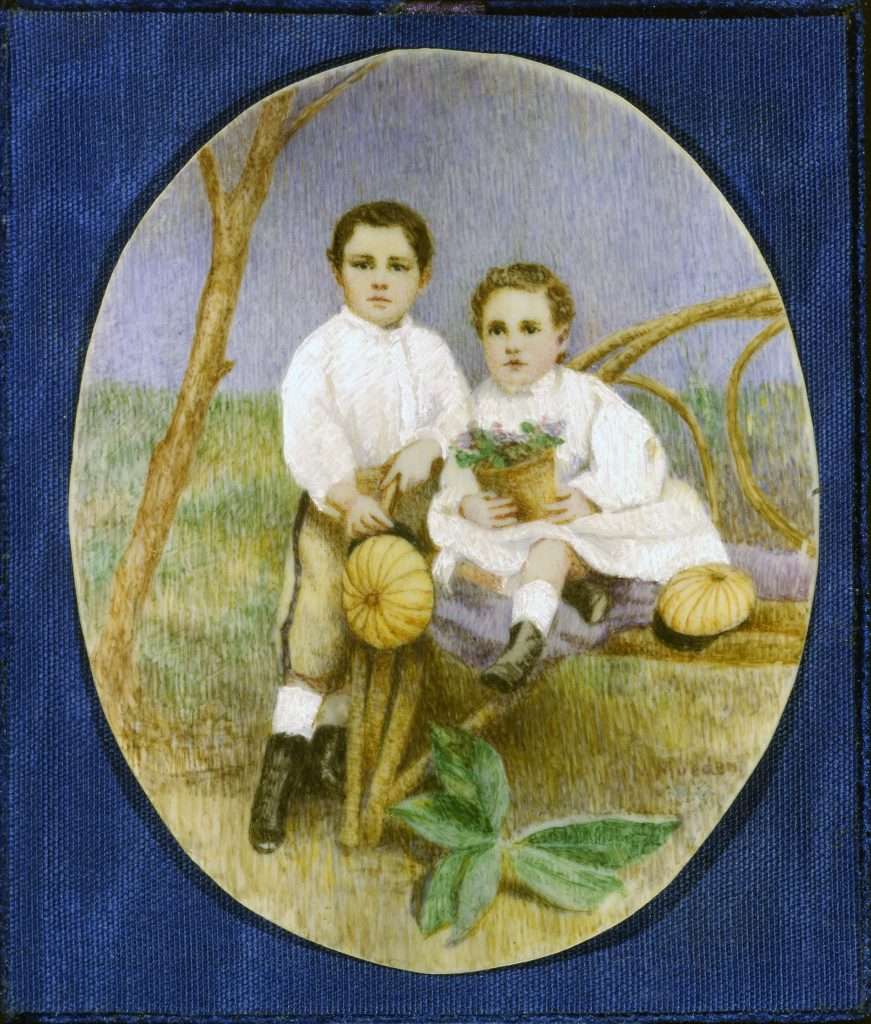 The Pickett Children, George and Corbell

The end of the war brought with it disgrace and disillusionment. George Pickett never recovered from the bitter loss of his division on the third day at Gettysburg, and he was briefly under investigation for war crimes stemming from the execution in 1864 of twenty-two captured Union prisoners at Kinston, North Carolina. The Picketts fled to Montreal for a few months, where she taught Latin and sold her jewelry, before returning to Virginia. Their youngest son, Corbell, died in 1874, at the age of eight. The former general, long plagued by an explosive temper and ill health, died the following year, at the age of fifty.

Sallie Pickett lived for fifty-six more years, raising their surviving son, finding much-needed work in the U.S. Pensions office in Washington, D.C., and in the 1880s becoming an author and public speaker. Rather than address her authentic experience as the wife of a famous but troubled and controversial general, she invented a new self: LaSalle Corbell Pickett, “Child-bride of the Confederacy.” She subtracted years from her age (sometimes five, sometimes even more) and told stories from the perspective of a child, smoothing the complexities of the antebellum South and slavery into a self-justifying myth soaked in the “fragrance of the snowy magnolias.” 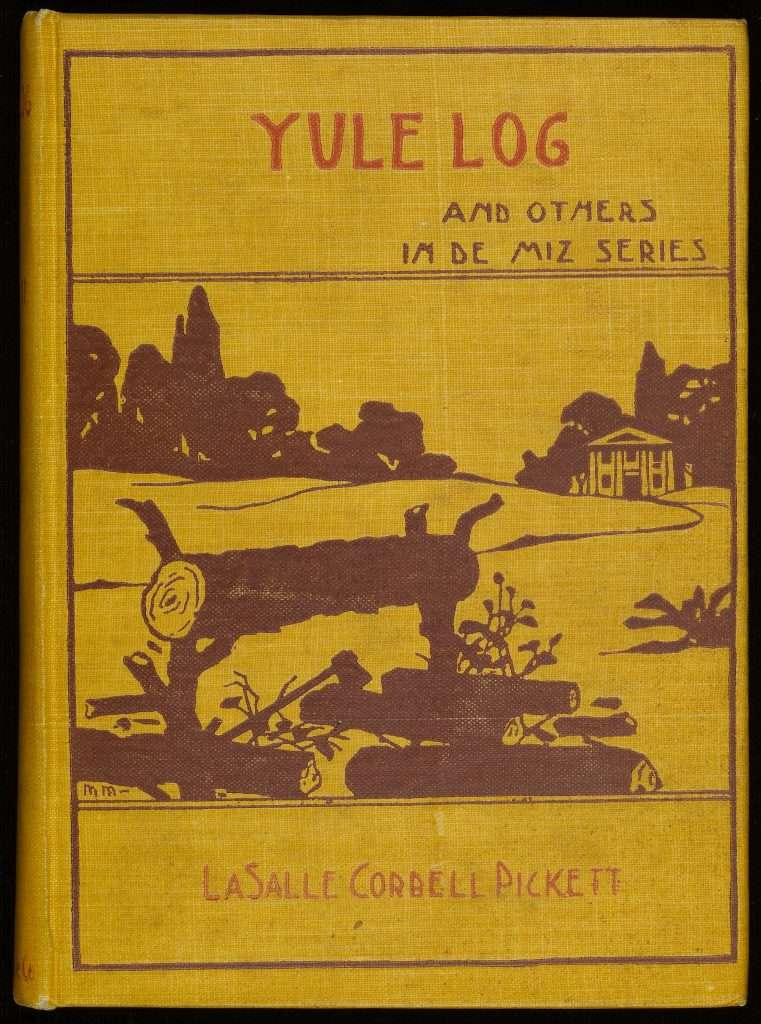 This new Pickett was always the loyal and dependent Southern wife and her husband the glorious hero of Gettysburg. In Pickett and His Men, she described the general as possessing “the greatest capacity for happiness and such dauntless courage and self-control that, to all appearances, he could as cheerfully and buoyantly steer his way over the angry, menacing, tumultuous surges of life as over the waves that glide in tranquil smoothness and sparkle in the sunlight of a calm, clear sky.” Meanwhile, Pickett regaled her audiences with stories of happy and obedient slaves, and famously performed what she insisted to be a “phonetically genuine” slave dialect. In Kunnoo Sperits (1900), she explained that, for her, the language was “part of the sunlight of childhood.”

Many of her published writings blurred the lines between fact and fiction. Historian Gary W. Gallagher has convincingly argued that she plagiarized large portions of Pickett and His Men and, apparently, fabricated an entire wartime correspondence from her husband. (The Heart of a Soldier, As Revealed in the Intimate Letters of Gen’l George E. Pickett, C.S.A. was published in 1913, and Soldier of the South: General Pickett’s War Letters to His Wife, edited by Arthur Crew Inman, appeared in 1928.) Those letters, meanwhile, have insinuated themselves into American memory. They have been cited by historians, used in Michael Shaara’s Pulitzer Prize–winning novel, The Killer Angels (1974), and quoted by Ken Burns in his documentary The Civil War (1990). 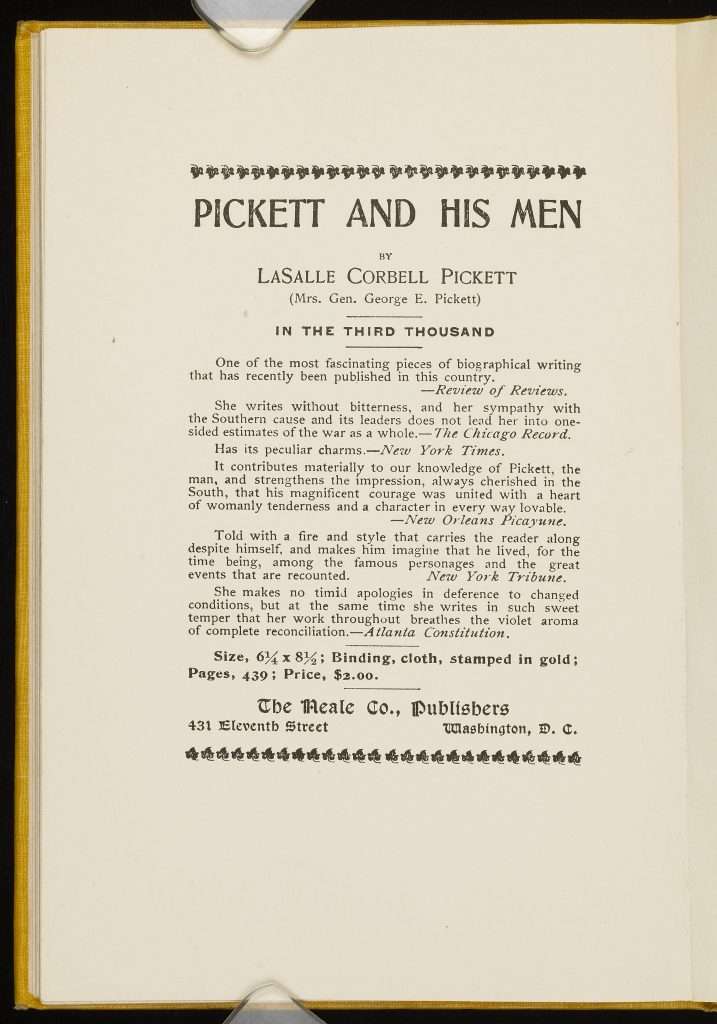 Pickett’s writing is an example of Lost Cause literature, which was popular late in the nineteenth century and early in the twentieth century. The Lost Cause view of the Civil War was developed by former Confederate generals, such as Jubal A. Early, who were attempting to explain and justify Confederate defeat. According to Lost Cause writers, the Civil War did not start because of slavery, secession was a constitutional right, Confederate generals were knightly heroes, and the South only lost because it was outmanned and outgunned.

By idealizing her husband as the hero of the Civil War’s most famous battle, Pickett positioned herself to be at the center of American efforts to memorialize the conflict. At the 1887 Gettysburg reunion, for instance, she signed autographs and shook hands with veterans of both the Union and Confederate armies. In fact, because her writing, and Lost Cause writing in general, was accepted across sectional boundaries, it became an important part of the country’s reconciliation. “Enthusiasm over Mrs. Pickett’s lecture on Gettysburg surpasses anything ever known here,” one Bostonian wrote in 1910. It was the “first time in history, [that] more than 2,000 Bostonians ever stood up when the band played ‘Dixie.'”

LaSalle Corbell Pickett died on March 22, 1931, having achieved a good deal of personal autonomy celebrating a man and helping to create a myth.