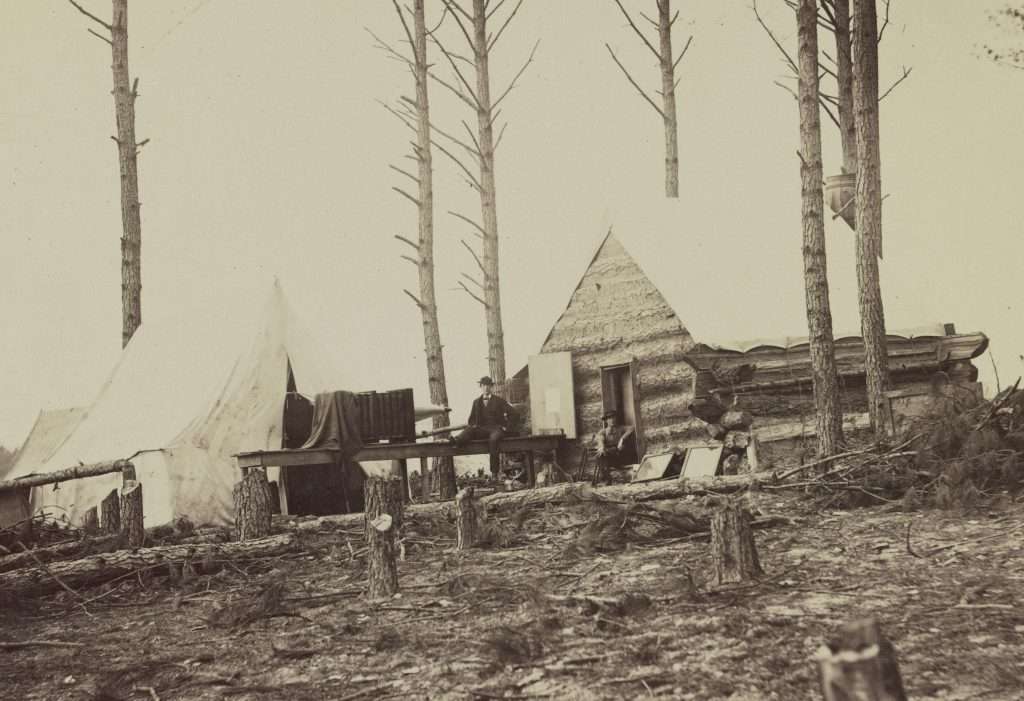 The daguerreotype process, which produced an image on a metal plate, was released to the public in 1839. It was named after its inventor, Louis-Jacques-Mandé Daguerre of France, who had collaborated with Joseph-Nicéphore Niepce. The same year, William Henry Fox Talbot in England announced a photographic process that produced paper negatives and prints. The collodion process (wherein a glass is coated with a sticky substance, sensitized, immediately exposed, and then developed and fixed) surpassed the daguerreotype in popularity by the late 1850s. A single wet-plate collodion negative yielded many positive images. During the Civil War era, the ambrotype—an image on glass—joined the tintype—an image on an iron plate—as popular means of distributing images. Audiences also greatly consumed the carte de visite—a portrait glued to paper stock.

By the time of the Civil War, photography was increasingly professionalized. Journals and national organizations dedicated to the medium helped legitimize a field that had once been notoriously disreputable. Before the war, every major Southern city featured photographic studios, while itinerant photographers traveled throughout the countryside to offer their services. Richmond served as an especially prominent center for photography including the notable Pratt’s Virginia Gallery, founded by William A. Pratt.

Many Northern men gained prominence through their wartime photographs. Mathew Brady, already famous before the war, was the first to organize a group of field photographers and the first to publish war images in albums, both as single prints, and as paired-image stereographs. Scottish-born photographer Alexander Gardner—part of Brady’s original team—formed his own studio late in 1862, which included, among others, Timothy O’Sullivan. New York City’s Edward and Henry T. Anthony were the most important publishers and wholesale distributors of photographic views. Others—such as A. J. Russell, who served as the official photographer for the United States Military Railroads—recorded the Union war effort through their photographs. Southern photographers faced greater travails than their Northern counterparts.

In the first months of the war, such Southern photographers as J. D. Edwards and the team of Osborn and Durbec actively documented the Confederacy through their images. The Union blockade, however, produced an economic crisis that drove up prices at a time when commodities were already scarce. In 1862, Humphrey’s Journal noted that “the Photographic Art down South has completely died out in consequence of war.” According to scholar Bob Zeller, South Carolina–based photographer George S. Cook was the only Southerner who managed to make and sell stereographs throughout the war’s duration.

In May 1861, Charles R. Rees ran an advertisement in the Richmond Dispatch for his “finely executed” photographs and ambrotypes. In the early months of the war, scores of men traveled to the studios of photographers like Rees to have their portraits taken in their new military uniforms. Once the armies settled in camps, photographers followed to document what many initially deemed a grand adventure.

As the war progressed, photographers’ lenses turned to sites of combat. Audiences, in the midst of a communication revolution, clamored for scenes of the war. A July 1862 issue of the Richmond Whig asked for “some of our photographers” to repair “to the scenes of the late battles, and take views of the fortifications, camps, etc. Such views would constitute valuable illustrations” of historical events. Taking photographs in the field proved extremely difficult. Technological limitations and cumbersome equipment made it nearly impossible to capture the action of battle; photographers instead documented battlefields after the action, landscapes, and scenes of army life. Nevertheless, the photographic achievements of the Civil War, Bob Zeller notes, “far exceeded those of any other war in the nineteenth century.”

Photographers did manage to take some distant scenes of battle. In the autumn of 1863, teams of photographers recorded army and naval operations in Charleston Harbor, South Carolina. George S. Cook took two remarkable live-action shots of Union gunboats engaged in combat. Cook’s two photographs were the first verifiable images of battle captured while the photographer himself was under fire. Philip Haas and Washington Peale, operating in a different area, captured five Monitor-class ironclads and the U.S.S. New Ironsides in action. 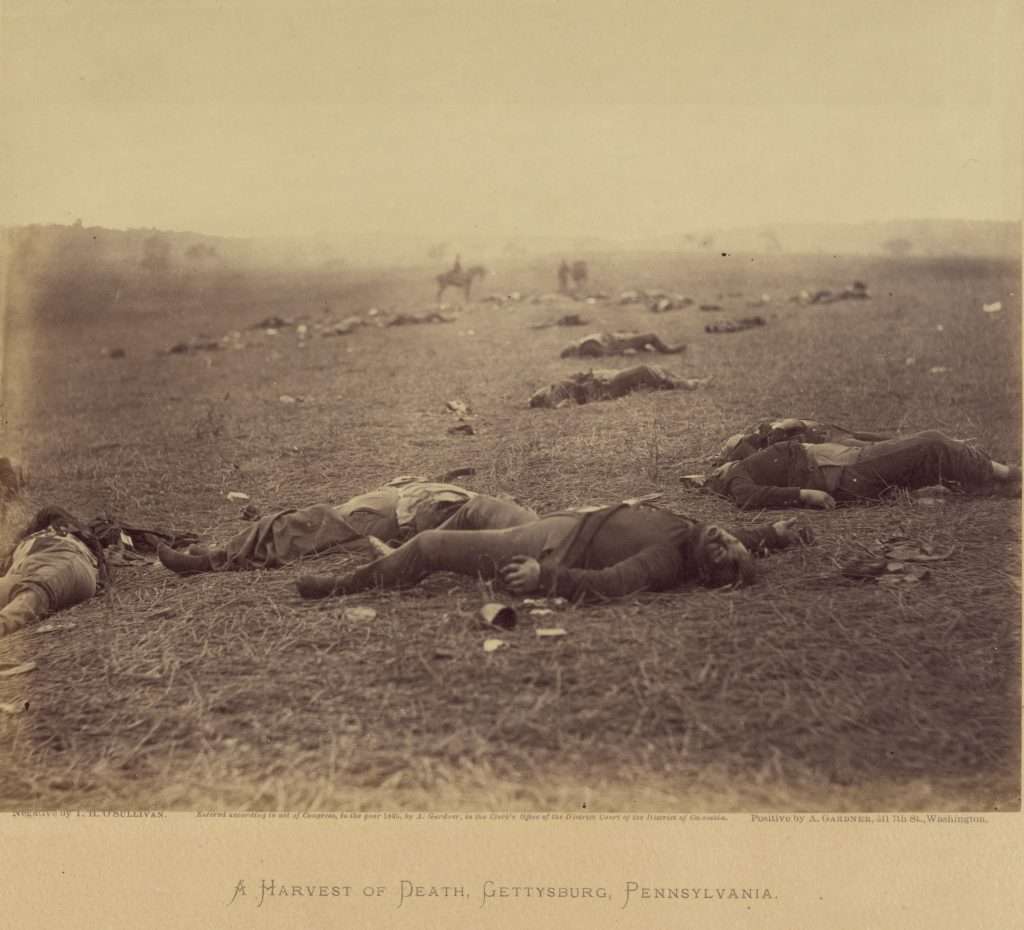 After the smoke of battle cleared, photographers traveled to the battlefields. During the course of the war, photographers recorded images of unburied dead soldiers on seven occasions—following the battles of Antietam (1862), Corinth (1862), Second Fredericksburg (1863), Gettysburg (1863), Spotsylvania (1864), and, in 1864, on the occasion of burials at Fredericksburg and Petersburg. These images, which deeply moved those who saw them, remain the most profoundly important views of the struggle. In July 1863, American poet Oliver Wendell Holmes Sr. reflected on photographs from the Battle of Antietam in an Atlantic Monthly article. “Let him who wishes to know what war is look at this series of illustrations,” Holmes wrote. “These wrecks of manhood thrown together in careless heaps or ranged in ghastly rows for burial were alive but yesterday.” Now, in stark black-and-white images the viewer confronted “some conception of what a repulsive, brutal, sickening, hideous thing” the war was.

Virginia played a significant role in Civil War photography. From A. J. Russell’s 1863 image of Confederate officers and soldiers posed along the Rappahannock River in Fredericksburg, Virginia, to Timothy O’Sullivan’s “Grant’s Council of War,” taken on May 21, 1864, at the crossroads of Massaponax Church, the photographer’s camera often aimed at the Virginia landscape. And, while the strains of war ravaged Southern photographic studios, the American Journal of Photography reported in September 1863, “only in Charleston and perhaps Richmond that any photographs at all are made.” 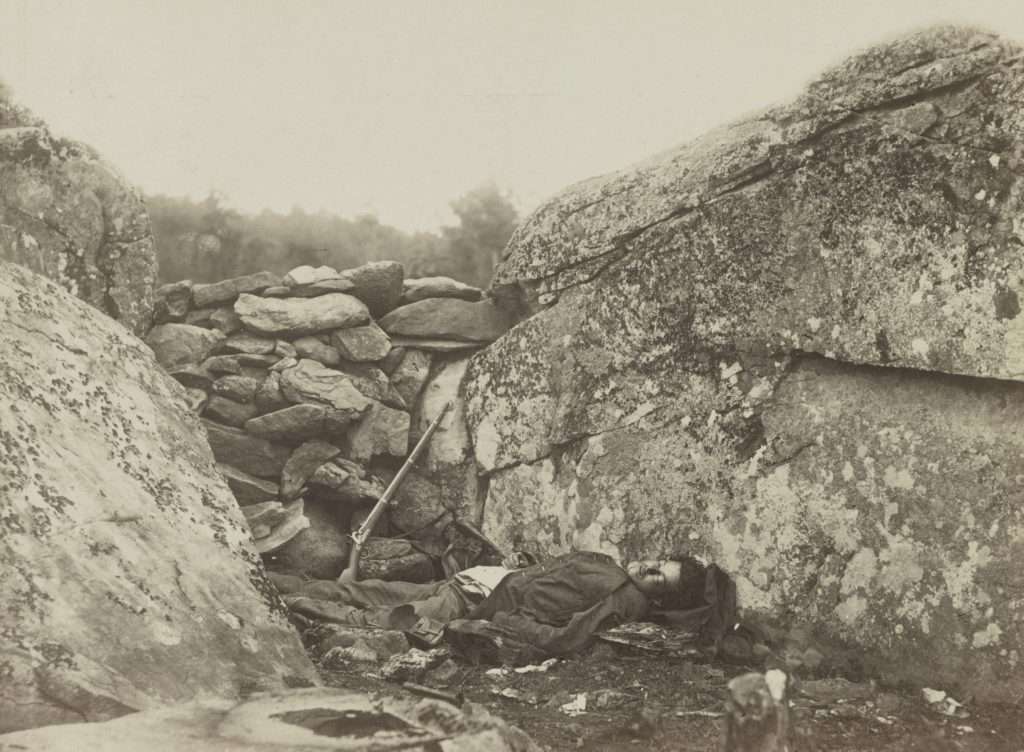 While photographs captured the realities of war, photographers sometimes manipulated the scenes themselves. Historians of photography have demonstrated that Civil War–era photographers often resorted to stagecraft to convey a particular look. Alan Trachtenberg explains that photographers arranged “scenes of daily life in camp to convey a look of informality” or posed “groups of soldiers on picket duty—perhaps moving corpses into more advantageous positions for dramatic close-ups of littered battlefields.” William A. Frassanito’s painstaking research shows that Gardner and O’Sullivan, for example, found a youthful Confederate soldier lying dead near the southern slope of Devil’s Den, near Gettysburg, Pennsylvania. After capturing several images of the youth they moved the body approximately forty yards to make the now iconic image “Home of a Rebel Sharpshooter, Gettysburg, July, 1863.”

Photography in the War’s Aftermath

With the end of the Civil War, wartime photographs faced an uncertain future. In 1866, two significant publications narrated the war through imagery and word, but both initially had only limited success. George N. Barnard released Photographic Views of Sherman’s Campaign and Alexander Gardner printed the now-famous Gardner’s Photographic Sketchbook of the American Civil War. Both books, in the words of Alan Trachtenberg, “resemble each other in their unqualified support of the Union and their undisguised hatred of slavery and Southern aristocracy.” The first eighteen plates in Gardner’s book are dedicated to such Virginia locations as the Marshall House in Alexandria—where Union colonel Elmer Ellsworth was killed—and the entrenchments at Yorktown, Virginia. Even Mathew Brady fell on hard times. Deeply in debt after the war, Brady repeatedly approached the U.S. Congress, asking them to purchase his wartime images. They finally complied in 1875, paying $25,000 for his collection of negatives, now archived at the Library of Congress in Washington, D.C.