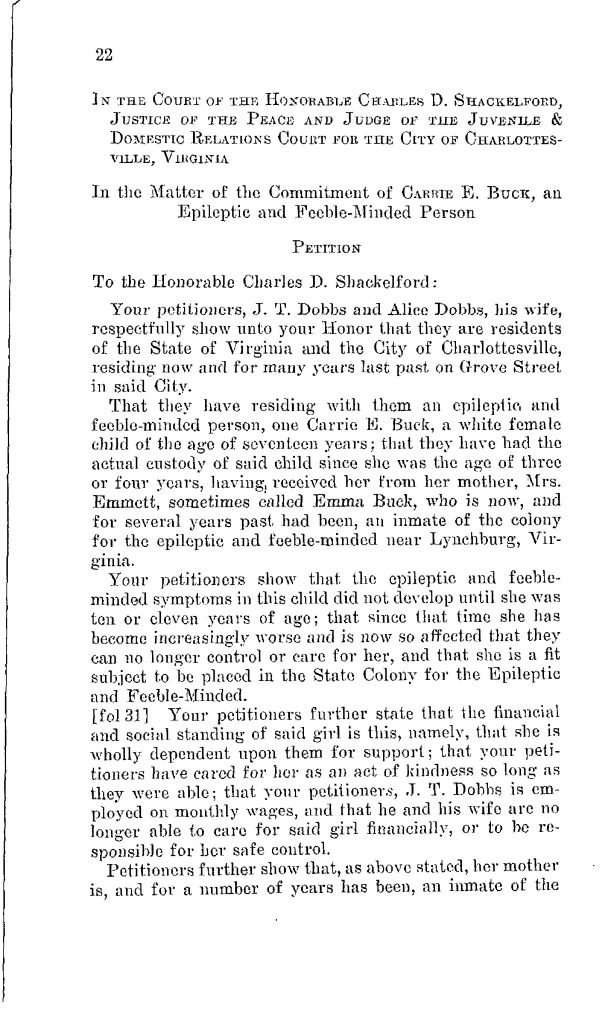 In the Court of the Honorable Charles D. Shackelford, Justice of the Peace and Judge of the Juveniles & Domestic Relations Court for the City of Charlottesville, Virginia
A. S. Priddy, M. D., Superintendent,
In the Matter of the Commitment of Carrie E. Buck, an Epileptic and Feeble-Minded Person

To the Honorable Charles D. Shackelford:

Your petitioners, J. T. Dobbs and Alice Dobbs, his wife, and respectfully show unto your Honor that they are residents of the State of Virginia and the City of Charlottesville, residing now and for many years last past on Grove Street in said City.

That they have residing with them an epileptic and feeble-minded person, one Carrie E. Buck, a white female child of the age of seventeen years; that they have had the actual custody of said child since she was the age of three or four years, having received her from her mother, Mrs. Emmett, sometimes called Emma Buck, who is now, and for several years past had been, an inmate of the colony for the epileptic and feeble-minded near Lynchburg, Virginia.

Your petitioners show that the epileptic and feeble-minded symptoms in this child did not develop until she was ten or eleven years of age; that since that time she has become increasingly worse and is now so affected that they can no longer control or care for her, and that she is a fit subject to be placed in the State Colony for the Epileptic and Feeble-Minded.

[fol. 31] Your petitioners further state that the financial and social standing of said girl is this, namely, that she is wholly dependent upon them for support; that your petitioners have cared for her as an act of kindness so long as they were able; that your petitioners, J. T. Dobbs is employed on monthly wages, and that he and his wife are no longer able to care for said girl financially, or to be responsible for her safe control.

Petitioners further show that, as above stated, her mother is, and for a number of years has been, an inmate of the 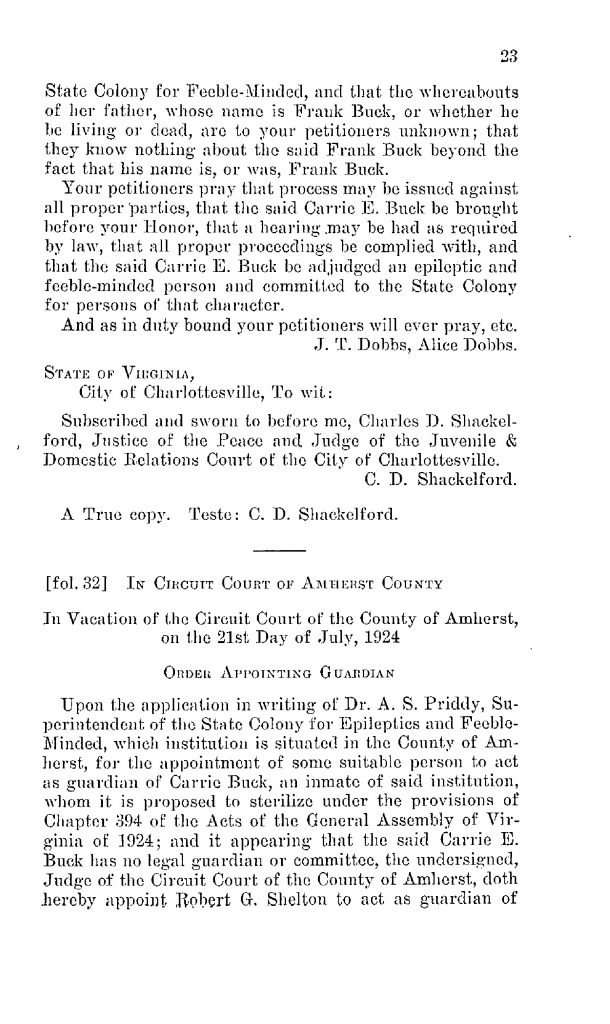 State Colony for Feeble-Minded, and that the whereabouts of her father, whose name is Frank Buck, or whether he be living or dead, are to your petitioners unknown; that they know nothing about the said Frank Buck beyond the fact that his name is, or was, Frank Buck.

Your petitioners pray that process may be issued against all proper parties, that the said Carrie E. Buck be brought before your Honor, that a hearing may be had as required by law, that all proper proceedings be complied with, and that the said Carrie E. Buck be adjudged an epileptic and feeble-minded person and committed to the State Colony for persons of that character.

And as in duty bound your petitioners will ever pray, etc.
J. T. Dobbs, Alice Dobbs