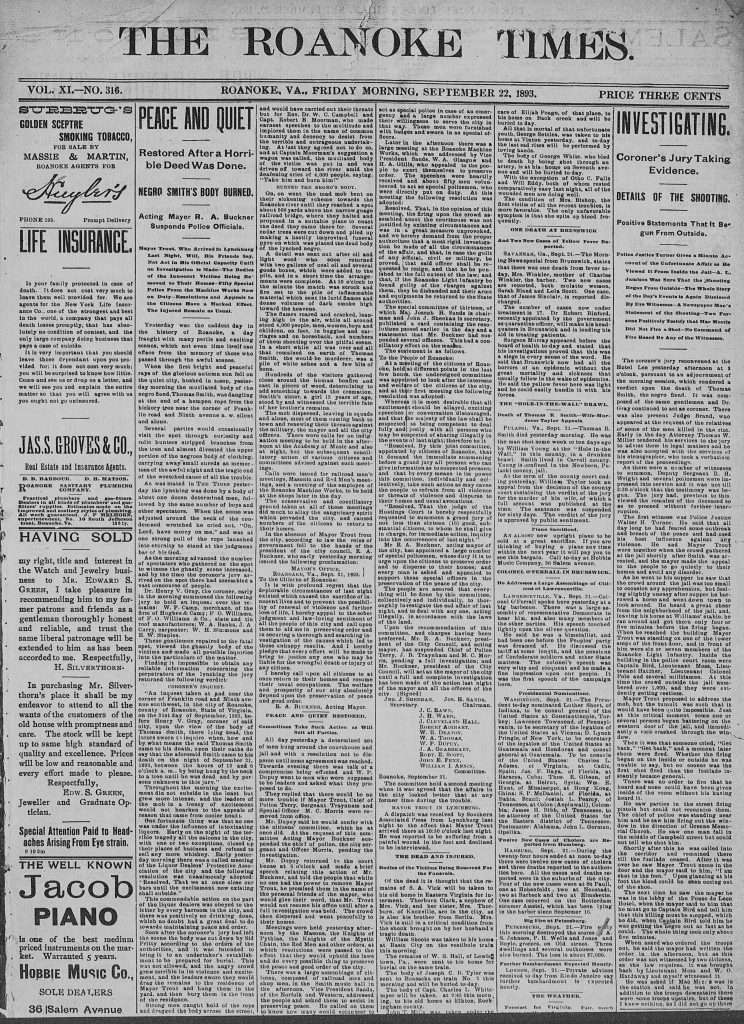 Restored After a Horrible Deed Was Done.

Mayor Trout, Who Arrived in Lynchburg Last Night, Will, His Friends Say, Not Act in His Official Capacity Until an Investigation is Made—The Bodies of the Innocent Victims Being Removed to Their Homes—Fifty Special Police From the Machine Works Now on Duty—Resolutions and Appeals to the Citizens Have a Marked Effect. The Injured Remain as Usual.

Yesterday was the saddest day in the history of Roanoke, a day fraught with many perils and exciting scenes, which not even time itself can efface from the memory of those who passed through the awful scenes.

When the first bright and peaceful rays of the glorious autumn sun fell on the quiet city, hushed in sleep, yesterday morning the mutilated body of the negro fiend, Thomas Smith, was dangling from the hickory tree near the corner of Franklin road and Ninth avenue n. w. silent and alone.

Several parties would occasionally visit the spot through curiosity and relic hunters stripped branches from the tree and almost divested the upper portion of the negroes body of clothing, carrying away small shreds as mementoes of the awful night and the tragic end of the wretched cause of all the trouble.

As was stated in The Times yesterday the lynching was done by a body of about one dozen determined men, followed by the same number of boys and other spectators. When the noose was adjusted around the neck of the condemned wretched he cried out, "Oh, Lord, have mercy on me," and was at one strong pull of the rope launched into eternity to stand at the judgment bar of his God.

As the morning advanced the number of spectators who gathered on the spot to witness the ghastly scene increased, and by the time the coroner's jury arrived on the spot there had assembled a vast concourse of people.

These gentlemen repaired to the fatal spot, viewed the ghastly body of the victims and made all possible inquiries into the particulars of the matter.

Finding it impossible to obtain any reliable information concerning the perpetrators of the lynching the jury returned the following verdict:

"An inquest taken at and near the corner of Franklin road and Ninth avenue southwest, in the city of Roanoke, county of Roanoke, State of Virginia, on the 21st day of September, 1893, before Henry V. Gray, coroner of said city, upon the view of the body of Thomas Smith, there lying dead, the jurors sworn to inquire when, how and by what means the said Thomas Smith came to his death, upon their oaths do say that the aforesaid Smith came to his death on the night of September 21, 1893, between the hours of 12 and 6 o'clock a. m., by being hung by the neck to a tree until he was dead and by persons unknown to the jury."

Throughout the morning the excitement did not subside in the least but grew more intense, and the leaders of the mob in a frenzy of excitement would not hearken to the appeals of reason that came from cooler heads.

One fortunate thing was that no one was under the influence of intoxicating liquors. Early on the night of the terrible tragedy all the saloons in the city, with one or two exceptions, closed up their places of business and refused to sell any more whiskey. Early yesterday morning there was a called meeting of the Liquor Dealers' Protective Association of the city and the following resolution was unanimously adopted: "Resolved, That we at once close our bars until the excitement now existing shall subside."

This commendable action on the part of the liquor dealers was obeyed to the letter by every barroom in the city, and there was positively no drinking done, which no doubt had a great deal to do towards maintaining peace and order.

Soon after the coroner's jury had left the scene the body was cut down by Sid Pritty according to the orders of the authorities, and it was intended to bring it to an undertaker's establishment to be prepared for burial. This was not allowed, and the angry crowd grew terrible in its violence and excitement, and the leaders swore they would drag the remains to the residence of Mayor Trout and hang them in the yard, and then bury them in the front of the residence.

Strong men caught hold of the rope and dragged the body across the street, and would have carried out their threats but for Rev. Dr. W. C. Campbell and Capt. Robert B. Moorman, who made earnest speeches to the multitude and implored them in the name of common humanity and decency to desist from the terrible and outrageous undertaking. At last they agreed not to do so, and at Captain Moorman's suggestion a wagon was called, the mutilated body of the victim was put in and was driven off toward the river amid the deafening cries of 4,000 people, saying, "Take him and burn him!"

On, on went the mad mob bent on their sickening scheme towards the Roanoke river until they reached a spot about 500 yards above the narrow guage [sic] railroad bridge, where they halted and proposed in a suitable place to enact the deed they came there for. Several cedar trees were cut down and piled up making a hastily improvised funeral pyre on which was placed the dead body of the lynched negro.

A detail was sent out after oil and light wood who soon returned with two gallons of coal oil and several goods boxes, which were added to the pile, and in a short time the arrangements were complete. At 10 o'clock to the minute the match was struck and fire set to the pile of inflammable material which sent its lurid flames and dense volumes of dark smoke high toward the heavens.

The flames roared and cracked, leaping high in the air, while all around stood 4,000 people, men, women, boys and children, on foot, in buggies and carriages and on horseback, and numbers of them shouting over the pitiful scene. In a short while all was over and all that remained on earth of Thomas Smith, the would-be murderer, was a pile of white ashes and a few bits of bone.

Hundreds of the visitors gathered close around the human bonfire and cast in pieces of wood, determining to add something towards the cremation. Smith's sister, a girl 15 years of age, stood by and witnessed the terrible fate of her brother's remains.

The mob dispersed, leaving in squads and alone, most of them coming back to town and renewing their threats against the military, the mayor and all the city officers. There were calls for an indignation meeting to be held in the afternoon at the Academy of Music and also at night, but the subsequent conciliatory action of various citizens and committees advised against such meetings.

Calls were issued for railroad men's meetings, Masonic and Red Men's meetings, and a meeting of the employes [sic] of the Roanoke Machine Works, to be held at the shops later in the day.

The conservative and conciliatory ground taken at all of these meetings did much to allay the sanguinary spirit which pervaded the city, and caused numbers of the citizens to return to their homes.

In the absence of Mayor Trout from the city, according to law the reins of the government fell to the hands of the president of the city council, R. A. Buckner, who early yesterday morning issued the following proclamation:

To the Citizens of Roanoke:

It is with profound regret that the deplorable circumstances of last night existed which caused the sacrifice of innocent lives and to prevent the possibility of renewal of violence and further loss of life, I hereby appeal to the sober judgment and law-loving sentiment of all the people of this city and call upon them to aid me in preserving order and in securing a thorough and searching investigation of the causes which led to those unhappy results. And I hereby pledge that every effort will be made to bring to justice any one who may be liable for the wrongful death or injury of any citizen.

I hereby call upon all citizens to at once return to their homes and resume their usual occupations. The welfare and prosperity of our city absolutely depend upon the preservation of peace and good order.