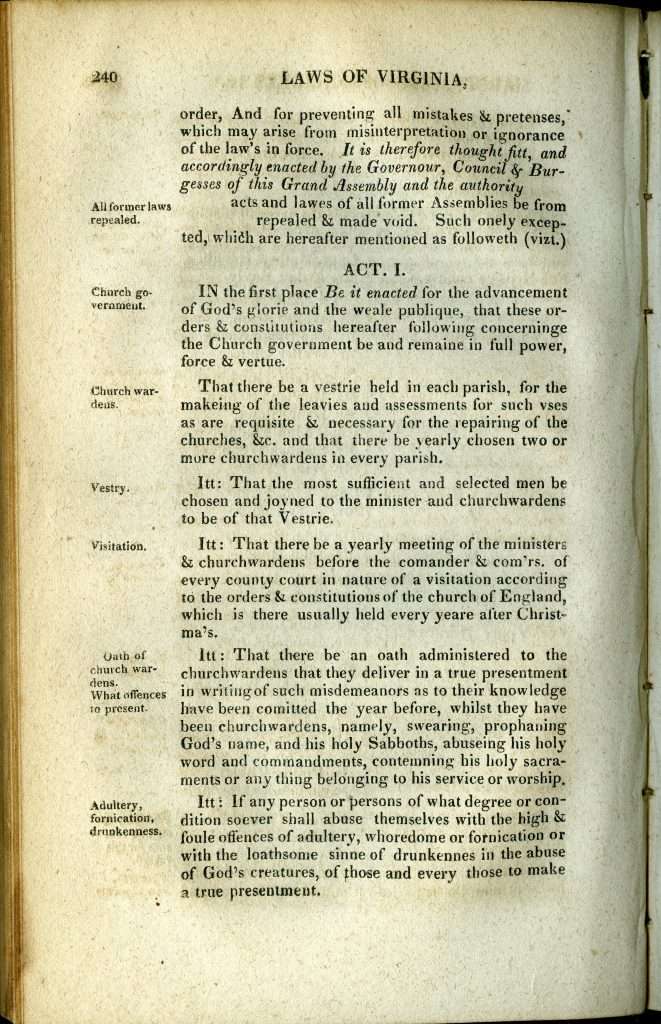 IN the first place Be it enacted for the advancement of God’s glorie and the weale publique, that these orders & constitutions hereafter following concerninge the Church government be and remaine in full power, force & vertue.

That there be a vestrie held in each parish, for the makeing of the leavies and assessments for such uses as are requisite & necessary for the repairing of the churches, &c. and that there be yearly chosen two or more churchwardens in every parish.

Itt: That the most sufficient and selected men be chosen and joyned to the minister and churchwardens to be of that Vestrie.

Itt: That there be a yearly meeting of the ministers & churchwardens before the comander & com’rs. of every county court in nature of a visitation according to the orders & constitutions of the church of England, which is there usually held every yeare after Christma’s.

Itt: That there be an oath administered to the churchwardens that they deliver in a true presentment in writing of such misdemeanors as to their knowledge have been comitted the year before, whilst they have been churchwardens, namely, swearing, prophaning God’s name, and his holy Sabboths, abuseing his holy word and commandments, contemning his holy sacraments or any thing belonging to his service or worship.

Itt: If any person or persons of what degree or condition soever shall abuse themselves with the high & foule offences of adultery, whoredome or fornication or with the loathsome sinne of drunkennes in the abuse of God’s creatures, of those and every those to make a true presentment. 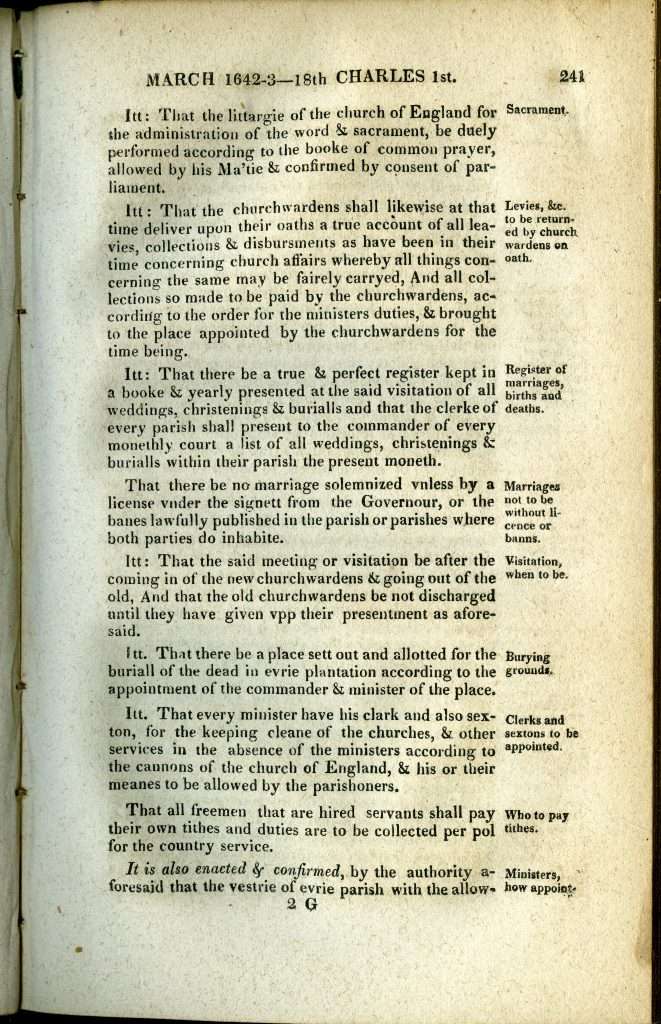 Itt: That the littargie of the church of England for the administration of the word & sacrament, be duely performed according to the booke of common prayer, allowed by his Ma’tie & confirmed by consent of parliament.

That there be no marriage solemnized unless by a license under the signett from the Governour, or the banes lawfully published in the parish or parishes where both parties do inhabite.

Itt: That the said meeting or visitation be after the coming in of the new churchwardens & going out of the old, And that the old churchwardens be not discharged until they have given upp their presentment as aforesaid.

Itt. That there be a place sett out and allotted for the buriall of the dead in evrie plantation according to the appointment of the commander & minister of the place.

Itt. That every minister have his clark and also sexton, for the keeping cleane of the churches, & other services in the absence of the ministers according to the cannons of the church of England, & his or their meanes to be allowed by the parishoners.

That all freemen that are hired servants shall pay their own tithes and duties are to be collected per pol for the country service.

It is also enacted & confirmed, by the authority aforesaid that the vestrie of evrie parish with the allow- 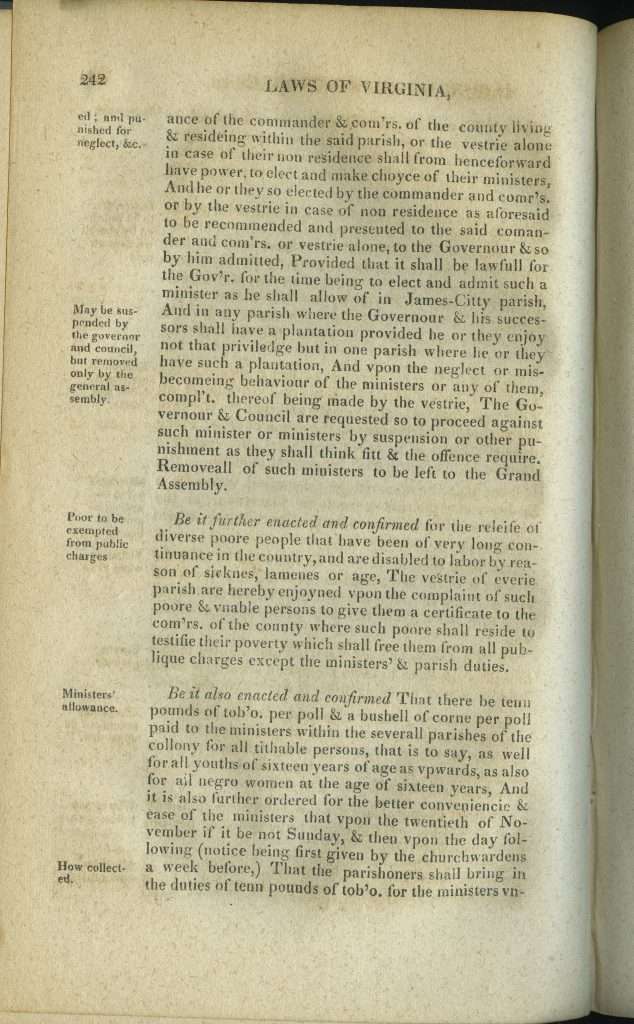 ance of the commander & com’rs. of the county living & resideing within the said parish, or the vestrie alone in case of their non residence shall from henceforward have power, to elect and make choyce of their ministers, And he or they so elected by the commander and comr’s. or by the vestrie in case of non residence as aforesaid to be recommended and presented to the said comander and com’rs. or vestrie alone, to the Governour & so by him admitted, Provided that it shall be lawfull for the Gov’r. for the time being to elect and admit such a minister as he shall allow of in James-Citty parish, And in any parish where the Governour & his successors shall have a plantation provided he or they enjoy not that priviledge but in one parish where he or they have such a plantation, and upon the neglect or misbecomeing behaviour of the minsters or any of them, compl’t. thereof being made by the vestrie, The Governour & Council are requested so to proceed against such minister or ministers by suspension or other punishment as they shall think fitt & the offence require. Removeall of such ministers to be left to the Grand Assembly.

Be it further enacted and confirmed for the releife of diverse poore people that have been of very long continuance in the country, and are disabled to labor by reason of sicknes, lamenes or age, The vestrie of everie parish are hereby enjoyned upon the complaint of such poore & vnable persons to give them a certificate to the com’rs. of the county where such poore shall reside to testifie their poverty which shall free them from all publique charges except the ministers’ & parish duties.

Be it also enacted and confirmed That there be tenn pounds of tob’o. per poll & a bushell of corne per poll paid to the ministers within the severall parishes of the collony for all tithable persons, that is to say, as well for all youths of sixteen years of age as vpwards, as also for all negro women at the age of sixteen years, And it is also further ordered for the better conveniencie & ease of the ministers that upon the twentieth of November if it be nos Sunday, & then vpon the day following (notice being first given by the churchwardens a week before,) That the parishoners shall bring in the duties of tenn pounds of tob’o. for the ministers un- 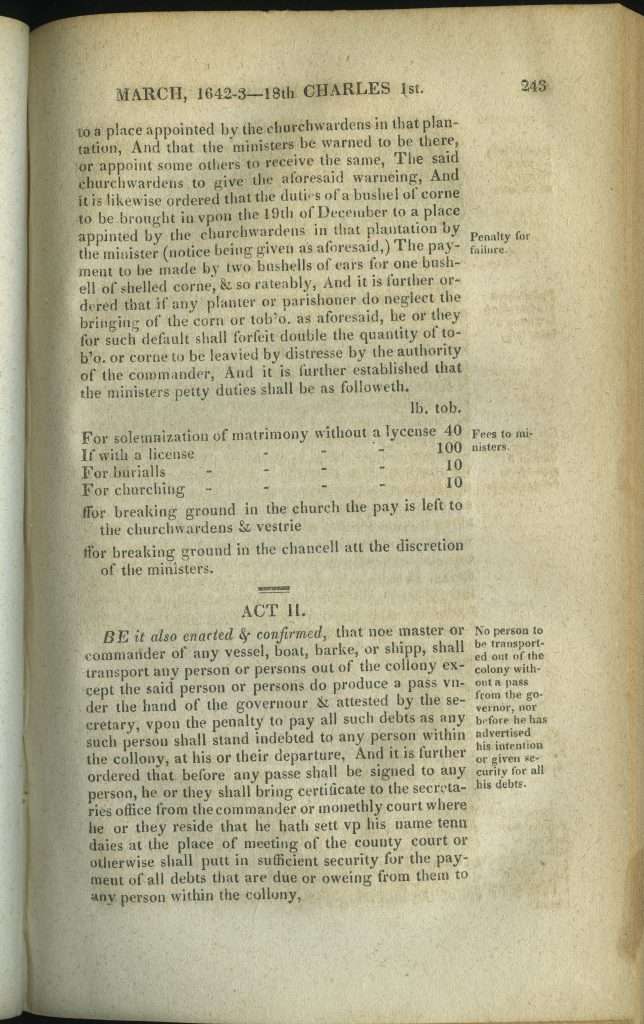 to a place appointed by the churchwardens in that plantation, And that the ministers be warned to be there, or appoint some others to receive the same, The said churchwardens to give the aforesaid warneing, And it is likewise ordered that the duties of a bushel of corne to be brought in vpon the 19th of December to a place appinted by the churchwardens in that plantation by the minister (notice being given as aforesaid,) The payment to be made by two bushells of ears for one bushell of shelled corne, & so rateably, And it is further ordered that if any planter or parishoner do neglect the bringing of the corn or tob’o. as aforesaid, he or they for such default shall forfeit double the quantity of tob’o. or corne to be leavied by distresse by the authority of the commander, And it is further established that the ministers petty duties shall be as followeth.

lb. tob. For solemnization of matrimony without a lycense 40 If with a license100 For burials10 For churching10

ffor breaking ground in the chancell att the discretion of the ministers.