Some scholars believe that the Pamunkey have occupied their tribal area for 10,000 to 12,000 years. By 1607, when the first English settlers founded Jamestown, the Pamunkey lived in towns and villages along the Pamunkey River. They spoke a dialect of Algonquian and were one of the six core tribes of Tsenacomoco, a political alliance of Algonquian-speaking tribes that in 1607 was ruled by Powhatan. Powhatan likely appointed his younger brother or cousin Opechancanough as the weroance, or chief, of the Pamunkey.

As part of Tsenacomoco, the Pamunkey were involved in the periods of hostility between the English and Indian communities that are now known as the First (1609–1614), Second (1622–1632), and Third (1644–1646) Anglo-Powhatan Wars. Opechancanough, who by 1630 had become the paramount chief of Tsenacomoco, launched the attacks that initiated the second and third conflicts. The 1646 peace treaty that ended the Third Anglo-Powhatan War set aside land for Virginia Indians, including the Pamunkey, in the Pamunkey Neck area of present-day King William County. This is the same land on which the Pamunkey reside today. The treaty also established a tradition of paying yearly tribute to the Virginia governor—a tradition that continued into the early twenty-first century. (The fourth Wednesday of November is set aside for presentations of fish and game at the Virginia State Capitol or Executive Mansion in Richmond.) 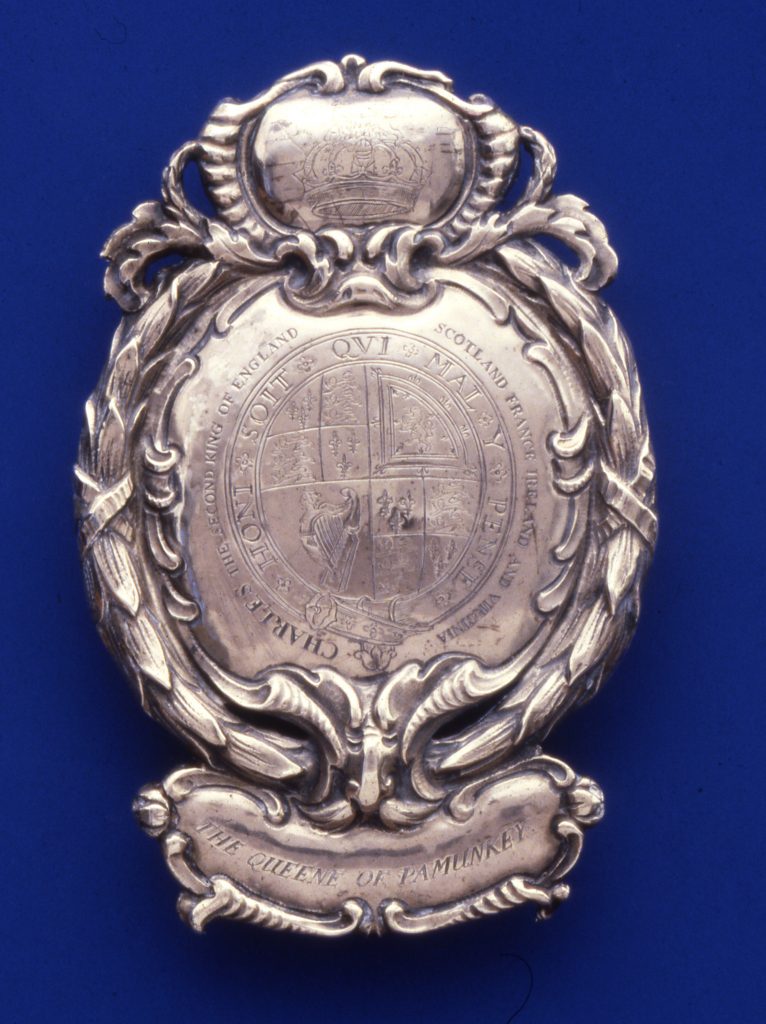 In the 1670s, the Pamunkey weroansqua, or female chief, Cockacoeske worked with the colonial government to secure rights for her people. In 1676, Nathaniel Bacon and his followers attacked the Pamunkey, captured some tribal members, and killed others. That summer, Cockacoeske met with a committee of burgesses and members of the governor’s Council in Jamestown to offer additional men to defend the colony against frontier tribes and to remind the politicians of the Pamunkey warriors who had been killed fighting alongside the colonists. In February 1677 she asked the General Assembly to release those who had been taken captive and to restore Pamunkey property. On May 29, 1677, Cockacoeske signed a treaty, published in London as the Articles of Peace, in which she, on behalf of several tribes united under her authority, swore allegiance to the Crown, including an annual tribute of game, in exchange for hunting rights, access to civil courts, and ownership of land within a three-mile radius of any Indian town. Cockacoeske’s successor, Ann, also fought for her people’s rights. As the European population expanded into their tribal lands, she and the “Great Men of the Pamunkey” submitted petitions to the colonial government asking the English to confirm Pamunkey ownership of tribal lands, remove squatters, and reduce the annual tribute to the Crown.

Efforts to preserve and protect the Pamunkey Indian Reservation extended through the eighteenth century, when many of the tribal groups lost their land, and into the late nineteenth century, when each of the four remaining reservation tribes—the Gingaskin, Mattaponi, Nottoway, and Pamunkey—was pressured to dissolve its reservation, ending its relationship to the state, and then to divide the land among its members. The Pamunkey refused, maintaining their reservation, church, and school.

Like other Virginia Indians, the Pamunkey struggled to preserve their identity and culture early in the twentieth century. The Racial Integrity Act of 1924 and subsequent legislation banned interracial marriage in Virginia and asked for voluntary racial identifications on birth and marriage certificates. “White” was defined as having no trace of African ancestry, while all other people, including Indians, were defined as “colored.” To accommodate elite Virginians who claimed Pocahontas and John Rolfe as ancestors, the law allowed for those who had “one-sixteenth or less of the blood of the American Indian and have no other non-Caucasic blood [to] be deemed to be white persons.” The laws essentially erased Virginia Indians as a category of people under the law. The U.S. Supreme Court declared the Racial Integrity Act unconstitutional in Loving v. Virginia (1967). 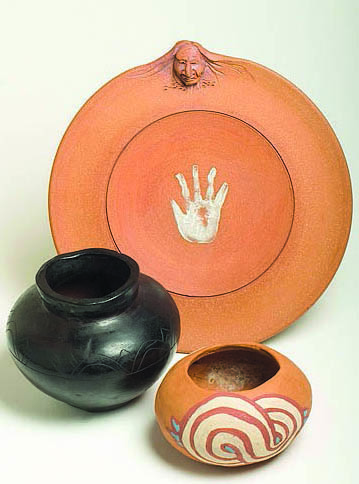 By late in the century, the tribes had reasserted their identities. In 1979, with help from a federal grant, the Pamunkey tribe opened the Pamunkey Indian Museum. The museum is located on the reservation; its collection includes stone tools, arrowheads, and pottery, a craft practiced consistently by the Pamunkey since before the colonial era. On March 25, 1983, Virginia Joint Resolution 54 formally recognized the Pamunkey tribe, along with the Chickahominy, Eastern Chickahominy, Mattaponi, Rappahannock, and Upper Mattaponi tribes. (The Nansemond and Monacan tribes were recognized in 1985 and 1989, respectively.)

In 2009, the U.S. government opened the petition process from the Pamunkey tribe for federal recognition. After an investigation into tribal laws and practices—including a law the tribe removed in 2012 that banned interracial marriage—the U.S. Department of Interior granted the Pamunkey Indian tribe federal recognition on July 2, 2015, stating, “The Pamunkey Indian Tribe has occupied a land base in southeastern King William County, Virginia—shown on a 1770 map as ‘Indian Town’—since the Colonial Era in the 1600s.” Federally recognized Indian tribes receive access to services from the U.S. Bureau of Indian Affairs, including medical, housing, and educational benefits.

The Pamunkey tribe maintains its own laws and its own governing body, which consists of a chief and seven council members. The positions are elected, but voluntary; councilors are not paid. Elections for the chief and council are held every four years. Votes are cast in the traditional manner, using a basket, peas, and corn kernels. On election night, the basket is passed for each candidate; every voter places in it either a pea, indicating a vote against the candidate, or a corn kernel, indicating a vote in favor. The peas and corn kernels are tallied for each candidate; the person with the most corn is elected. The chief is elected first, followed by the seven councilors.

RELATED CONTENT
Categories:
MAP
TIMELINE
March—April 1614
Samuel Argall assists Sir Thomas Dale, the deputy governor of Virginia, in negotiating a peace with the Pamunkey and Chickahominy tribes of Virginia Indians.
October 1646
The General Assembly confirms the Treaty of Peace with Necotowance, a peace treaty ending the Third Anglo-Powhatan War and creating Native tributaries.
1656
After her husband, Totopotomoy, is killed while assisting the colonists in frontier defense against Indian foes, Cockacoeske succeeds him and becomes chief of the Pamunkey.
Summer 1676
Cockacoeske appears before a committee of burgesses and Council members in Jamestown to discuss how many warriors she could provide to defend the colony against frontier tribes. She gives a speech describing the deaths of Pamunkey warriors killed fighting alongside the colonists.
August 4, 1676
Thirty additional Virginia men endorse a more radical declaration of grievance from Nathaniel Bacon, who demands a new assembly be chosen under his authority rather than recalling the one that met in June. Bacon then marches to the lower Rappahannock River and attacks the friendly Pamunkey Indians.
February 1677
Cockacoeske asks the General Assembly for the release of Pamunkey who had been taken captive and for the restoration of Pamunkey property. The royal commissioners conclude that Cockacoeske should be rewarded for her notable loyalty to the English.
May 29, 1677
Cockacoeske signs the Treaty of Middle Plantation, and at her request several tribes are reunited under her authority. But having been free of Powhatan domination since 1646, the Chickahominy and Rappahannock stubbornly refuse to become subservient to her or to pay tribute.
October 22, 1701
A petition requesting the confirmation of a sale of Pamunkey land to English subjects is submitted to the General Court bearing the mark and the name "Mrs. Betty, the Queen." It is thought that Mrs. Betty and Ann, the niece who succeeded the Pamunkey chief Cockacoeske, are the same person.
March 20, 1924
Governor E. Lee Trinkle signs "An act to Preserve Racial Integrity," a law aimed at protecting whiteness on the state level. It prohibits interracial marriage, defines a white person as someone who has no discernible non-white ancestry, and requires that birth and marriage certificates indicate people's races.
March 4, 1930
Governor John Garland Pollard signs into law a bill that would redefine a "colored person" as having any "negro blood."
1979
The Pamunkey Indian Museum opens. It is located on the Pamunkey Reservation in King William County.
March 25, 1983
Virginia Joint Resolution 54 extends official state recognition to the Chickahominy tribe, the Eastern Chickahominy tribe, the United Rappahannock tribe, and the Upper Mattaponi tribe. Although Virginia had recognized the Pamunkey and Mattaponi tribes since colonial times, that past recognition was acknowledged by this resolution.
July 2, 2015
The U.S. Department of the Interior grants official federal recognition to the Pamunkey tribe.
FURTHER READING
CITE THIS ENTRY