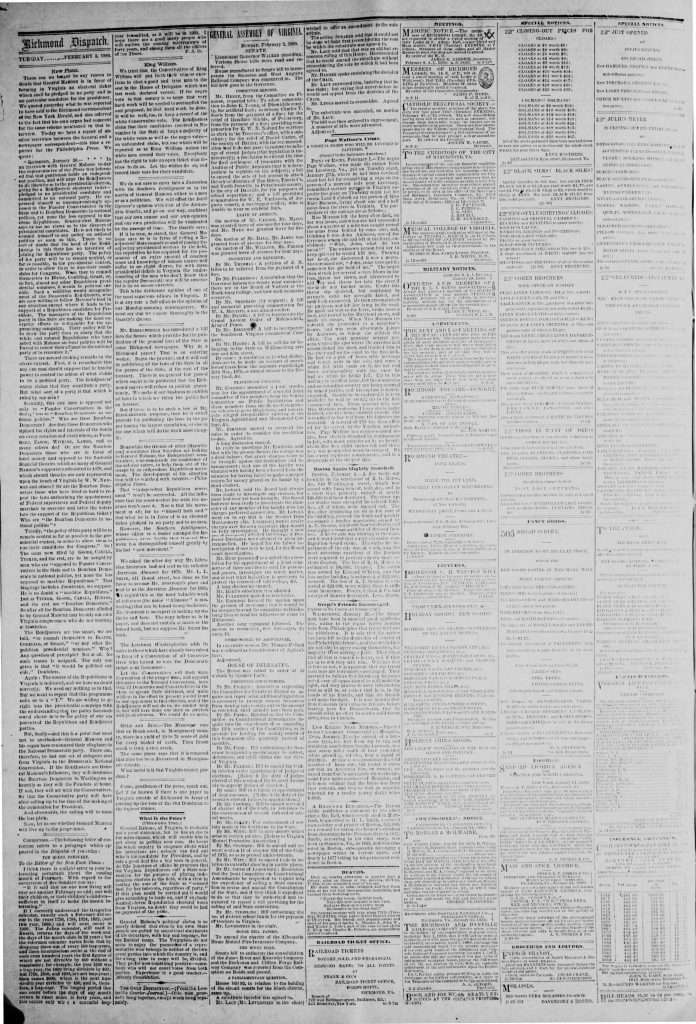 a virginia negro who will be lynched if captured.

[Special to the Baltimore American.]

Point of Rocks, February 1.—The negro Page Wallace, who made his escape from the Leesburg, Va., jail on Tuesday night, January 27th, where he had been confined since last fall for committing a rape on the person of a married lady near Leesburg, committed another outrage in Virginia opposite this place on Thursday night last between 7 and 8 o'clock on the person of Miss Mary Morman, living about one and a half miles from the river in Virginia. The particulars of the outrage are as follows:

Miss Morman left the ferry after dark, on her way home, and when she had proceeded about a quarter of a mile was caught round the arms from behind by some one, and, thinking it was John Ambrose, one of the ferrymen whom she had left at the ferry, exclaimed: "Why, John, what do you mean!" The unknown person told her to keep quiet or he would kill her. Turning her head, she discovered it was a negro. She screamed out, "John, come here quick; some one has got hold of me." The negro then struck her several severe blows in the face, threw her down, and threatened to kill her and throw her into the river if she made any further noise. Under this threat she desisted, but continued to struggle until her strength failed, and sank back exhausted. He then accomplished his purpose, and left her lying in the road. He made his way to the ferry, broke loose a boat, and rowed to the Maryland shore, and made his escape. When Miss Morman recovered she proceeded to a neighbor's house, and was soon afterwards joined by Ambrose, to whom she related the affair. The next morning several persons visited the spot where the ravisher had accomplished his deed, and tracked him to the river and up the canal to the first lock. He had on a pair of boots with heel-taps and rough nails in the sole, and wore a white hat with spots on it, his hat and boots corresponding with the ones he had on when he broke jail. Up to this writing he is still at large, but the mountains and surrounding country are being scoured by armed parties, and his capture is hourly expected. Should he be captured it is very probable he will be swung up to the first convenient tree. From persons who saw Miss Morman yesterday I learn she is badly bruised, one eye being entirely closed. She is confined to her bed from the injuries she received. A reward of $50 has been offered for his arrest by the Virginia authorities. Page Wallace is a copper-colored negro, face slightly bleached by confinement in jail, with many pimples on it; no beard; about five fee eight inches tall and thick set; was poorly clad when he escaped. He has a very repulsive countenance, and is a desperado of the deepest dye.