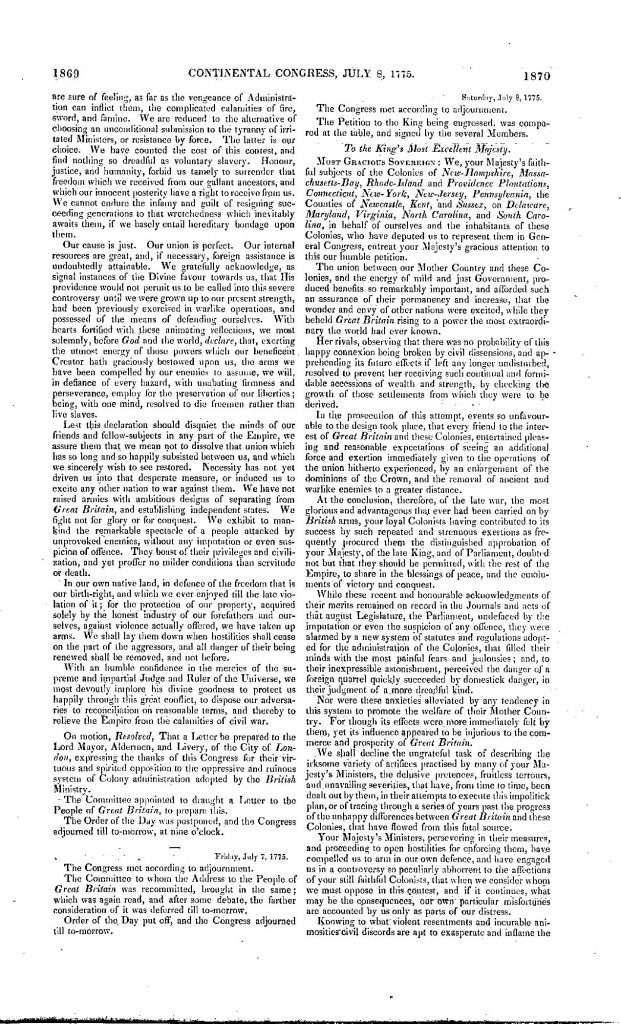 To the King’s Most Excellent Majesty.

Most Gracious Sovereign: We, your Majesty’s faithful subjects of the Colonies of New-Hampshire, Massachusetts-Bay, Rhode-Island and Providence Plantations, Connecticut, New-York, New-Jersey, Pennsylvania, the Counties of Newcastle, Kent, and Sussex, on Delaware, Maryland, Virginia, North Carolina, and South Carolina, in behalf of ourselves and the inhabitants of these Colonies, who have deputed us to represent them in General Congress, entreat your Majesty’s gracious attention to this our humble petition.

The union between our Mother Country and these Colonies, and the energy of mild and just Government, produced benefits so remarkably important, and afforded such an assurance of their permanency and increase, that the wonder and envy of other nations were excited, while they beheld Great Britain rising to a power the most extraordinary the world had ever known.

Her rivals, observing that there was no probability of this happy connexion being broken by civil dissensions, and apprehending its future effects if left any longer undisturbed, resolved to prevent her receiving such continual and formidable accessions of wealth and strength, by checking the growth of those settlements from which they were to be derived.

In the prosecution of this attempt, events so unfavourable to the design took place, that every friend to the interest of Great Britain and these Colonies, entertained pleasing and reasonable expectations of seeing an additional force and exertion immediately given to the operations of the union hitherto experienced, by an enlargement of the dominions of the Crown, and the removal of ancient and warlike enemies to a greater distance.

At the conclusion, therefore, of the late war, the most glorious and advantageous that ever had been carried on by British arms, your loyal Colonists having contributed to its success by such repeated and strenuous exertions as frequently procured them the distinguished approbation of your Majesty, of the late King, and of Parliament, doubted not but that they should be permitted, with the rest of the Empire, to share in the blessings of peace, and the emoluments of victory and conquest.

While these recent and honourable acknowledgments of their merits remained on record in the Journals and acts of that august Legislature, the Parliament, undefaced by the imputation or even the suspicion of any offence, they were alarmed by a new system of statutes and regulations adopted for the administration of the Colonies, that filled their minds with the most painful fears and jealousies; and, to their inexpressible astonishment, perceived the danger of a foreign quarrel quickly succeeded by domestick danger, in their judgment of a more dreadful kind.

Nor were these anxieties alleviated by any tendency in this system to promote the welfare of their Mother Country. For though its effects were more immediately felt by them, yet its influence appeared to be injurious to the commerce and prosperity of Great Britain.

We shall decline the ungrateful task of describing the irksome variety of artifices practised by many of your Majesty’s Ministers, the delusive pretences, fruitless terrours, and unavailing severities, that have, from time to time, been dealt out by them, in their attempts to execute this impolitick plan, or of tracing through a series of years past the progress of the unhappy differences between Great Britain and these Colonies, that have flowed from this fatal source.

Your Majesty’s Ministers, persevering in their measures, and proceeding to open hostilities for enforcing them, have compelled us to arm in our own defence, and have engaged us in a controversy so peculiarly abhorrent to the affections of your still faithful Colonists, that when we consider whom we must oppose in this contest, and if it continues, what may be the consequences, our own particular misfortunes are accounted by us only as parts of our distress. 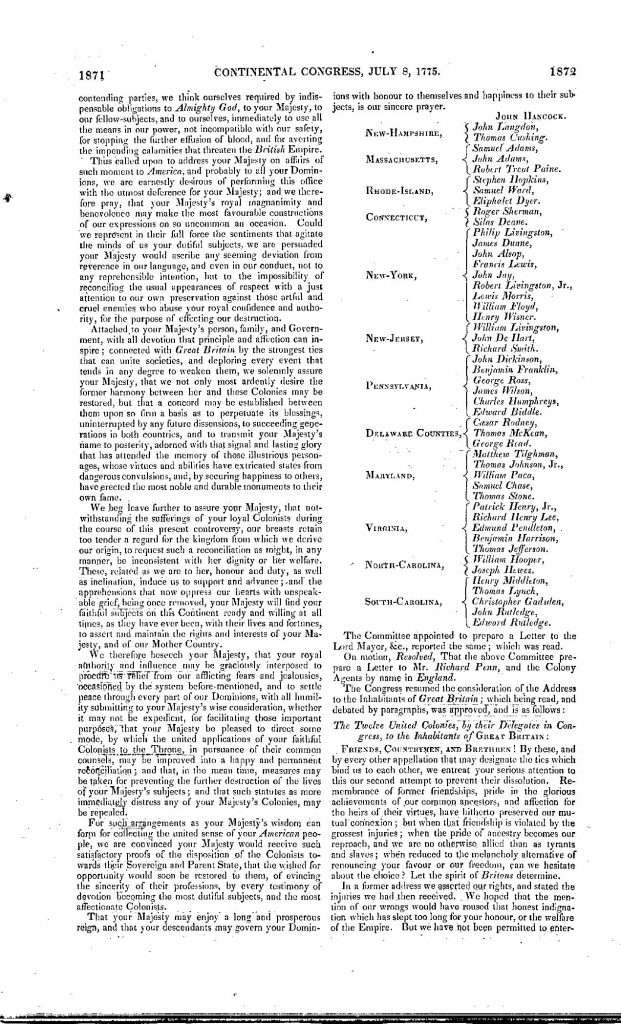 contending parties, we think ourselves required by indispensable obligations to Almighty God, to your Majesty, to our fellow-subjects, and to ourselves, immediately to use all the means in our power, not incompatible with our safety, for stopping the further effusion of blood, and for averting the impending calamities that threaten the British Empire.

Thus called upon to address your Majesty on affairs of such moment to America, and probably to all your Dominions, we are earnestly desirous of performing this office with the utmost deference for your Majesty; and we therefore pray, that your Majesty’s royal magnanimity and benevolence may make the most favourable constructions of our expressions on so uncommon an occasion. Could we represent in their full force the sentiments that agitate the minds of us your dutiful subjects, we are persuaded your Majesty would ascribe any seeming deviation from reverence in our language, and even in our conduct, not to any reprehensible intention, but to the impossibility of reconciling the usual appearances of respect with a just attention to our own preservation against those artful and cruel enemies who abuse your royal confidence and authority, for the purpose of effecting our destruction.

Attached to your Majesty’s person, family, and Government, with all devotion that principle and affection can inspire; connected with Great Britain by the strongest ties that can unite societies, and deploring every event that tends in any degree to weaken them, we solemnly assure your Majesty, that we not only most ardently desire the former harmony between her and these Colonies may be restored, but that a concord may be established between them upon so firm a basis as to perpetuate its blessings, uninterrupted by any future dissensions, to succeeding generations in both countries, and to transmit your Majesty’s name to posterity, adorned with that signal and lasting glory that has attended the memory of those illustrious personages, whose virtues and abilities have extricated states from dangerous convulsions, and, by securing happiness to others, have erected the most noble and durable monuments to their own fame.

We beg leave further to assure your Majesty, that notwithstanding the sufferings of your loyal Colonists during the course of this present controversy, our breasts retain too tender a regard for the kingdom from which we derive our origin, to request such a reconciliation as might, in any manner, be inconsistent with her dignity or her welfare. These, related as we are to her, honour and duty, as well as inclination, induce us to support and advance; and the apprehensions that now oppress our hearts with unspeakable grief, being once removed, your Majesty will find your faithful subjects on this Continent ready and willing at all times, as they have ever been, with their lives and fortunes, to assert and maintain the rights and interests of your Majesty, and of our Mother Country.

We therefore beseech your Majesty, that your royal authority and influence may be graciously interposed to procure us relief from our afflicting fears and jealousies, occasioned by the system before-mentioned, and to settle peace through every part of our Dominions, with all humility submitting to your Majesty’s wise consideration, whether it may not be expedient, for facilitating those important purposes, that your Majesty be pleased to direct some mode, by which the united applications of your faithful Colonists to the Throne, in pursuance of their common counsels, may be improved into a happy and permanent reconciliation; and that, in the mean time, measures may be taken for preventing the further destruction of the lives of your Majesty’s subjects; and that such statutes as more immediately distress any of your Majesty’s Colonies, may be repealed.

For such arrangements as your Majesty’s wisdom can form for collecting the united sense of your American people, we are convinced your Majesty would receive such satisfactory proofs of the disposition of the Colonists towards their Sovereign and Parent State, that the wished for opportunity would soon be restored to them, of evincing the sincerity of their professions, by every testimony of devotion becoming the most dutiful subjects, and the most affectionate Colonists.

That your Majesty may enjoy a long and prosperous reign, and that your descendants may govern your Dominions with honour to themselves and happiness to their subjects, is our sincere prayer.

RELATED CONTENT
Categories:
Type:
FURTHER READING
“By the King, A Proclamation, For Suppressing Rebellion and Sedition” (1775)
CITE THIS ENTRY