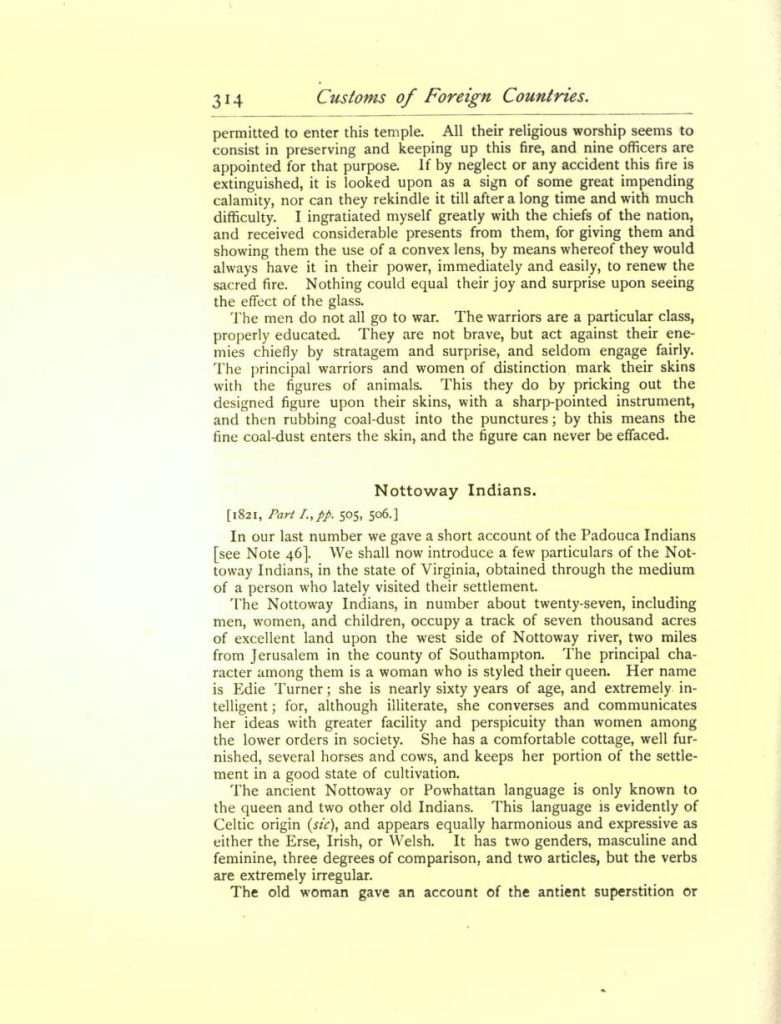 In our last number we gave a short account of the Padouca Indians. We shall now introduce a few particulars of the Nottoway Indians, in the state of Virginia, obtained through the medium of a person who lately visited their settlement.

The Nottoway Indians, in a number about twenty-seven, including men, women, and children, occupy a track of seven thousand acres of excellent land upon the west side of Nottoway river, two miles from Jerusalem in the county of Southampton The principal character among them is a woman who is styled their queen. Her name is Edie Turner; she is nearly sixty years of age, and extremely intelligent; for, although illiterate, she converses and communicates her ideas with great facility and perspicuity than women among the lower orders in society. She has a comfortable cottage, well furnished, several horses and cows, and keeps her portion of the settlement in a good state of cultivation.

The ancient Nottoway or Powhattan language is only known to the queen and two other old Indians. This language is evidently of Celtic origin (sic), and appears equally harmonious and expressive as either the Erse, Irish, or Welsh. It has two genders, masculine and feminine, three degrees of comparison, and two articles, but the verbs are extremely irregular.

The old woman gave an account of the antient superstition or 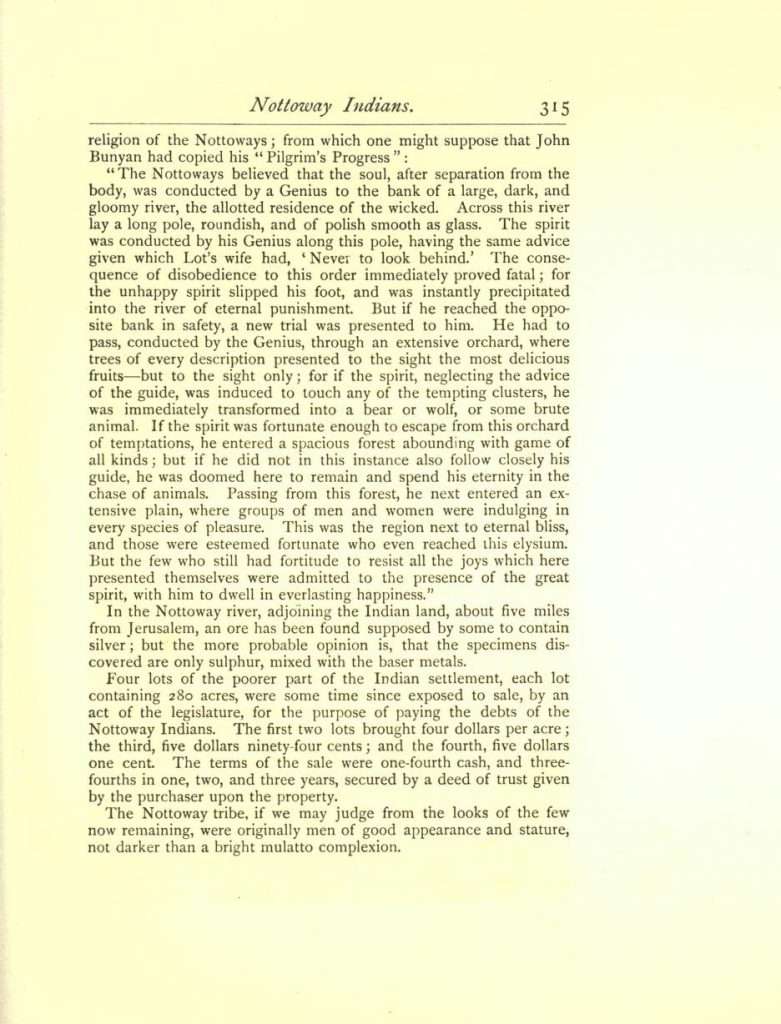 religion of the Nottoways; from which one might suppose that John Bunyan had copied his “Pilgrim’s Progress”:

“The Nottoways believed that the soul, after separation from the body, was conducted by a Genius to the bank of a large, dark, and gloomy river, the allotted residence of the wicked. Across this river lay a long pole, roundish, and of polish smooth as glass. The spirit was conducted by his Genius along this pole, having the same advice given which Lot’s wife had, ‘Never to look behind.’ The consequence of disobedience to this order immediately proved fatal; for the unhappy spirit slipped his foot, and was instantly precipitated into the river of eternal punishment. But if he reached the opposite bank in safety, a new trial was presented to him. He had to pass, conducted by the Genius, through an extensive orchard, where trees of every description presented to the sight the most delicious fruits—but to the sight only; for if the spirit, neglecting the advice of the guide, was induced to touch any of the tempting clusters, he was immediately transformed into a bear or wolf, or some brute animal. If the spirit was fortunate enough to escape from this orchard of temptations, he entered a spacious forest abounding with game of all kinds; but if he did not in this instance also follow closely his guide, he was doomed here to remain and spend his eternity in the chase of animals. Passing from this forest, he next entered an extensive plain, where groups of men and women were indulging in every species of pleasure. This was the region next to eternal bliss, and those were esteemed fortunate who even reached this elysium. But the few who still had fortitude to resist all the joys which here presented themselves were admitted to the presence of the great spirit, with him to dwell in everlasting happiness.”

In the Nottoway river, adjoining the Indian land, about five miles from Jerusalem, an ore has been found supposed by some to contain silver; but the more probable opinion is, that the specimens discovered are only sulphur, mixed with the baser metals.

Four lots of the poorer part of the Indian settlement, each lot containing 280 acres, were some time since exposed to sale, by an act of the legislature, for the purpose of paying the debts of the Nottoway Indians. The first two lots brought four dollars per acre; the third, five dollars ninety-four cents; and the fourth, five dollars one cent. The terms of the sale were one-fourth cash, and three-fourths in one, two, and three years, secured by a deed of trust given by the purchaser upon the property.

The Nottoway tribe, if we may judge from the looks of the few now remaining, were originally men of good appearance and stature, not darker than a bright mulatto complexion.