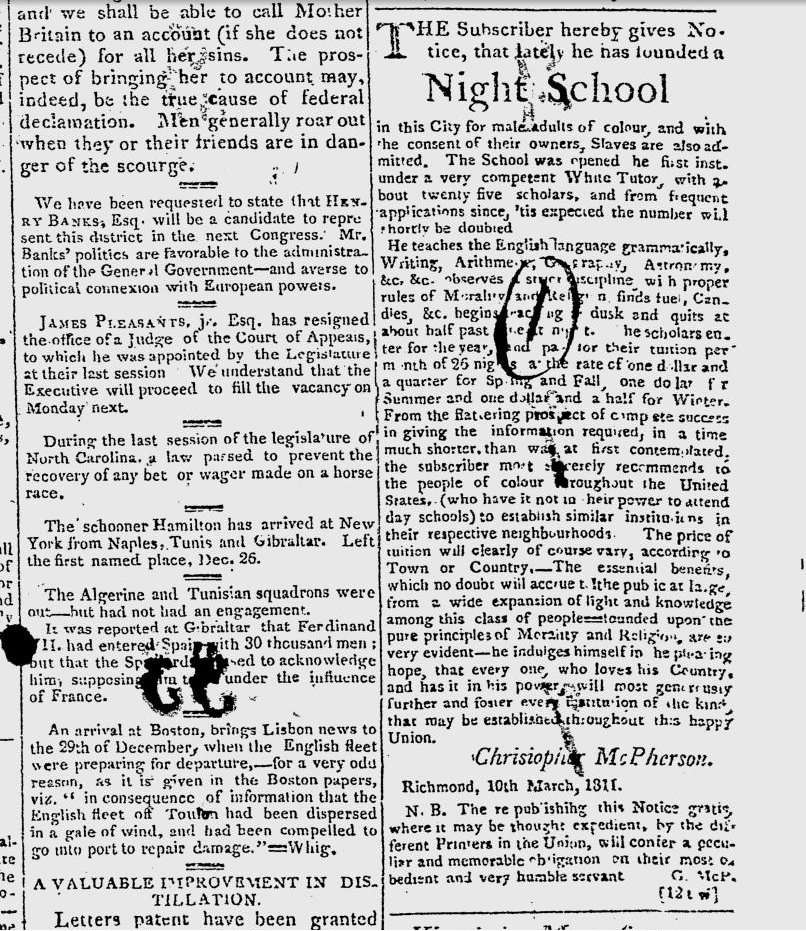 THE Subscriber hereby gives Notice, that lately he has founded a

In this City for male adults of colour, and with the consent of their owners, Slaves are also admitted. The School was opened the first inst. under a very competent White Tutor, with about twenty five scholars, and from frequent applications since, ’tis expected the number will shortly be doubled.

He teaches the English language grammatically, Writing, Arithmetic, Geography, Astronomy, &c. c. observes a strict discipline, with proper rules of Morality and Religion, finds fuel, Candles, &c. begins teaching at dusk and quits about half past [illegible] at night. The scholars enter for the year, and pay for their tuition per month of 25 nights at the rate of one dollar and a quarter for Spring and Fall, and one dollar for Summer and one dollar and a half for Winter. From the flattering prospect of complete success in giving the information required, in a time much shorter than was at first contemplated, the subscriber most sincerely recommends to the people of colour throughout the United States (who have it not to their power to attend day schools) to establish similar institutions in their respective neighbourhoods. The price of tuition will clearly of course vary, according to Town or Country.—The essential benefits which no doubt will accrue the public at large from a wide expansion of light and knowledge among this class of people—founded upon the pure principles of Morality and Religion, are so very evident—he indulges himself in the pleasing hope, that every one, who loves his Country, and has it in his power, will most generously further and foster every institution of the kind, that may be established throughout this happy Union.

N. B. The re publishing this Notice gratis, where it may be thought expedient, by the different Printers in the Union, will confer a peculiar and memorable obligation on their most obedient and very humble servant G. McP.