Robert Munford III was born at Wakefield in Prince George County possibly in 1737. His birth date is unknown as are many details of his early life. (Richland, the family home in Mecklenburg County where Munford resided later in his life, was completely destroyed by fire early in the nineteenth century, and documents relating to his family history were most likely burned.) His father died when he was about eight years old, and he was raised mostly by his uncle, William Beverley. Like many sons of well-to-do plantation owners of the time, Munford was sent by Beverley to study in England for several years in his youth. Upon his uncle’s death in 1756, Munford returned to Virginia, where he began studying law at the office of a cousin, Peyton Randolph. About four years later, Munford began practicing law. Little is known about his domestic life, although he was married to Anna Beverley and the couple had two daughters and one son: Elizabeth (born in 1762), Ursula Anna (born about 1763), and William (born in 1775).

Munford’s first military experience came in 1756, when he served as a junior officer under Colonel George Washington in the French and Indian War (1755–1763). In 1765, Munford was named county lieutenant of Mecklenburg County, where his primary task was to defend the area from slave uprisings. Munford himself owned slaves left to him by his father.

Politically, Munford appears to have been a moderate during the pre-Revolutionary period, expressing loyalty to the king, but protesting taxation, and refusing to recognize the absolute authority of Parliament. Because he opposed the war, he was less active in public life for a short period before and after the war, but was elected to the House of Delegates in 1779. Munford maintained a role with the military throughout this time, however, and by 1781 he commanded the militias for Mecklenburg, Lunenburg, and Brunswick counties.

In addition to his many military and civic duties, Munford found time to write two plays, The Candidates (ca. 1770) and The Patriots (ca. 1777), several poems, and a partial translation of Ovid’s Metamorphoses. The plays do not appear to have been publicly performed or published in any form during Munford’s lifetime, though it is possible they were performed privately. The plays, several poems, and the first book of the Metamorphoses are included in a volume that was published by Munford’s son William in 1798.

Considered by many scholars to be the first comedies written in America, the plays are reminiscent of English Restoration comedy. The Candidates is also noteworthy as one of the best depictions of elections in Virginia in that era. Almost none of Munford’s literary works can be dated precisely, but based on events described in the plays, they appear to have been written during the 1770s. At least one poem was published in 1779.

Munford’s first play, the full title of which is The Candidates; or, the Humours of a Virginia Election, is a three-act farce about an election for the House of Burgesses, probably in October 1770. The central character, Wou’dbe, has served ably in the house for several years when he finds himself facing serious competition for the seat. Wou’dbe risks losing when he refuses to make promises he cannot keep—such as lowering essential taxes—and is attacked by his opponents with lies.

Through Wou’dbe and his colleague Worthy, Munford expresses his belief that suitable men are honor-bound to serve their country and also explores the difficulty of identifying acceptable candidates. But the play, laced with ribald jokes, slapstick physical humor, and the absurdities of the drunk and foolish, is no tedious exploration of electoral issues. As he prepares to attend a pre-election barbecue, Wou’dbe notes, “I find, in order to secure a seat in our august senate, ’tis necessary a man should either be a slave or a fool; a slave to the people, for the privilege of serving them, and a fool himself, for thus begging a troublesome and expensive employment.” In the end, Wou’dbe and Worthy stand for election together and are victorious.

The Patriots, Munford’s second play, is a five-act comedy that takes place, and was actually written, as the Revolution was unfolding. Based on the inclusion of certain events in the play, the work was probably written in 1777. The play addresses the conflicts among those who were loyal to England (Tories), those who sought independence for the colonies (Whigs), and those who were neutral. Within Virginia at that time, there was significant dissent, and sometimes even violent attacks upon those who did not show what some considered to be sufficient patriotism to an independent America. 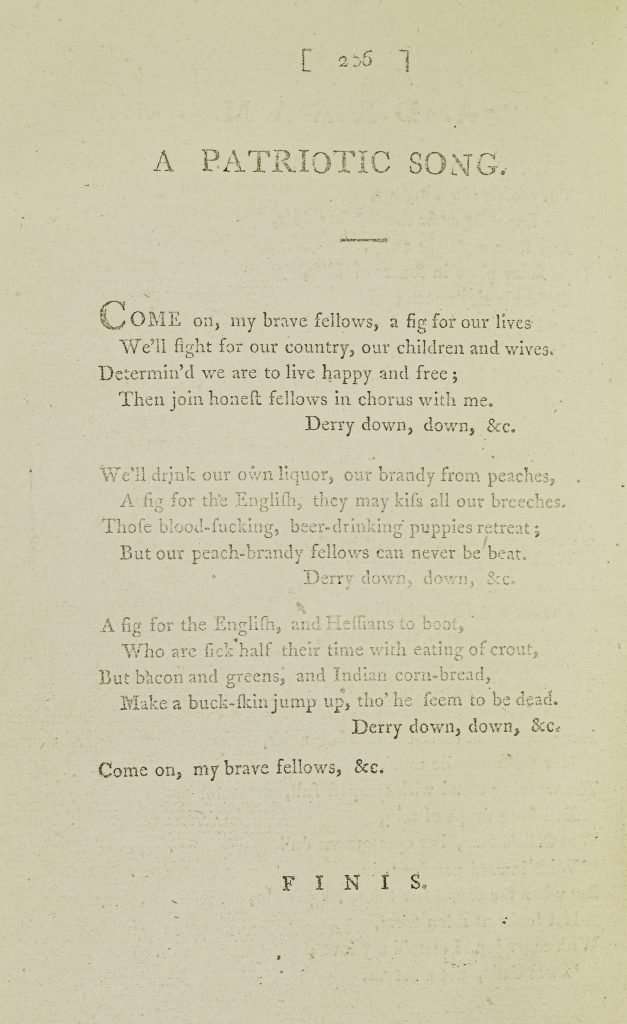 Munford himself was accused of being a Tory, in spite of his strong record in the assembly in favor of independence, and was therefore especially vehement in his condemnation of those who equated loudly proclaimed patriotic rhetoric with true patriotism. The character Meanwell, a gentleman accused of disloyalty, says, “I hope my zeal against tyranny will not be shewn by bawling against it, but by serving my country against her enemies; and never may I signalize my attachment to liberty by persecuting innocent men, only because they differ in opinion with me.”

Though Munford was not an advocate for revolution by war, when it came, he fought in defense of Virginia, and was unquestionably a patriot. In his poem “A Patriotic Song,” meant to be sung to the tune of “Derry Down,” Munford wrote:We’ll drink our own liquor, our brandy from peaches,
A fig for the English, they may kiss all our breeches.
Those blood-sucking, beer-drinking puppies retreat;
But our peach-brandy fellows can never be beat.

Documenting the American South: A Collection of Plays and Poems, by the Late Col. Robert Munford, of Mecklenburg County, in the State of Virginia

RELATED CONTENT
Categories:
Type:
MAP
TIMELINE
ca. 1737
Robert Munford III is born at Wakefield in Prince George County possibly in this year. His birth date is unknown as are many details of his early life. (Richland, the family home in Mecklenburg County, was completely destroyed by fire early in the nineteenth century, and documents relating to his family history were most likely burned.)
1756
After studying in England for several years in his youth, Robert Munford returns to Virginia, where he begins studying law at the office of a cousin, Peyton Randolph.
1765
Robert Munford enters the House of Burgesses, the same year as Patrick Henry, and works with him on several issues relating to the autonomy of the colony, including the Stamp Act of 1765.
1765
Robert Munford is named county lieutenant of Mecklenburg County, where his primary task is to defend the area from slave uprisings.
ca. 1770
Robert Munford writes his first play, The Candidates; or, the Humours of a Virginia Election, a three-act farce about an election for the House of Burgesses.
1779
Robert Munford is elected to the House of Delegates.
1781
Robert Munford commands the militias for Mecklenburg, Lunenburg, and Brunswick counties.
1783
Robert Munford dies.
FURTHER READING
CITE THIS ENTRY