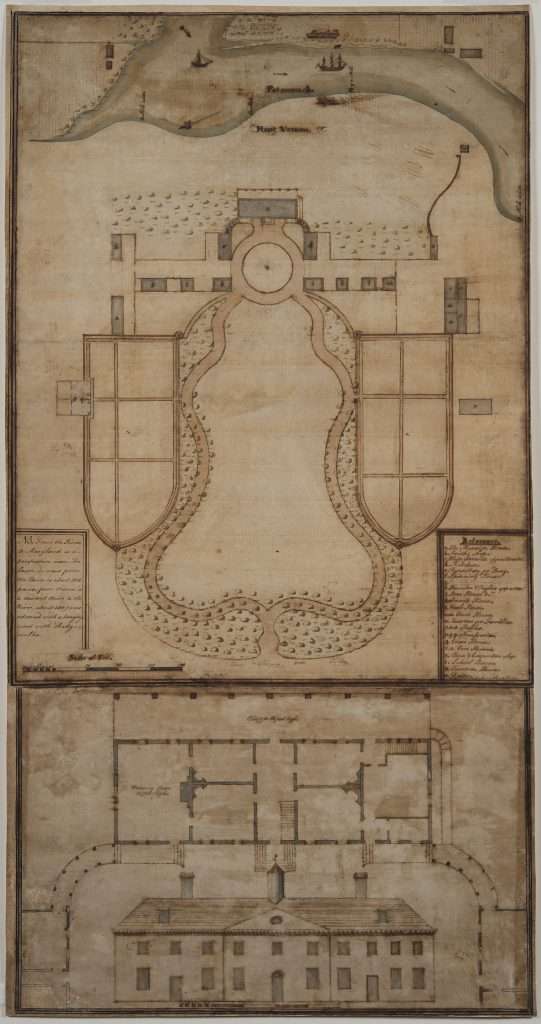 During the 1930s archaeology was adopted as a valuable tool for conducting research at a number of historic sites throughout Virginia. The first modern archaeological investigations undertaken at Mount Vernon were led by Morley J. Williams, from 1931 until 1939. Williams was an engineer and a landscape architect who first came to Mount Vernon to document the gardens and grounds as part of a larger survey of southern plantation landscapes. In 1936 Williams was named Mount Vernon’s director of research and restoration, and for the next three years he used archaeology to locate the sites of non-extant eighteenth-century buildings and other features, such as the blacksmith shop, the dung repository, and garden walls and other elements of the designed landscape. He also revealed a number of structures dating to the nineteenth-century ownership of the property by George Washington’s nephew, Bushrod Washington.

From 1941 until 1976, Walter M. Macomber, an architect who had worked for a number of years as a member of the restoration team at Colonial Williamsburg, served as Mount Vernon’s architect for restoration. Macomber undertook a wide range of projects, including changing many features in the mansion, restoring several of the outbuildings, rebuilding garden walls, reconstructing the Greenhouse–Slave Quarter complex, and excavating at several sites. Macomber returned to the site of the blacksmith shop in an attempt to uncover more information relating to the size and layout of the building. Although Macomber succeeded in revealing portions of the foundations for the smith’s forge and for the shop, it was determined that the evidence available at that time was insufficient to justify its reconstruction.

By the 1980s the Mount Vernon board of directors had determined to reinvigorate research pertaining to the inhabitants of the eighteenth-century plantation and the many activities that were carried on there. In 1984 they contracted with the Virginia Historic Landmarks Commission to conduct a survey of the 424-acre property, and to undertake test excavations at selected sites. More extensive excavations were carried out at the site of the blacksmith shop and in the surrounding work areas, and at the site of the House for Families slave quarter. In 1987 Mount Vernon established a permanent archaeology program, under the full-time direction of an archaeologist who had previous experience excavating colonial plantation sites.

In 1989–1990 Mount Vernon archaeologists returned to the site of the House for Families—the main slave quarter at the Mansion House Farm—from which an extensive collection of domestic, structural, and food-related artifacts had been excavated a few years earlier. The contents of the cellar were deposited between the late 1750s and 1792, after which the building was demolished and replaced by new quarters attached to the nearby greenhouse. The rich array of artifacts recovered from the cellar included ceramics, glass, tobacco pipes, buttons, buckles, table utensils, tools, and personal items, suggesting that these slaves benefited materially from their proximity to the Washington family. More than 24,000 bones from fifty-three different types of animals were recovered, which taken together represent one of the largest assemblages of food remains ever excavated in association with an eighteenth-century Virginia slave quarter. 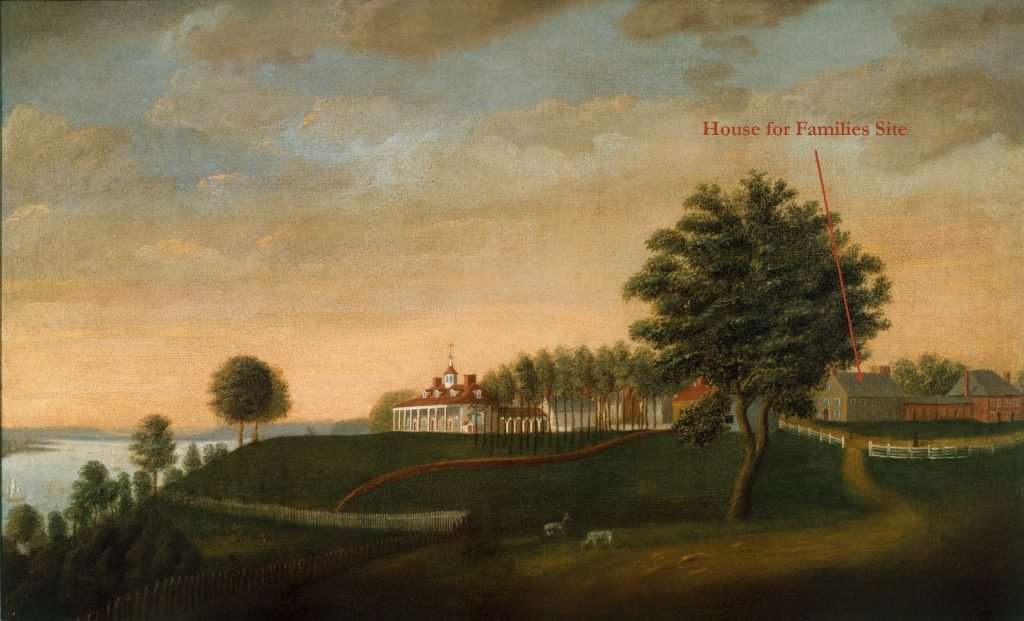 The evidence of the food remains indicates that the slaves living in the House for Families were adding to the rations of herring, cornmeal, beef, and pork by hunting wild game, fishing, gardening, gathering nuts and berries, and raising chickens. A number of the objects were probably handed down to the slaves from the Washingtons, while others might have been purchased with money earned through various tasks such as selling chicken eggs to the Washington family. Still other artifacts represent items that might have been made by the slaves themselves, either living on the plantation or nearby.

The Blacksmith Shop at Mount Vernon
The first blacksmith shop at Mount Vernon probably was constructed during Lawrence Washington‘s ownership of the property prior to 1754, and then was replaced or rebuilt by George Washington in 1768. It is the brick foundation of this building that was first uncovered by Morley Williams in the 1930s, and again by Macomber at different times. The additional work carried out at the site in the 1980s revealed further evidence for the layout of the building and remains of the associated fence lines, along with an extensive assemblage of artifacts related to operating the shop: fragments of gun parts, plows and other agricultural implements, horse shoes, and a range of domestic hardware, as well as pieces of hammers, chisels, and other smiths’ tools. In April 2009 the building was reconstructed and opened to the public as an operating shop. 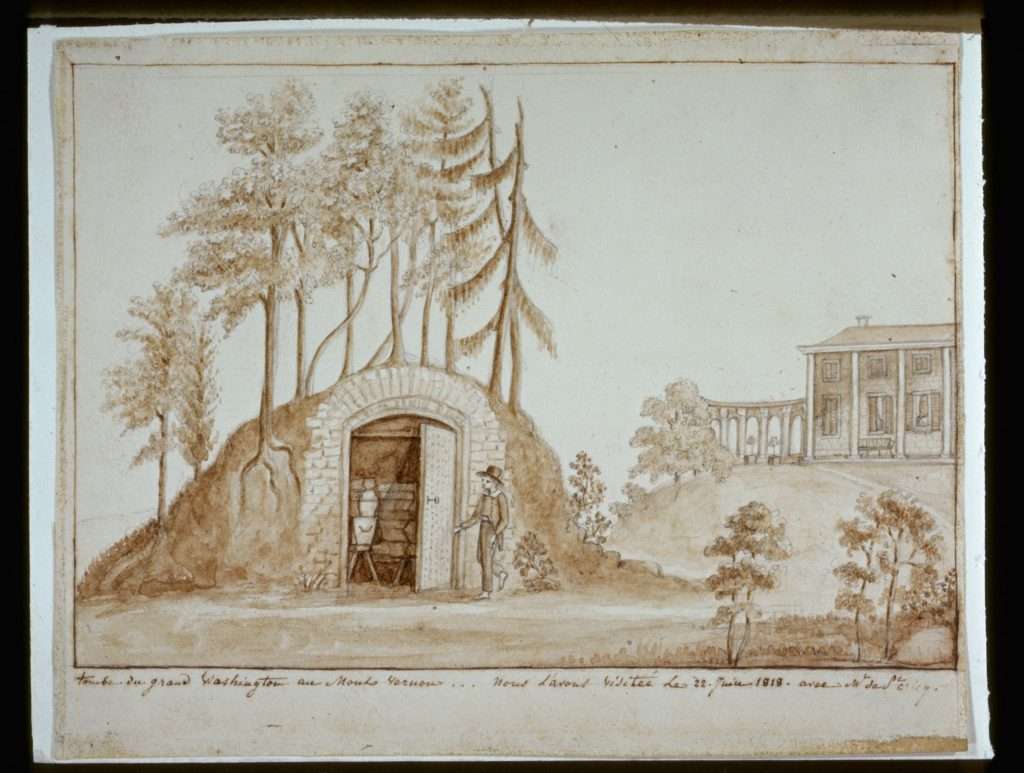 The fruit garden and nursery, referred to in the eighteenth century as the Vineyard Inclosure, is an approximately four-acre field positioned between the stable and the Washingtons’ tomb. The Inclosure is where George Washington first experimented with growing grapes during the 1770s; it was laid out in the 1780s as a formal fruit garden with an adjoining plant nursery. Excavations carried out from 1988 to 1991 revealed numerous features that provided clues as to the organization of the space: lines of post molds and holes for wooden fences and a complex of hedges (or “live fences”) and ditches, which Washington hoped would eventually replace the wooden fences as an effective and more efficient barrier. The fruit garden and nursery were restored in 1996 based upon the combination of historical documentation and archaeological research. 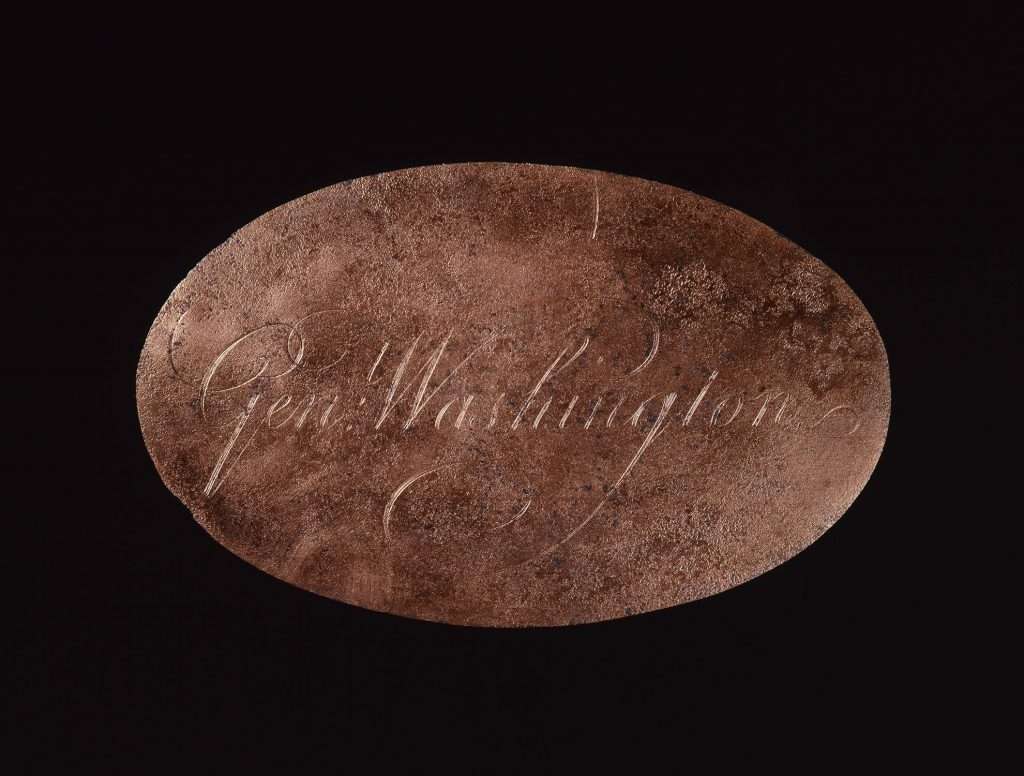 A diverse collection of domestic artifacts was excavated from 1990 to 1993 from a shallow depression located in a grove of trees less than ninety feet to the south of the mansion. This area was used as a trash dump—or what archaeologists call a midden—from the time of the Washington family’s arrival at Mount Vernon in 1735 until the 1820s. But the bulk of the deposit dates from the early years of George Washington’s tenure at Mount Vernon. More than 75,000 artifacts were recovered, including a wide variety of household objects, food remains, and even structural debris related to altering the mansion at the time of George and Martha Washington‘s marriage in 1759. More than 180 ceramic vessels, wine bottles and table glass, tobacco pipes, needles and pins, children’s playthings, and much more, relate to daily life in the Washington household. Locally made ceramics and other items undoubtedly relate to the slaves who lived and worked nearby. A brass nameplate, engraved “Genl Washington,” came from one of the campaign trunks Washington used during the American Revolution (1775–1783). A brass denier gauge, a device used to inspect cloth and to count the number of threads woven per inch, most likely was used by Martha Washington in her role as supervisor of the enslaved weavers and spinners. 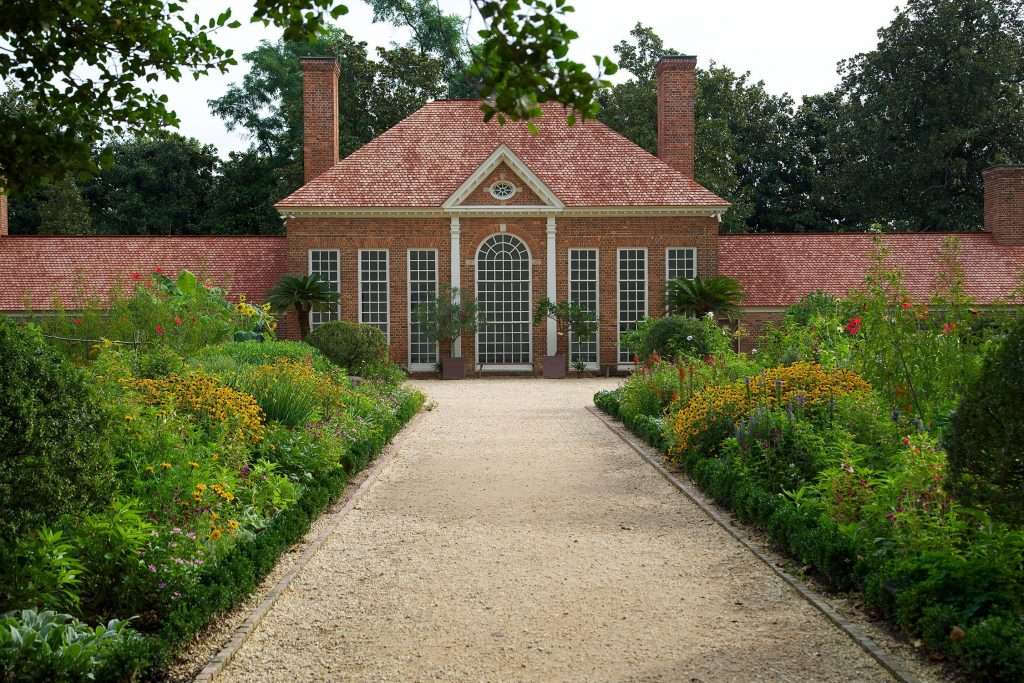 The Upper Garden at Mount Vernon

From 2005 to 2010 Mount Vernon archaeologists carried out a major research project aimed at documenting changes made over the years to the layout of the Upper Garden, one of two formal enclosed gardens associated with the mansion. The ultimate outcome of the work has been to provide data that was instrumental in redesigning the space as a more authentic representation of the garden George Washington knew in 1799, the year of his death. Given the many changes that had been made to the area over the succeeding two centuries, a surprising number of features relating to the earlier gardens were revealed. These included clear evidence for the system of gravel-surfaced pathways that divided the space; what are likely to be tree-planting holes from the first garden that was laid out in the 1760s; linear vegetable beds dating somewhat later; and evidence for the large rectangular planting beds that characterized the garden as it was redesigned by Washington beginning in the 1780s. At that time the garden was transformed from a rectangular space to a one-acre, bullet-shaped enclosure linked to the new landscape design based on English Picturesque principles that Washington had adopted. (English Picturesque adopted an idealized view of nature, often inspired by paintings.) This garden incorporated wide gravel paths surrounding the large square beds, oriented toward an imposing brick greenhouse that was erected between 1784 and 1787. 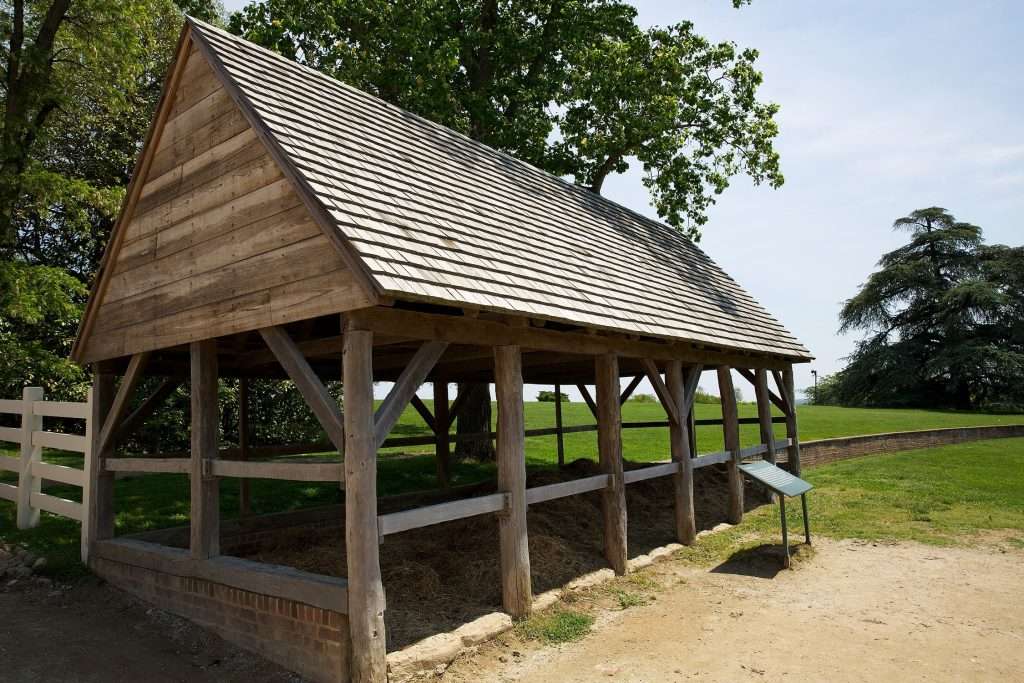 In 1787 Washington constructed a building across from the stable that was dedicated to converting horse manure and other organic refuse into fertilizer. The Repository for Dung was an open-sided frame structure covering a recessed cobblestone floor, where the waste was composted in preparation for fertilizing the nearby gardens. Archaeological evidence for the structure consisted of remnants of the posts that supported one wall of the structure, masonry foundations for the other three walls, and the recessed pit with a cobblestone floor. This structure was reconstructed in 2000, with the original cobblestones in the floor preserved and exposed to view. 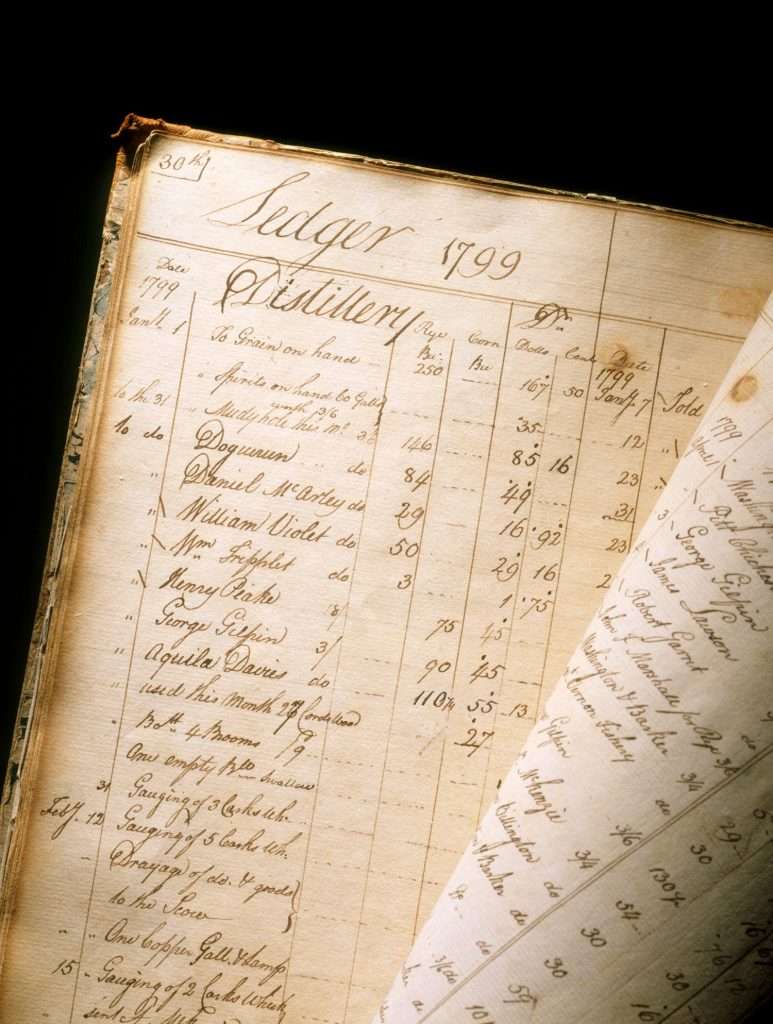 In 1797 George Washington embarked on a major new commercial venture when he agreed to a proposal offered by his Scottish farm manager, James Anderson, to erect a whiskey distillery at his gristmill. Initially adapting an existing coopers shop to house the distillery, the immediate success of the enterprise led Washington to build a new large stone building outfitted with five copper pot stills and a boiler for cooking the mash. With the new still house on line in the spring of 1798, production increased dramatically, reaching almost 11,000 gallons of spirits. They primarily produced rye whiskey and small amounts of apple and peach brandy, which sold for more than $7,500 in 1799. Archaeologists excavated the site from 1999 to 2005, revealing the foundations of the roughly seventy-five-by-thirty-three-foot still house. They found deteriorated masonry and burned soils related to the five stills and the boiler, a series of drains used to carry water away from the production area, and portions of a stone floor where the grain was mashed. The distillery was reconstructed and opened to the public in 2007, and along with the nearby restored and operating gristmill demonstrates the process by which grain grown on the plantation was ground and converted into whiskey.