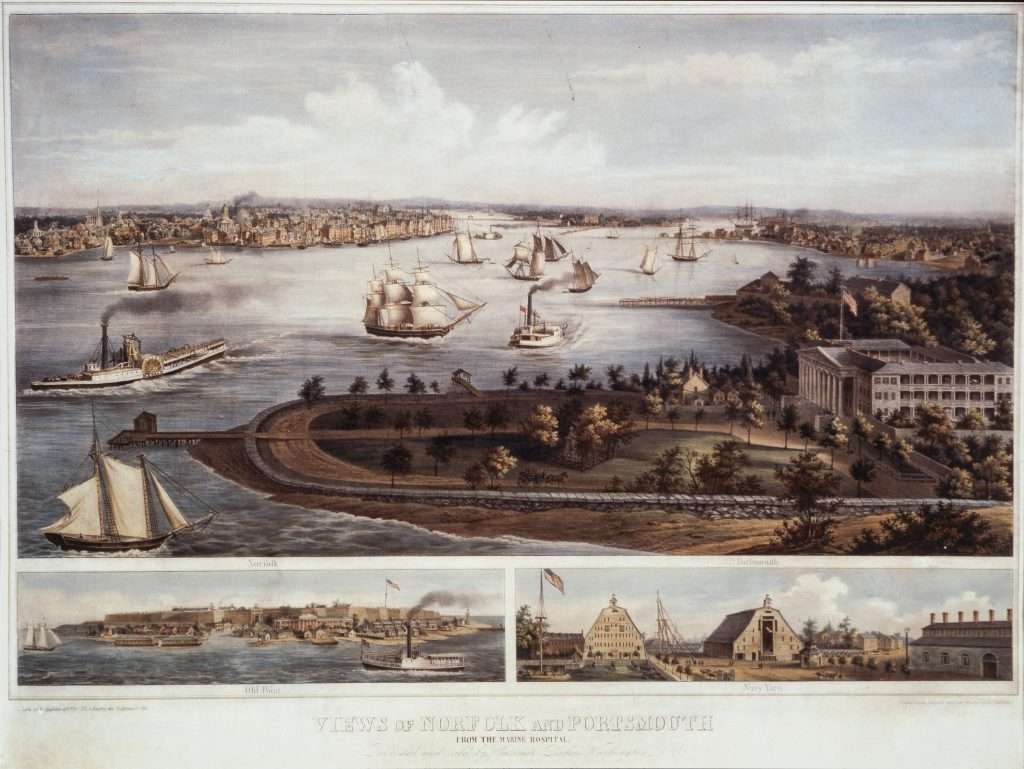 The son of an enslaved man named David and an unnamed mother, Minkins was born into slavery in Norfolk and answered to the name Sherwood until he was a young man. Although his birth year is unknown, in 1861 he reported his age as forty-seven, meaning he may have been born about 1814. Minkins and his parents were owned by Thomas Glenn, a native of New Kent County who operated the Eagle Tavern in Market Square, a busy commercial area of Norfolk.

Glenn died on July 14, 1832, followed by his wife, Ann Glenn, on December 28, 1836. The estate, including eight slaves, was divided equally among the couple’s five underage children. Until the children reached maturity, the property was managed by Elijah P. Goodridge, a Norfolk businessman who hired out the slaves. Records for 1838 indicate that Minkins, then still called Sherwood, was hired to R. S. Hutchings and Company, a grocery that mainly sold liquor and was located near the Eagle Tavern. By 1849, Martha Hutchings, the founder’s widow, owned Minkins outright. At that time, her business was preparing to default on its loans, and on July 23, 1849, a notice appeared in the Norfolk and Portsmouth Herald announcing the public sale of a “Negro Man Shadrach.”

John A. Higgins, of Norfolk, purchased Minkins that day and may have hired him out until October. In November 1849, Higgins sold Minkins to his father-in-law, John DeBree, a career naval officer from New Jersey. The low purchase price of $300 suggests that the balance of Minkins’s worth may have gone toward a debt owed by Higgins to DeBree. Minkins worked as a house servant in the DeBree home at 117 East Main Street, Norfolk, near Market Square.

On May 3, 1850, Minkins escaped Norfolk. He probably left by sea, as ships regularly steamed to Boston, either directly or via Baltimore. It is not known whether he had the assistance of the captain or crew, but evidence suggests he may have left with at least one other slave. In March 1856, Rebecca Jones, a Norfolk slave who escaped to Boston by ship, told abolitionists that her husband had escaped in 1850 “in company with the noted fugitive, ‘Shadrach.'” 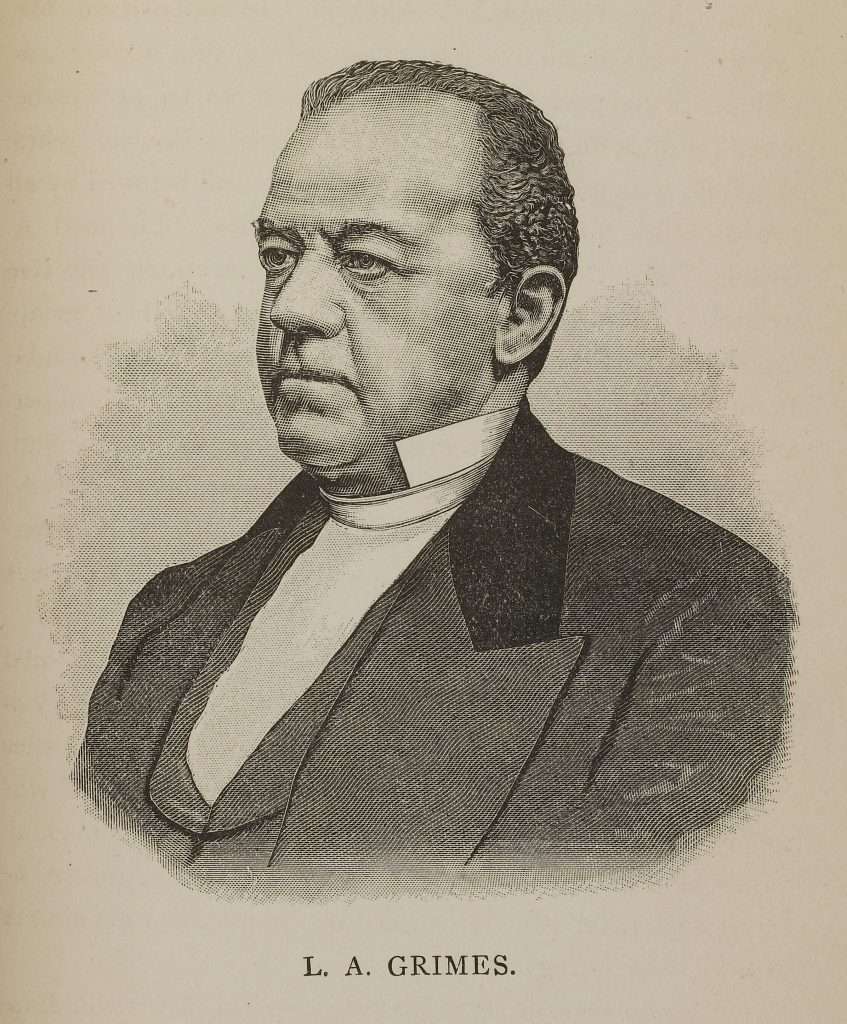 After arriving in Boston, Minkins happened to see William H. Parks, a white man who had worked with him at R. S. Hutchings and Company in Norfolk. Parks paid Minkins to do odd jobs until he was hired to wait tables at the Cornhill Coffee House, an upscale restaurant and hotel in Cornhill Court, less than a block from the city courthouse. Leonard A. Grimes, an African American born free in Virginia, later testified that at this time Minkins began attending the Twelfth Baptist Church on Southac (later Phillips) Street, where Grimes ministered. While in Boston, Minkins used the name Frederick, likely in order to conceal his identity.

On September 18, 1850, U.S. president Millard Fillmore signed the Fugitive Slave Act, legislation that increased federal resources allocated to the effort of returning runaway slaves to their owners. While politicians like Senator Daniel Webster, of Massachusetts, saw the law as one of several compromises essential to maintaining a union of free and slave states, antislavery activists in Boston were outraged. On October 5, African Americans met and established the League of Freedom, a committee charged with rescuing and protecting arrested fugitives. On October 14, white activists formed a Committee of Vigilance and Safety with the same goals. Later in the same month, these groups were involved in intimidating a slave catcher from Georgia who had been hired to capture the fugitive slaves William and Ellen Craft. He left town without the Crafts. 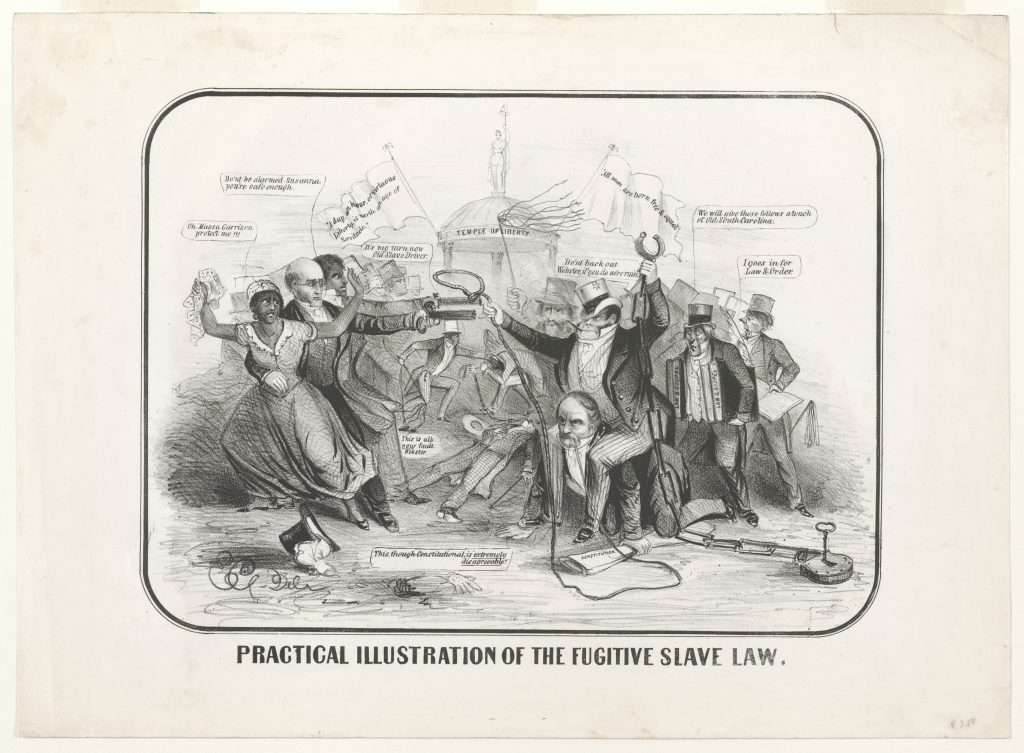 On February 12, 1851, John Caphart (sometimes Capehart), a slave catcher hired by DeBree, arrived in Boston from Norfolk. Caphart had a violent history, and his appearance was caricatured by Boston abolitionists. A poster later described him as being “lean and lanky” with reddish-brown hair and “an uncommonly hard, bad face, and ugly, not only in form and feature, but expression.” Caphart arrived armed with papers issued by a Virginia court testifying to Minkins’s various owners. The papers estimated Minkins’s age to be twenty-five or twenty-six, his height five-feet-seven, his complexion “bacon color,” and his build “stout” and “square.”

Caphart sought and received an arrest warrant from George T. Curtis, a designated federal commissioner who would later serve as co-counsel to Dred Scott in his appeal before the U.S. Supreme Court. On February 14, the assistant deputy marshal, Patrick Riley, was charged with executing the warrant. The next morning, he sent deputies to Cornhill Coffee House where, with the assistance of a traveling circus worker named Charles G. Forbes, they positively identified Minkins. Although Minkins didn’t resist his arrest, after being escorted across Court Square to the courthouse, a deputy observed him uttering “wild remonstrances, questions, and explanations to the men who had captured him and to the bystanders.”

Charles List, secretary of the Vigilance Committee, soon arrived and counseled Minkins not to speak. Within about thirty minutes, 100 to 150 people crowded the second-floor courtroom, many of them black and, in the words of a witness, “exceedingly excited.” Six lawyers volunteered for Minkins’s defense, one of whom helped Minkins, who apparently could not write his name, make his mark to sign over his power of attorney. Minkins was “a good deal excited,” the lawyer later recalled, “and I had to guide his hand.”

Curtis convened the hearing long enough to postpone it until February 18, in order to provide the defense time to prepare. Minkins and his lawyers were allowed to remain in the courtroom to confer, and they were joined by some members of the press and several deputy marshals. Meanwhile, hundreds of people gathered outside the courtroom and at about two o’clock some of them charged the door. Approximately twenty black men led the assault, and it is unclear whether their action was prearranged or spontaneous. Regardless, they burst through the outer door and then through a second, inner door before entering the courtroom. Witnesses described Minkins, who was standing with the Reverend Grimes at the time, as looking frightened and confused. Four or five black men grabbed him and roughly carried him out of the courthouse, his clothes partially ripped off. According to the scholar Gary Collison, “The rescuers headed north along Court Street, 200 or more following like the tail of a comet.” If the deputy marshals pursued, it was only for a few blocks. 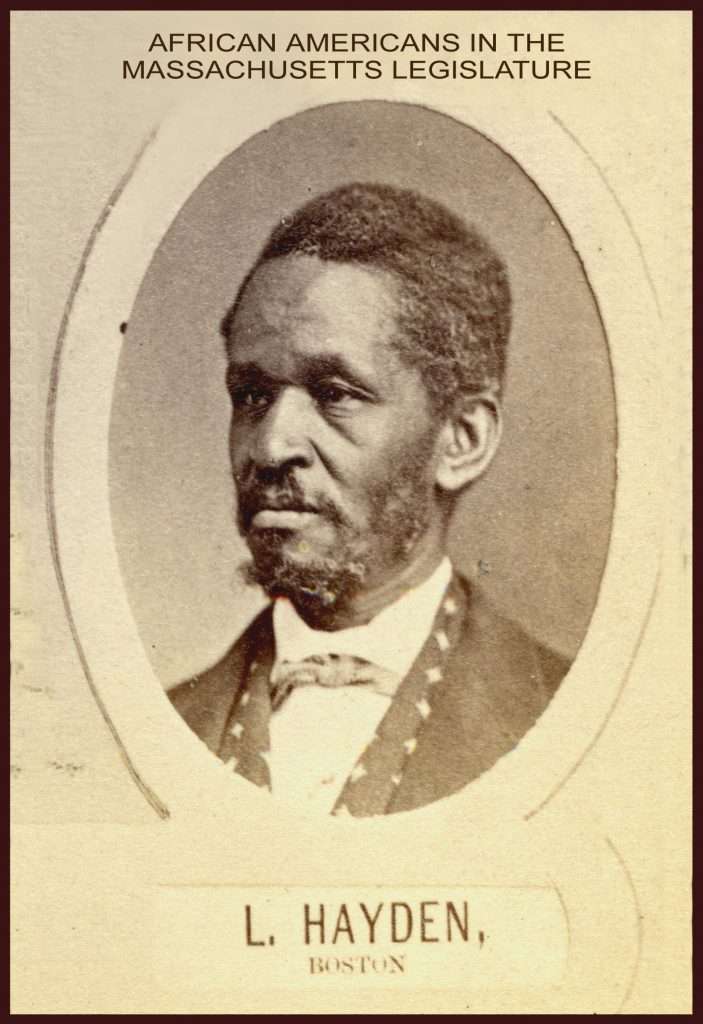 Black activists Lewis Hayden and Robert Morris took charge of Minkins, hiding him for a short time in the attic of a widow who lived near Hayden. At three thirty, they took him across the Charles River to Cambridge, where he stayed with the Reverend Joseph C. Lovejoy, whose brother Elijah Lovejoy had been murdered by a proslavery mob in Illinois in 1837. From there, John J. Smith, a black leader in Boston and reportedly a native of Richmond, helped them obtain a wagon and horses. From Cambridge, Hayden, Smith, and Minkins traveled to Concord, where Minkins stayed several hours with Francis Edwin Bigelow and his wife, Ann Bigelow. Francis Bigelow then drove Minkins west to Leominster, and from there the Underground Railroad guided him to Fitchburg, to New Hampshire and Vermont, and finally into Canada.

Minkins’s escape caused an uproar in Boston and across the country. Abolitionist papers predictably celebrated the action while southern papers denounced it. For the Richmond Examiner, it was just one among many “outrages and aggressions” perpetrated on the slaveholding South. Conservative papers in the North, especially those that supported the Compromise of 1850, of which the Fugitive Slave Act was a crucial part, also reacted unfavorably. The New York Express saw the rescue as “a deep stain upon the city of Boston.” 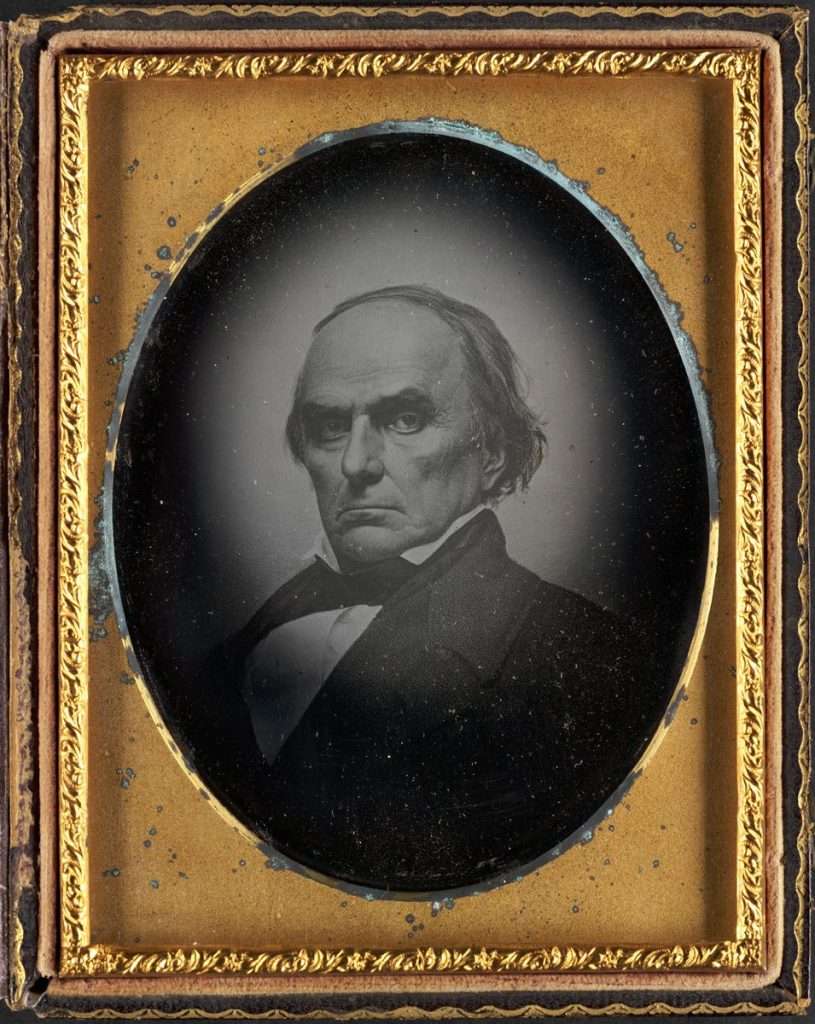 As a vocal advocate in the Senate of the Compromise of 1850, Daniel Webster was embarrassed by the event. The new secretary of state telegrammed a friend, demanding to know how Minkins could have escaped: “[D]id the Marshal do his duty. Answer.” On February 18, President Fillmore issued a proclamation, written and also signed by Webster, demanding that citizens obey the law and that the appropriate parties involved in the Minkins incident be prosecuted. Two days later, Webster wrote a letter to a group of New Yorkers, on the occasion of George Washington‘s birthday, describing Minkins’s rescues as, “strictly speaking, a case of treason.” In an additional embarrassment to Webster and the Fillmore administration, none of the people charged in the Minkins case were convicted.

Once across the border, Minkins settled in Montreal, Lower Canada (later Quebec). With some help, he composed a letter, dated February 28, 1851, thanking his supporters in Boston for their help in his escape, and it was printed first in the Boston Commonwealth and then in Frederick Douglass’s newspaper North Star. He mentioned his poor health and the severe weather he had endured on his journey north before signing himself “Frederick Minkins.” He adopted the last name for his new life in Canada and soon paired it with his previous first name, Shadrach.

On March 13, the Montreal Pilot advertised the final concert of the Real Ethiopian Serenaders, a black singing group from Philadelphia. It would serve as a benefit for five newly arrived fugitive slaves, including “Shadrack,” who would “relate the circumstances of his wonderful Escape from Boston.” Minkins worked several jobs in Montreal and opened multiple restaurants, all of which failed. By 1853 he had married an Irish woman named Mary, last name unknown, and the couple had four children: Eda and William, both of whom died young, and Mary and Jacob. Beginning in 1859 he operated a barbershop. Minkins died in Montreal on December 13, 1875. The cause of death, according to a handwritten burial record, was “disease of the stomach.”