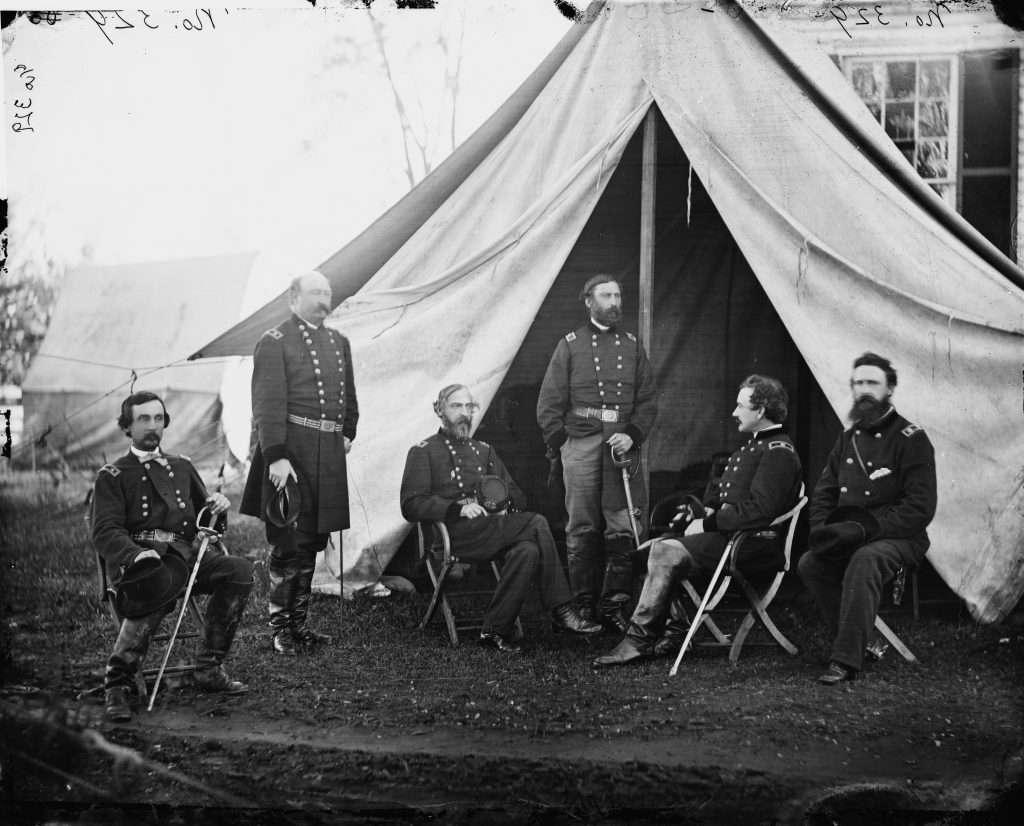 Generals of the Army of the Potomac

After the affair at Bristoe Station on October 14, 1863, the Union Second Corps under Gouverneur K. Warren retreated to Centreville, where it rendezvoused with the rest of the Army of the Potomac. Lincoln and Halleck continued to insist that Meade bring Lee’s army to battle, their frustration having grown in the months since Gettysburg. Meade, they believed, had failed to pursue the Confederates with enough vigor and, consequently, had wasted a golden opportunity to destroy them. For his part, Meade was wary of the capricious autumn weather in Virginia and especially cautious after dispatching the Eleventh and Twelfth corps to fight in the West. He remained content to consolidate his position and await further moves by Lee.

Lee, meanwhile, settled into a defensive line along the Rappahannock River. Unable to guard the crossing at Kelly’s Ford because of the lay of the land, Lee placed troops on the north side of the river at Rappahannock Station. There, he could hold off more Union men with fewer of his own, freeing up resources he could use to contest any advance across Kelly’s Ford. Despite the fact that Lee felt confident about the fortifications at Rappahannock Station, Confederate general Jubal A. Early—filling in for Richard S. Ewell as commander of the Confederate Second Corps—expressed reservations. Being stuck north of the river, he reasoned, meant that the only Confederate line of retreat lay across a pontoon bridge. 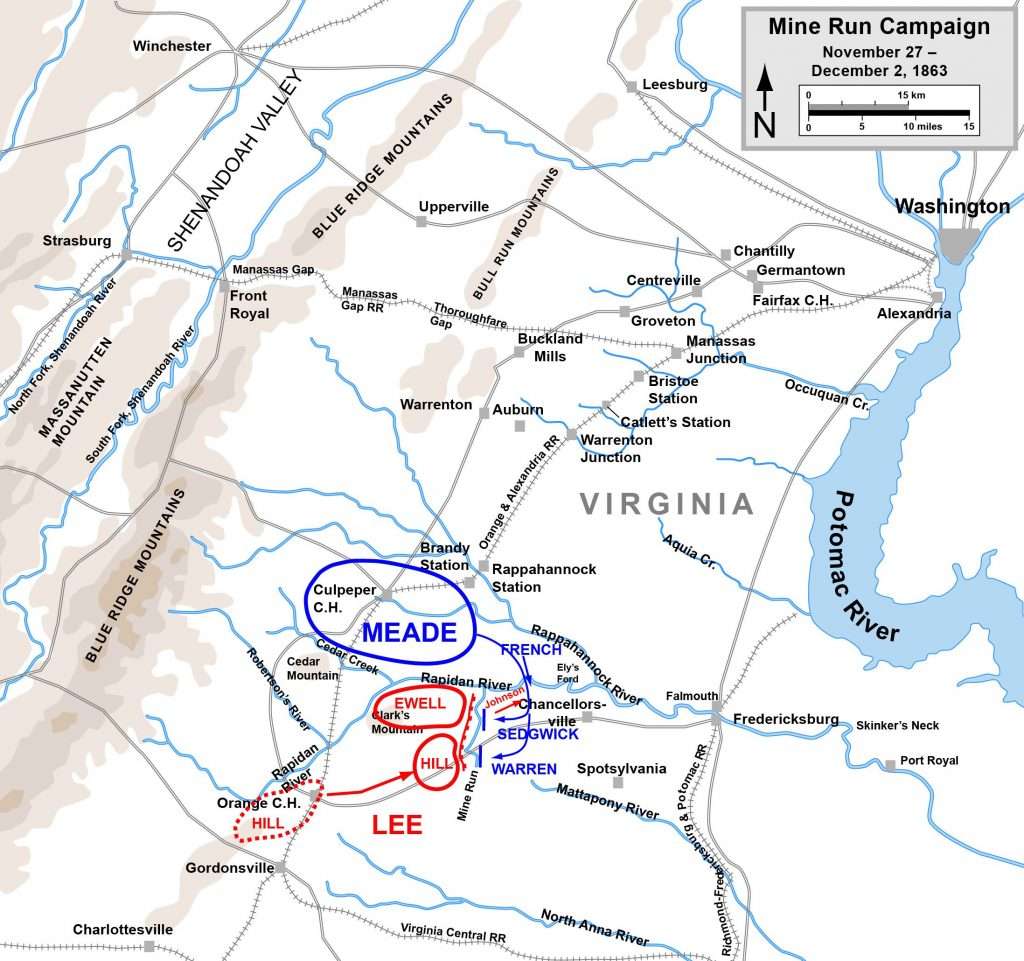 Map of the Mine Run Campaign

On November 7, Meade aggressively moved against Lee. He divided his forces in two, sending one wing, under John Sedgwick, to Rappahannock Station. The Confederate position on the north side of the river quickly fell, and Sedgwick inflicted nearly 1,700 casualties on Early’s division. The other Union wing, under William H. French, brushed aside Confederate defenders at Kelly’s Ford, making the Confederate line along the Rappahannock untenable and forcing Lee to withdraw to positions along the Rapidan River. Despite these successes, Meade chose to stay put for several weeks in an effort to shore up his supply lines. This allowed Lee the opportunity to fortify his positions.

Rather than attack Lee head on, as Ambrose E. Burnside had done to disastrous effect the year before at Fredericksburg, Meade devised a more modest plan to turn Lee’s right flank. He would send Warren’s Second Corps, French’s Third Corps, and George Sykes’s Fifth Corps across the Rapidan and then west to the high ground across a small, north-to-south-running creek called Mine Run. Unfortunately for Meade, French had trouble crossing the rain-swollen Rapidan, causing traffic jams down the line of Union forces; then he took a wrong turn on his way to Mine Run. 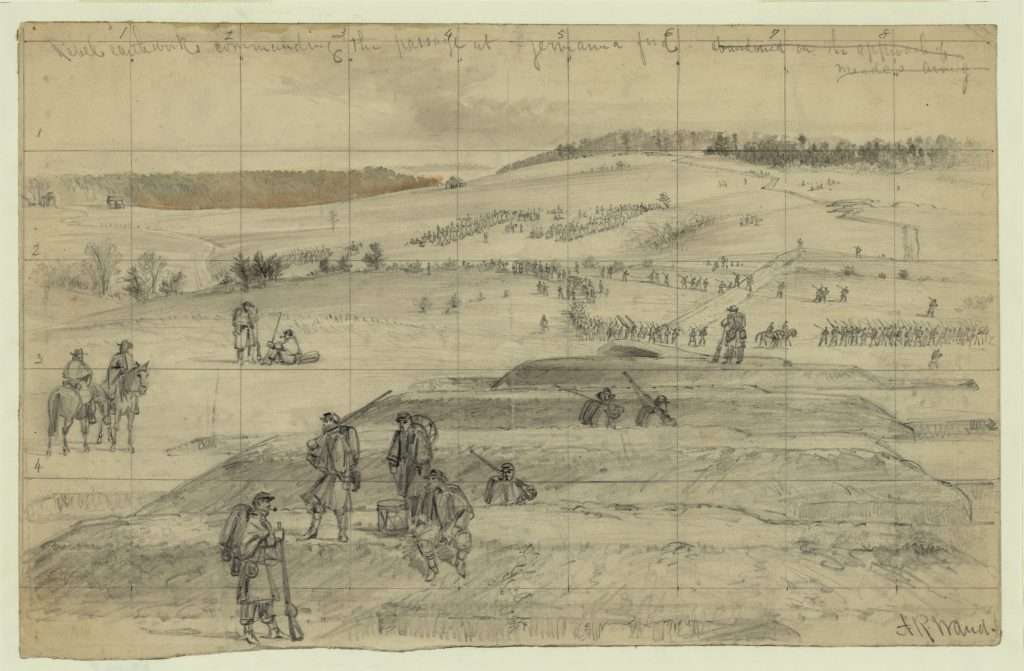 Rebel earthworks commanding the passage at Germanna ford, abandoned on the approach of Meade’s army

Lee was still positioned east of the creek, in an infamous stretch of trees and tangled underbrush known as the Wilderness, and on the afternoon of November 27, Early’s men encountered Warren’s Second Corps near Robertson’s Tavern (also known as Robinson’s Tavern or what Confederate forces referred to as Locust Grove). Several Confederate divisions formed a battle line stretching from the Orange Turnpike to Payne’s Farm farther north, and the fighting—which now included French, who had become lost yet again—seesawed, with neither side able to gain a decisive advantage. That night, during a cold rain, Lee pulled back to the west side of Mine Run and onto the high ground. He now was protected by the Rapidan to the north and by Mine Run to the east.

Meade followed Lee to the creek, but attempted no crossing. Warren moved with some success against Lee’s right on November 29 but ran out of daylight. He urged Meade to launch a full-scale assault from his end of the line the next day, his confidence bolstered by the arrival of two additional divisions. The next morning, however, with Lee’s entrenchments in plain view, he changed his mind. “I would sooner sacrifice my commission … [than] my men,” he declared. Meade agreed, and echoed Warren’s sentiments in a letter to his wife: “I would rather be ignominiously dismissed, and suffer anything, than knowingly and willfully have thousands of brave men slaughtered for nothing.”

As such, he stayed put until December 2, and then withdrew his Army of the Potomac north.

The Mine Run campaign left both Lee and Meade frustrated. Lee, true to form, seethed that he had failed to land a crushing blow on the Army of the Potomac. His soldiers seemed similarly annoyed, if the memory of a North Carolina infantryman is typical. He remembered the campaign as “one of hard marching day after day and preparations for battles that did not materialize.” In addition, Lee was concerned about his top lieutenants. Ewell and Hill had been promoted to corps command following the death of Thomas J. “Stonewall” Jackson at the Battle of Chancellorsville, fought just down the road the previous spring. But at Mine Run, Ewell was out sick, and neither his temporary replacement, Early, nor Hill had accomplished anything inspiring.

Meade, meanwhile, suffered politically for his refusal to attack. While there was a fear among Union men of repeating the debacle of Fredericksburg—Warren wrote his wife that his corps “all feel that for once there was a senseless slaughter saved by the action of their commander”—there was a steady disillusionment among those who preferred advancing to retreating. Lincoln and Halleck were certainly chief among them. Wishing that Meade might for once retreat south, they would finally get their wish the following spring, when Ulysses S. Grant launched his Overland Campaign. “If you see the president,” Grant told a journalist then, “tell him there will be no turning back.”