Mercer was born on January 17, 1725, at Pitsligo Kirk, the family farm in Aberdeenshire, Scotland. His parents were William Mercer, a Presbyterian minister, and Ann Monro Mercer. By 1744, he had obtained a medical degree from the University of Aberdeen. Mercer and his family were Jacobites, meaning that they supported the restoration of the Stuarts to the English throne. The Stuart king James II, a Catholic, had been deposed in 1688 by the Dutch Protestant William III and his wife, Mary, who was King James’s daughter. Queen Anne, another of James’s children, ruled from 1702 to 1707, after which the Hanoverian kings succeeded to the throne. When Charles Edward Stuart, Anne’s brother, arrived in western Scotland, in July 1744, Mercer promptly joined the cause, fighting with “Bonnie Prince Charlie” at Culloden on April 16, 1746.

Once the rebellion was suppressed, Mercer fled to America, arriving in Pennsylvania in May 1747 and residing briefly in Philadelphia. He eventually moved to the Cumberland Valley on the Pennsylvania frontier, where he established a farm near the village of Conocoocheague and began a successful medical practice. In 1754, at the start of the French and Indian War, Mercer became a captain in the 1st Pennsylvania Militia Regiment and served as a surgeon at Fort Cumberland, treating many of the wounded from British general Edward Braddock’s disastrous attack on Fort Duquesne on July 9, 1755. In September 1756 Mercer participated in a successful attack upon Kittanning, a major stronghold of the Delaware Indians on the Allegheny River. As French allies, the Delaware tribe had been using Kittanning as a staging ground for raids on British frontier settlements. Amid the melee, Mercer’s right arm was fractured by a musket ball, and during the withdrawal he was separated from his company. He eventually escaped to the frontier settlement of Shirleysburg and in May 1758 was promoted to colonel. 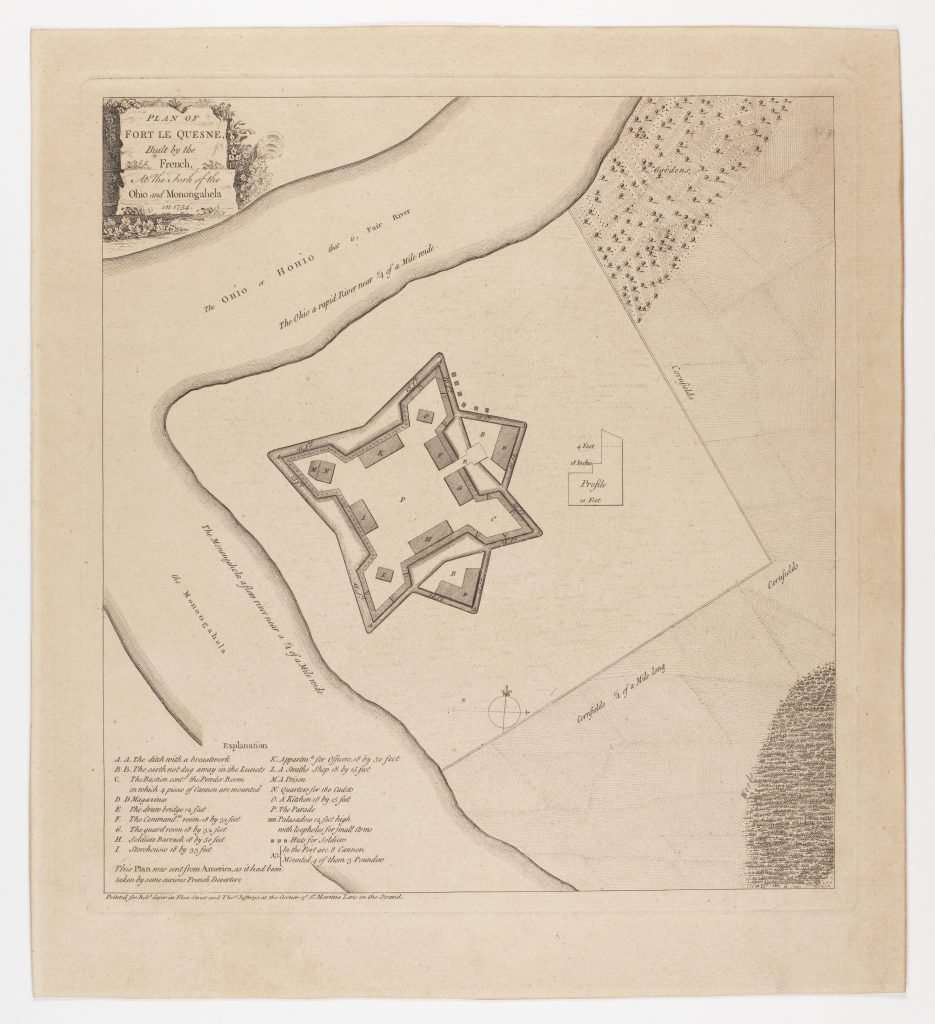 In the autumn of 1758 Mercer and the 1st Pennsylvania joined Brigadier General John Forbes’s methodical campaign across southern Pennsylvania toward the Ohio River’s headwaters. He cooperated in building a series of small forts and supply depots along the new military highway, Forbes Road, and was with the vanguard that encountered Fort Duquesne, at present-day Pittsburgh, on November 23. The French garrison had set fire to the fortification a day earlier, and then retreated. Forbes assigned Mercer the task of dismantling the ruins and, with Colonel Henry Bouquet, supervising the building of Fort Pitt. Because Forbes and Bouquet soon departed for Philadelphia, Mercer became Fort Pitt’s first commandant.

Virginia and the Revolution 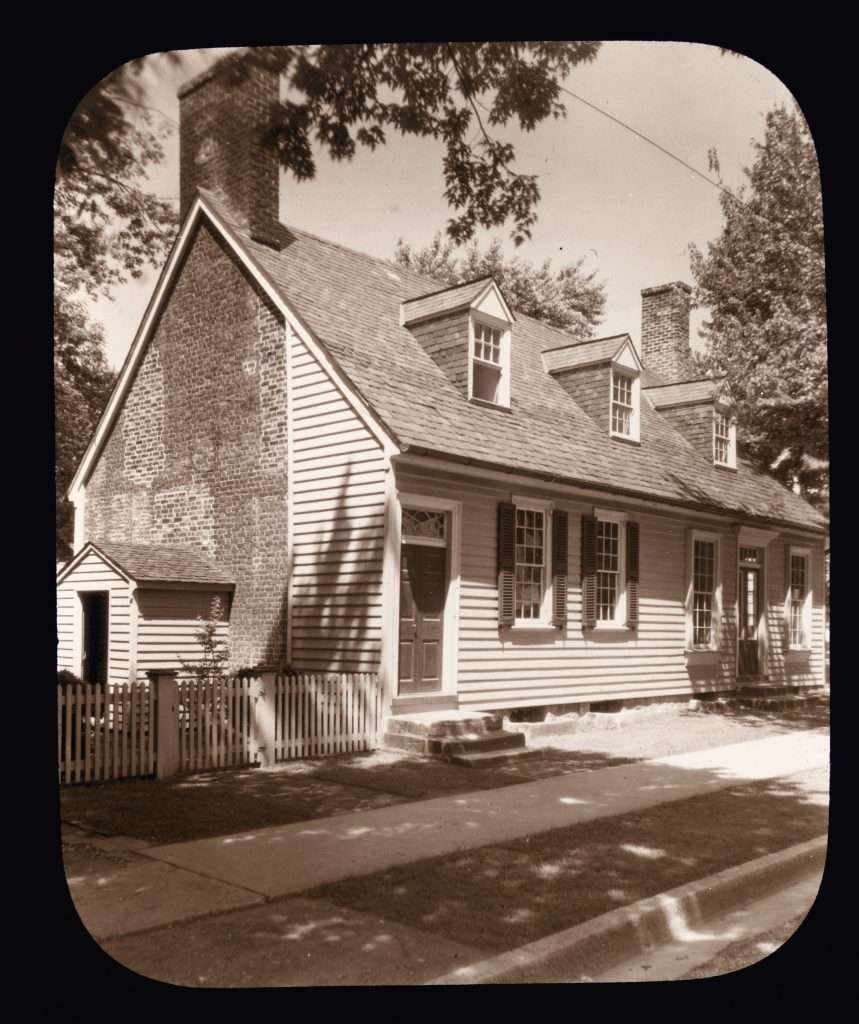 By 1761 Mercer had returned to civilian life, relocating to Fredericksburg and opening an apothecary shop and medical practice. He married Isabella Gordon of Fredericksburg and they had five children. Mercer also purchased extensive acreage in both Virginia and western Pennsylvania. About 1768 George Washington’s mother moved to a house in Fredericksburg, vacating Washington’s boyhood home at Ferry Farm. Mercer, who had befriended Washington while serving under Forbes, purchased the plantation and became a regular visitor to Mount Vernon.

With the outbreak of the American Revolution, in April 1775, Mercer publicly endorsed “independency.” Given his Jacobite past, he likely possessed scant regard for the Hanoverian king, George III. With support from Washington and Patrick Henry, the General Assembly appointed Mercer colonel in the 3rd Virginia Regiment on February 3, 1775. A little more than a year later, on June 5, 1776, the Continental Congress appointed him brigadier general and placed him in command of a force guarding the northern New Jersey coast from British raiding parties based in Long Island, New York. 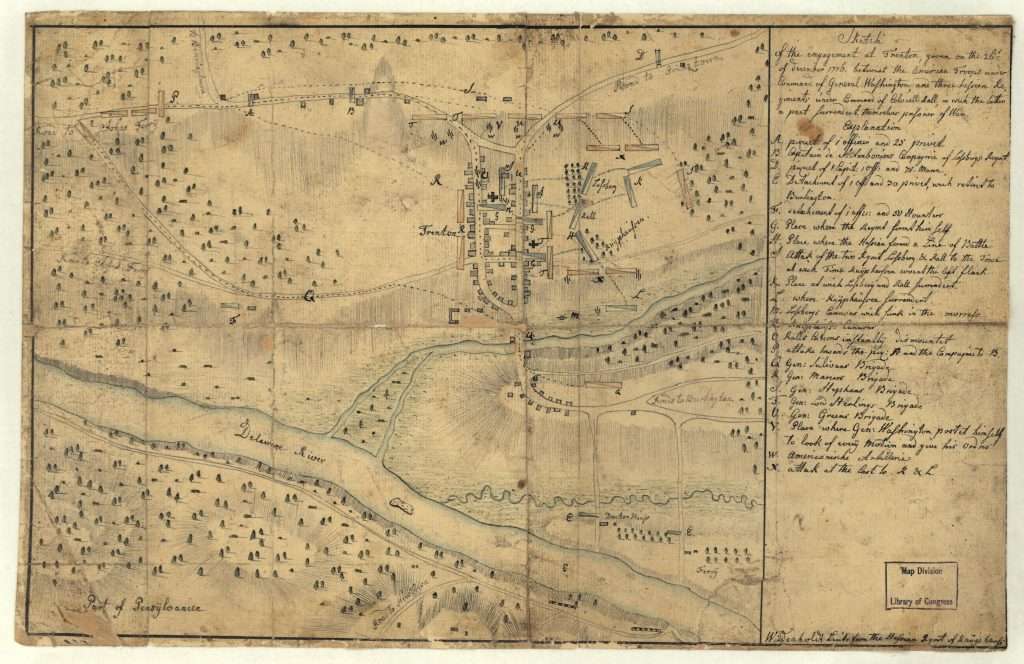 In October 1776, Mercer commanded rear guard troops covering the Continental army’s retreat from New York City into New Jersey. He also ensured that British troops did not capture the various Delaware River bridges into Pennsylvania. Meanwhile, in December, Mercer worked closely with Washington on devising a surprise attack upon Trenton, New Jersey, which contained a garrison of Hessian mercenary troops. At dawn, on December 26, Mercer was among the first American attackers to enter Trenton 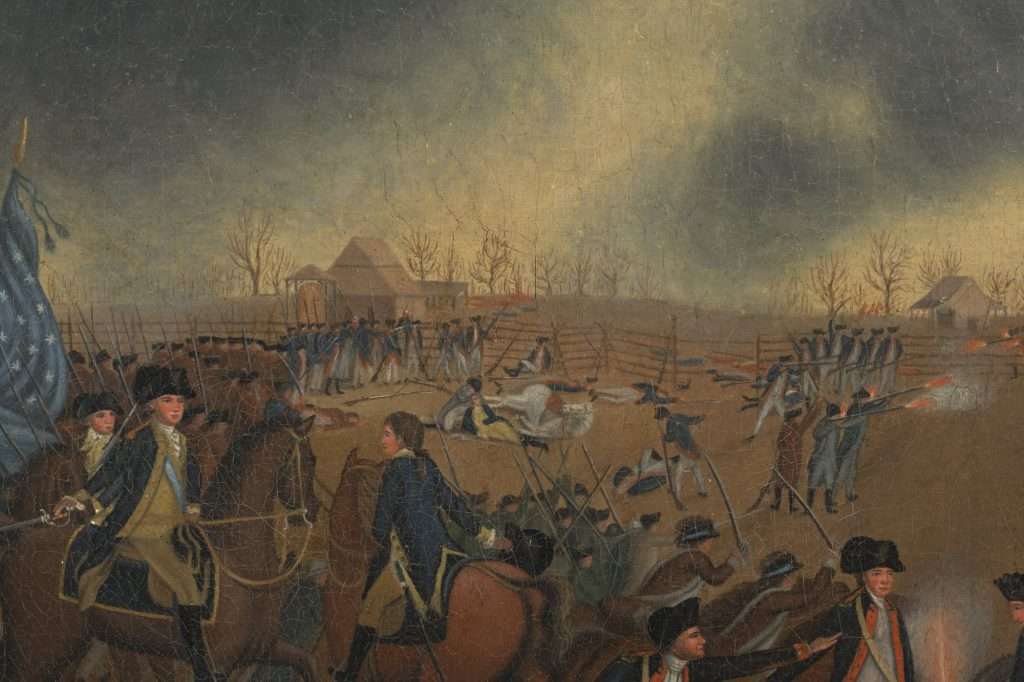 The Battle of Princeton

Mercer devised a comparable plan for nearby Princeton. On January 3, 1777, he led his troops to secure Stony Brook Bridge, subsequently protecting Washington’s left flank as the Continental troops advanced into Princeton. During the British counterattack, Mercer’s horse was shot out from under him and he was clubbed in the head with a musket butt. Badly dazed, Mercer fought back with his sword but still received seven serious bayonet wounds before being rescued by his men rescued.

He was carried on a litter to the nearby farm of Thomas Clark. Several army doctors attended to him while Washington arranged for the eminent Philadelphia surgeon Dr. Benjamin Rush to handle the case. Although there was hope he might survive, Mercer died on January 12, his right arm having become severely infected. Mercer’s body was transported into Philadelphia by a hearse that rode over the thick ice that covered the Delaware River; he was interred at Christ Church Cemetery there. By 1840, his grandchildren arranged to have Mercer’s coffin transferred to Laurel Hill Cemetery, also in Philadelphia.

RELATED CONTENT
Categories:
Type:
MAP
TIMELINE
January 17, 1725
Hugh Mercer is born at Pitsligo Kirk, the family farm in Aberdeenshire, Scotland.
1744
By this year Hugh Mercer has obtained a medical degree from the University of Aberdeen, in Scotland.
April 16, 1746
Hugh Mercer participates in the Battle of Culloden, in Scotland.
May 1747
A Jacobite fleeing Scotland, Hugh Mercer arrives in Pennsylvania, residing briefly in Philadelphia.
1754
Hugh Mercer becomes a captain in the 1st Pennsylvania Militia Regiment and serves as a surgeon at Fort Cumberland.
September 1756
During the French and Indian War, Hugh Mercer is wounded in a successful British attack upon the Delaware Indian stronghold of Kittanning.
May 1758
Hugh Mercer, serving with the 1st Pennsylvania Militia Regiment, is promoted to colonel.
November 23, 1758
Hugh Mercer, serving under the British general John Forbes, arrives at the burnt and abandoned French Fort Duquesne.
1761
By this year, Hugh Mercer has quit the militia and relocated to Fredericksburg, where he opens an apothecary shop and medical practice.
ca. 1768
Mary Ball Washington moves to Fredericksburg and sells Ferry Farm to Hugh Mercer.
February 3, 1775
The General Assembly appoints Hugh Mercer colonel in the 3rd Virginia Regiment.
June 5, 1776
The Continental Congress appoints Hugh mercer brigadier general.
October 1776
Hugh Mercer commands rear guard troops covering the Continental army's retreat from New York City into New Jersey.
January 3, 1777
Hugh Mercer is severely wounded at the Battle of Princeton.
January 12, 1777
Hugh Mercer dies of wounds sustained nine days earlier at the Battle of Princeton. He is buried in Philadelphia.
FURTHER READING
CITE THIS ENTRY