In May 1862, McClellan had cautiously maneuvered the Army of the Potomac up the Peninsula—his critics suggested his pace was glacial—taking a month to overcome Confederates at Yorktown (April 5–May 4) and winning another victory at Williamsburg on May 5. Soon he was on the outskirts of Richmond, his forces outnumbering the capital’s beleaguered defenders; victory seemed imminent. While a Confederate attack at Seven Pines failed to secure any tactical gains, it wounded Joseph Johnston sufficiently that he was forced to hand his command over to Robert E. Lee, who before then was known largely for having lost western Virginia to McClellan. While the Union general continued to plod along, Lee sought to seize the initiative.

Lee decided to advance on McClellan’s right wing, which lay north of the Chickahominy River. By launching an attack there, he could push east and attempt to cut Union troops off from their supply depot at White House Landing on the Pamunkey River. A reconnaissance by the flamboyant Confederate cavalryman J. E. B. Stuart had revealed that McClellan’s flank was “in the air,” meaning that it was not anchored on some natural obstacle it could use for defense. Troops under Jackson were to link up with Confederate forces on the Chickahominy River, and then relay word to Confederate general A. P. Hill, who would cross the river, march through Mechanicsville, and attack Union general Fitz-John Porter’s Fifth Corps, positioned behind the waist-deep Beaver Dam Run. Confederate forces under D. H. Hill and James Longstreet would follow him. 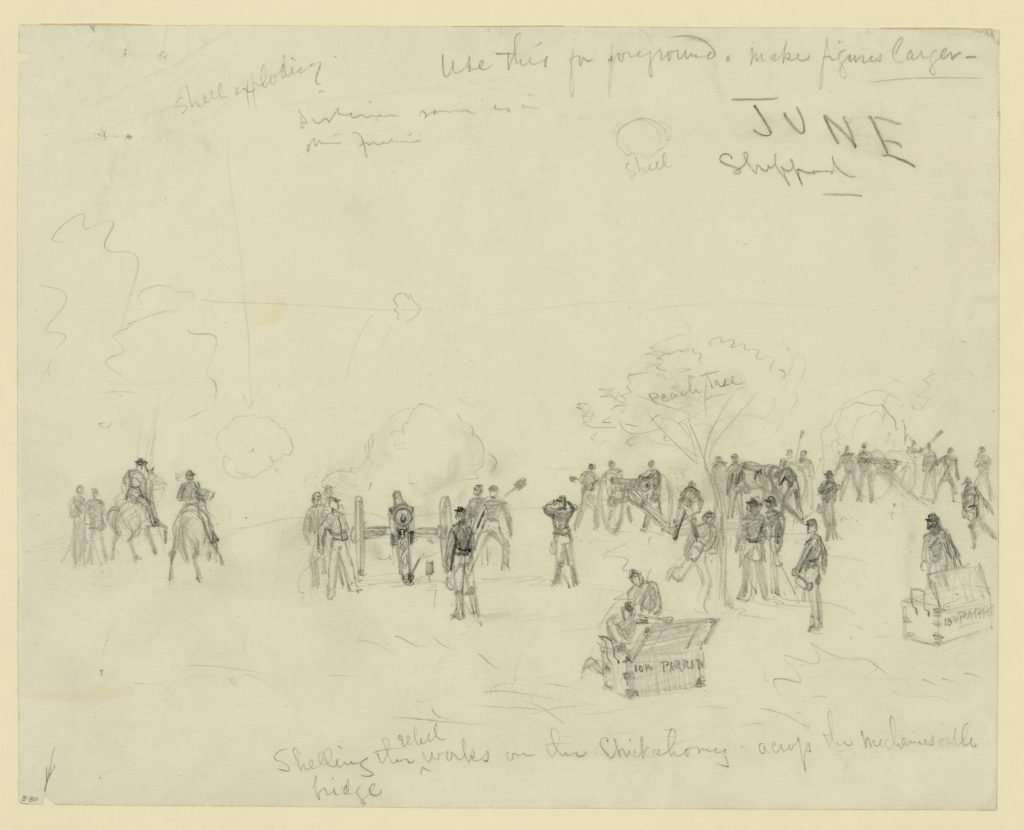 Lee’s intricate plan was immediately thwarted when Jackson’s men, fatigued from the Shenandoah Valley Campaign and their recent march to Richmond, failed to arrive on time. At three o’clock in the afternoon, an impatient and impetuous A. P. Hill attacked anyway, but his men were forced to march across an open field and then wade across the creek before attempting to overcome Union infantry supported by artillery on the high ground. Pennsylvanians under Union general John F. Reynolds pushed Hill’s troops back.

Jackson’s men began to arrive at their designated meeting place, three to four miles from the battlefield, around five o’clock, but instead of joining the fight, Jackson ordered his men to make camp. That left A. P. Hill to attempt another attack at dusk, this time on Porter’s left flank, defended by Union general Truman Seymour. Lieutenant John Hinsdale, an aide to Confederate general Dorsey Pender, described the battle: “I never saw such a storm of shot and shells before. Fragments of shells literally hailed around me. I thought my life was worth very little … The noise was deafening.” By nine o’clock, fighting had tapered off.

The battle was a defeat for the Confederates, who suffered about 1,400 casualties compared to Union losses that numbered less than half that figure. Still, Lee’s aggression—so different from how Joseph Johnston had fought—prompted McClellan to withdraw his army rather than pursue Lee’s. Fitz-John Porter’s Fifth Corps was ordered to retreat to Gaines’s Mill, where Lee attacked it the next day. Jackson’s troops were slow to arrive then, too, but the battle was a Confederate victory. Although the Seven Days’ Battles had just begun, McClellan’s ambitious campaign against Richmond had already failed.