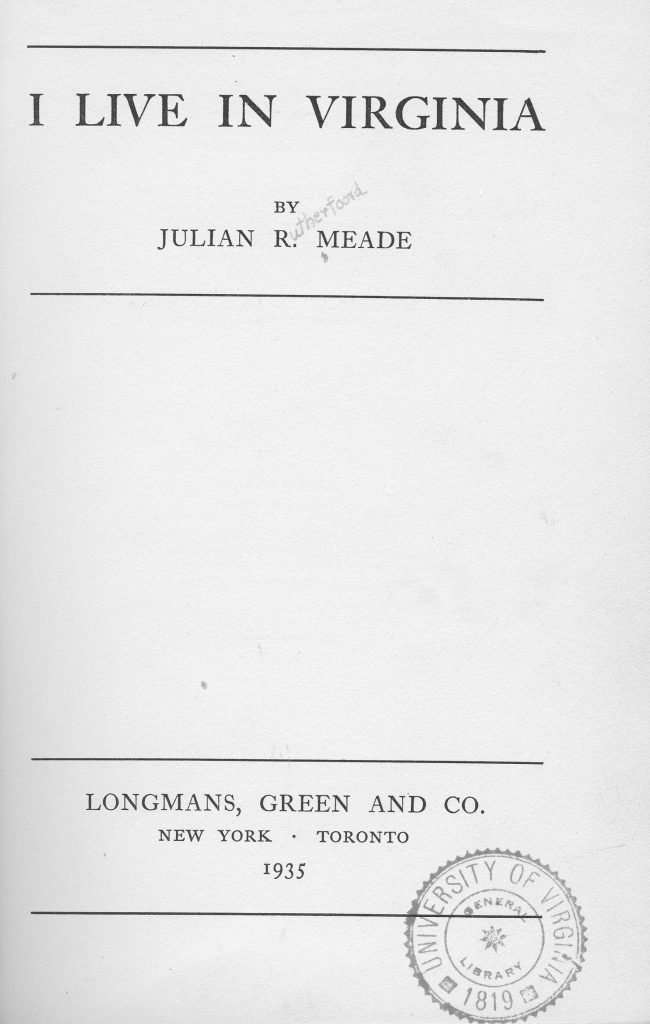 I Live in Virginia

Julian Rutherfoord Meade was born on February 4, 1909, in Danville, the son of a former mayor. He attended the Virginia Military Institute briefly before enrolling at the University of Virginia. Meade’s interest in writing was shared by his older brother, Robert Douthat Meade, who went on to become a prominent historian and biographer of Patrick Henry. After earning bachelor’s and master’s degrees, Julian Meade traveled to France, and then returned to Danville to teach high school English. As a newspaper writer, he covered a textile-mill strike in 1930; this assignment began his publishing career and awakened an interest in chronicling the lives of his fellow Virginians.

That interest resulted in Meade’s travelogue, I Live in Virginia (1935), published when he was twenty-six, which serves as a guide to the state’s medley of landscapes and cultures. In the book’s foreword, Meade states his intention to “tell both sides,” recording observations of people from many different stations in life. Meade recounts his travels through Virginia, notes various regions’ famous attractions, and details the personalities and habits of people who lived in these places. This text is still one of Meade’s most famous. 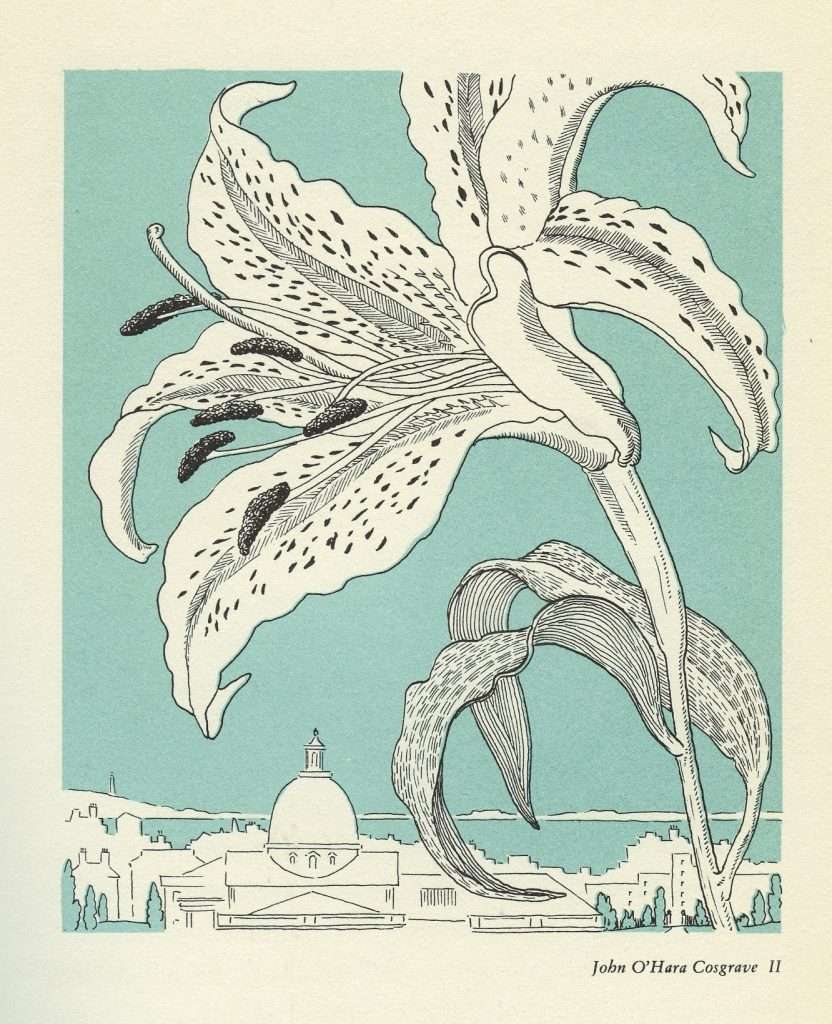 Illustration from Bouquets and Bitters

As Meade built a publishing career, placing articles in the New York Herald Tribune, the New Yorker, Cosmopolitan, and others, he also spent much of his time in his garden. This avid interest informed several of his books, including Adam’s Profession and Its Conquest by Eve (1936), and Bouquets and Bitters, A Gardener’s Medley (1940). In the latter, Meade chronicles both his own garden experiences and his visits to the gardens of notable people, particularly around the East Coast. The book features aquatint illustrations by John O’Hara Cosgrave II. Many of the book’s chapters were originally published as articles in leading magazines, and Meade’s garden writing provided him opportunities for unexpected humor, as in this passage from Bouquets and Bitters: “The process of weeding is more sanative if you name the pests after your own special enemies and pet abominations.” Another of his lines is often included today in collections of quotations about gardening: “The more I hear of Horticulture, the more I like plain gardening.”

Meade is also known as an author of fiction (his 1938 novel The Back Door detailed the lives of black families in turn-of-the-century Virginia) and children’s fiction. In Teeny and the Tall Man (1936), Teeny enjoys playing with Mr. Jones, the tall man of the title, as she can see very far when she sits atop his shoulders. Miss Couch and the Scamps, published in 1938, features African American and interracial children as main characters. One of Meade’s last books, Peter by the Sea was published in 1940 with illustrations by Grace Paull.

Meade received a warm critical reception—once favorably compared to the modernist Thomas Wolfe—and kept a busy schedule giving horticultural lectures, writing for national magazines, and corresponding with literary prominent authors such as Wolfe, Sinclair Lewis, Amélie Rives, and H. L. Mencken. These relationships were not always smooth; at least one unhappy episode, in which Meade insulted Richmond novelist Ellen Glasgow with a published comment about her deafness, is recounted in Susan Goodman’s biography of Glasgow. Meade died after a brief illness on July 9, 1940.

A number of Meade’s unpublished works are held at the University of Virginia. This collection includes such items as an article on Glasgow, letters to Meade from fellow authors, an article on flower legends, and a poem titled “For My Southern Kinsmen.”