In 1607, when English colonists established the settlement at Jamestown, the Mattaponi Indians lived in towns and villages on the middle stretches of the Mattaponi and Pamunkey rivers. The population included, according to English estimates, anywhere from 30 to 140 men. Their principal town, according to John Smith, was called Matapamient, and their tribal name may have translated, roughly, to “Landing Place.” The Mattaponi were one of the six core tribes of Tsenacomoco, a political alliance of Algonquian-speaking Indians led by the paramount chief Powhatan. (By 1607, the alliance numbered between twenty-eight and thirty-two tribes.) 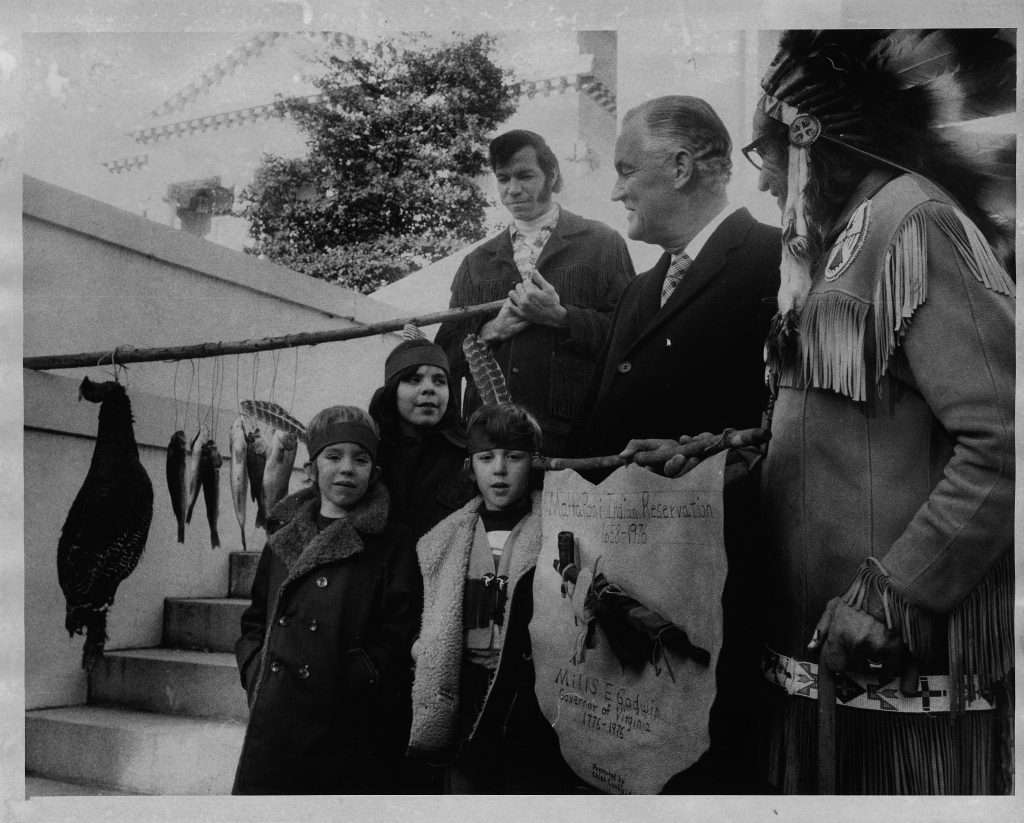 After initially befriending the English, the Mattaponi Indians participated in the assault against English settlements, led by Opechancanough, that began the Second Anglo-Powhatan War (1622–1632). They joined Opechancanough again in the Third Anglo-Powhatan War (1644–1646). The peace treaty concluding that war established a tradition of paying yearly tribute to the Virginia governor that, after being reestablished in 1677, continued into the twenty-first century. (The fourth Wednesday of November is set aside for presentations of fish and game at the State Capitol or Executive Mansion in Richmond.) The treaty also set aside land for the Mattaponi along the Rappahannock River. In 1658, an act of the General Assembly established the Mattaponi Reservation on the western banks of the Mattaponi River.

In 1676, Nathaniel Bacon and his rebels attacked the Mattaponi and other Indians groups, forcing them to retreat to the Dragon Swamp in Gloucester County and killing the tribe’s chief, Yau-na-hah. Sometime after the rebellion ended in 1677, and the Pamunkey chief Cockacoeske signed the Treaty of Middle Plantation, Yau-na-hah’s eldest son, Mahayough, led the Mattaponi back to their reservation. On November 21, 1683, Iroquoian-speaking Indians attacked a number of Virginia Indian tribes, including the Mattaponi, causing many survivors to disperse. Some joined the Pamunkey and Chickahominy Indians.

During the eighteenth and nineteenth centuries, the Mattaponi Indians mixed their native traditions with English habits, largely converting to Christianity. Like other Virginia Indians, they struggled to preserve their identity and culture early in the twentieth century. The Racial Integrity Act of 1924 and subsequent legislation banned interracial marriage in Virginia and asked for voluntary racial identifications on birth and marriage certificates. “White” was defined as having no trace of African ancestry, while all other people, including Indians, were defined as “colored.” To accommodate elite Virginians who claimed Pocahontas and John Rolfe as ancestors, the law allowed for those who had “one-sixteenth or less of the blood of the American Indian and have no other non-Caucasic blood [to] be deemed to be white persons.” The laws essentially erased Virginia Indians as a category of people.

The tribe nevertheless took steps to assert its identity, and on March 25, 1983, Virginia Joint Resolution 54 officially recognized the Mattaponi tribe. It is governed by a chief, an assistant chief, and seven council members. The reservation at West Point includes a small church, a museum, a fish hatchery and marine science facility, and a community tribal building that was formerly the reservation school. The hatchery and marine science facility were funded through grants and individual contributions and support the tribe’s work with American shad.

RELATED CONTENT
Categories:
MAP
TIMELINE
October 1646
The General Assembly confirms the Treaty of Peace with Necotowance, a peace treaty ending the Third Anglo-Powhatan War and creating Native tributaries.
1676
Nathaniel Bacon and his rebels attack the Mattaponi Indians and other Virginia Indian groups, forcing them to retreat to the Dragon Swamp in Gloucester County.
May 29, 1677
Cockacoeske signs the Treaty of Middle Plantation, and at her request several tribes are reunited under her authority. But having been free of Powhatan domination since 1646, the Chickahominy and Rappahannock stubbornly refuse to become subservient to her or to pay tribute.
November 21, 1683
Iroquoian-speaking Indians attack Virginia Indian settlements from Rappahannock to New Kent counties and down the Mattaponi River.
March 20, 1924
Governor E. Lee Trinkle signs "An act to Preserve Racial Integrity," a law aimed at protecting whiteness on the state level. It prohibits interracial marriage, defines a white person as someone who has no discernible non-white ancestry, and requires that birth and marriage certificates indicate people's races.
March 25, 1983
Virginia Joint Resolution 54 extends official state recognition to the Chickahominy tribe, the Eastern Chickahominy tribe, the United Rappahannock tribe, and the Upper Mattaponi tribe. Although Virginia had recognized the Pamunkey and Mattaponi tribes since colonial times, that past recognition was acknowledged by this resolution.
FURTHER READING
CITE THIS ENTRY