John Edward Massey was born on April 2, 1819, in Spotsylvania County. He was the son of Benjamin Massey, a farmer and woodworker who owned a few slaves, and Elizabeth Chewning Massey. His parents were devout Baptists, and his elder brother, Joseph Massey, became a Baptist minister. Massey was educated in schools in Spotsylvania and Louisa counties and attended the Virginia Baptist Seminary (later the University of Richmond) in 1836 and 1841. In 1840 he taught school in Louisa County and then studied law and was admitted to the bar in 1843.

Massey began his law practice in Loudoun County, where he attended Ketoctin Baptist Church, of which his brother was the pastor. Massey had been serious about religion from an early age and soon felt called to the ministry. After he taught school briefly in Kabletown, in Jefferson County, the Ketoctin Church licensed him to preach on November 22, 1844, and he was ordained a minister there on January 15, 1845. Massey preached throughout the northern Shenandoah Valley as a missionary of the Virginia Baptist Association. On August 30, 1847, he married Margaret Ann Kable, of Kabletown. Between 1848 and 1866 they had five sons and two daughters, of whom two sons and one daughter died young. 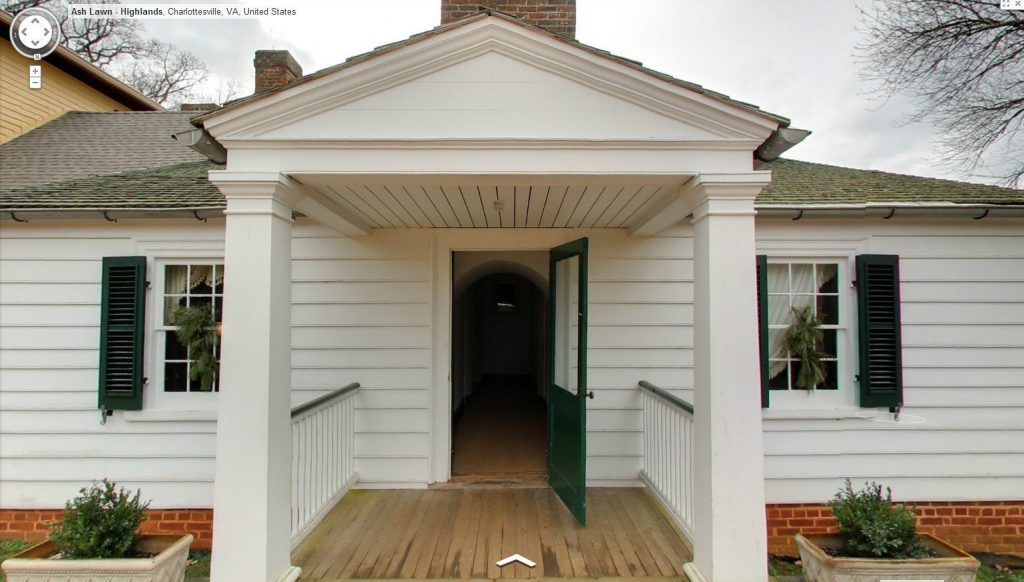 Soon after his marriage, Massey settled in Harrisonburg, where he preached in a rented hall because the town had no Baptist church. In 1854 he became pastor of the Mount Ed Church in Albemarle County and of the Adiel and Hebron churches in neighboring Nelson County. Within a few years, Massey had acquired an Albemarle County farm and fifteen enslaved laborers. In July 1860 he engaged in a five-day debate with another clergyman on the subject of baptism, resulting in the publication of a volume of more than 400 pages on the subject. Massey resigned his pastorates in 1862 ostensibly because of poor health, but he preached in various churches almost every Sunday for the rest of his life and continued to list his occupation as a minister. He was known for the remainder of his life as Parson Massey. In 1863 he purchased Ash Lawn plantation in Albemarle County, which James Monroe had once owned. It remained in the Massey family until 1930.

Originally a Whig, Massey became a Democrat in the 1850s and supported secession in 1861, although he was not politically active while serving as a pastor. During the Civil War he preached to soldiers encamped near his home, bought Confederate bonds, and supplied the army with provisions from his farm. Massey became active in politics early in the 1870s as a member of the Conservative Party of Virginia. In 1871 Massey consented to be a Conservative candidate to represent Albemarle County in the House of Delegates, but later withdrew his name for consideration to support other party contenders.

The question of how to pay off the state’s antebellum public debt led to the adoption of the Funding Act of 1871, an aggressive plan to repay the principal and interest that resulted in repeated budget deficits and a reduction of money available for the new public school system. Massey and others advocated that the debt be refinanced, or readjusted. Massey argued that because the tax base of Virginia had been reduced by the loss of about one-third of the land to West Virginia during the Civil War and by the abolition of slavery, it was unfair for the state’s taxpayers to pay the full principal or the back interest for the war years. His views may have reflected his personal finances, which suffered in the aftermath of the war.

In 1873 Massey won election to the House of Delegates, placing third among the six candidates vying for Albemarle County’s three seats. He won reelection in 1875, again placing third in a tight race. He became one of the leaders among the Readjusters and in 1875 published an influential pamphlet entitled Debts and Taxes, or Obligations and Resources of Virginia that forcefully stated the case for refinancing the debt at a lower rate of interest and reducing the amount of the principal to be paid. In 1877 he won election with 64 percent of the vote to the Senate of Virginia from Albemarle and Greene counties as a Conservative supporter of readjustment. During the 1877–1878 session of the assembly Massey sponsored a bill to require that the money paid into the State Literary Fund be used to finance the public schools as the state constitution required rather than be diverted to pay interest on the debt. The assembly passed the bill, but the Conservative governor vetoed it. The following year Massey strongly opposed the McCulloch Act, which was based on proposals from the state’s creditors and was unpopular with most Readjusters.

In February 1879 Massey attended the state convention that founded the Readjuster Party, welcoming Conservatives, Democrats, Republicans, and also African Americans. Like many white Readjusters Massey appealed to black voters for support while distancing himself from too close an association with African Americans and Republicans. In the general election that autumn, he lost his seat in the state senate, but the new Readjuster majority in the General Assembly elected him auditor of public accounts, responsible for overseeing most of the accounts concerning the day-to-day operation of state government. He took office in January 1880 and began reforming the office’s accounting and disbursement procedures. 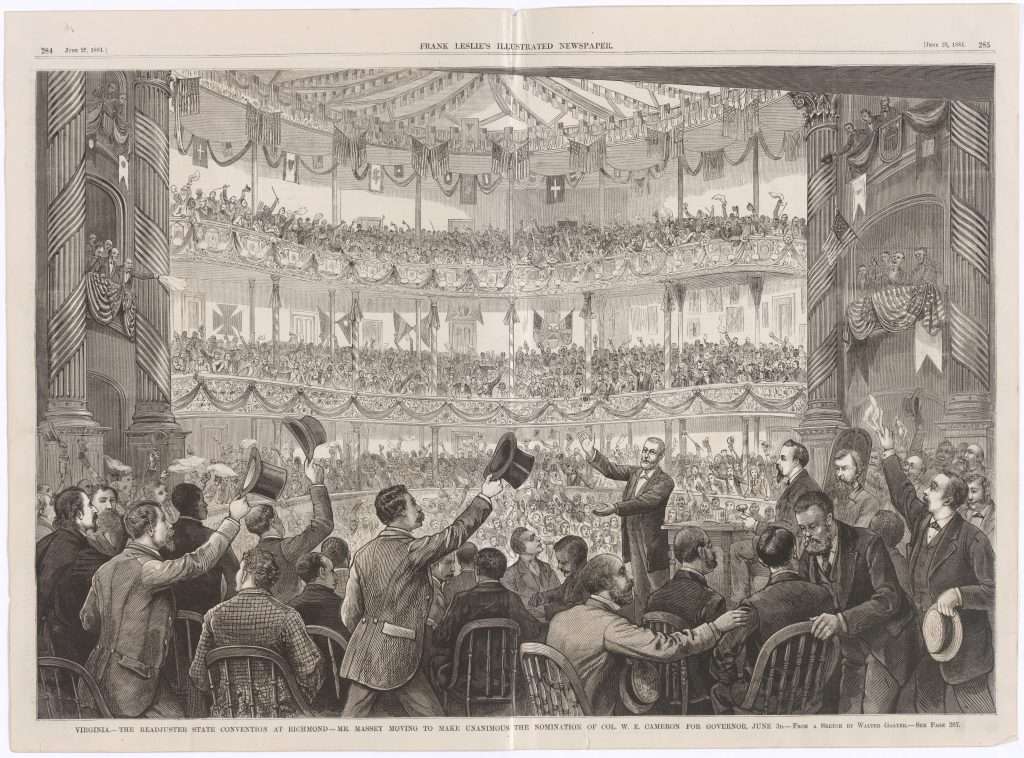 Before the 1881 Readjuster state convention, Massey broke with the party’s dominant figure, U.S. Senator and former Confederate general William Mahone. Both men were strong-willed, opinionated, and ambitious. Massey later asserted that he had turned down an offer from Mahone to ensure Massey’s nomination for governor in 1881 in exchange for a pledge of unconditional support for Mahone’s policies. Mahone, on his part, came to view Massey as an able campaigner but too independent and egotistical to be trusted. At the convention in June, Massey had substantial support and finished second on the first three ballots, but three other candidates backed by Mahone’s allies remained in contention. As the fourth ballot proceeded, some delegates began switching to frontrunner William E. Cameron and Massey, sensing the race lost, then withdrew in favor of Cameron, who won the election that autumn. The clash of ambitions between Massey and Mahone intensified. Massey also resented that the Readjusters in the General Assembly under Mahone’s leadership had elected Mahone instead of him to one of the state’s seats in the U.S. Senate in 1880, and Harrison Holt Riddleberger to the other in 1881. 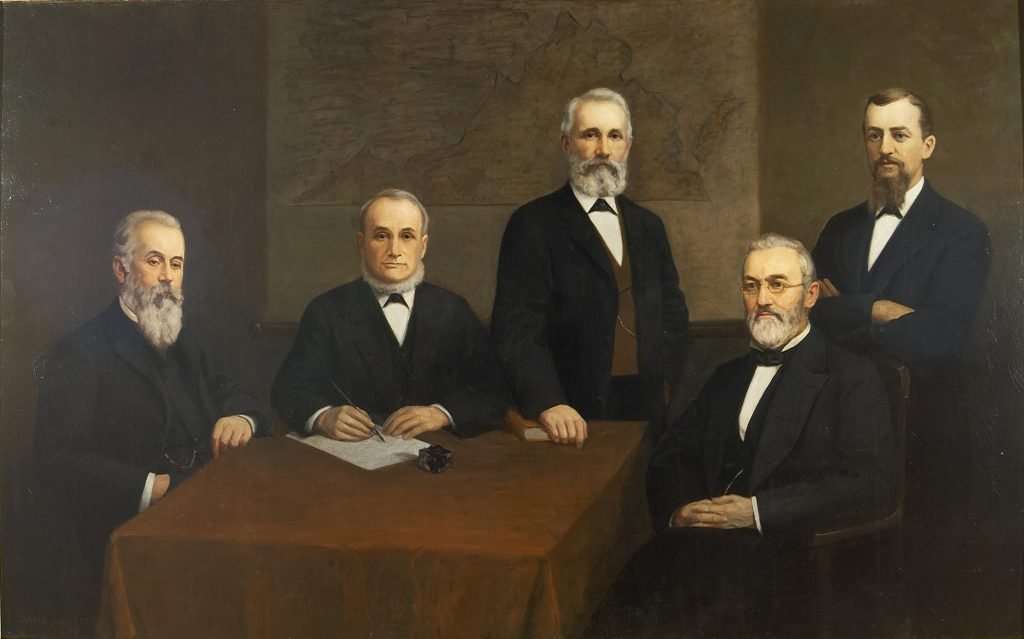 Tensions came to a head in January 1882, when Mahone attempted to enforce a party rule that the Readjuster caucus appoint the clerks in the auditor’s office. Massey refused to conform, attempts at compromise failed, and the assembly elected a new auditor in February. At the same time the state senate investigated charges that Massey might have bribed legislators in his quest for a U.S. Senate seat, but the committee exonerated him.

Massey became the most important and one of the first Readjusters to attack Mahone’s leadership, and he actively cooperated with Readjuster members of the Senate of Virginia, known as the Big Four, who rebelled against Mahone’s party management. Later in 1882, Massey ran against Readjuster John Sergeant Wise for an at-large seat in the U.S. House of Representatives, identifying himself as an independent Readjuster and Democrat. Massey and Wise attacked each other during the election campaign, which Wise won with 50.4 percent of the votes. Massey garnered 47 percent of the vote, while the Republican candidate, former state senator John Montgomery Dawson, received only 2 percent. Massey challenged the result, charging widespread voting fraud, but the House of Representatives refused to unseat Wise.

When Virginia Democrats reorganized in 1883, Massey was an influential member of the platform committee. A powerful speaker, formidable debater, and frequent author of public letters, Massey sought but failed to win the party’s nomination for governor in 1885. The convention nominated him and the voters elected him lieutenant governor on the ticket with Fitzhugh Lee. While he was lieutenant governor, Massey declared that he supported the education of all children of both races but that he believed that disfranchisement of African Americans was necessary in order to keep intelligent and virtuous people in control of state governments and to keep out those he described as ignorant and vicious.

In December 1889 the General Assembly elected Massey superintendent of public instruction and reelected him in 1893. In charge of the public schools of the state and as a member of the state Board of Education, he standardized and promoted summer institutes for training teachers and unsuccessfully proposed that the University of Virginia admit women. Progressive on coeducation, he was much less so on education for African Americans and endorsed a proposal that schools for each race be funded from taxes collected only from members of that race. That plan would have significantly reduced the already low appropriations for African American schools. Massey nevertheless selected the Hampton Normal and Agricultural Institute (later Hampton University) as the site for one of his state-supported summer normal institutes for teacher education. 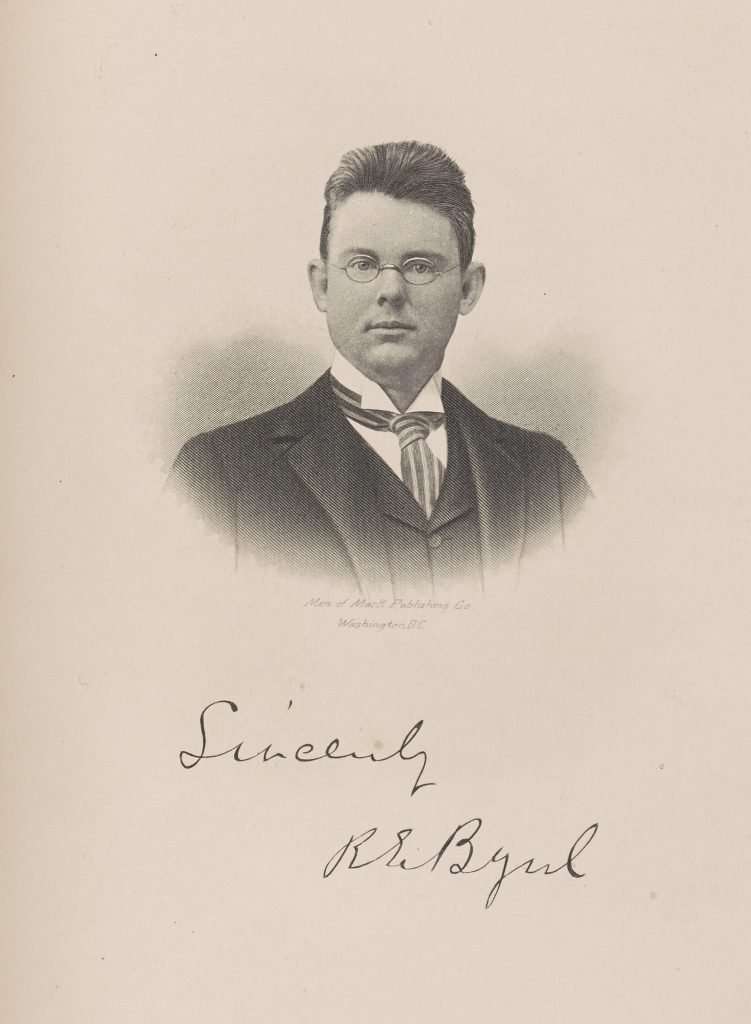 The most-publicized event of Massey’s tenure as superintendent of public instruction followed publication in 1894 of an article in the Norfolk Daily Pilot by Richard Evelyn Byrd (1860–1925), later a Speaker of the House of Delegates and father of Harry F. Byrd Sr., that accused Massey of accepting bribes to give the state’s lucrative textbook contracts to the American Book Company. Massey retaliated with a libel suit against Byrd and the newspaper, which hired Massey’s old opponent John Sergeant Wise as its attorney. In a five-week trial in 1895 involving many important figures in Virginia politics, Wise pried into Massey’s personal finances and called some of his political enemies as witnesses, but Massey won the case and $1,600 in damages. 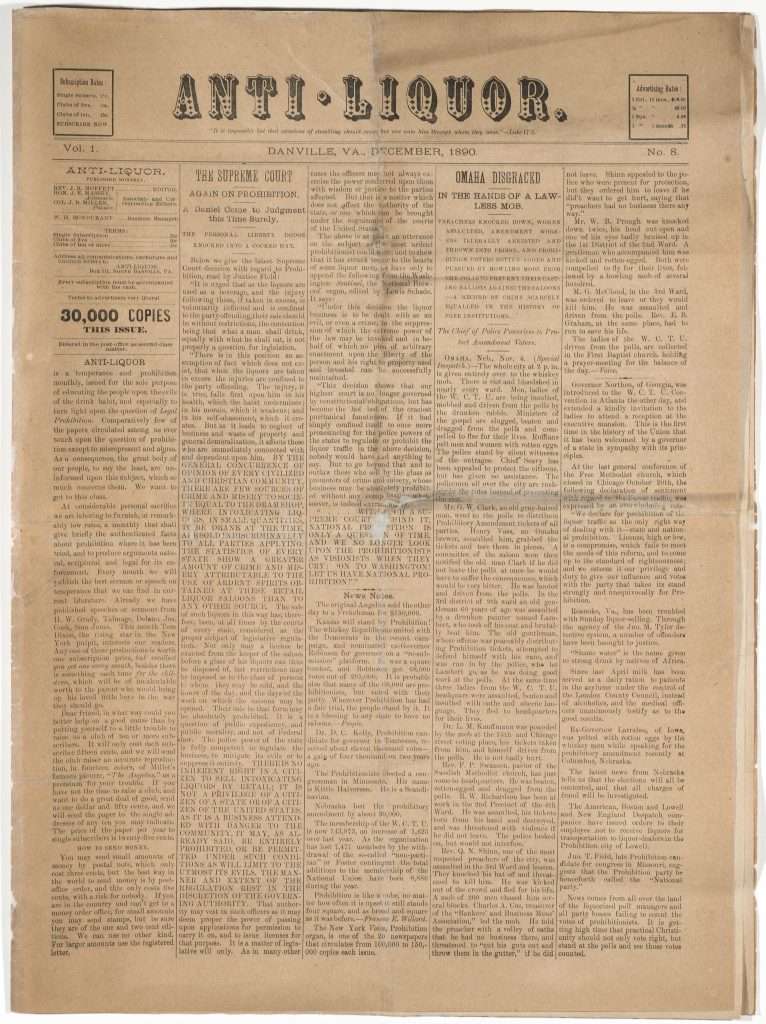 Massey hoped to serve a third term as superintendent of public instruction, but he was narrowly defeated as the Democratic Party’s candidate at its caucus meeting in December 1897. He retired from public life at the age of seventy-eight, but remained active in the Baptist Church and in support of such moral reforms as the temperance movement. While serving as superintendent of public instruction, he joined several temperance advocates as an associate editor of the monthly Danville Anti-Liquor in 1890. In December 1891 he chaired a statewide temperance meeting held in Richmond and the following year he served as president of a short-lived temperance association.

Massey’s wife had died on July 3, 1889, and in Alabama on October 1, 1890, he married Mattie E. McCreary. He returned to politics early in 1901 as a candidate for the Democratic Party’s nomination to one of Albemarle County’s two seats in the state constitutional convention scheduled to meet that summer. Massey died at his home in Charlottesville on April 24, 1901, two days after winning the nomination. His funeral was held at First Baptist Church of Charlottesville, where he had frequently preached, and he was buried in the city’s Oakwood Cemetery.

His autobiography was published posthumously in 1909.