Magruder was born on September 14, 1854, to Sarah Sawyer Magruder and Allen Bowie Magruder, an attorney. She was the niece of John Bankhead Magruder, the Confederate general who, during the American Civil War (1861–1865), successfully defended Richmond from attack by Union forces under the command of Major General George B. McClellan in 1862. When Julia was three years old, the family moved to Washington, D.C. There she was educated by her parents and governesses, but often returned to Virginia. When she was eighteen years old, she published her first short story and won $300 in a contest sponsored by the Baltimore Sun. Her family was surprised to learn of this honor. 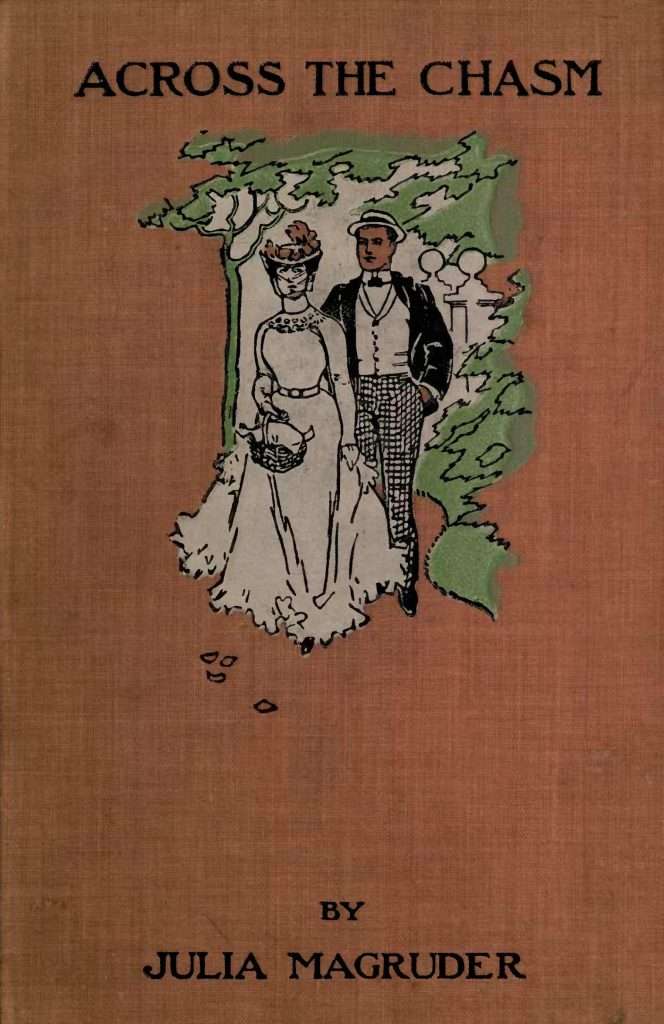 Magruder went on to publish sixteen novels, many of which feature illustrations by the noted American illustrator Charles Dana Gibson. Her novel Across the Chasm was published anonymously in 1885 and, according to Magruder’s obituary in the New York Times (June 10, 1907), the novel “soon earned the reputation of being ‘the best of the year.'” The Times went on to quote a review of the novel in the London Saturday Review: “Its great merit is that it sets forth some of the differentiating peculiarities of the best people of the North and the South. It is as fair to one side as to the other. It is also full of clever comedy and rich in contrasted character.”

Many of Magruder’s short stories were published in the most popular magazines of the time, including Ladies’ Home Journal, and her children’s books include such titles as Child Sketches from George Eliot: Glimpses at the Boys and Girls in the Romances of the Great Novelist(1895). She also wrote essays on serious social issues, such as child labor laws and women’s changing roles in the early twentieth century. “The Southern Girl: Julia Magruder, the Clever Novelist of Dixie-land, Tells of the Sweet-Voiced Damsels of Her Home,” published in New York by Bok Syndicate Press in 1894, describes southern women in such a way that their faults seem charming to northern readers. Though a southern woman may have less schooling and less prudish mannerisms than her northern counterpart, for example, she is always friendly and puts people at ease. Though Magruder was a great supporter of southern culture, ultimately she sought to resolve ongoing misunderstandings between North and South.

Despite the popularity of her writing, some critics found Magruder’s work overly sentimental. The Chicago Daily Tribune skewered Miss Ayr of Virginia and Other Stories (1896) in a January 29, 1897, review: “It still remains for Miss Julia Magruder to prove she can produce anything above the ‘Heart to Heart Talks About Pillow Shams’ order of literature.” Referring to Edward Bok, the editor of Ladies’ Home Journal, the review continued: “The book may charm the seminary orchids of femininity for whom Mr. Bok’s monthly is law and gospel, but the healthy omnivorous reader will not care to cut the pages beyond the end of the initial story which gives its title to the volume.”

Magruder maintained a home in Washington, D.C., but traveled widely and often stayed with friends or family for extended periods. She spent considerable time with her friend Amélie Rives, Princess Troubetskoy, a novelist, poet, and playwright, either at Rives’s home, Castle Hill, in Albemarle County, or at her residence on Lake Maggiore, in northern Italy. Magruder spent much of her time writing while visiting her sister, Emily Gibson, in Concord, North Carolina.

Julia Magruder died of Bright’s disease, now known as kidney disease, in Saint Luke’s Hospital, in Richmond, on June 9, 1907. She is buried next to her parents in Charlottesville’s Maplewood Cemetery.

RELATED CONTENT
Categories:
Type:
MAP
TIMELINE
September 14, 1854
Julia Magruder is born in Charlottesville.
1885
Across the Chasm, written by Julia Magruder, is published anonymously and soon acclaimed as one of the best novels of the year as well as one of Magruder's best works.
1894
Bok Syndicate Press in New York publishes "The Southern Girl: Julia Magruder, the Clever Novelist of Dixie-land, Tells of the Sweet-Voiced Damsels of Her Home," one of several essays that focused on social issues.
June 9, 1907
Julia Magruder, author of numerous essays, short stories, and novels, dies in Richmond.
FURTHER READING
CITE THIS ENTRY