Born on August 21, 1830, Magill was the daughter of Ann Evelina Tucker, the daughter of U.S. Congressman, Virginia jurist, and law professor Henry St. George Tucker (1780–1848); and a university professor, Dr. Alfred T. Magill. Mary Magill spent her childhood in Jefferson County, in what is now West Virginia. She received her education in Richmond and Charlottesville, at the University of Virginia, where her father was a professor of medicine. In 1848 Magill moved with her sister and their mother to Winchester. In 1866, when her mother established the Valley Female Seminary there, Magill became one of its first instructors.

Magill’s first two novels, The Holcombes: A Story of Virginia Home-Life (1871) and its sequel, Women: Or Chronicles of the Late War (1871), reveal her position as an apologist for the Old South. The Holcombes looks back on the idealized life of a Virginia plantation family in the peaceful years leading up to the Civil War. Women, described by Magill herself as a “story of the ‘Lost Cause,'” depicts women’s contributions and difficulties during the Civil War. Her textbook, The History of Virginia for the Use of Schools (1873), written for students in the fourth and fifth grades, portrays Virginia’s founding fathers as wise aristocrats. Because the Virginia State Board of Education required its use in teaching Virginia history for more than forty years, Magill’s textbook shaped the historical perspective of several generations of Virginians. Magill also wrote a history of the state for younger children, published under two different titles: Stories from Virginia History, for the Young (1897) and Magill’s First Book in Virginia History (published posthumously, in 1908). 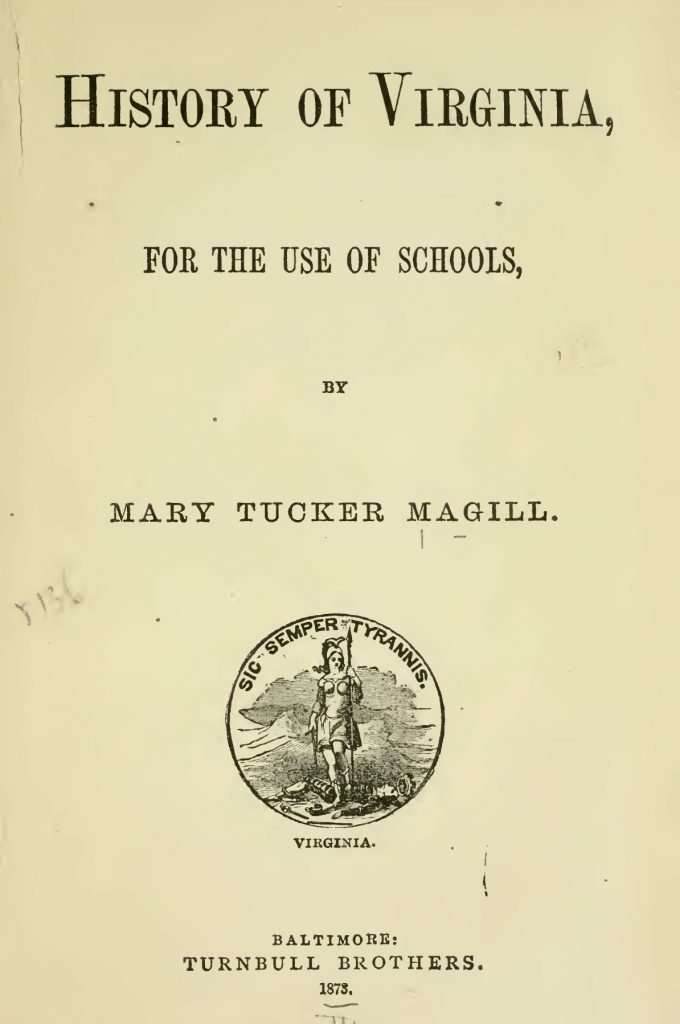 History of Virginia for the Use of Schools

As an early advocate of exercise for women, Magill demonstrated her versatility as a teacher and writer in 1882, when she published a physical education textbook, Pantomimes; Or, Wordless Poems, For Elocution and Calisthenic Classes, which she developed while teaching what she called the “science of elocution.” Pantomimes included an essay on “elocution,” along with instructions and line-drawings illustrating the gestures and dance-like pantomimes to be performed by the students, to music by the American composer Leopold Fuenkenstein. The book’s preface, endorsing Magill’s method, was written by Dioclesian Lewis, a nationally renowned nineteenth-century advocate of physical education and author of The New Gymnastics for Men, Women, and Children (1864).

Magill addressed plantation life once again in her third novel, a moralistic tale, Under the Pruning Knife: A Story of Southern Life (1888). Magill’s short stories appeared in national journals, including two published in Harper’s New Monthly Magazine. Her satire “A Georgian at the Opera” (June 1885), written in dialect, describes a naïve southerner’s first visit to New York City; “Sis,” on the relationship between a black nurse and her white charge in the so-called New South, appeared in Harper’s January 1886 issue.

RELATED CONTENT
Categories:
Type:
MAP
TIMELINE
August 21, 1830
Mary Tucker Magill is born.
1866
After her mother establishes the Valley Female Seminary in Winchester, Mary Tucker Magill becomes one of the school's first teachers.
1873
Mary Tucker Magill's textbook, The History of Virginia for the Use of Schools, is published. Though its portrayals of Virginia were sometimes anachronistic, it was used in Virginia schools for more than forty years.
1899
Author and educator Mary Tucker Magill dies.
FURTHER READING
CITE THIS ENTRY