Madison was born about 1696 in King and Queen County, the son of John Maddison, a ship’s carpenter and later county justice and sheriff, and Isabella Todd Maddison. No birth records for Madison exist, but a surviving financial record indicates he was of legal age in 1717, meaning he could have been born no later than 1696. The Maddison family had been in Virginia since at least 1653, when John Maddison, an English immigrant, patented land in Gloucester County. Ambrose Madison’s generation dropped the surname’s second d.

Nothing is known of Madison’s early years or education. His father owned land and likely was wealthy. On July 7, 1721, Madison purchased from the merchant John Baylor, among other things, “1 Super fine hatt” and “2 negro women off the Ann & Sarah” for more than 192 pounds. According to the historian Ann Miller, he “was dealing in large sums of money,” especially for a young man, and he paid his debts quickly and in full.

On August 24, 1721, Madison married Frances Taylor, the daughter of Colonel James Taylor, a surveyor in King and Queen County. The couple had two daughters and one son, James Madison Sr. Colonel Taylor had long been interested in the Piedmont region of Virginia, exploring what became Orange County as early as 1704–1705 and in 1716 joining the Knights of the Golden Horseshoe expedition, organized by Lieutenant Governor Alexander Spotswood to cross the Blue Ridge Mountains into the Shenandoah Valley. In 1721, Taylor was hired by several men to survey 20,000 acres of land in Spotsylvania County, and as payment he received 4,675 acres located along the Southwest Mountains in what later became Orange County, adjoining property he already owned. He claimed the land in the names of his two sons-in-law, Ambrose Madison and Thomas Chew. Required by law to improve the land, Madison sent a team mostly of enslaved laborers to clear his portion and begin planting tobacco.

In the meantime, Madison acquired land in Spotsylvania and Caroline counties and worked as a merchant, mostly in Caroline County. In July 1727 he engaged in land speculation, purchasing 863 acres in Spotsylvania County for 80 pounds and selling a month later for double the price. In 1728 he purchased 3,333 acres that included the site of present-day Gordonsville, calling the estate Black Level. In her short biography, Miller describes Madison as “somewhat tightfisted if not downright parsimonious” but still an “established, prosperous, [and] reasonably well-educated member of the gentry.” 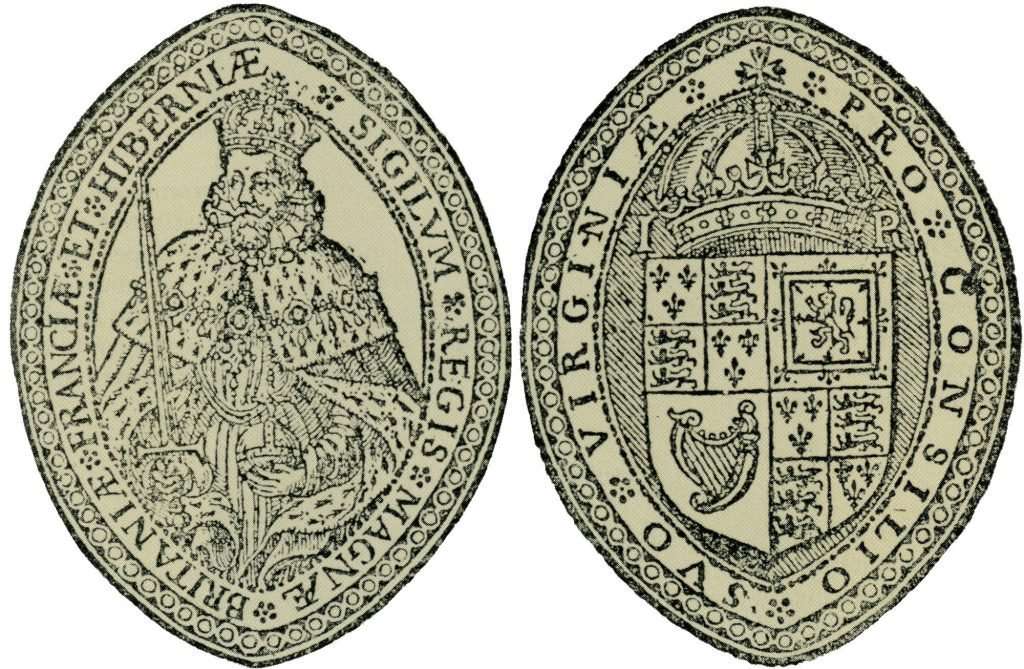 Seal of the Governor’s Council

In 1728, William Todd, one of the men who hired Taylor, Madison’s father-in-law, to survey their 20,000 acres formally accused Taylor of fraud, and Taylor, Madison, and Chew all appeared before the governor’s Council in Williamsburg. A second survey was done and no fraud found. The bad feelings continued over the years and through at least one additional court case.

In the spring of 1732, probably in coordination with Thomas Chew, Madison sold all of his land in Caroline County and moved his family from their home there to the acreage along the Southwest Mountains. In April he was one of six partners in a 10,000-acre patent called Brookesby, in Greene County, eleven miles west of what would become Montpelier. In all Madison held more than 10,000 acres and built a plantation complex he called Mount Pleasant. Twenty-nine enslaved people—including ten men, five women, and fourteen children—worked the land and served the family. 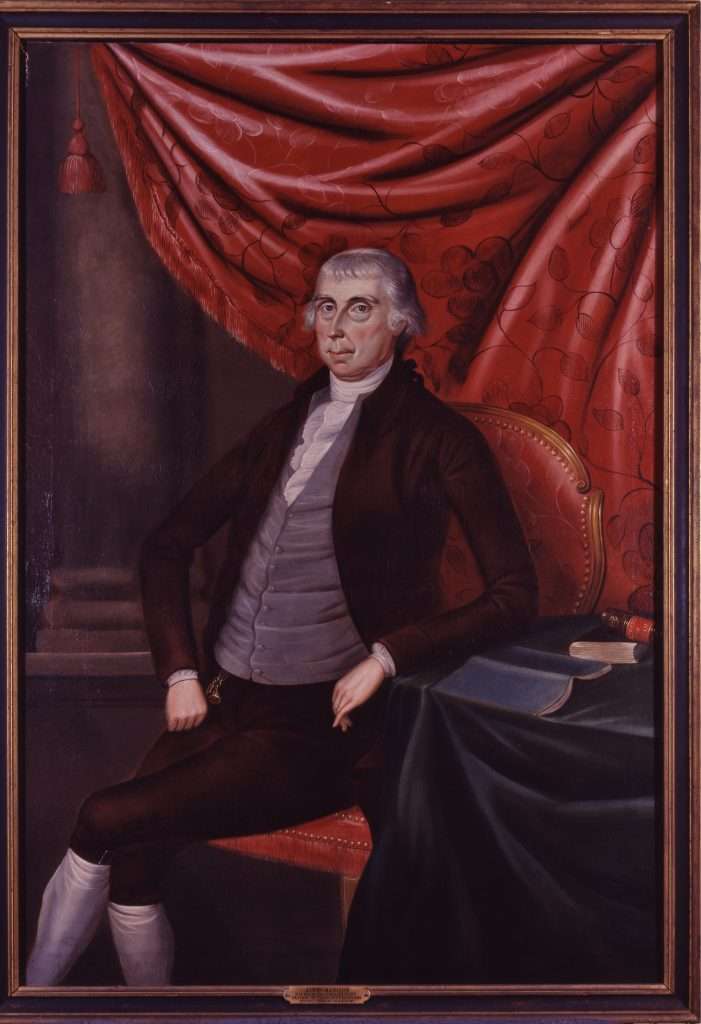 Sometime in June or July 1832 Madison began to feel ill, and when his condition worsened, he wrote his will on July 31, 1732. He divided his land among his children, with the plantation going to James Madison Sr. when he reached age eighteen. He was then nine. On August 22, three enslaved people were arrested on “Suspition of Poysoning” Madison. Pompey was owned by Joseph Hawkins, a neighboring farmer, while Turk and a young woman named Dido were both enslaved by Madison. Five days after the arrest, on August 27, Madison died at Mount Pleasant and was buried in the family cemetery there.

On September 6, 1732, the three enslaved people were tried and convicted of “feloniously Conspiring the Death” of Ambrose Madison. Pompey was hanged that day and his appraised value of £30 reimbursed to Hawkins. The other two received twenty-nine lashes each before being returned to Madison’s widow. According to the historian Douglas B. Chambers, it was the “first known conviction of slaves for the use of poison against their master in Virginia.” The motives for the murder remain unknown. Turk’s name disappears from records shortly after, suggesting he may have been sold. The name Dido, however, appears frequently over the years. “It is likely, therefore,” Chambers writes, “that the central message of the murder (about the limits of the master’s power and of the slaves’ resistance to it) echoed for a long time among the descendants of both free and slave at Montpelier.”

RELATED CONTENT
Categories:
Type:
MAP
TIMELINE
ca. 1696
Ambrose Madison is born in King and Queen County, the son of John Maddison and Isabella Todd Madison.
July 7, 1721
Ambrose Madison purchases from John Baylor, a King and Queen County merchant, "1 Super fine hatt" and "2 negro women off the Ann & Sarah" for more than 192 pounds.
August 24, 1721
Ambrose Madison and Frances Taylor marry in King and Queen County. They will have a son and two daughters.
1723
Colonel James Taylor patents 4,675 acres along the Southwest Mountains in what later becomes Orange County, doing so in the names of his sons-in-law Ambrose Madison and Thomas Chew.
July 1727
Ambrose Madison purchases 863 acres of land in Spotsylvania County from Major Augustine Smith for 80 pounds. He sells a month later for almost twice that amount.
1728
Ambrose Madison purchases 3,333 acres of land, including the site of present-day Gordonsville. He calls the property Black Level.
1728
William Todd accuses Colonel James Taylor of fraud committed while surveying 20,000 acres of land in the Piedmont region. A second survey is done and no fraud found.
Spring 1732
Ambrose Madison, Thomas Chew, and their families move from Caroline County to their new land along the Southwest Mountains in what later becomes Orange County.
April 1732
Ambrose Madison is one of six partners in a 10,000-acre patent called Brookesby, in Greene County.
June—July 1732
Ambrose Madison falls ill, possibly due to the effects of being poisoned.
July 31, 1732
Ambrose Madison writes his last will and testament, dividing his land among his children. He leaves his plantation, Mount Pleasant, to his son, James Madison Sr.
August 22, 1732
Three enslaved people are arrested on "Suspition of Poysoning" Ambrose Madison.
August 27, 1732
Ambrose Madison dies at Mount Pleasant, his estate in the part of Spotsylvania County that later becomes Orange County. He is buried two days later in the family cemetery.
September 6, 1732
Three enslaved people—Pompey, Turk, and Dido—are tried and convicted of "feloniously Conspiring the Death" of Ambrose Madison. Pompey is hanged the same day. Turk and Dido are given twenty-nine lashes.
FURTHER READING
CITE THIS ENTRY