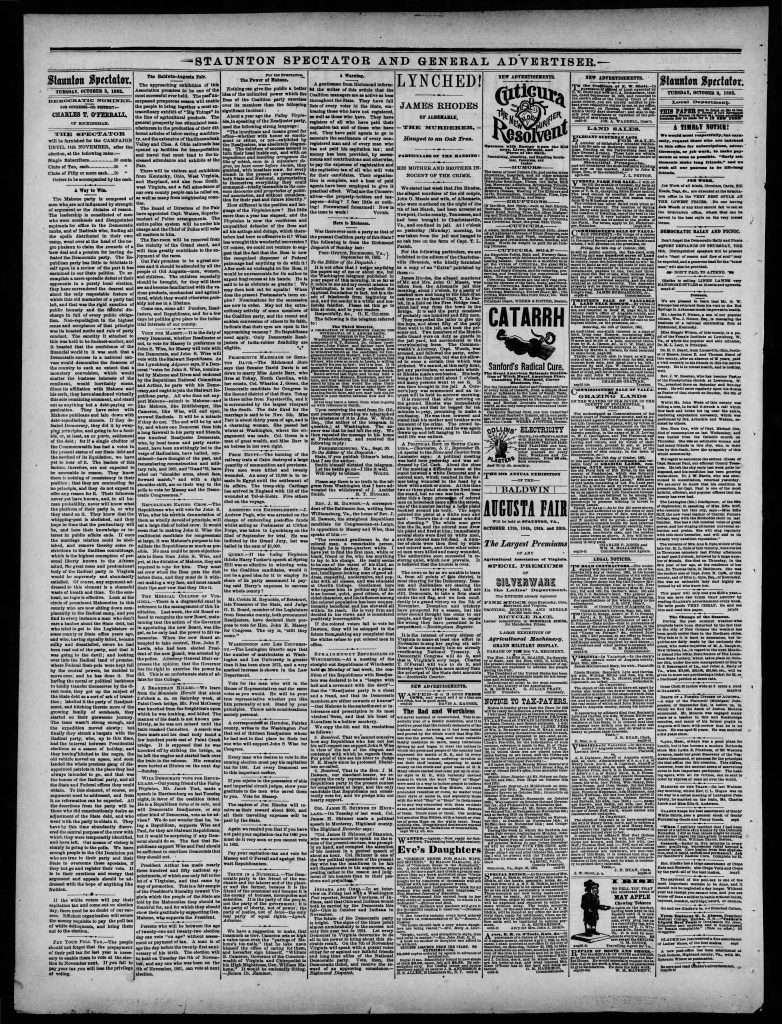 Hanged to an Oak Tree.

HIS MOTHER AND BROTHER INNOCENT OF THE CRIME.

We stated last week that Jim Rhodes, the alleged murderer of the old couple, John O. Massie and wife, of Albemarle, who were murdered on the night of the 7th of last March, had been arrested at Newport, Cocke county, Tennessee, and had been brought to Charlottesville, Va., and confined in jail. At 1 o'clock on yesterday (Monday) morning, he was taken from the jail and hanged to an oak tree on the farm of Capt. T. L. Farish.

For the following particulars, we are indebted to the editors of the Charlottesville Chronicle, who kindly furnished us a copy of an "Extra" published by them:—

James Rhodes, the alleged murderer of Mr. and Mrs. John O. Massie, was taken from the Albemarle jail this morning, about 1 o'clock, by a party of masked men and hung to the limb of an oak tree on the farm of Capt. T. L. Farish, in a field on the Free Bridge road, about half way from the town to the Bridge. It is said the party consisted of probably one hundred and fifty men.

They compelled the jailor to give up the keys, and about fifty of the party then went to the jail, and took the prisoner out. Two members of the Monticello Guard were on duty as guards in the jail yard, but surrendered to the overwhelming force. The Commonwealth's Attorney, Capt. Woods, was aroused, and followed the party, ordering them to disperse, but was not allowed to cross a certain line which was picketed. We cannot, at this early hour, get any particulars, or ascertain whether Rhodes made a confession. His body hung to the limb until about 7 o'clock, and many persons went to see it. It was then brought to the jail. A Coroner's jury was summoned and an inquest will be held to-morrow morning.

It is rumored that after arriving on the ground, Rhodes was immediately strung up, and that he begged for ten minutes to pray, promising to make a confession. He was then lowered and stated that his mother and brother were innocent of the crime. The crowd began to press, however, and he was again drawn up and left hanging to the limb until life was extinct.