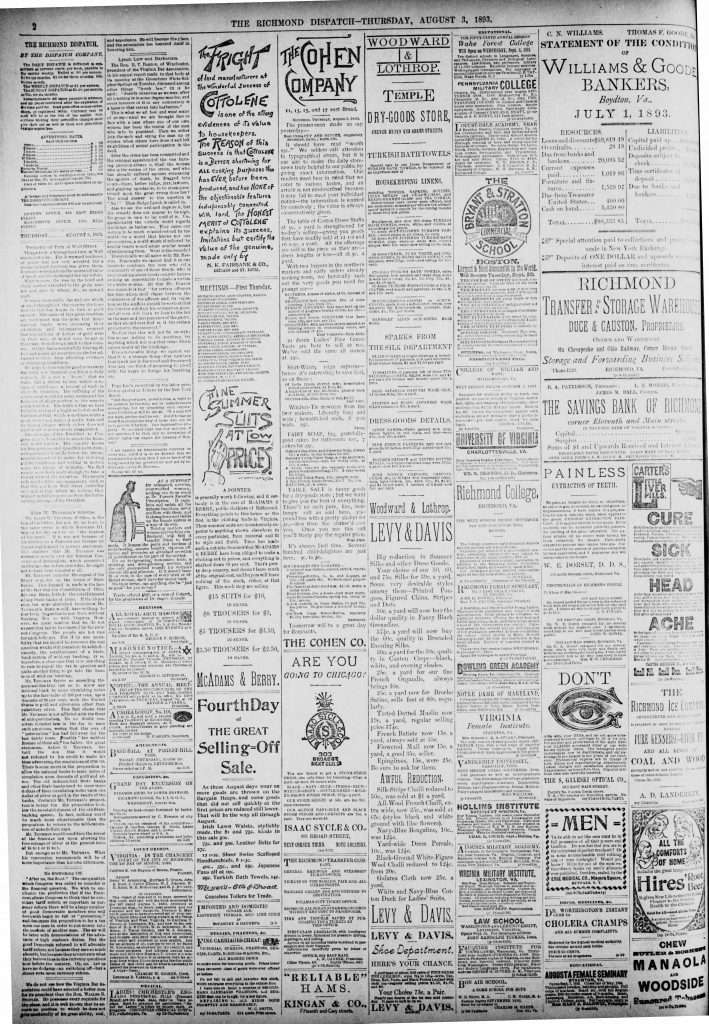 The Hon. R. T. Barton, of Winchester, president of the Virginia Bar Association, in his annual report made to that body at its meeting at the Greenbrier White Sulphur Springs on Tuesday, discussed among other things "lynch law." Of it he said: "Justify ourselves as we may, after all lynching is in some degree murder, and every instance of it in any community is a lapse to that extent into barbarism."

This is what we all feel and what many of us say—until we are brought face to face with a Plecase where one of our own women has been the victim of the man who is to be punished. Then we either join the mob and string the man up or rejoice when others have done it and left us guiltless of actual participation in the deed.

After the crime has been committed and the criminal apprehended the one burning question is, Shall the woman who is the victim of the crime, and who has already suffered agonies surpassing the agonies of death, be dragged into court—there, before judge, jury, lawyers, and giggling spectators, to be cross-questioned upon the great wrong done her? The usual answer to this question is "No!" Then Judge Lynch is called in.

Alas we see the evil and deplore it, but the remedy does not appear to be nigh. We grope in vain to lay hold of it. Unquestionably the outside world regards lynchings as barbarous. They cause our section to be much misunderstood by the world—by a world that knows not our provocation, a world which if infested by similar beasts would adopt similar means of extirpating them. Why is the remedy?

Theoretically we all agree with Mr. Barton. Practically we cannot find it in our hearts to condemn the men who rid a community of one of those fiends who is ever sneaking about lonely country houses seeking an opportunity to make a victim of a white woman. All that Mr. Barton recommends is that "for certain offences the time which shall elapse between the commission of the offence and its expiation on the scaffold should be so short that the lyncher will find his occupation gone, and all men will learn to look to the law as the sure and just punisher of the guilty, as they should ever find in it the certain protector of the innocent."

We fear that this will not be enough; but we are willing to do anything, try anything which will stop that crime which causes nearly all the lynchings.

It is a noticeable thing—we cannot say that it is a strange thing—that nowhere that lynch law is discussed and denounced does any one think of proposing to plead with the negro to forego his besetting sin.