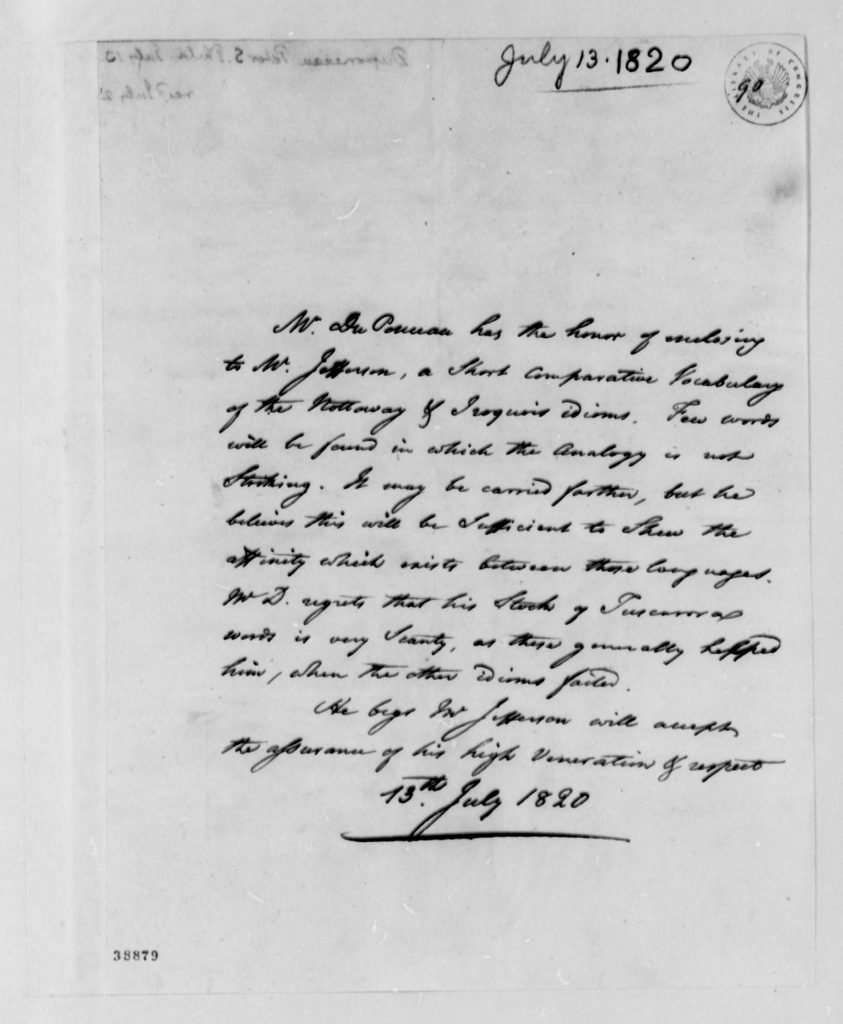 Mr Du Ponceau has the honor of enclosing to Mr Jefferson, a Short Comparative Vocabulary of the Nottoway & Iroquois idioms. Few words will be found in which the Analogy is not Striking. It may be carried farther, but he believes this will be Sufficient to Shew the affinity which exists between those languages. Mr D. regrets that his Stock of Tuscarora words is very Scanty, as these generally helped him, when the other idioms failed. 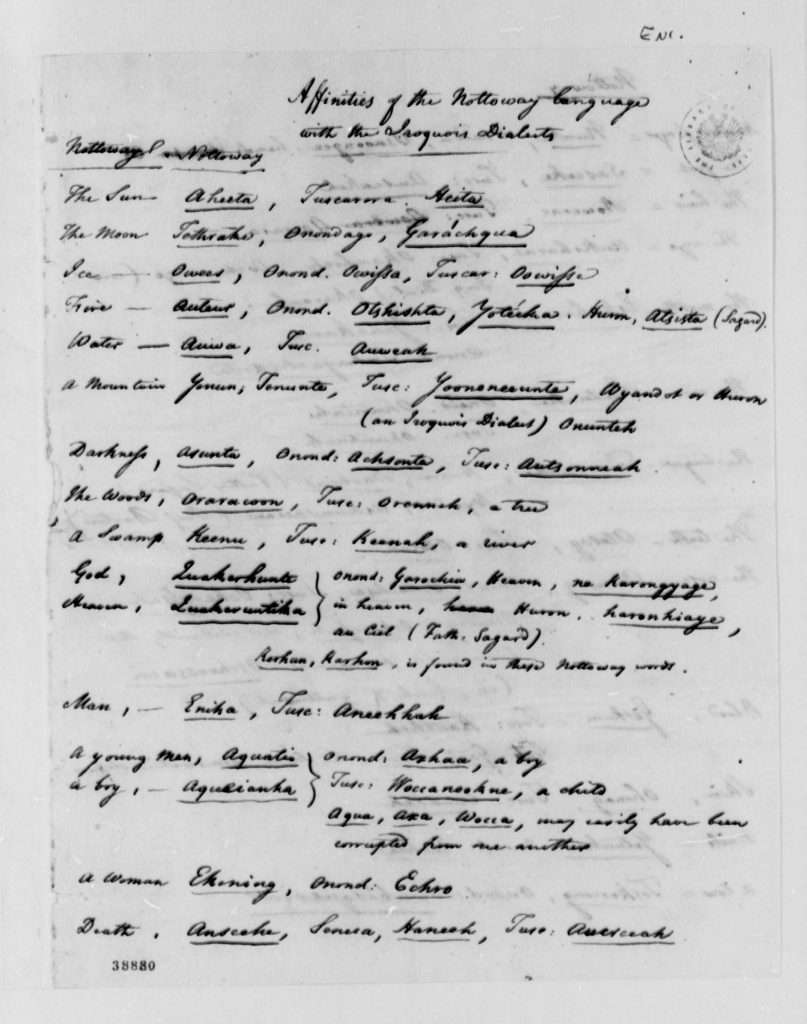 Affinities of the Nottoway language with the Iroquois Dialects

a boy, Aqueianka Tusc: Woccanookne, a child Aqua, Axa, Wocca, may easily have been corrupted from one another 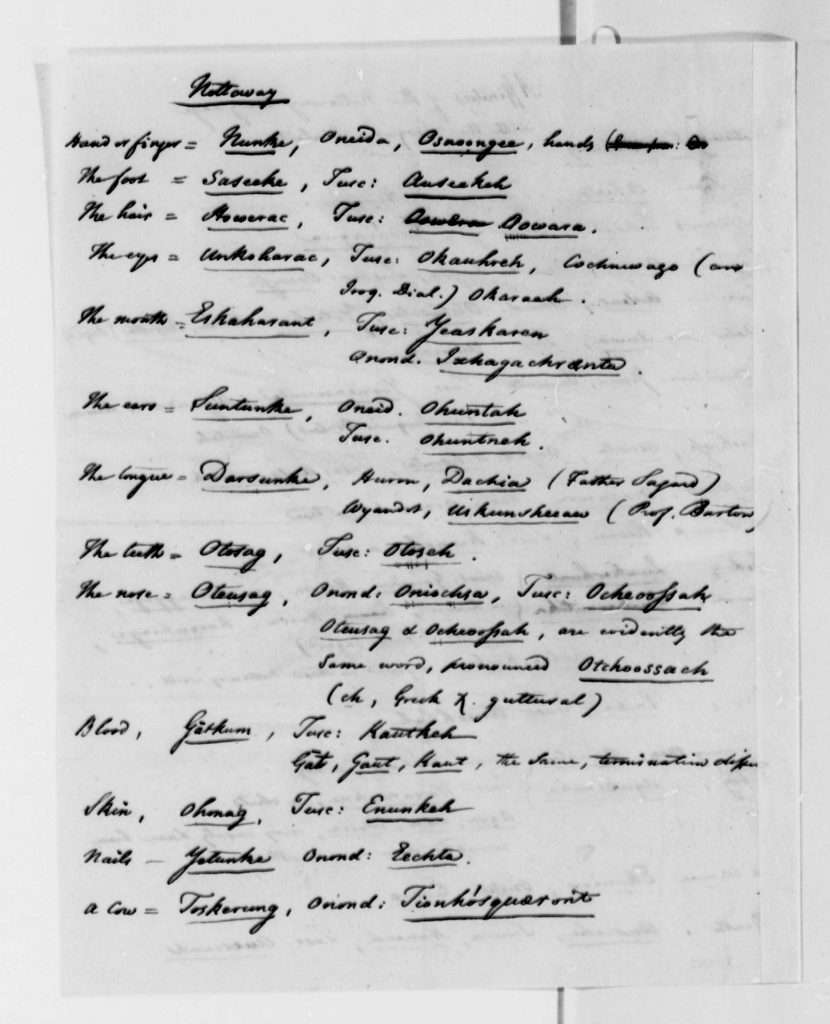 A House, Onushag, Oneida, Kanoughsaw Mohawk, Kanoughsagough Onondago, Ver. 7. With good Will doing Service: And to help them herein, they are to consider, that it is to the Lord, and not unto Men. God has commanded Servants thus to obey their Masters; and therefore the Obedience they pay, is to God, which may well make them do it chearfully, how harsh or unworthy soever the Master be, especially if what the Apostle farther urgeth, Ver. 8. be considered, That there is a Reward to be expected from God for it.

26. The second Duty of the Servant is Faithfulness, and that may be of two Sorts; One, as opposed to Eye-service, the other to Purloining or Defrauding. The first Part of Faithfulness is the doing of all true Service to his Master, not only when his Eye is over him and he expects Punishment for the Omission, but at all Times, even when his Master is not likely to discern his Failing; and that Servant that doth not make Conscience of this, is far from being a faithful Servant, this Eye-service being by the Apostle set opposite to that Singleness of Heart which he requires of Servants, Ephes. vi. 5. The second Sort of Faithfulness consists in the honest Management of all Things intrusted to him by his Master, the not Wasting of his Goods (as the unjust Steward was accused to have done, Luke xvi.) whether by careless imbezelling of them, or by converting any of them to his own Use without the Allowance of his Master. This latter is that purloining of which the Apostle warns servants, Tit. ii. 10. and is indeed no better than arrant Theft: of this Kind are all those Ways, that the Servant hath of gaining to himself by the 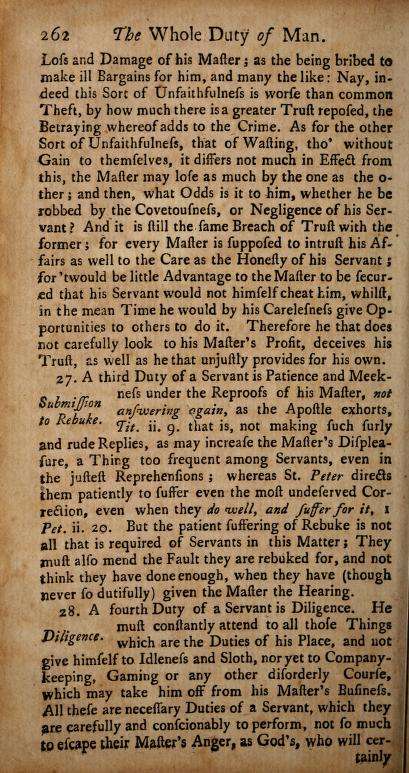 Loss and Damage of his Master; as the being bribed to make ill Bargains for him, and many the like: Nay, indeed this sort of Unfaithfulness is worse than common Theft, by how much there is a greater Trust reposed, the Betraying whereof adds to the Crime. As for the other Sort of Unfaithfulness, that of Wasting, tho’ without Gain to themselves, it differs not much in Effect from this, the Master may lose as much by the one as the other; and then, what Odds is it to him, whether he be robbed by the Covetousness, or Negligence of his Servant? And it is still the same Breach of Trust with the former; for every Master is supposed to intrust his Affairs as well to the Care as the Honesty of his Servant; for ‘twould be little Advantage to the Master to be secured that his Servant would not himself cheat him, whilst, in the mean Time he would by his Carelessness give Opportunities to others to do it. Therefore he that does not carefully look to his Master’s Profit, deceives his Trust, as well as he that unjustly provides for his own.

27. A third Duty of a Servant is Patience and Meekness under the Reproofs of his Master, not answering again, as the Apostle exhorts, Tit. ii. 9. that is, not making such surly and rude Replies, as may increase the Master’s Displeasure, a Thing too frequent among Servants, even in the justest Reprehensions; whereas St. Peter directs them patiently to suffer even the most undeserved Correction, even when they do well, and suffer for it, I Pet. ii. 20. But the patient suffering of Rebuke is not all that is required of Servants in this Matter; They must also mend the Fault they are rebuked for, and not think they have done enough, when they have (though never so dutifully) given the Master the Hearing.

28. A fourth Duty of a Servant is Diligence. He must constantly attend to all those Things which are the Duties of his Place, and not give himself to Idleness and Sloth, nor yet to Company-keeping, Gaming or any other disorderly Course, which may take him off from his Master’s Business. All these are necessary Duties of a Servant, which they are carefully and conscionably to perform, not so much to escape the Master’s Anger, as God’s, who will cer- 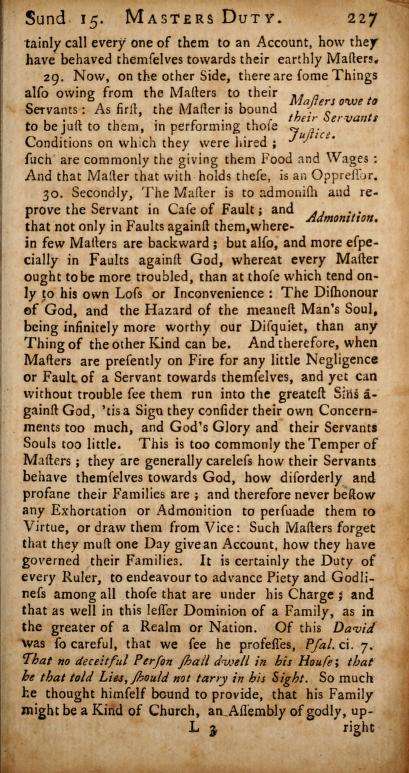 tainly call every one of them to an Account, how they have behaved themselves towards their earthly Masters.

29. Now, on the other Side, there are some Things also owing from the Masters to their Servants: As first, the Master is bound to be just to them, in performing those Conditions on which they were hired; such are commonly the giving them Food and Wages: And that Master that with-holds these, is an Oppressor.

30. Secondly, The Master is to admonish and reprove the Servant in case of Fault; and that not only in Faults against them, wherein few Masters are backward; but also, and more especially in Faults against God, whereat every Master ought to be more troubled, than at those which tend only to his own Loss or Inconvenience: The Dishonour of God, and the Hazard of the meanest Man’s Soul, being infinitely more worthy our Disquiet, than any Thing of the other Kind can be. And therefore, when Masters are presently on Fire for any little Negligence or Fault of a Servant towards themselves, and yet can without trouble see them run into the greatest Sins against God, ’tis a Sign they consider their own Concernments too much, and God’s Glory and their Servants Souls too little. This is too commonly the Temper of Masters; they are generally careless how their Servants behave themselves towards God, how disorderly and profane their Families are; and therefore never bestow any Exhortation or Admonition to persuade them to Virtue, or draw them from Vice: Such Masters forget that they must one Day give an Account, how they have governed their Families. It is certainly the Duty of every Ruler, to endeavour to advance Piety and Godliness among all those that are under his Charge; and that as well in this lesser Dominion of a Family, as in the greater of a Realm or Nation. Of this David was so careful, that we see he professes, Psal. ci. 7. That no deceitful Person shall dwell in his House; that he that told Lies, should not tarry in his Sight. So much he thought himself bound to provide, that his Family might be a Kind of Church, an Assembly of godly, up- 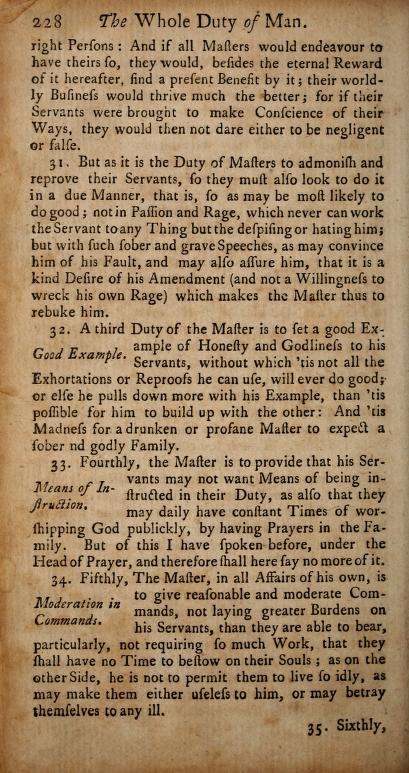 right Persons: And if all Masters would endeavour to have theirs so, they would, besides the eternal Reward of it hereafter, find a present Benefit by it; their worldly Business would thrive much the better; for if their Servants were brought to make Conscience of their Ways, they would then not dare either to be negligent or false.

31. But as it is the Duty of Masters to admonish and reprove their Servants, so they must also look to do it in a due Manner, that is, so as may be most likely to do good; not in Passion and Rage, which can never work the Servant to any Thing but the despising or hating him; but with such sober and grave Speeches, as may convince him of his Fault, and may also assure him, that it is a kind Desire of his Amendment (and not a Willingness to wreck his own Rage) which makes the Master thus to rebuke him.

32. A third Duty of the Master is to set good Example of Honesty and Godliness to his Servants, without which ’tis not all the Exhortations or Reproofs he can use, will ever do good; or else he pulls down more with his Example, than ’tis possible for him to build up with the other: And ’tis Madness for a drunken or profane Master to expect a sober nd godly Family.

33. Fourthly, The Master is to provide that his Servants may not want Means of being instructed in their Duty, as also that they may daily have constant Times of worshipping God publickly, by having Prayers in the Family. But of this I have spoken before, under the Head of Prayer, and therefore shall here say no more of it.

34. Fifthly, The Master, in all Affairs of his own, is to give reasonable and moderate Commands, not laying greater Burdens on his Servants, than they are able to bear, particularly, not requiring so much Work, that they shall have no Time to bestow on their Souls; as on the other Side, he is not to permit them to live so idly, as may make them either useless to him, or may betray themselves to any ill. 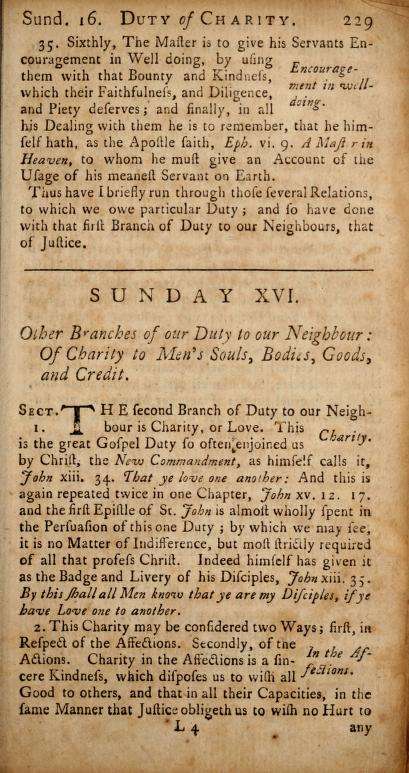 35. Sixthly, The Master is to give his Servants Encouragement in Well doing, by using them with that Bounty and Kindness, which their Faithfulness, and Diligence, and Piety deserves; and finally, in all his Dealing with them he is to remember, that he himself hath, as the Apostle saith, Ephes. vi. 9. A Mast’r in Heaven, to whom he must give an Account of the Usage of his meanest Servant on Earth.

Thus have I briefly run through those several Relations, to which we owe particular Duty; and so have done with that first Branch of Duty to our Neighbours, that of Justice.