Skip to content
Author: Colored State ConventionTranscription Source: Proceedings of the Convention of the Colored People of VA., Held in the City of Alexandria (Alexandria: Cowing and Gillis, 1865), 16.
FULL TEXT 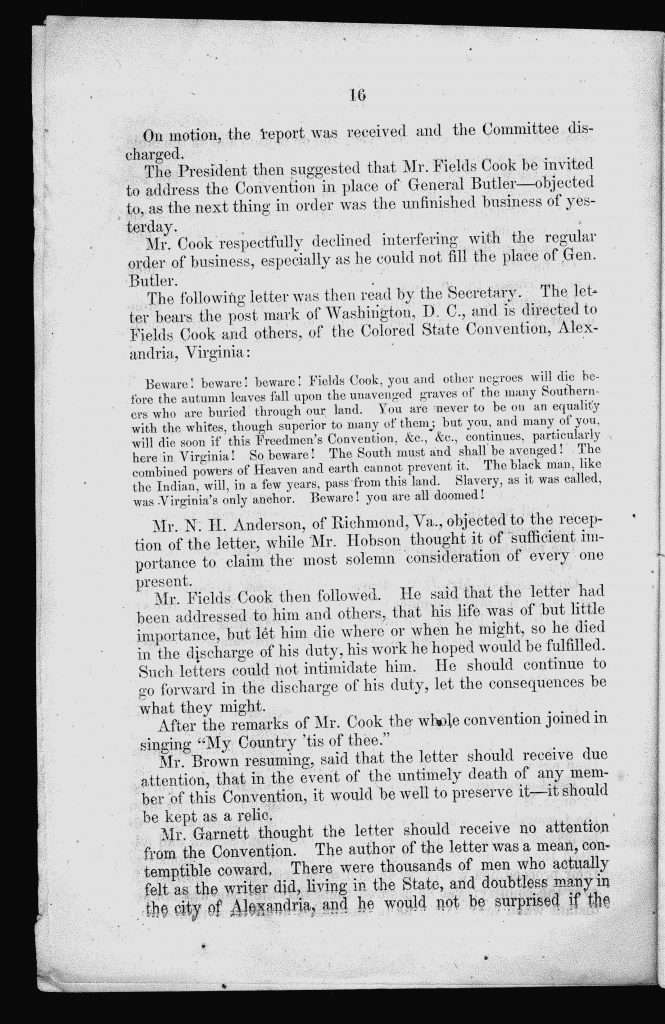 Proceedings of the Convention of the Colored People of VA., Held in the City of Alexandria, Page 16

The following letter was then read by the Secretary. The letter bears the post mark of Washington, D. C., and is directed to Fields Cook and others, of the Colored State Convention, Alexandria, Virginia:

Beware! beware! beware! Fields Cook, you and other negroes will die before the autumn leaves fall upon the unavenged graves of the many Southerners who are buried through our land. You are never to be on an equality with the whites, though superior to many of them; but you, and many of you, will die soon if this Freedmen’s Convention, &c., &c., continues, particularly here in Virginia! So beware! The South must and shall be avenged! The combined powers of Heaven and earth cannot prevent it. The black man, like the Indian, will, in a few years, pass from this land. Slavery, as it was called, was Virginia’s only anchor. Beware! you all are doomed!

Mr. N. H. Anderson, of Richmond, Va., objected to the reception of the letter, while Mr. Hobson thought it of sufficient importance to claim the most solemn consideration of every one present.

Mr. Fields Cook then followed. He said that the letter had been addressed to him and others, that his life was of but little importance, but let him die where or when he might, so he died in the discharge of his duty, his work he hoped would be fulfilled. Such letters could not intimidate him. He should continue to go forward in the discharge of his duty, let the consequences be what they might.

After the remarks of Mr. Cook the whole convention joined in singing “My Country ’tis of thee.”

“The Appeal” from the Proceedings of the Convention of the Colored People of VA., Held in the City of Alexandria (1865) Remarks by William Williams (August 11, 1865)