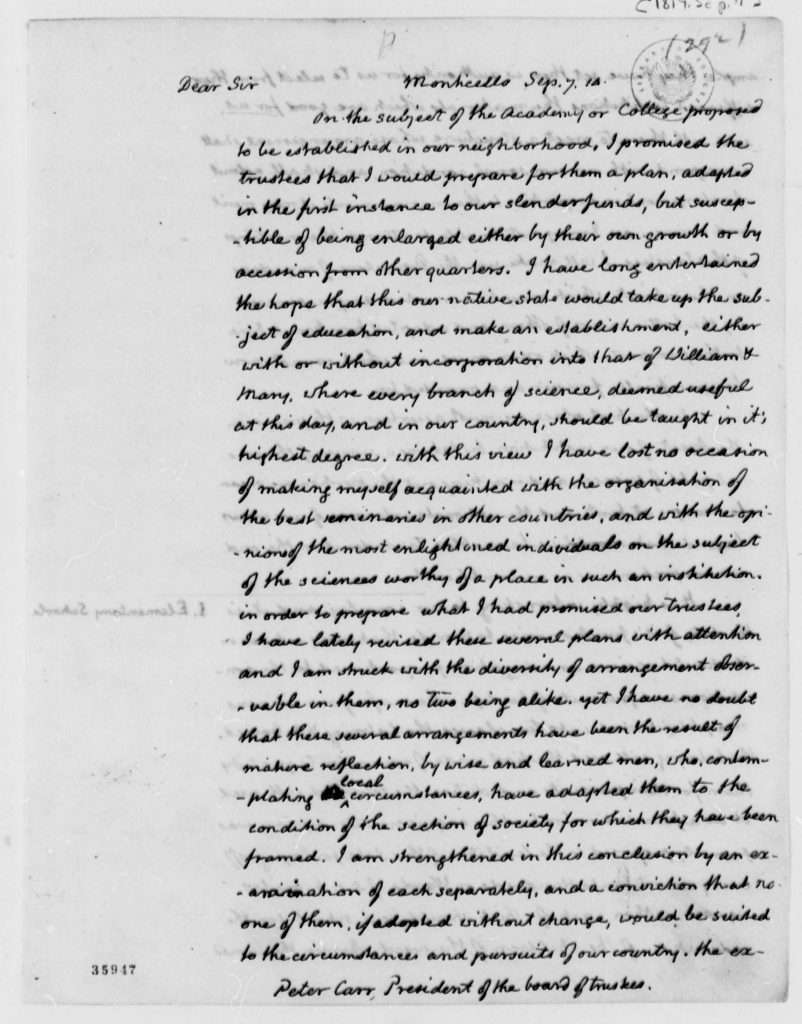 On the subject of the Academy or College proposed to be established in our neighborhood I promised the trustees that I would prepare for them a plan adapted in the first instance to our slender funds, but succeptible of being enlarged either by their own growth or by accession from other quarters. I have long entertained the hope that this our native state would take up the subject of education, and make an establishment, either with or without incorporation into that of William & Mary, where every branch of science, deemed useful at this day, and in our country, should be taught in it’s highest degree. with this view I have lost no occasion of making myself acquainted with the organisation of the best seminaries in other countries, and with the opinions of the most enlightened individuals on the subject of the sciences worthy of a place in such an institution. in order to prepare what I had promised our trustees, I have lately revised these several plans with attention and I am struck with the diversity of arrangement observable in them, no two being alike. yet I have no doubt that these several arrangements have been the result of mature reflection by wise and learned men who, contemplating local circumstances, have adapted them to the condition of the section of society for which they have been framed. I am strengthened in this conclusion by an examination of each separately, and a conviction that no one of them, if adopted without change, would be suited to the circumstances and pursuits of our country. the ex- 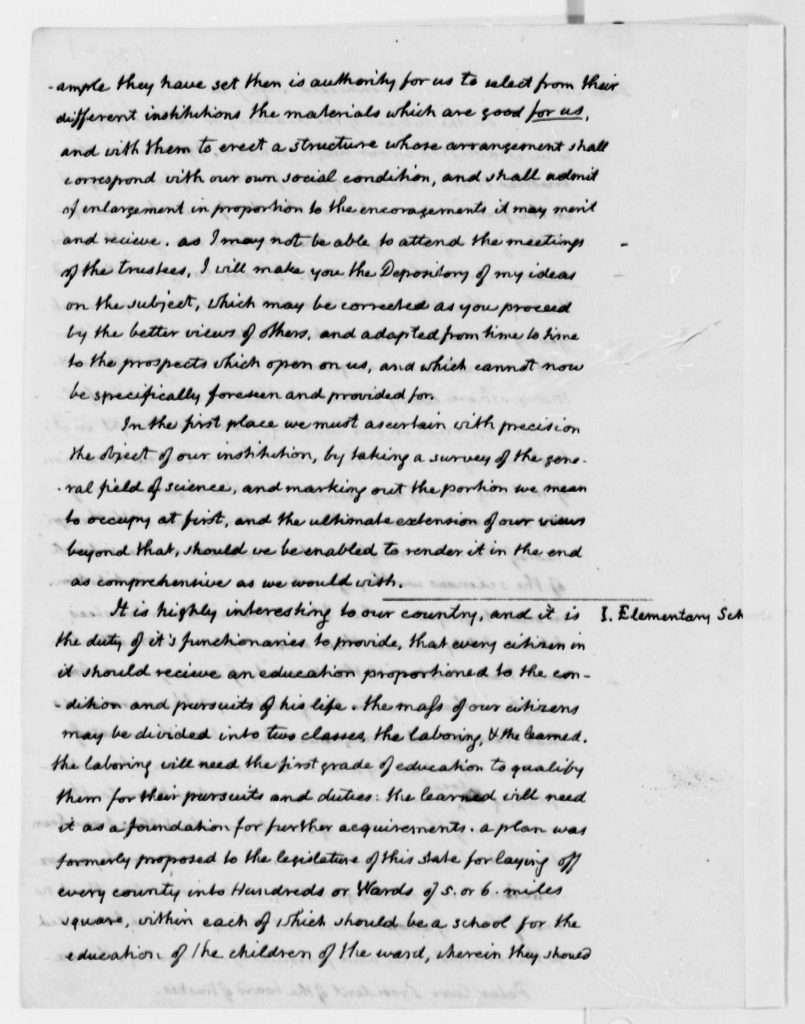 ample they have set then, is authority for us to select from their different institutions the materials which are good for us, and with them to erect a structure whose arrangement shall correspond with our own social condition, and shall admit of enlargement in proportion to the encoragements it may merit and recieve. as I may not be able to attend the meetings of the Trustees, I will make you the Depository of my ideas on the subject, which may be corrected as you proceed by the better views of others, and adapted from time to time to the prospects which open on us, and which cannot now be specifically foreseen and provided for.

In the first place we must ascertain with precision the object of our institution, by taking a survey of the general field of science, and marking out the portion we mean to occupy at first, and the ultimate extension of our views beyond that, should we be enabled to render it in the end as comprehensive as we would wish.

It is highly interesting to our country, and it is the duty of it’s functionaries to provide, that every citizen in it should recieve an education proportioned to the condition and pursuits of his life. the mass of our citizens may be divided into two classes, the laboring & the learned. the laboring will need the first grade of education to qualify them for their pursuits and duties: the learned will need it as a foundation for further acquirements. a plan was formerly proposed to the legislature of this state for laying off every county into Hundreds or Wards of 5. or 6. miles square, within each of which should be a school for the education of the children of the ward, wherein they should 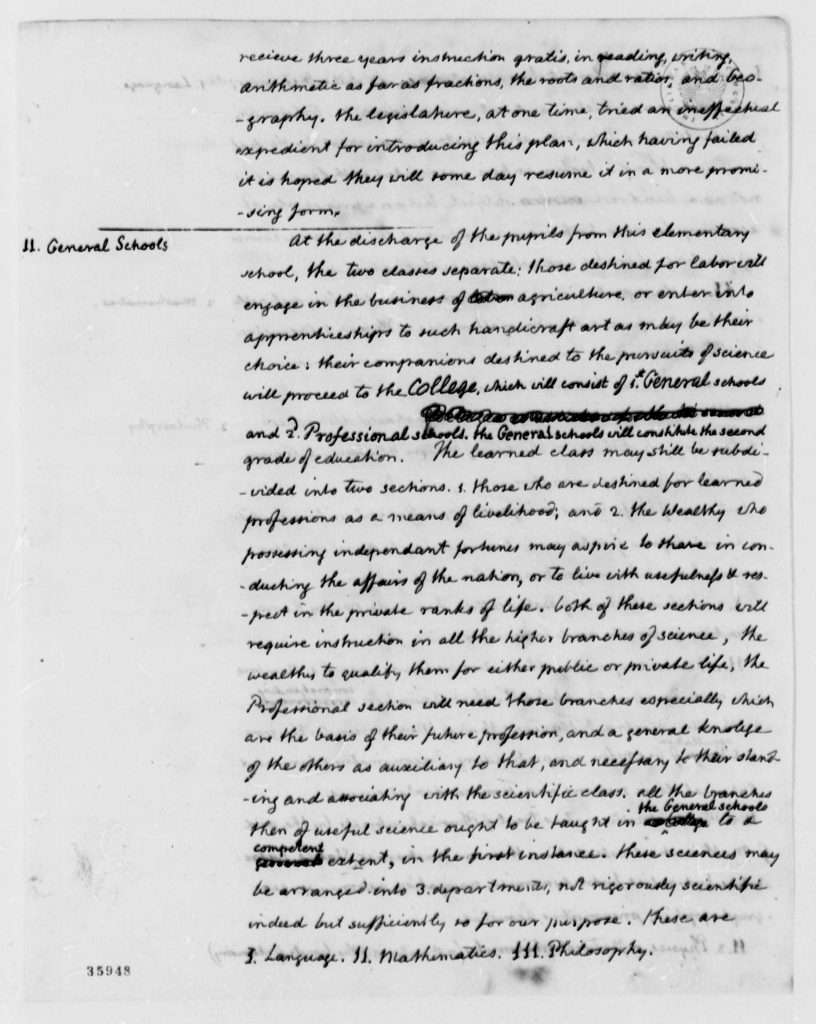 recieve three years instruction gratis, in reading, writing, Arithmetic as far as fractions, the roots and ratios, and Geography. the legislature, at one time, tried an ineffectual expedient for introducing this plan, which having failed it is hoped they will some day resume it in a more promising form.

At the discharge of the pupils from this elementary school, the two classes separate: those destined for labor will engage in the business of agriculture, or enter into apprenticeships to such handicraft art as may be their choice: their companions destined to the pursuits of science will proceed to the College, which will consist of 1st. General schools, and 2d. Professional schools.

The General schools will constitute the second grade of education. The learned class may still be subdivided into two sections. 1. those who are destined for learned professions as a means of livelihood; and 2. the Wealthy, who possessing independant fortunes may aspire to share in conducting the affairs of the nation, or to live with usefulness & respect in the private ranks of life. both of these sections will require instruction in all the higher branches of science, the wealthy to qualify them for either public or private life, the Professional section will need those branches especially which are the basis of their future profession, and a general knolege of the others as auxiliary to that, and necessary to their standing and associating with the scientific class. all the branches then of useful science ought to be taught in a College to a general extent, in the first instance. these sciences may be arranged into 3. departments, not rigorously scientific indeed but sufficiently so for our purpose. these are I. Language. II. Mathematics. III. Philosophy. 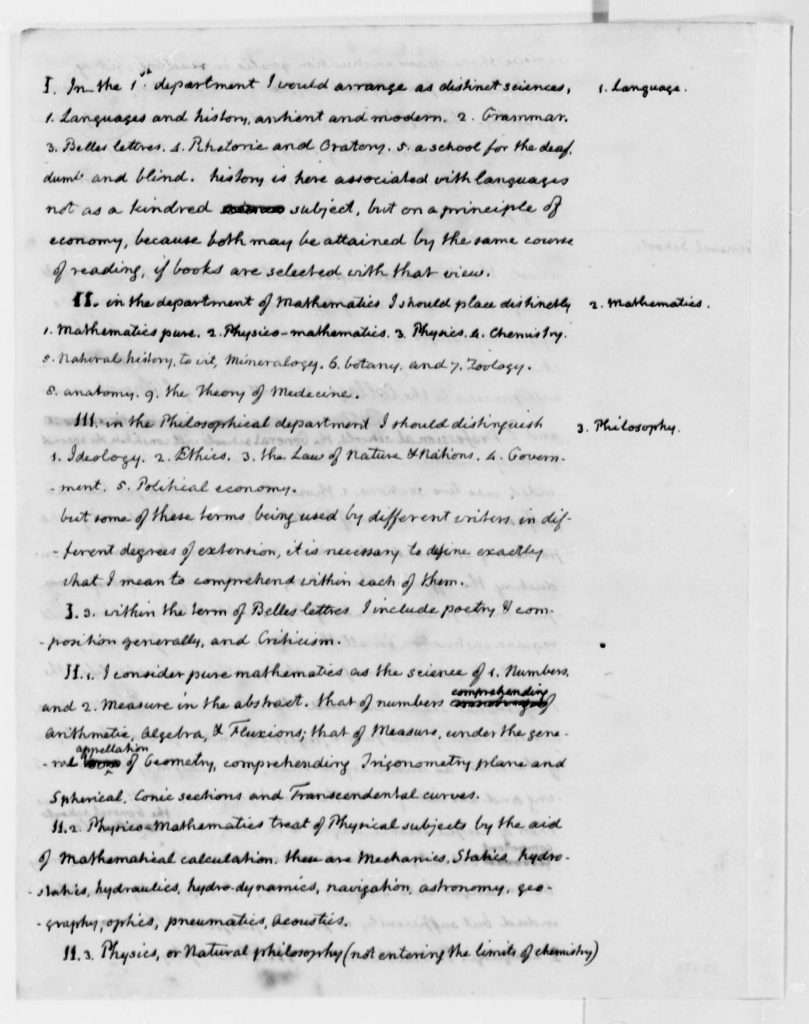 I. In the 1st. department I would arrange as distinct sciences, 1. Languages and history, antient and modern. 2. Grammar. 3. Belles lettres. 4. Rhetoric and Oratory. 5. a school for the deaf, dumb and blind. history is here associated with languages not as a kindred subject, but on a principle of economy, because both may be attained by the same course of reading, if books are selected with that view.

II. in the department of Mathematics I should place distinctly 1. Mathematics pure. 2. Physico-mathematics. 3. Physics. 4. Chemistry. 5. Natural history, to wit, Mineralogy. 6. botany. and 7. Zoology. 8. anatomy. 9. the Theory of Medecine.

III. in the Philosophical department I should distinguish 1. Ideology. 2. Ethics. 3. the Law of Nature & Nations. 4. Government. 5. Political economy.

but some of these terms being used by different writers in different degrees of extension, it is necessary to define exactly what I mean to comprehend within each of them.

I. 3. within the term of Belles lettres I include poetry & composition generally, and Criticism.

II. 1. I consider pure mathematics as the science of 1. Numbers. and 2. Measure in the abstract. that of numbers consisting of Arithmetic, Algebra, & Fluxions; that of Measure, under the general appellation of Geometry, comprehending Trigonometry plan and Spherical Conic sections and Transcendental curves.

II. 3. Physics, or Natural philosophy (not entering the limits of chemistry) 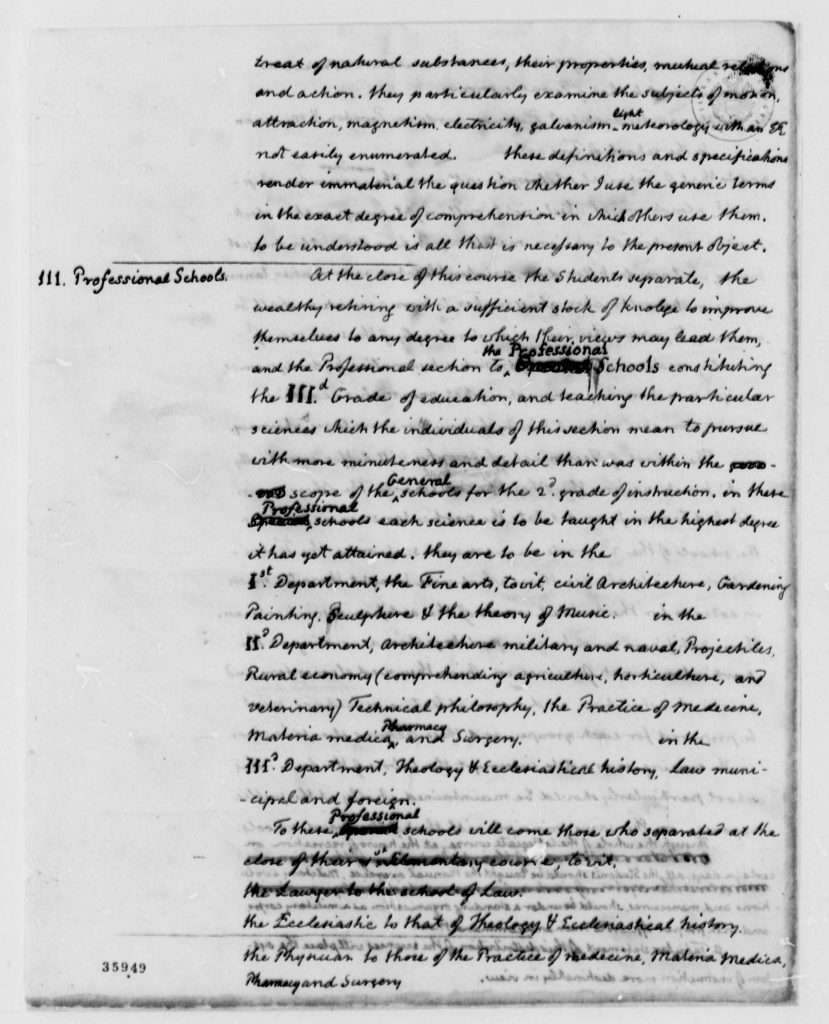 treat of natural substances, their properties, mutual relations, and action. they particularly examine the subjects of motion attraction, magnetism, electricity, galvanis, light meteorology with an Etc. not easily enumerated.

these definitions and specifications render immaterial the question whether I use the generic terms in the exact degree of comprehension in which others use them. to be understood is all that is necessary to the present object.

At the close of this course the Students separate, the wealthy retiring with a sufficient stock of knolege to improve themselves to any degree to which their views may lead them, and the Professional section to the Professional Schools constituting the IIId. Grade of education, and teaching the particular sciences which the individuals of this section mean to pursue, with more minuteness and detail than was within the scope of the General schools for the 2d. grade of instruction. in these Professional schools each science is to be taught in the highest degree it has yet attained. they are to be in the

To these Professional schools will come those who separated at the close of their 1st. Elementary course, to wit.

the Lawyer to the school of Law.

the Physician to those of the Practice of medecine, Materia Medica, Pharmacy and Surgery 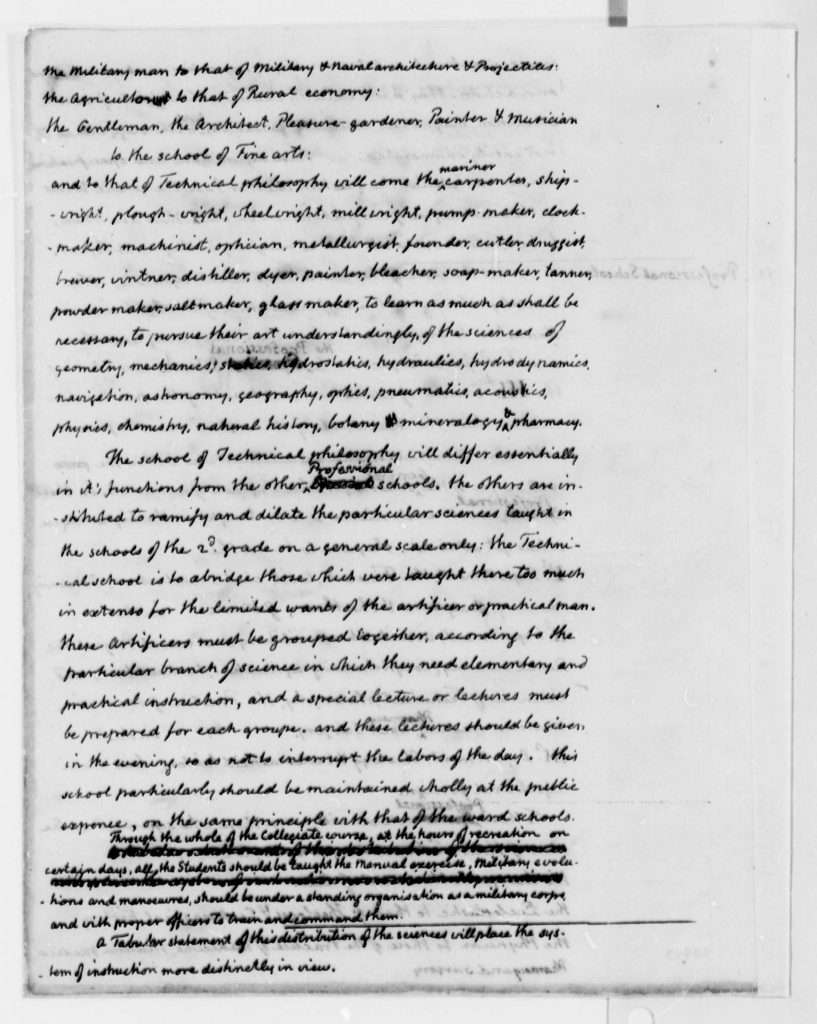 the Military man to that of Military & Naval architecture & projectiles:

the Agricultor to that of Rural economy:

the Gentleman, the Architect, Pleasure-gardener, Painter & Musician to the school of Fine arts:

The school of Technical philosophy will differ essentially in it’s functions from the other Professional schools. the other are instituted to ramify and dilate the particular sciences taught in the schools of the 2d. grade on a general scale only: the Technical school is to abridge those which were taught there too much in extenso for the limited wants of the artificer or practical man. these Artificers must be grouped together, according to the particular branch of science in which they need elementary and practical instruction, and a special lecture or lectures must be prepared for each groupe. and these lectures should be given in the evening, so as not to interrupt the labors of the day. this school particularly should be maintained wholly at the public expence, on the same principles with that of the ward schools.

Through the whole of the Collegiate course, at the hours of recreation on certain days, all the Students should be taught the Manual exercise, Military evolutions and manoeuvres, should be under a standing organisation as a military corps, and with proper officers to train and command them.

A Tabular statement of this distribution of the sciences will place the system of instruction more particularly in view. 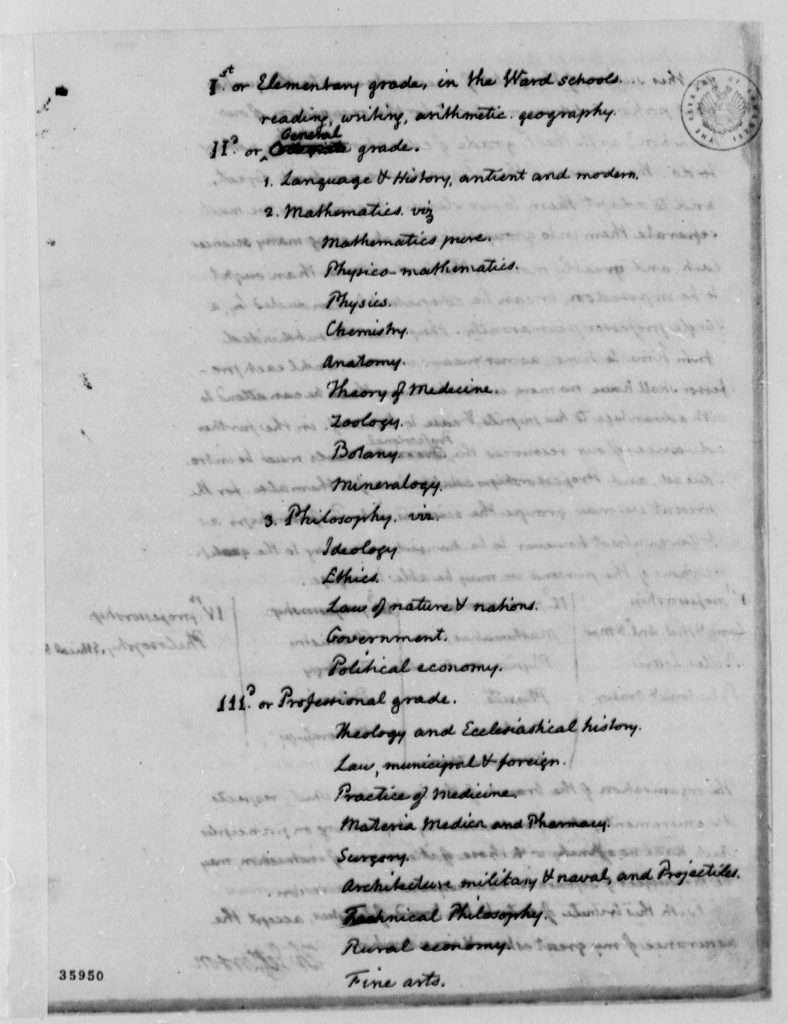 Ist. or Elementary grade, in the Ward schools. 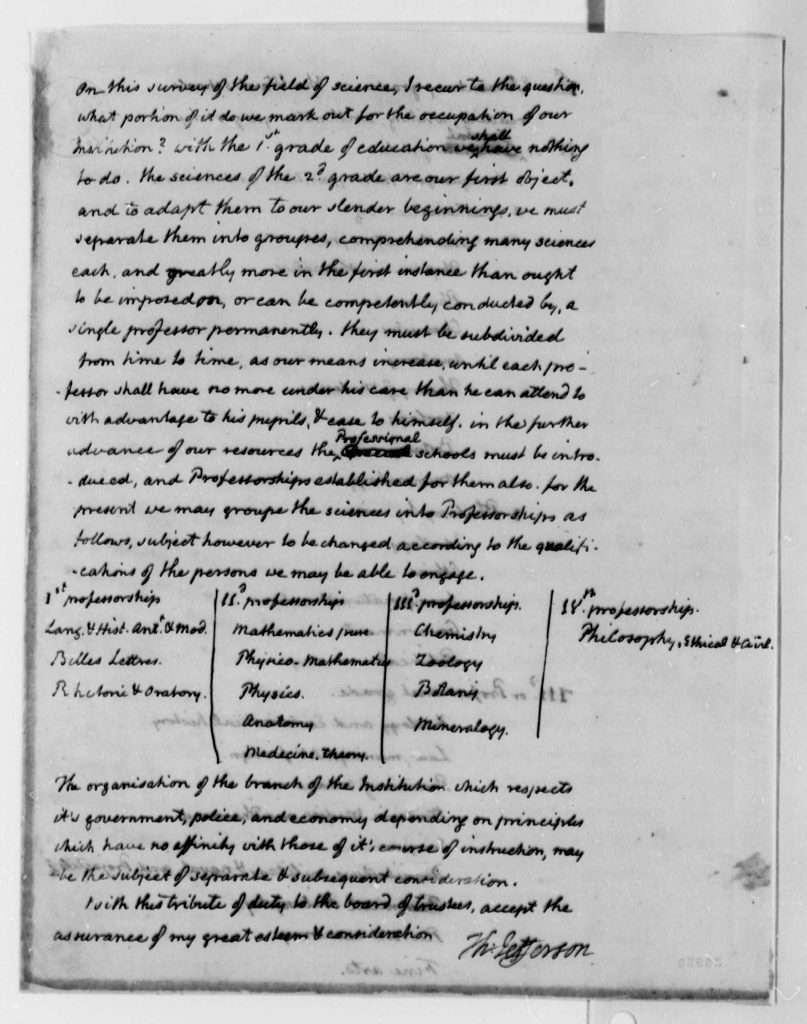 On this survey of the field of science, I recur to the question, what portion of it we mark out for the occupation of our Institution? with the 1st. grade of education we shall have nothing to do. the sciences of the 2d. grade are our first object, and to adapt them to our slender beginnings, we must separate them into groupes, comprehending many sciences each, and greatly more in the first instance than ought to be imposed on, or can be competently conducted by a single professor permanently. they must be subdivided from time to time, as our means increase, until each professor shall have no more under his care than he can attend to with advantage to his pupils & ease to himself. in the further advance of our resources the Professional schools must be introduced, and professorships established for them also. for the present we may groupe the sciences into Professorships as follows, subject however to be changed according to the qualifications of the persons we may be able to engage.

The organisation of the branch of the Institution which respects it’s government, police, and economy depending on principles which have no affinity with those of it’s course of instruction, may be the subject of separate & subsequent consideration.

With this tribute of duty to the board of trustees, accept the assurance of my great esteem & consideration

RELATED CONTENT
Categories:
Type:
MAP
TIMELINE
September 7, 1814
Thomas Jefferson writes to Peter Carr, outlining his educational philosophy and encouraging Carr to apply it to the establishment of Albemarle Academy, of which Carr is president.
FURTHER READING