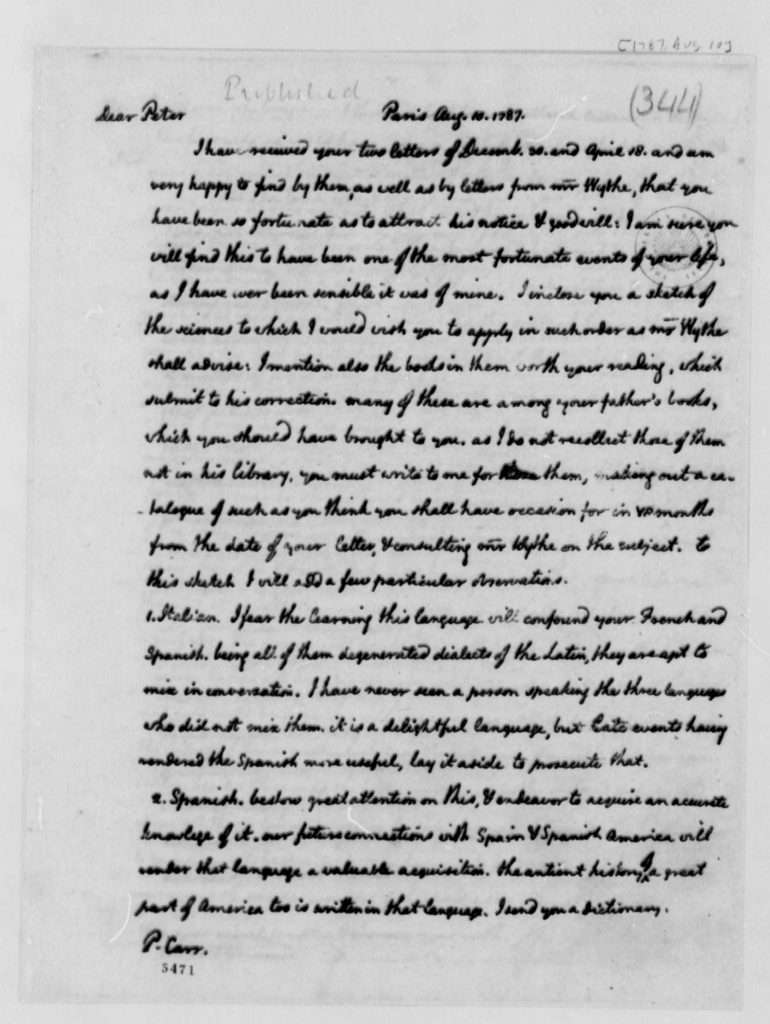 I have received your two letters of Decemb. 30. and April 18. and am very happy to find by them, as well as by letters from Mr. Wythe, that you have been so fortunate as to attract his notice and good will: I am sure you will find this to have been one of the most fortunate events of your life, as I have ever been sensible it was of mine. I inclose you a sketch of the sciences to which I would wish you to apply in such order as Mr. Wythe shall advise: I mention also the books in them worth your reading, which submit to his correction. Many of these are among your father’s books, which you should have brought to you. As I do not recollect those of them not in his library, you must write to me for them, making out a catalogue of such as you think you shall have occasion for in 18 months from the date of your letter, and consulting Mr. Wythe on the subject. To this sketch I will add a few particular observations.

1. Italian. I fear the learning this language will confound your French and Spanish. Being all of them degenerated dialects of the Latin, they are apt to mix in conversation. I have never seen a person speaking the three languages who did not mix them. It is a delightful language, but late events having rendered the Spanish more useful, lay it aside to prosecute that.

2. Spanish. Bestow great attention on this, and endeavor to acquire an accurate knowlege of it. Our future connections with Spain and Spanish America will render that language a valuable acquisition. The antient history of a great part of America too is written in that language. I send you a dictionary. 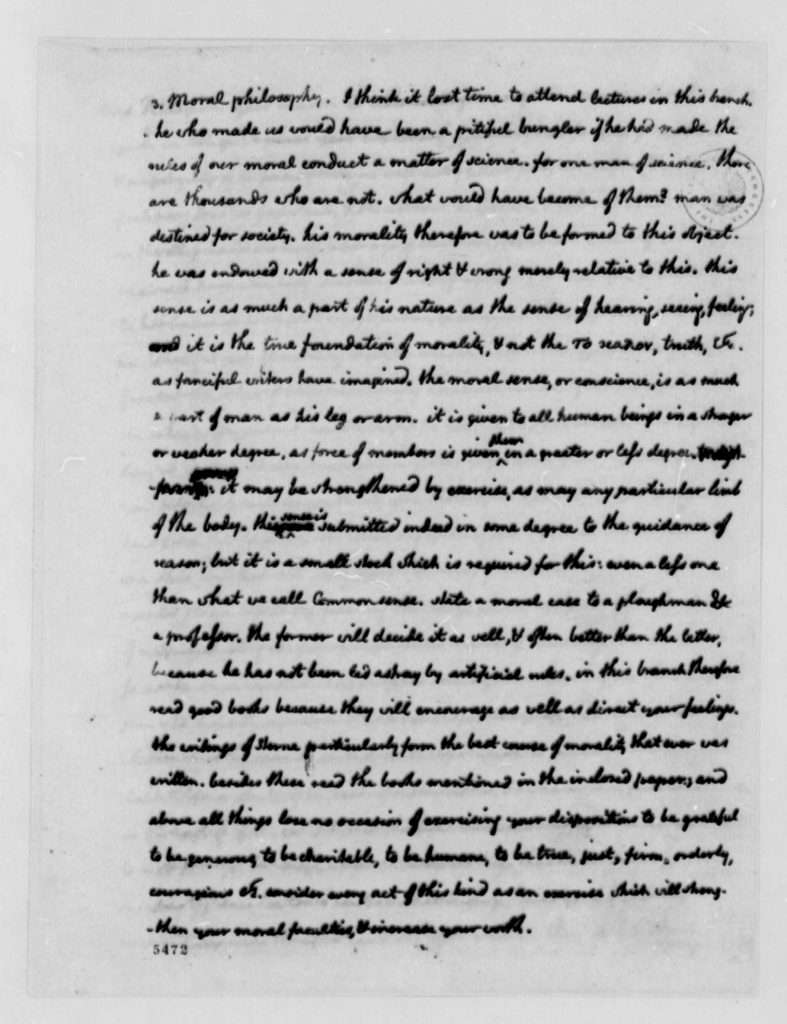 3. Moral philosophy. I think it lost time to attend lectures in this branch. He who made us would have been a pitiful bungler if he had made the rules of our moral conduct a matter of science. For one man of science, there are thousands who are not. What would have become of them? Man was destined for society. His morality therefore was to be formed to this object. He was endowed with a sense of right and wrong merely relative to this. This sense is as much a part of his nature as the sense of hearing, seeing, feeling; it is the true foundation of morality, and not the truth, &c., as fanciful writers have imagined. The moral sense, or conscience, is as much a part of man as his leg or arm. It is given to all human beings in a stronger or weaker degree, as force of members is given them in a greater or less degree. It may be strengthened by exercise, as may any particular limb of the body. This sense is submitted indeed in some degree to the guidance of reason; but it is a small stock which is required for this: even a less one than what we call Common sense. State a moral case to a ploughman and a professor. The former will decide it as well, and often better than the latter, because he has not been led astray by artificial rules. In this branch therefore read good books because they will encourage as well as direct your feelings. The writings of Sterne particularly form the best course of morality that ever was written. Besides these read the books mentioned in the inclosed paper; and above all things lose no occasion of exercising your dispositions to be grateful, to be generous, to be charitable, to be humane, to be true, just, firm, orderly, couragious &c. Consider every act of this kind as an exercise which will strengthen your moral faculties, and increase your worth. 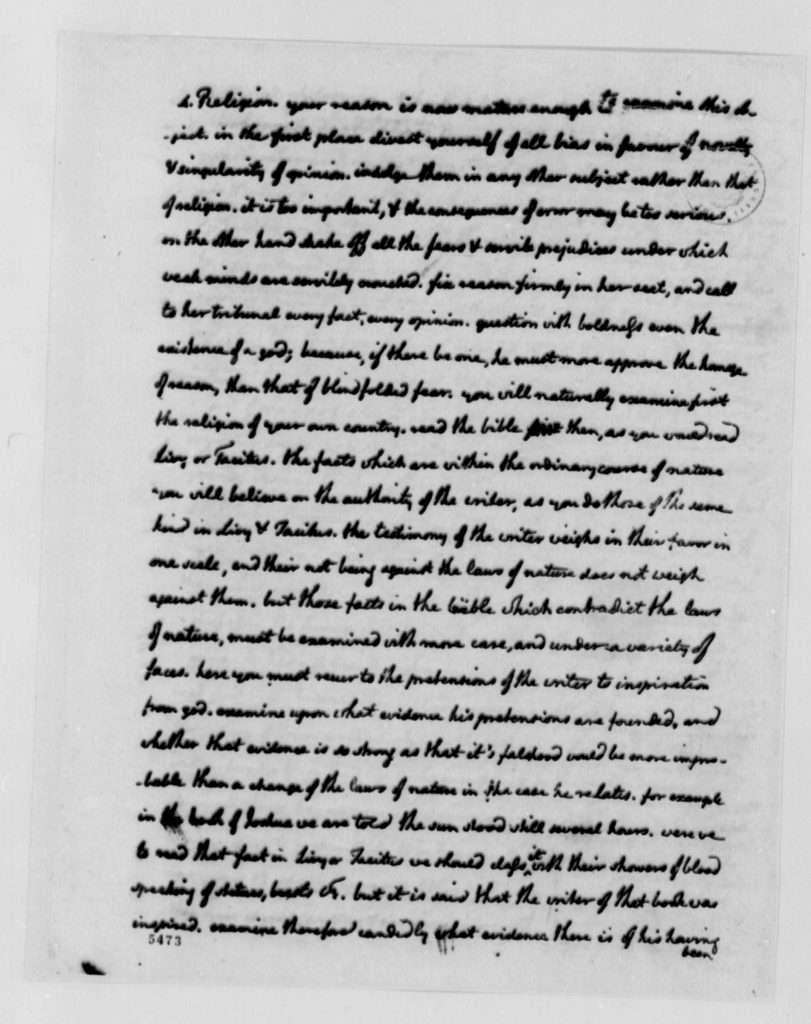 4. Religion. Your reason is now mature enough to receive this object. In the first place divest yourself of all bias in favour of novelty and singularity of opinion. Indulge them in any other subject rather than that of religion. It is too important, and the consequences of error may be too serious. On the other hand shake off all the fears and servile prejudices under which weak minds are servilely crouched. Fix reason firmly in her seat, and call to her tribunal every fact, every opinion. Question with boldness even the existence of a god; because, if there be one, he must more approve the homage of reason, than that of blindfolded fear. You will naturally examine first the religion of your own country. Read the bible then, as you would read Livy or Tacitus. The facts which are within the ordinary course of nature you will believe on the authority of the writer, as you do those of the same kind in Livy and Tacitus. The testimony of the writer weighs in their favor in one scale, and their not being against the laws of nature does not weigh against them. But those facts in the bible which contradict the laws of nature, must be examined with more care, and under a variety of faces. Here you must recur to the pretensions of the writer to inspiration from god. Examine upon what evidence his pretensions are founded, and whether that evidence is so strong as that it’s falshood would be more improbable than a change of the laws of nature in the case he relates For example in the book of Joshua we are told the sun stood still several hours. Were we to read that fact in Livy or Tacitus we should class it with their showers of blood, speaking of statues, beasts &c., but it is said that the writer of that book was inspired. Examine therefore candidly what evidence there is of his having 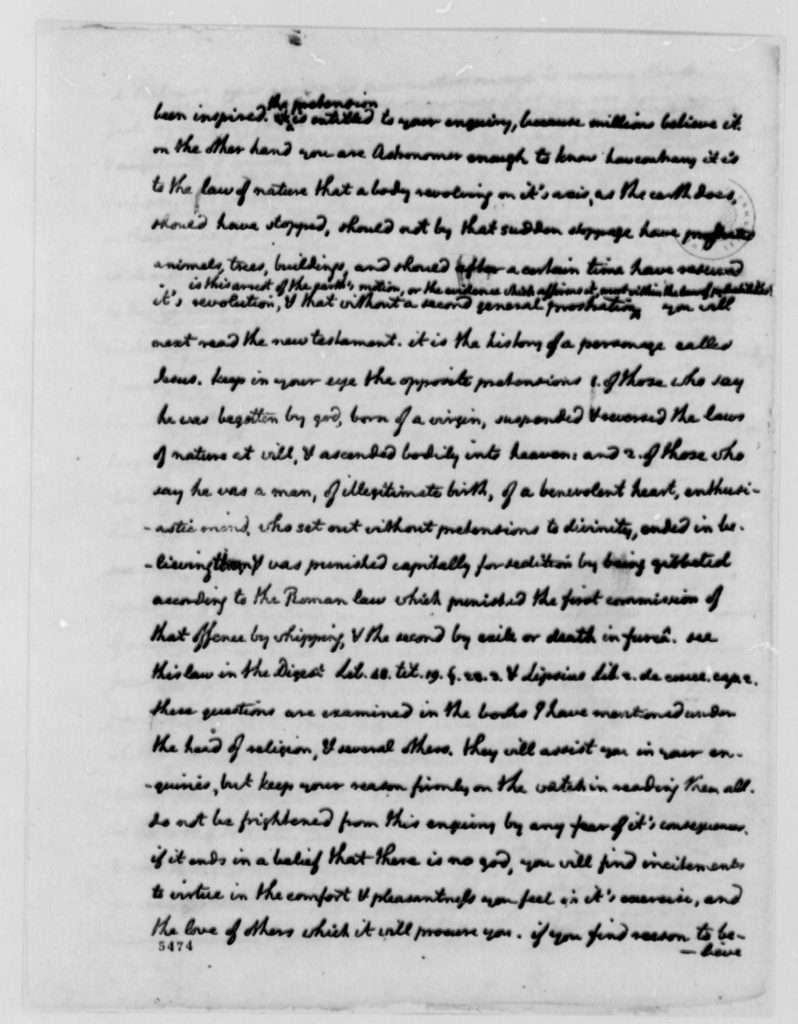 been inspired. The pretension is entitled to your enquiry, because millions believe it. On the other hand you are Astronomer enough to know how contrary it is to the law of nature that a body revolving on it’s axis, as the earth does, should have stopped, should not by that sudden stoppage have prostrated animals, trees, buildings, and should after a certain time have resumed it’s revolution, and that without a second general prostration. Is this arrest of the earth’s motion, or the evidence which affirms it, most within the law of probabilities? You will next read the new testament. It is the history of a personage called Jesus. Keep in your eye the opposite pretensions. 1. Of those who say he was begotten by god, born of a virgin, suspended and reversed the laws of nature at will, and ascended bodily into heaven: and 2. of those who say he was a man, of illegitimate birth, of a benevolent heart, enthusiastic mind, who set out without pretensions to divinity, ended in believing them, and was punished capitally for sedition by being gibbeted according to the Roman law which punished the first commission of that offence by whipping, and the second by exile or death in furcâ. See this law in the Digest Lib. 48. tit. 19 § 28. 3. and Lipsius Lib. 2. de cruce. cap. 2. These questions are examined in the books I have mentioned under the head of religion, and several others. They will assist you in your enquiries, but keep your reason firmly on the watch in reading them all. Do not be frightened from this enquiry by any fear of it’s consequences. If it ends in a belief that there is no god, you will find incitements to virtue in the comfort and pleasantness you feel in it’s exercise, and the love of others which it will procure you. If you find reason to be- 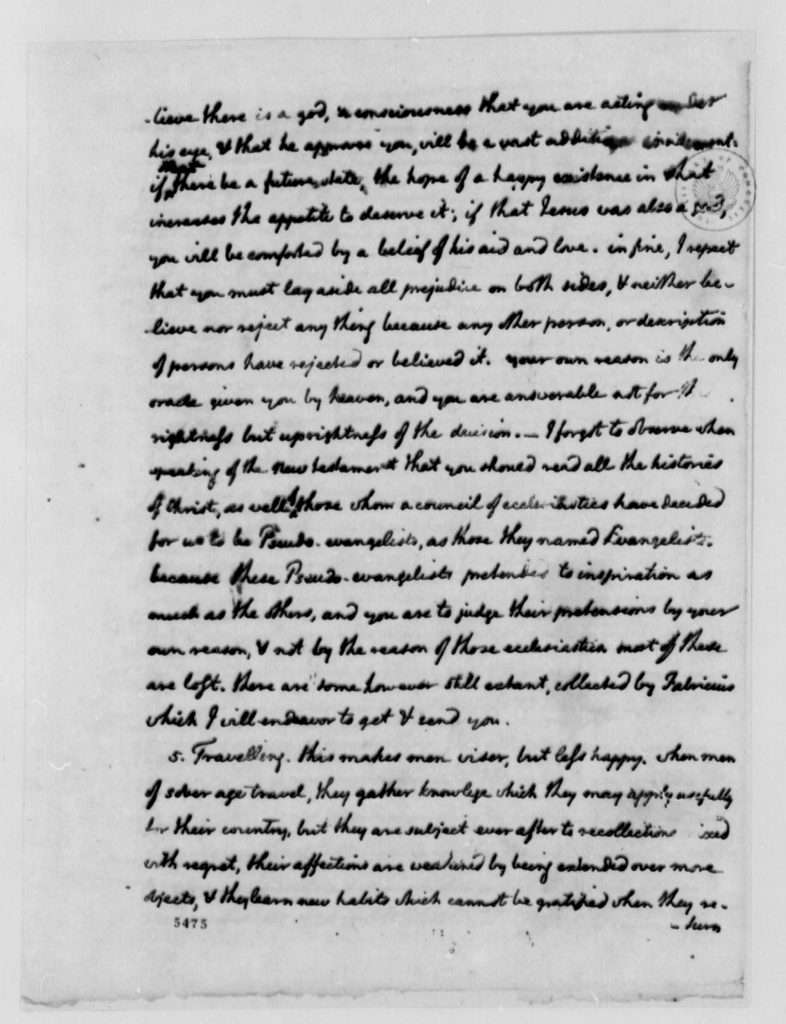 lieve there is a god, a consciousness that you are acting under his eye, and that he approves you, will be a vast additional incitement. If that there be a future state, the hope of a happy existence in that increases the appetite to deserve it; if that Jesus was also a god, you will be comforted by a belief of his aid and love. In fine, I repeat that you must lay aside all prejudice on both sides, and neither believe nor reject any thing because any other person, or description of persons have rejected or believed it. Your own reason is the only oracle given you by heaven, and you are answerable not for the rightness but uprightness of the decision.—I forgot to observe when speaking of the New testament that you should read all the histories of Christ, as well of those whom a council of ecclesiastics have decided for us to be Pseudo-evangelists, as those they named Evangelists, because these Pseudo-evangelists pretended to inspiration as much as the others, and you are to judge their pretensions by your own reason, and not by the reason of those ecclesiastics. Most of these are lost. There are some however still extant, collected by Fabricius which I will endeavor to get and send you.

5. Travelling. This makes men wiser, but less happy. When men of sober age travel, they gather knowlege which they may apply usefully for their country, but they are subject ever after to recollections mixed with regret, their affections are weakened by being extended over more objects, and they learn new habits which cannot be gratified when they re- 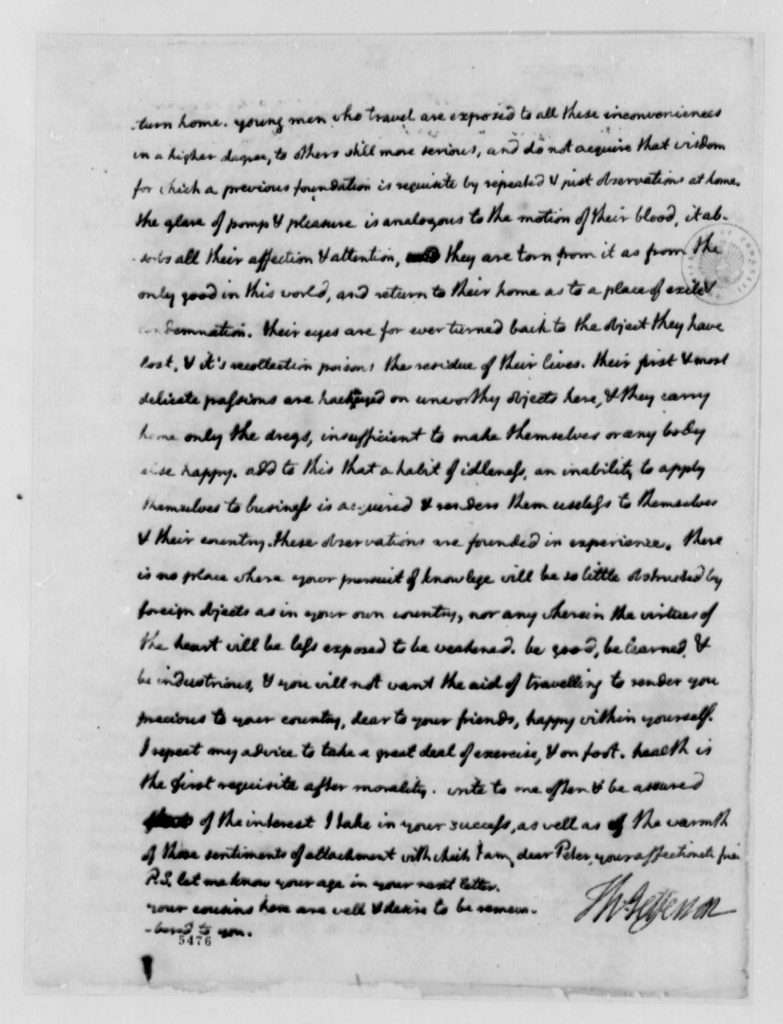 turn home. Young men who travel are exposed to all these inconveniences in a higher degree, to others still more serious, and do not acquire that wisdom for which a previous foundation is requisite by repeated and just observations at home. The glare of pomp and pleasure is analogous to the motion of their blood, it absorbs all their affection and attention, they are torn from it as from the only good in this world, and return to their home as to a place of exile and condemnation. Their eyes are for ever turned back to the object they have lost, and it’s recollection poisons the residue of their lives. Their first and most delicate passions are hackneyed on unworthy objects here, and they carry home only the dregs, insufficient to make themselves or any body else happy. Add to this that a habit of idleness, an inability to apply themselves to business is acquired and renders them useless to themselves and their country. These observations are founded in experience. There is no place where your pursuit of knowlege will be so little obstructed by foreign objects as in your own country, nor any wherein the virtues of the heart will be less exposed to be weakened. Be good, be learned, and be industrious, and you will not want the aid of travelling to render you precious to your country, dear to your friends, happy within yourself. I repeat my advice to take a great deal of exercise, and on foot. Health is the first requisite after morality. Write to me often and be assured of the interest I take in your success, as well as of the warmth of those sentiments of attachment with which I am, dear Peter, your affectionate friend,

P.S. Let me know your age in your next letter. Your cousins here are well and desire to be remembered to you. 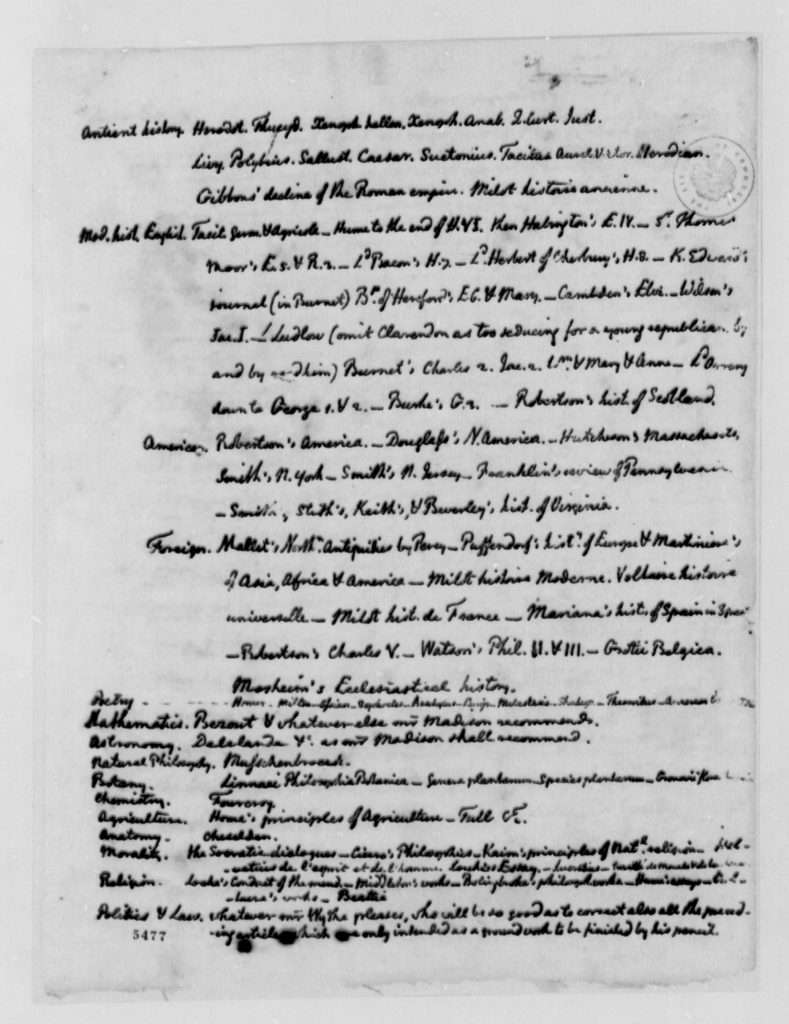 Politics & Law. Whatever Mr. Wythe pleases, who will be so good as to correct also all the preceding articles which are only intended as a ground work to be finished by his pencil.