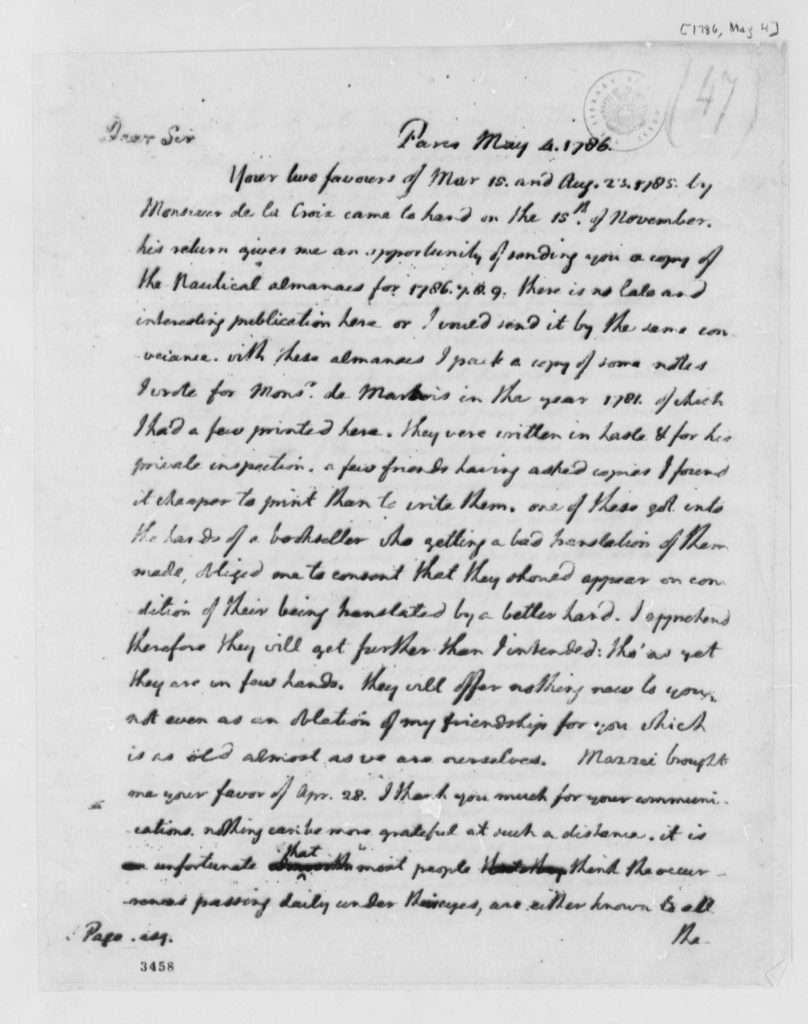 Your two favours of Mar. 15, and Aug. 23. 1785. by Monsieur de la Croix came to hand on the 15th. of November. His return gives me an opportunity of sending you a copy of the Nautical almanacs for 1786. 7. 8. 9. There is no late and interesting publication here or I would send it by the same conveiance. With these almanacs I pack a copy of some notes I wrote for Monsr. de Marbois in the year 1781. of which I had a few printed here. They were written in haste and for his private inspection. A few friends having asked copies I found it cheaper to print than to write them. One of these got into the hands of a bookseller who getting a bad translation of them made, obliged me to consent that they should appear on condition of their being translated by a better hand. I apprehend therefore they will get further than I intended; tho’ as yet they are in few hands. They will offer nothing new to you, not even as an oblation of my friendship for you which is as old almost as we are ourselves. Mazzei brought me your favor of Apr. 28. I thank you much for your communications. Nothing can be more grateful at such a distance. It is unfortunate that most people think the occurrences passing daily under their eyes, are either known to all 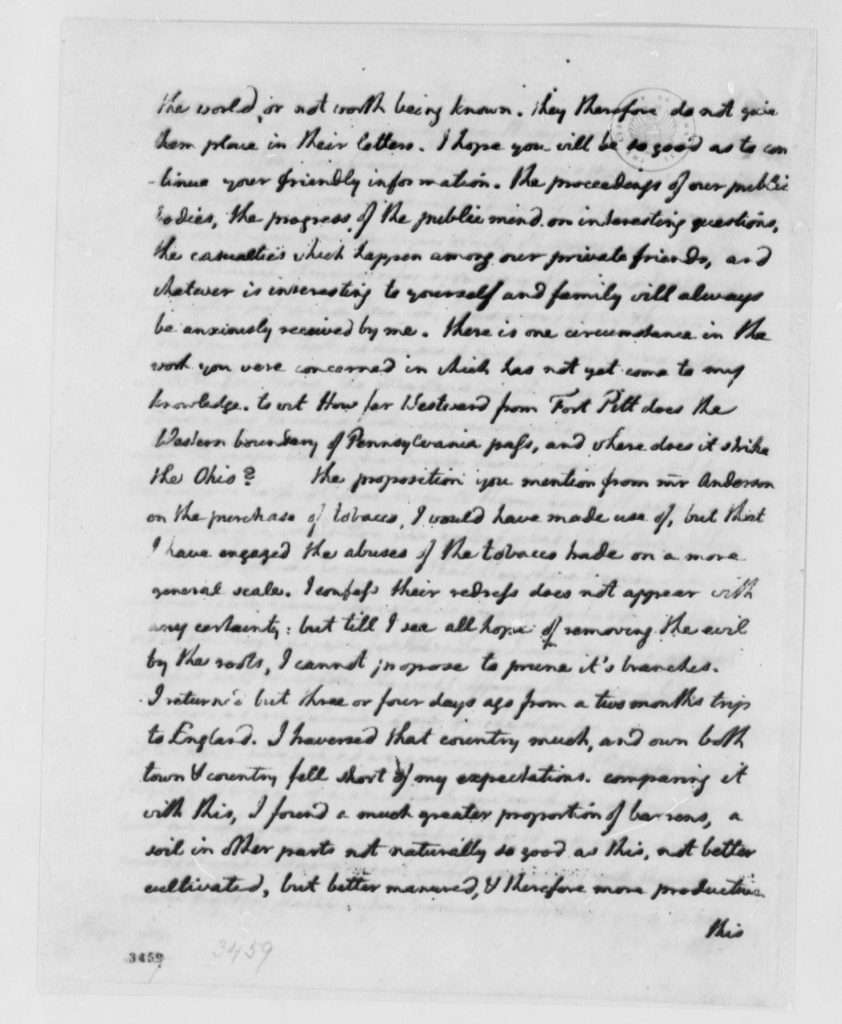 the world, or not worth being known. They therefore do not give them place in their letters. I hope you will be so good as to continue your friendly information. The proceedings of our public bodies, the progress of the public mind on interesting questions, the casualties which happen among our private friends, and whatever is interesting to yourself and family will always be anxiously received by me. There is one circumstance in the work you were concerned in which has not yet come to my knowledge. To wit How far Westward from Fort Pitt does the Western boundary of Pennsylvania pass, and where does it strike the Ohio? The proposition you mention from Mr. Anderson on the purchase of tobacco, I would have made use of, but that I have engaged the abuses of the tobacco trade on a more general scale. I confess their redress does not appear with any certainty; but till I see all hope of removing the evil by the roots, I cannot propose to prune it’s branches. I returned but three or four days ago from a two months trip to England. I traversed that country much, and own both town and country fell short of my expectations. Comparing it with this, I found a much greater proportion of barrens, a soil in other parts not naturally so good as this, not better cultivated, but better manured, and therefore more productive. 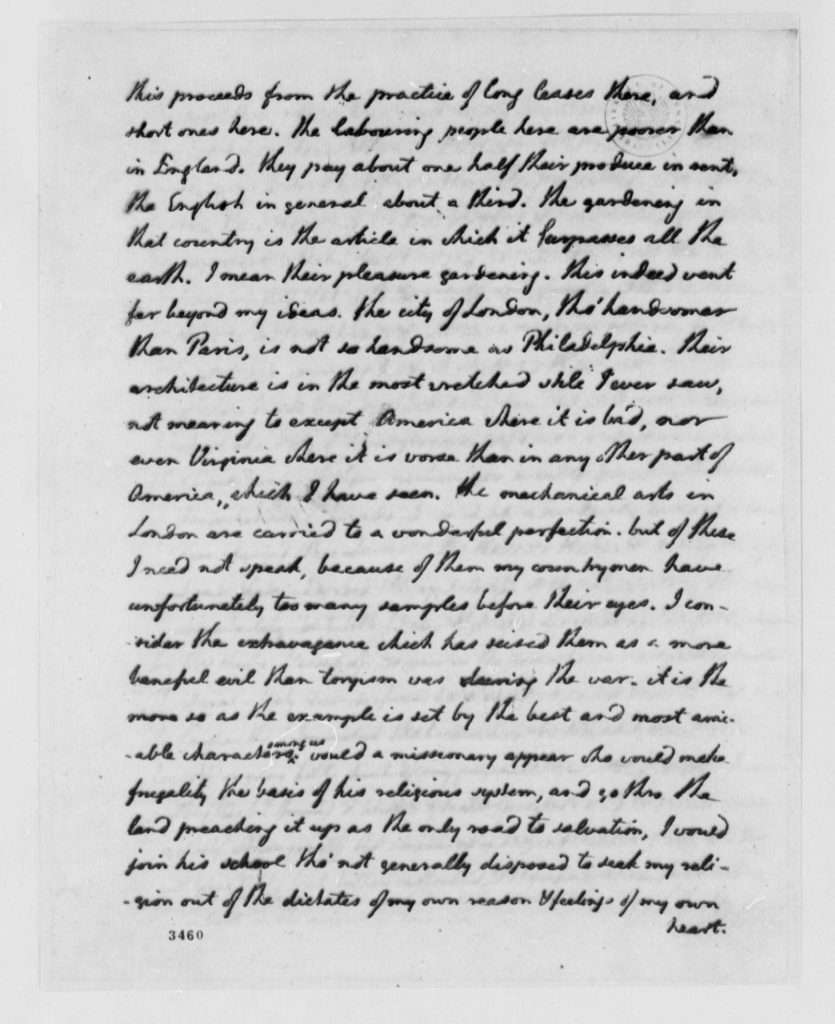 This proceeds from the practice of long leases there, and short ones here. The labouring people here are poorer than in England. They pay about one half their produce in rent, the English in general about a third. The gardening in that country is the article in which it surpasses all the earth. I mean their pleasure gardening. This indeed went far beyond my ideas. The city of London, tho’ handsomer than Paris, is not so handsome as Philadelphia. Their architecture is in the most wretched stile I ever saw, not meaning to except America where it is bad, nor even Virginia where it is worse than in any other part of America, which I have seen. The mechanical arts in London are carried to a wonderful perfection. But of these I need not speak, because of them my countrymen have unfortunately too many samples before their eyes. I consider the extravagance which has seized them as a more baneful evil than toryism was during the war. It is the more so as the example is set by the best and most amiable characters among us. Would a missionary appear who would make frugality the basis of his religious system, and go thro the land preaching it up as the only road to salvation, I would join his school tho’ not generally disposed to seek my religion out of the dictates of my own reason and feelings of my own heart. 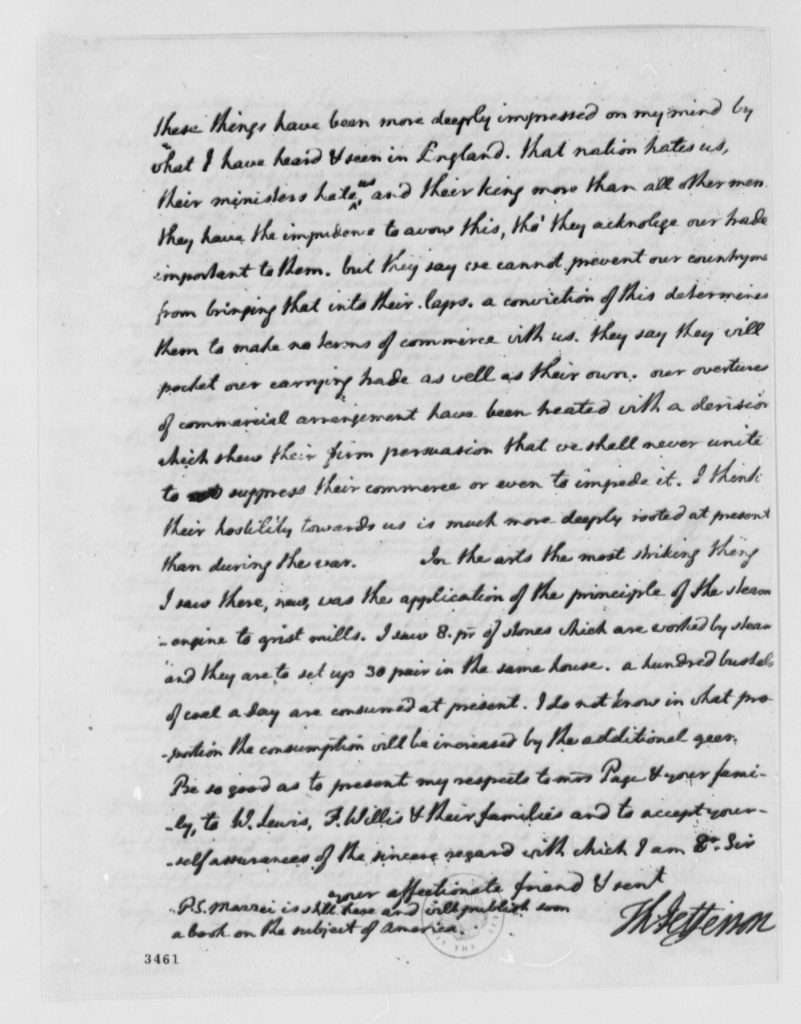 These things have been more deeply impressed on my mind by what I have heard and seen in England. That nation hates us, their ministers hate us, and their king more than all other men. They have the impudence to avow this, tho’ they acknolege our trade important to them. But they say we cannot prevent our countrymen from bringing that into their laps. A conviction of this determines them to make no terms of commerce with us. They say they will pocket our carrying trade as well as their own. Our overtures of commercial arrangement have been treated with a derision which shew their firm persuasion that we shall never unite to suppress their commerce or even to impede it. I think their hostility towards us is much more deeply rooted at present than during the war. In the arts the most striking thing I saw there, new, was the application of the principle of the steam-engine to grist mills. I saw 8. pr. of stones which are worked by steam and they are to set up 30 pair in the same house. A hundred bushels of coal a day are consumed at present. I do not know in what proportion the consumption will be increased by the additional geer. Be so good as to present my respects to Mrs. Page and your family, to W. Lewis, F. Willis and their families and to accept yourself assurances of the sincere regard with which I am Dr. Sir your affectionate friend & servt,

P.S. Mazzei is still here and will publish soon a book on the subject of America.