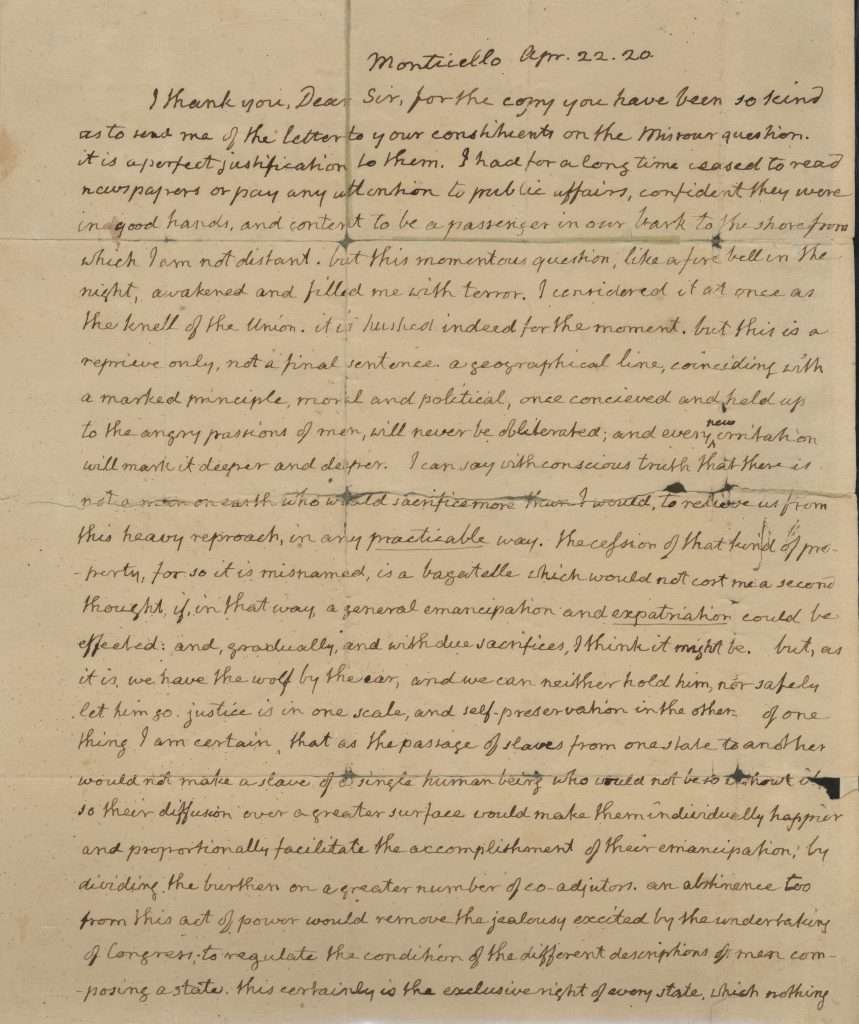 I thank you, Dear Sir, for the copy you have been so kind as to send me of the letter to your constituents on the Missouri question. it is a perfect justification to them. I had for a long time ceased to read newspapers or pay any attention to public affairs, confident they were in good hands, and content to be a passenger in our bark to the shore from which I am not distant. but this mementous question, like a fire bell in the night, awakened and filled me with terror. I considered it at once as the knell of the Union. it is hushed indeed for the moment. but this is a reprieve only, not a final sentence. a geographical line, coinciding with a marked principle, moral and political, once concieved and held up to the angry passions of men, will never be obliterated; and every , Start insertion,new, End, irritation will mark it deeper and deeper. I can say with conscious truth that there is not a man on earth who would sacrifice more than I would, to relieve us from this heavy reproach, in any practicable way. the cession of that kind of property, for it is so misnamed, is a bagatelle which would not cost me a second thought, if, in that way, a general emancipation and expatriation could be effected: and, gradually, and with due sacrifices, I think it might be. but, as it is, we have the wolf by the ear, and we can neither hold him, nor safely let him go. justice is in one scale, and self-preservation in the other. of one thing I am certain, that as the passage of slaves from one state to another would not make a slave of a single human being who would not be so without it, so their diffusion over a greater surface would make them individually happier and proportionally facilitate the accomplishment of their emancipation; by dividing the burthen on a greater number of co-adjutors. an abstinence too from this act of power would remove the jealousy excited by the undertaking of Congress; to regulate the condition of the different descriptions of men composing a state. this certainly is the exclusive right of every state, which nothing

in the constitution has taken from them and given to the general government. could congress, for example say that the Non-freemen of Connecticut, shall be freemen, or that they shall not emigrate into any other state?

I regret that I am , Start insertion,now, End, to die in the belief that the useless sacrifice of themselves, by the generation of ’76. to acquire self government and happiness to their country, is to be thrown away by the unwise and unworthy passions of their sons, and that my only consolation is to be that I live not to weep over it. if they would but dispassionately weigh the blessings they would throw away against an abstract principle more likely to be effected by union than by scission, they would pause before they would perpetrate this act of suicide on themselves and of treason against the hopes of the world. to yourself as the faithful advocate of union I tender the offering of my high esteem and respect.