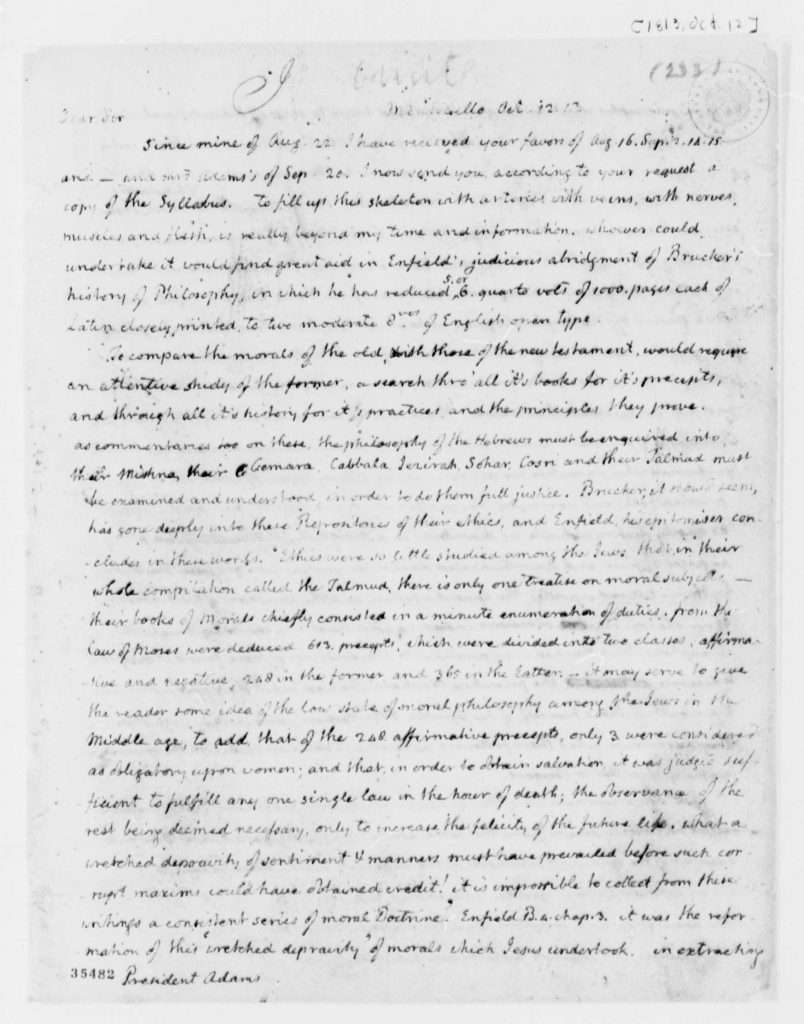 Since mine of Aug. 22. I have received your favors of Aug. 16. Sep. 2. 14. 15. and ____ and mrs Adams’s of Sep 20. I now send you, according to your request a copy of the Syllabus. to fill up this skeleton with arteries, with veins, with nerves, muscles and flesh, is really beyond my time and information. whoever could undertake it would find great aid in Enfield’s judicious abridgment of Brucker’s history of Philosophy, in which he has reduced 5. or 6. quarto vols of 1000. pages each of Latin closely printed, to two moderate 8 vos of English, open, type.

To compare the morals of the old, with those of the new testament, would require an attentive study of the former, a search thro’ all it’s books for it’s precepts, and through all it’s history for it’s practices, and the principles, they prove. as commentaries too on these, the philosophy of the Hebrews must be enquired into, their Mishna, their Gemara, Cabbala, Jezirah, Sohar, Cosri and their Talmud must be examined and understood, in order to do them full justice. Brucker, it should seem, has gone deeply into these Repositories of their ethics, and Enfield, his epitomiser, concludes in these words. “Ethics were so little studies among the Jews, that, in their whole compilation called the Talmud, there is only one treatise on moral subjects.— their books of Morals chiefly consisted in a minute enumeration of duties. from the law of Moses were deduced 613. precepts , which were divided into two classes, affirmative and negative, 248 in the former, and 365 in the latter.—it may serve to give the reader some idea of the low state of moral philosophy among the Jews in the Middle age, to add, that of the 248. affirmative precepts, only 3. were considered as obligatory upon women; and that, in order to obtain salvation, it was judges sufficient to fulfill any one single law in the hour of death; the observance of the rest being deemed necessary, only to increase the felicity of the future life. what a wretched depravity of sentiment & manners must have prevailed before such corrupt maxims could have obtained credit! it is impossible to collect from these writings a consistent series of moral Doctrine.’ Enfield B. 4. chap. 3. it was the reformation of this ‘wretched depravity’ of morals which Jesus undertook. in extracting 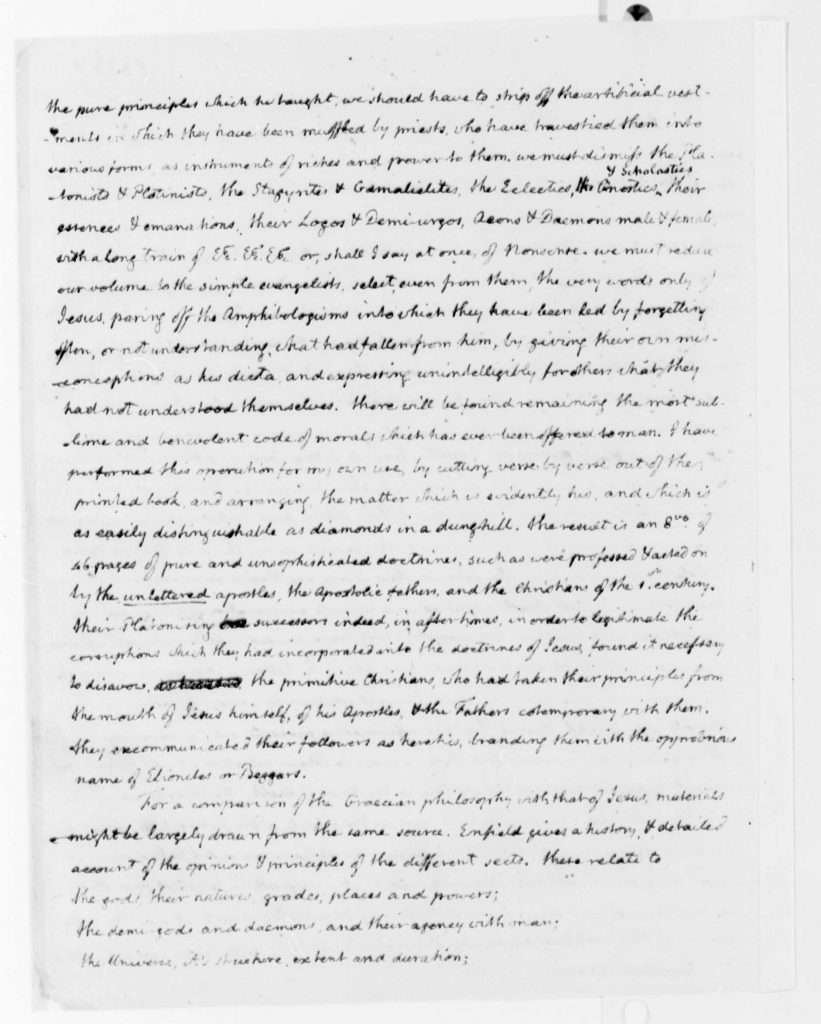 the pure principles which he taught, we should have to strip off the artificial vestments in which they have been muffled by priests, who have travestied them into various forms, as instruments of riches and power to them. we must dismiss the Platonists & Plotinists, the Stagyrites & Gamalielites, the Eclectis the Gnostics & Scholastics their essences & emanations, their Logos & Demi-urgos, Aeons & Daemons male & female, with a long train of Etc. Etc. Etc. or, shall I say at once, of Nonsense. we must reduce our volume to the simple evangelists, select, even from them, the very words only of Jesus, paring off the Amphibologisms into which they have been led by forgetting often, or not understanding, what had fallen from him, by giving their own misconceptions as his dicta, and expressing unintelligibly for others what they had not understood themselves. there will be found remaining the most sublime and benevolent code of morals which has ever been offered to man. I have performed this operation for my own use, by cutting verse by verse out of the printed book, and arranging the matter which is evidently, his, and which is as easily distinguishable as diamonds in a dunghill. the result is an 8 vo of 46. pages of pure and unsophisticated doctrines, such as were professed & acted on by the unlettered apostles, the Apostolic fathers, and the Christians of the 1st century. their Platonising successors indeed, in after times, in order to legitimate the corruptions which they had incorporated into the doctrines of Jesus, found it necessary to disavow, the primitive Christians, who had taken their principles from the mouth of Jesus himself, of his Apostles, & the Fathers contemporary with them. they excommunicated their followers as heretics, branding them with the opprobrious name of Ebionites or Beggards.

For a comparison of the Graecian philosophy with that of Jesus, materials might be largely drawn from the same source. Enfield gives a history, & detailed account of the opinions & principles of the different sects. these relate to the gods, their natures, grades, places and powers;
the demi-gods and daemons, and their agency with man;
the Universe, it’s structure, extent and duration; 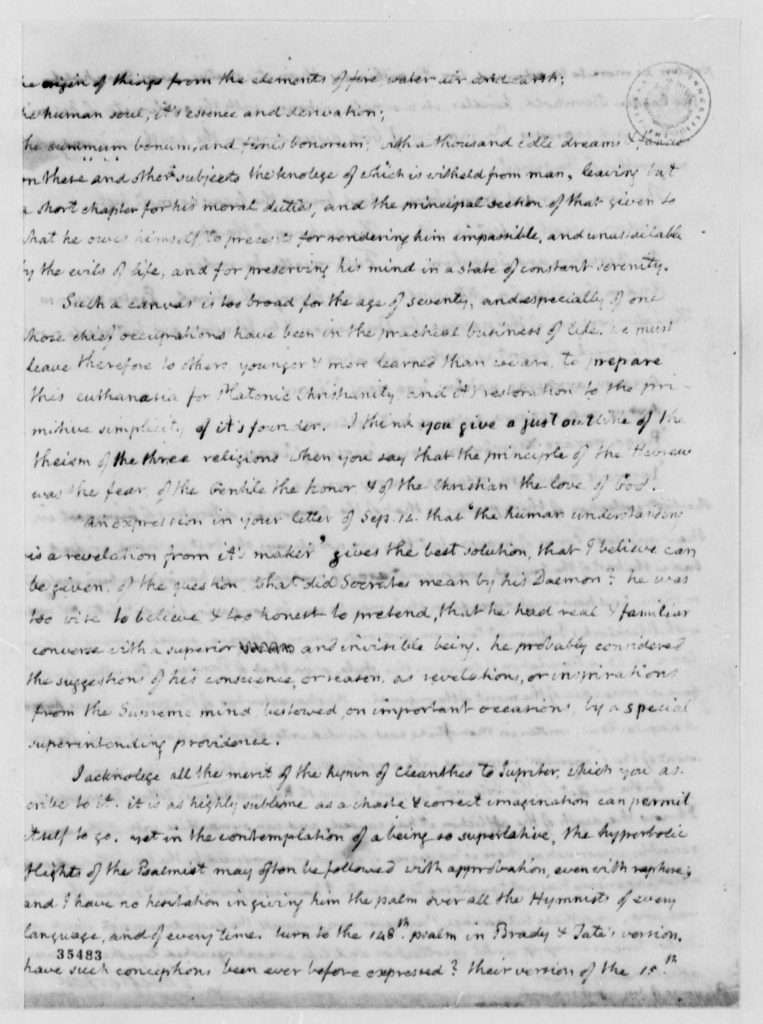 the origin of things from the elements of fire, water, air and earth;
the human soul, it’s essence and derivation;

the summum bonum, and finis bonorum; with a thousand idle dreams & fancies on these and other subjects the knolege of which is witheld from man, leaving but a short chapter for his moral duties, and the principal section of that given to what he owes himself, to precepts for rendering him impassible, and unassailable by the evils of life, and for preserving his mind in a state of constant serenity.

Such a canvas is too broad for the age of seventy, and especially of one whose chief occupations have been in the practical business of life. we must leave therefore to others, younger & more learned than we are, to prepare this euthanasia for Platonic Christianity, and it’s restoration to the primitive simplicity of it’s founder. I think you give a just outline of the theism of the three religions when you say that the principle of the Hebrew was the fear, of the Gentile the honor, & of the Christian the love of God.

An expression in your letter of Sep. 14. that ‘the human understanding is a revelation from it’s maker’ gives the best solution, that I believe can be given, of the question, what did Socrates mean by his Daemon? he was too wise to believe, & too honest to pretend, that he had real & familiar converse with a superior and invisible being. he probably considered the suggestions of his conscience, or reason, as revelations, or inspirations from the Supreme mind, bestowed, on important occasions, by a special superintending providence.

I acknolege all the merit of the hymn of Cleanthes to Jupiter, which you ascribe to it. it is as highly sublime as a chaste & correct imagination can permit itself to go. yet in the contemplation of a being so superlative, the hyperbolic flights of the Psalmist may often be followed with approbation, even with rapture; and I have no hesitation in giving him the palm over all the Hymnists of every language, and of every time. turn to the 148th psalm in Brady & Tate’s version. have such conceptions been ever before expressed? their version of the 15th 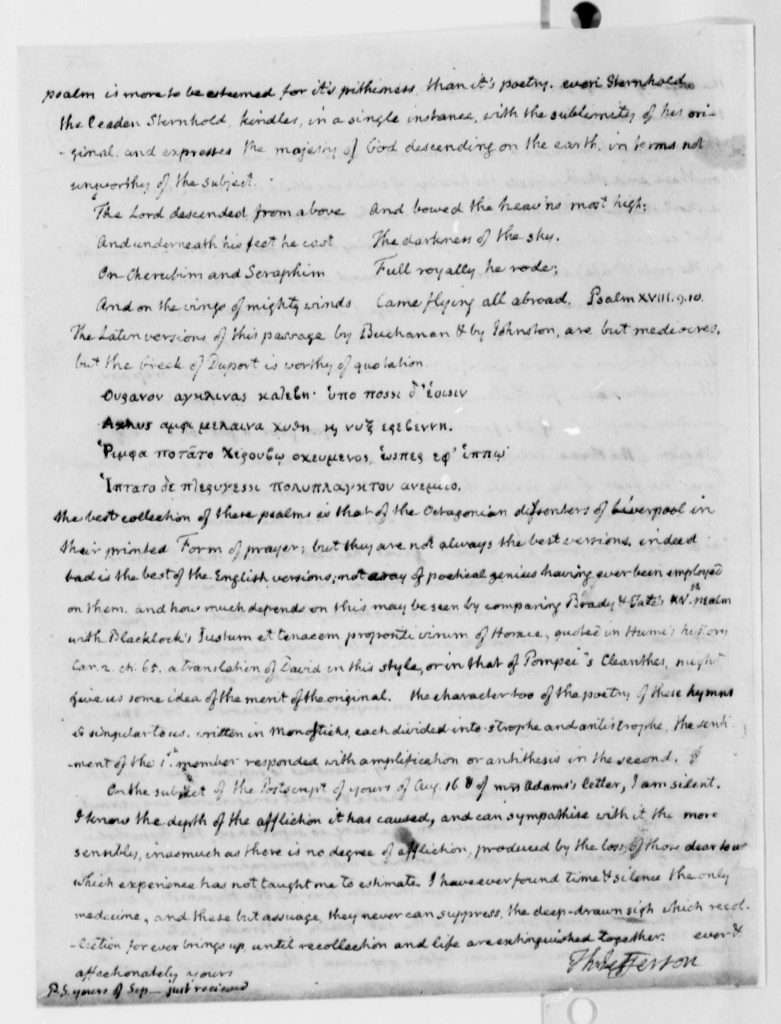 psalm is more to be esteemed for it’s pithiness, than it’s poetry. even Sternhold, the leader Sternhold, kindles, in a single instance, with the sublimity of his original, and expresses the majesty of God descending on the earth, in terms not unworthy of the subject.

‘The Lord descended from above

And bowed the heav’ns most high;

And underneath his feet he cast

The darkness of the sky.

On Cherubim and Seraphim

And on the wings of mighty winds

The best collection of these psalms is that of the Octagonian dissenters of Liverpool in their printed Form of prayer; but they are not always the best versions. indeed bad is the best of the English versions; not a ray of poetical genius having ever been employed on them. and how much depends on this may be seen by comparing Brady & Tate’s XVth psalm with Blacklock’s Justum et tenacem propositi virum of Horace, quoted in Hume’s history Car. 2. ch. 65. a translation of David in this style, or in that of Pompei’s Cleanthes, might give us some idea of the merit of the original. the character too of the poetry of these hymns is singular to us. written in Monostichs, each divided into strophe and antistrophe, the sentiment of the 1st member responded with amplification or antithesis in the second.

On the subject of the Postscript of yours of Aug. 16. & of mrs Adams’s letter, I am silent. I know the depth of the affliction it has caused, and can sympathise with it the more sensibly, inasmuch as there is no degree of affliction, produced by the loss of those dear to us which experience has not taught me to estimate. I have ever found time & silence the only medecine, and these but assuage, they never can suppress, the deep-drawn sigh which recollection for ever brings up, until recollection and life are extinguished together.