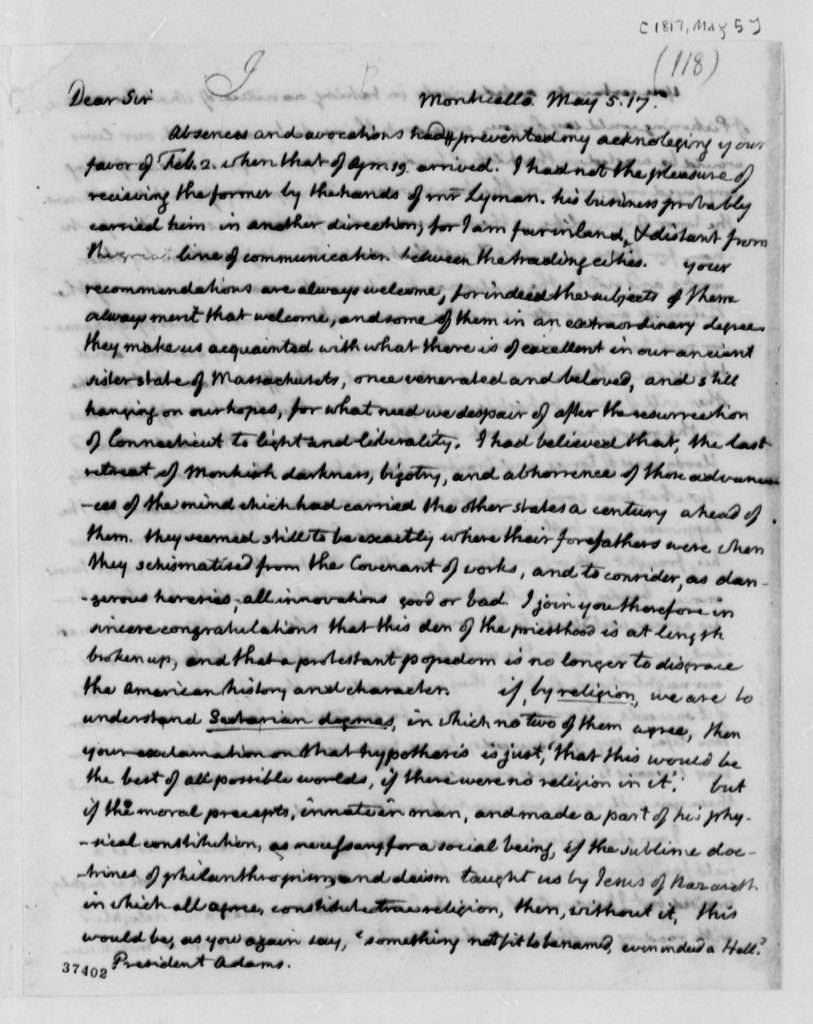 Dear Sir,—Absences and avocations had prevented my acknowledging your favor of February the 2d, when that of April the 19th arrived. I had not the pleasure of receiving the former by the hands of Mr. Lyman. His business probably carried him in another direction; for I am far inland, and distant from the great line of communication between the trading cities. Your recommendations are always welcome, for indeed, the subjects of them always merit that welcome, and some of them in an extraordinary degree. They make us acquainted with what there is excellent in our ancient sister State of Massachusetts, once venerated and beloved, and still hanging on our hopes, for what need we despair of after the resurrection of Connecticut to light and liberality. I had believed that the last retreat of monkish darkness, bigotry, and abhorrence of those advances of the mind which had carried the other States a century ahead of them. They seemed still to be exactly where their forefathers were when they schismatized from the covenant of works, and to consider as dangerous heresies all innovations good or bad. I join you, therefore, in sincere congratulations that this den of the priesthood is at length broken up, and that a Protestant Popedom is no longer to disgrace the American history and character. If by religion we are to understand sectarian dogmas, in which no two of them agree, then your exclamation on that hypothesis is just, “that this would be the best of all possible worlds, if there were no religion in it.” But if the moral precepts, innate in man, and made a part of his physical constitution, as necessary for a social being, if the sublime doctrines of philanthropism and deism taught us by Jesus of Nazareth, in which all agree, constitute true religion, then, without it, this would be, as you again say, “something not fit to be named even, indeed, a hell.” 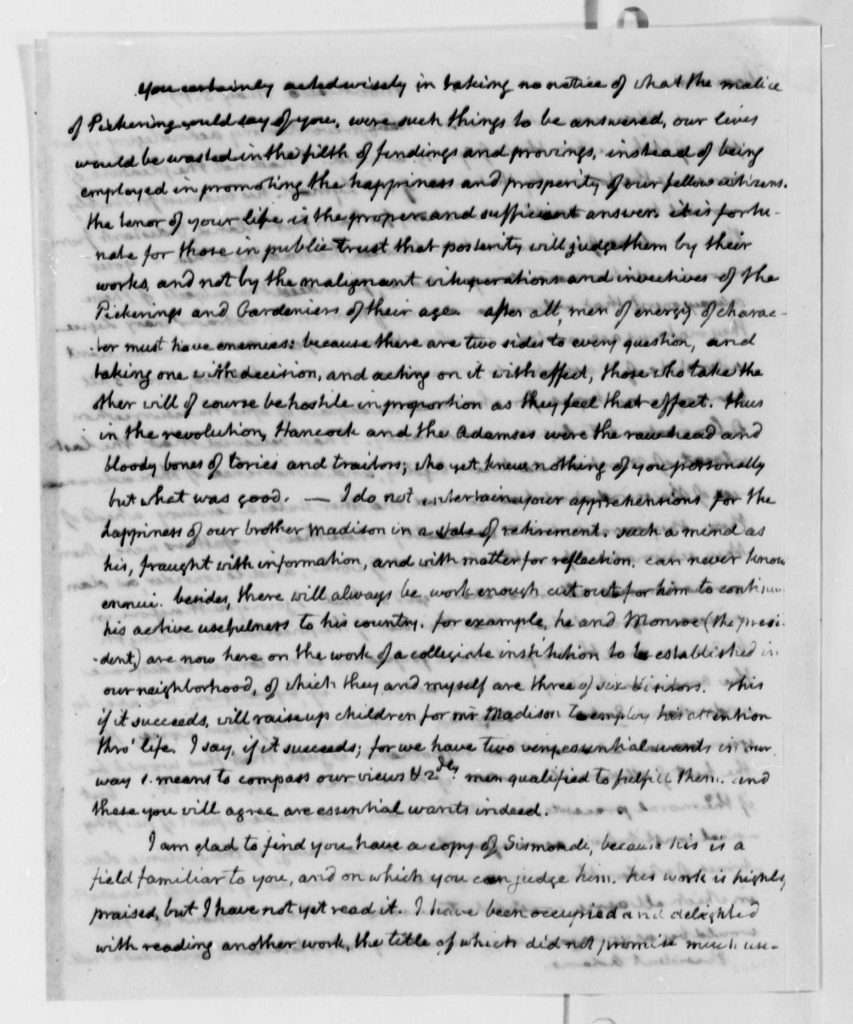 You certainly acted wisely in taking no notice of what the malice of Pickering could say of you. Were such things to be answered, our lives would be wasted in the filth of fendings and provings, instead of being employed in promoting the happiness and prosperity of our fellow citizens. The tenor of your life is the proper and sufficient answer. It is fortunate for those in public trust, that posterity will judge them by their works, and not by the malignant vituperations and invectives of the Pickerings and Gardiners of their age. After all, men of energy of character must have enemies; because there are two sides to every question, and taking one with decision, and acting on it with effect, those who take the other will of course be hostile in proportion as they feel that effect. Thus, in the Revolution, Hancock and the Adamses were the raw-head and bloody bones of tories and traitors who yet knew nothing of you personally but what was good. I do not entertain your apprehensions for the happiness of our brother Madison in a state of retirement. Such a mind as his, fraught with information and with matter for reflection, can never know ennui. Besides, there will always be work enough cut out for him to continue his active usefulness to his country. For example, he and Monroe (the President) are now here on the work of a collegiate institution to be established in our neighborhood, of which they and myself are three of six visitors. This, if it succeeds, will raise up children for Mr. Madison to employ his attention through life. I say if it succeeds; for we have two very essential wants in our way, first, means to compass our views; and, second, men qualified to fulfil them. And these, you will agree, are essential wants indeed.

I am glad to find you have a copy of Sismondi, because his is a field familiar to you, and on which you can judge him. His work is highly praised, but I have not yet read it. I have been occupied and delighted with reading another work, the title of which did not promise much use- 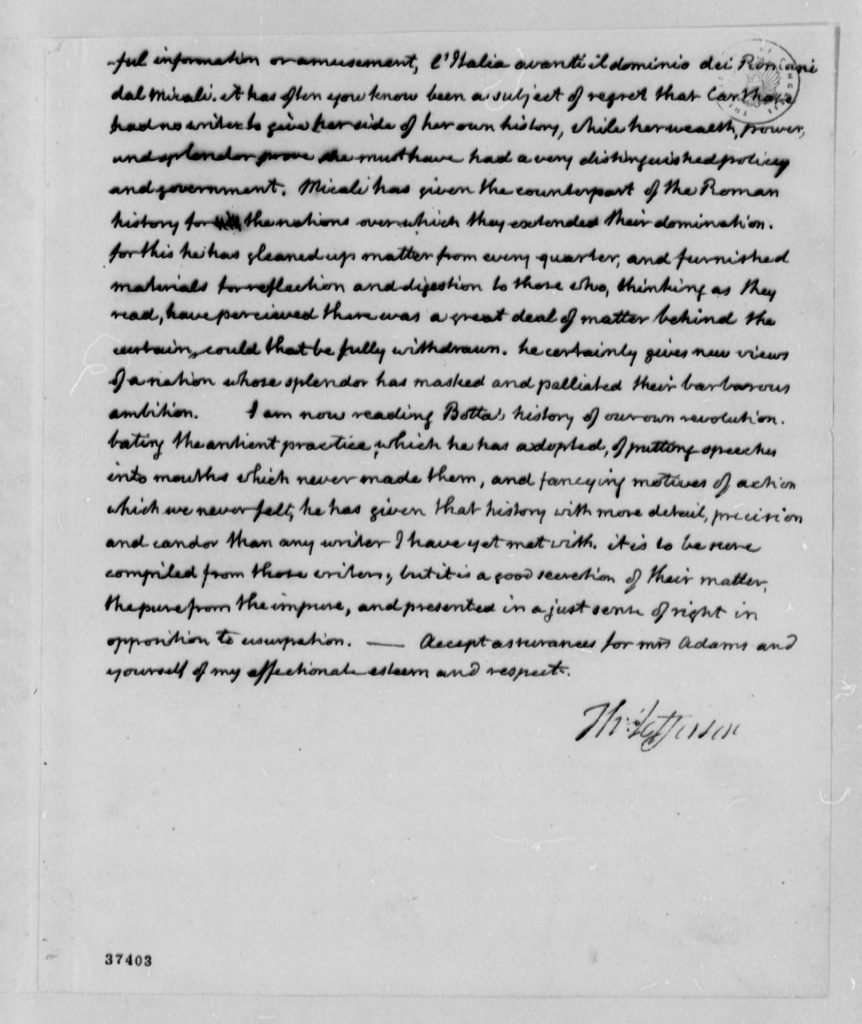 ful information or amusement, “l‘Italia avanti il dominio dei Romani dal Micali.” It has often, you know, been a subject of regret, that Carthage had no writer to give her side of her own history, while her wealth, power and splendor, prove she must have had a very distinguished policy and government. Micali has given the counterpart of the Roman history, for the nations over which they extended their dominion. For this he has gleaned up matter from every quarter, and furnished materials for reflection and digestion to those who, thinking as they read, have perceived that there was a great deal of matter behind the curtain, could that be fully withdrawn. He certainly gives new views of a nation whose splendor has masked and palliated their barbarous ambition. I am now reading Botta’s history of our own Revolution. Bating the ancient practice which he has adopted, of putting speeches into mouths which never made them, and fancying motives of action which we never felt, he has given that history with more detail, precision and candor, than any writer I have yet met with. It is, to be sure, compiled from those writers; but it is a good secretion of their matter, the pure from the impure, and presented in a just sense of right, in opposition to usurpation.

Accept assurances for Mrs. Adams and yourself of my affectionate esteem and respect.