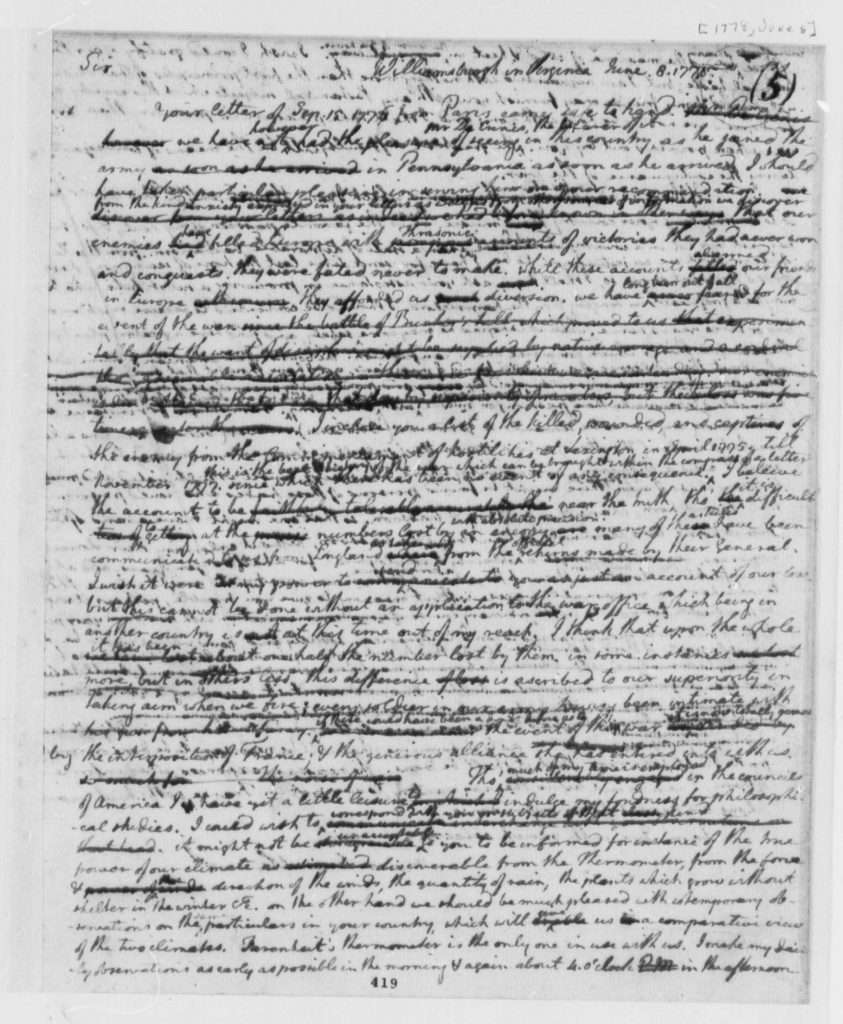 Your letter of Sep. 15. 1776 from Paris came safe to hand. We have not however had the pleasure of seeing Mr. De Crenis, the bearer of it in this country, as he joined the army in Pennsylvania as soon as he arrived. I should have taken particular pleasure in serving him on your recommendation. From the kind anxiety expressed in your letters as well as from other sources of information we discover that our enemies have filled Europe with Thrasonic accounts of victories they had never won and conquests they were fated never to make. While these accounts alarmed our friends in Europe they afforded us diversion. We have long been out of all fear for the event of the war. I inclose you a list of the killed, wounded, and captives of the enemy from the Commencement of hostilities at Lexington in April 1775, till November 1777. since which there has been no event of any consequence. This is the best history of the war which can be brought within the compass of a letter. I believe the account to be near the truth, tho’ it is difficult to get at the numbers lost by an enemy with absolute precision. Many of the articles have been communicated to us from England as taken from the official returns made by their General. I wish it were in my power to send you as just an account of our [losses] but this cannot be done without an application to the war office which being in another country is at this time out of my reach. I think that upon the whole it has been about one half the number lost by them. In some instances more, but in others less. This difference is ascribed to our superiority in taking aim when we fire; every soldier in our army having been intimate with his gun from his infancy. If there could have been a doubt before as to the event of the war, it is now totally removed by the interposition of France; and the generous alliance she has entered into with us.

Tho’ much of my time is employed in the councils of America I have yet a little leisure to indulge my fondness for philosophical studies. I could wish to correspond with you on subjects of that kind. It might not be unacceptable to you to be informed for instance of the true power of our climate as discoverable from the Thermometer, from the force and direction of the winds, the quantity of rain, the plants which grow without shelter in the winter &c. On the other hand we should be much pleased with cotemporary observations on the same particulars in your country, which will give us a comparative view of the two climates. Farenheit’s thermometer is the only one in use with us. I make my daily observations as early as possible in the morning and again about 4. o’clock in the afternoon, 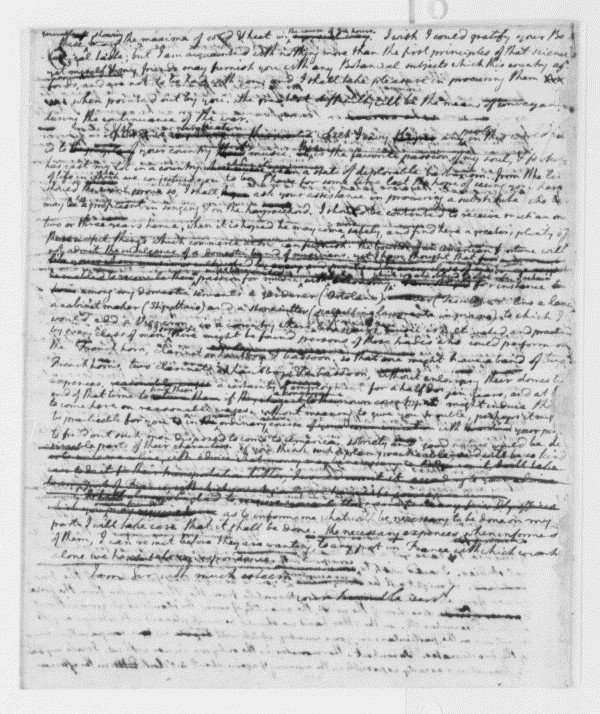 these generally showing the maxima of cold and heat in the course of 24 hours. I wish I could gratify your Botanical taste; but I am acquainted with nothing more than the first principles of that science, yet myself and my friends may furnish you with any Botanical subjects which this country affords, and are not to be had with you: and I shall take pleasure in procuring them when pointed out by you. The greatest difficulty will be the means of conveyance during the continuance of the war.

If there is a gratification which I envy any people in this world it is to your country its music. This is the favorite passion of my soul, and fortune has cast my lot in a country where it is in a state of deplorable barbarism. From the [line] of life in which we conjecture you to be, I have for some time lost the hope of seeing you here. Should the event prove so, I shall ask your assistance in procuring a substitute who may be a proficient in singing and on the harpsichord. I should be contented to receive such an one two or three years hence, when it is hoped he may come more safely, and find here a greater plenty of those useful things which commerce alone can furnish. The bounds of an American fortune will not admit the indulgence of a domestic band of musicians. Yet I have thought that a passion for music might be reconciled with that oeconomy which we are obliged to observe. I retain for instance among my domestic servants a gardener (Ortolano), weaver (Tessitore di lino e lan[a),] a cabinet maker (Stipettaio) and a stonecutter (scalpellino lavorante in piano) to which I would add a Vigneron. In a country where, like yours, music is cultivated and practised by every class of men I suppose there might be found persons of those trades who could perform on the French horn, clarinet or hautboy and bassoon, so that one might have a band of two French horns, two clarinets and hautboys and a bassoon, without enlarging their domest[ic] expences. A certainty of employment for a half dozen years, and at [the] end of that time to find them if they chose it a conveyance to their own country might induce [them] to come here on reasonable wages. Without meaning to give you trouble, perhaps it mig[ht] be practicable for you in your ordinary intercourse with your pe[ople] to find out such men disposed to come to America. Sobriety and good nature would be desireable parts of their characters. If you think such a plan practicable, and will be so kind as to inform me what will be necessary to be done on my part, I will take care that it shall be done. The necessary expences, when informed of them, I can remit before they are wanting, to any port in France with which country alone we have safe correspondence.

I am Sir with much esteem your humble servt., T. J.

Number of the Killed, Wounded, and Captives of the British Army in the Course of the American War.