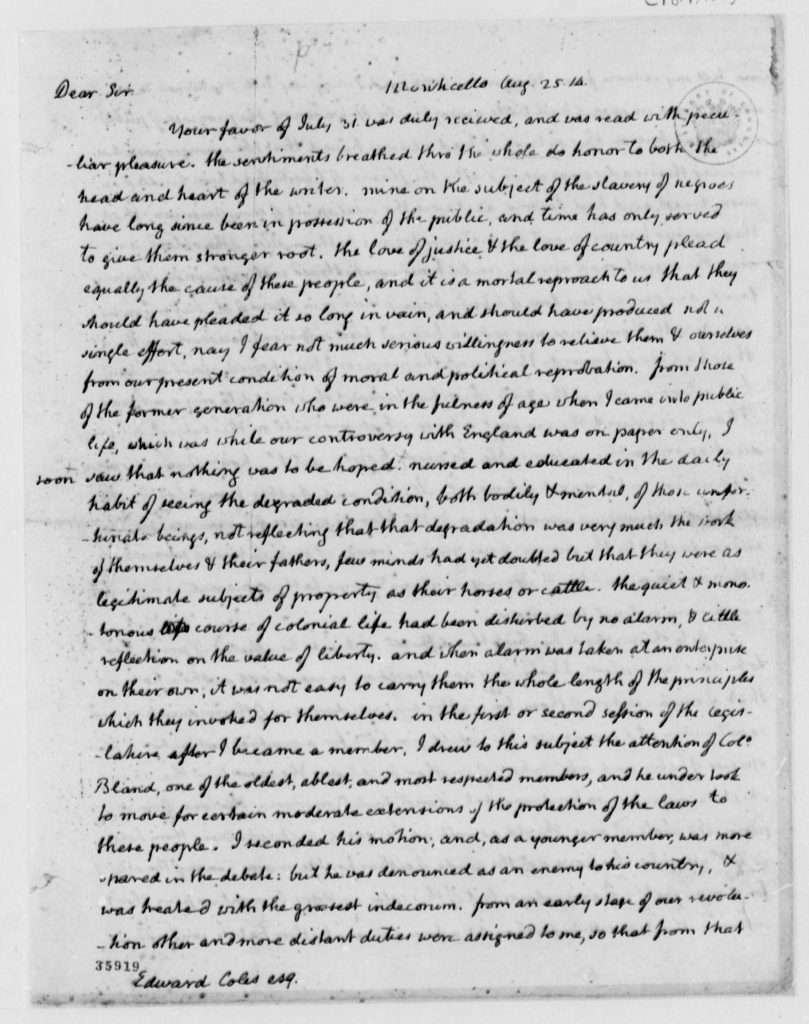 Your favor of July 31. was duly recieved, and was read with peculiar pleasure. the sentiments breathed thro’ the whole do honor to both the head and heart of the writer. mine on the subject of the slavery of negroes have long since been in possession of the public, and time has only served to give them stronger root. the love of justice & the love of country plead equally the cause of these people, and it is a mortal reproach to us that they should have pleaded it so long in vain, and should have produced not a single effort, nay I fear not much serious willingness to relieve them & ourselves from our present condition of moral and political reprobation. from those of the former generation who were in the fulness of age when I came into public life, which was while our controversy with England was on paper only, I soon saw that nothing was to be hoped. nursed and educated in the daily habit of seeing the degraded condition, both bodily & mental, of those unfortunate beings, not reflecting that that degradation was very much the work of themselves & their fathers, few minds had yet doubted but that they were as legitimate subjects of property as their horses or cattle. the quiet & monotonous course of colonial life had been disturbed by no alarm, & little reflection on the value of liberty. and when alarm was taken at an enterprise on their own, it was not easy to carry them the whole length of the principles which they invoked for themselves. in the first or second session of the legislature after I became a member, I drew to this subject the attention of Colo Bland, one of the oldest, ablest, and most respected members, and he undertook to move for certain moderate extensions of the protection of the laws to these people. I seconded his motion, and, as a younger member, was more spared in the debate: but he was denounced as an enemy to his country, & was treated with the grossest indecorum. from an early stage of our revolution other and more distant duties were assigned to me, so that from that 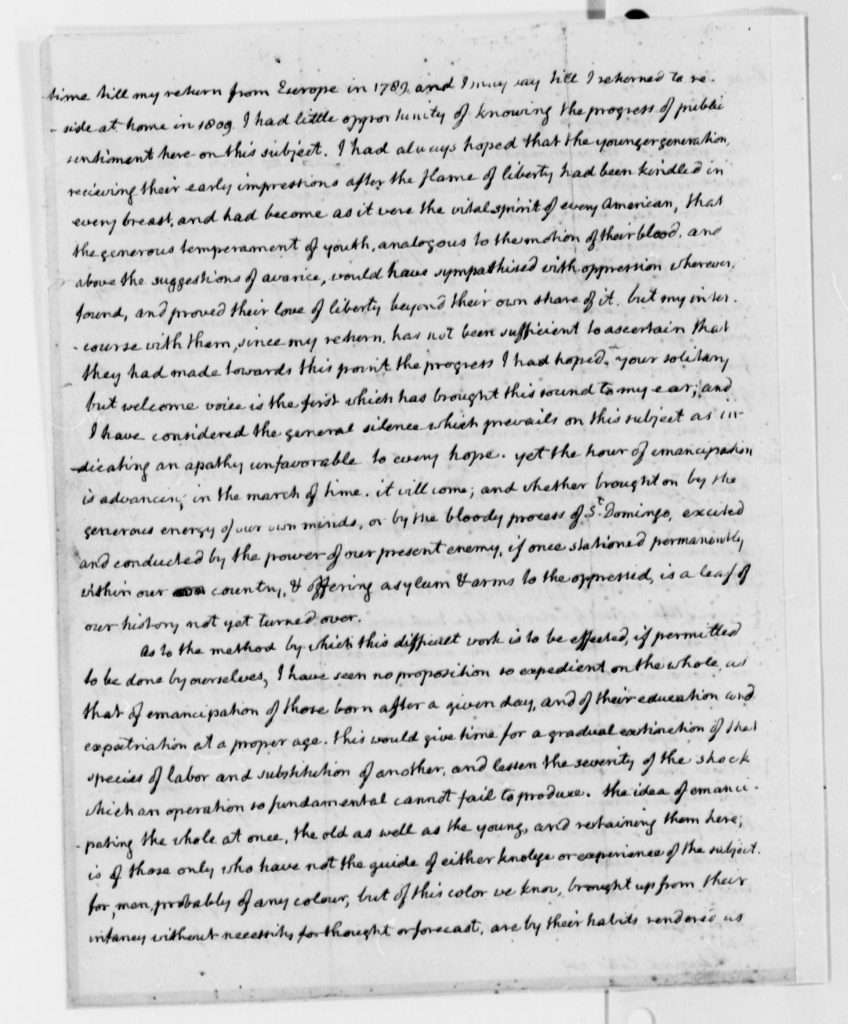 time till my return from Europe in 1789. and I may say till I returned to reside at home in 1809. I had little opportunity of knowing the progress of public sentiment here on this subject. I had always hoped that the younger generation, recieving their early impressions after the flame of liberty had been kindled in every breast, and had become as it were the vital spirit of every American, that the generous temperament of youth, analogous to the motion of their blood, and above the suggestions of avarice, would have sympathised with oppression wherever found, and proved their love of liberty beyond their own share of it. but my intercourse with them, since my return, has not been sufficient to ascertain that they had made towards this point the progress I had hoped. your solitary but welcome voice is the first which has brought this sound to my ear; and I have considered the general silence which prevails on this subject as indicating an apathy unfavorable to every hope. yet the hour of emancipation is advancing in the march of time. it will come; and whether brought on by the generous energy of our minds, or by the blood process of St Domingo, excited and conducted by the power of our present enemy, if once stationed permanently within our country, & offering asylum & arms to the oppressed, is a leaf of our history not yet turned over.

As to the method by which this difficult work is to be effected, if permitted to be done by ourselves, I have seen no proposition so expedient on the whole, as that of emancipation of those born after a given day, and of their education and expatriation at a proper age. this would give time for a gradual extinction of that species of labor and substitution of another, and lessen the severity of the shock which an operation so fundamental cannot fail to produce. the idea of emancipating the whole at once, the old as well as the young, and retaining them here, is of those only who have not the guide of either knolege or experience of the subject. for, men, probably of any colour, but of this color we know, brought up from their infancy without necessity for thought or forecast, are by their habits rendered as 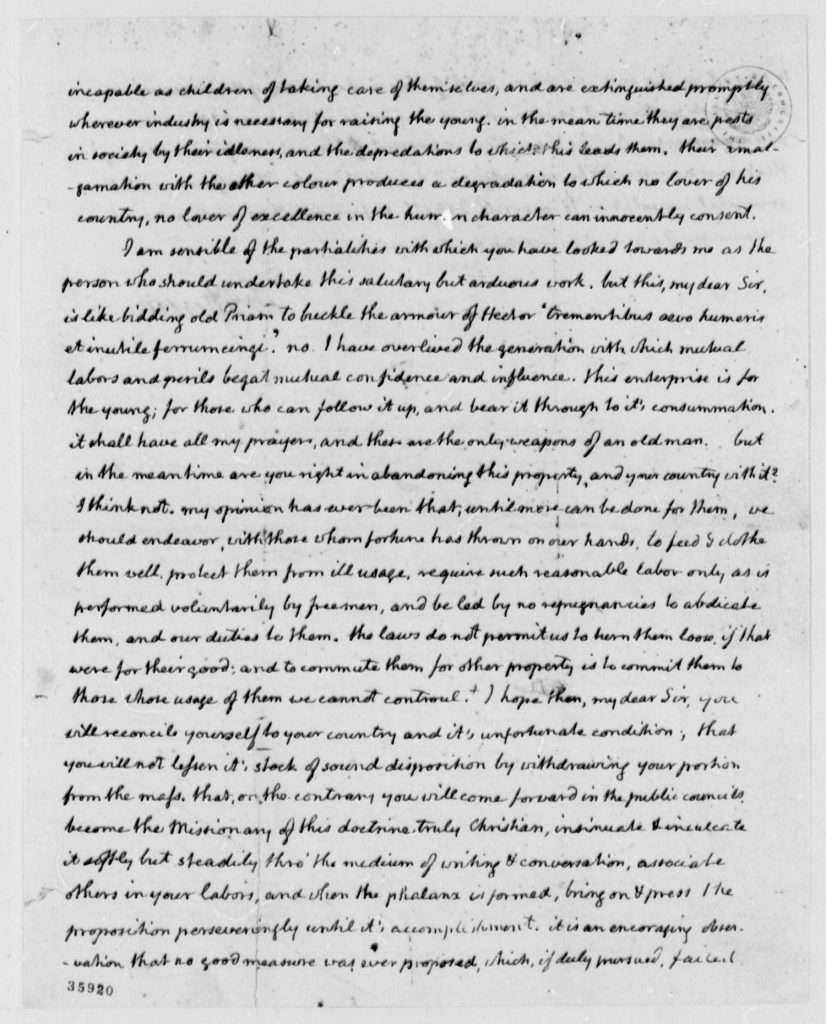 incapable as children of taking care of themselves, and are extinguished promptly wherever industry is necessary for raising the young. in the mean time they are pests in society by their idleness, and the depredations to which this leads them. their amalgamation with the other colour produces a degradation to which no lover of his country, no lover of excellence in the human character can innocently consent.

I am sensible of the partialities with which you have looked towards me as the person who should undertake this salutary but arduous work. but this, my dear Sir, is like bidding old Priam to buckle the armour of Hector ‘trementibus aevo humeris et inutile ferrum cingi.’ no. I have overlived the generation with which mutual labors and perils begat mutual confidence and influence. this enterprise is for the young; for those who can follow it up, and bear it through to it’s consummation. it shall have my prayers, and these are the only weapons of an old man. but in the mean time are you right in abandoning this property, and your country with it? I think not. my opinion has ever been that, until more can be done for them, we should endeavor, with those whom fortune has thrown on our hands, to feed & clothe them well, protect them from ill usage, require such reasonable labor only as is performed voluntarily by freemen, and be led by no repugnancies to abdicate them, and our duties to them. the laws do not permit us to turn them loose, if that were for their good: and to commute them for other property is to commit them to those whose usage of them we cannot controul. I hope then, my dear Sir, you will reconcile yourself to your country and it’s unfortunate condition; that you will not lessen it’s stock of sound disposition by withdrawing your portion from the mass. that, on the contrary you will come forward in the public councils, become the Missionary of this doctrine truly Christian, insinuate & inculcate it softly but steadily thro’ the medium of writing & conversation, associate others in your labors, and when the phalanx is formed, bring on & press the proposition perseveringly until it’s accomplishment. it is an encoraging observation that no good measure was ever proposed which, if duly pursued, failed 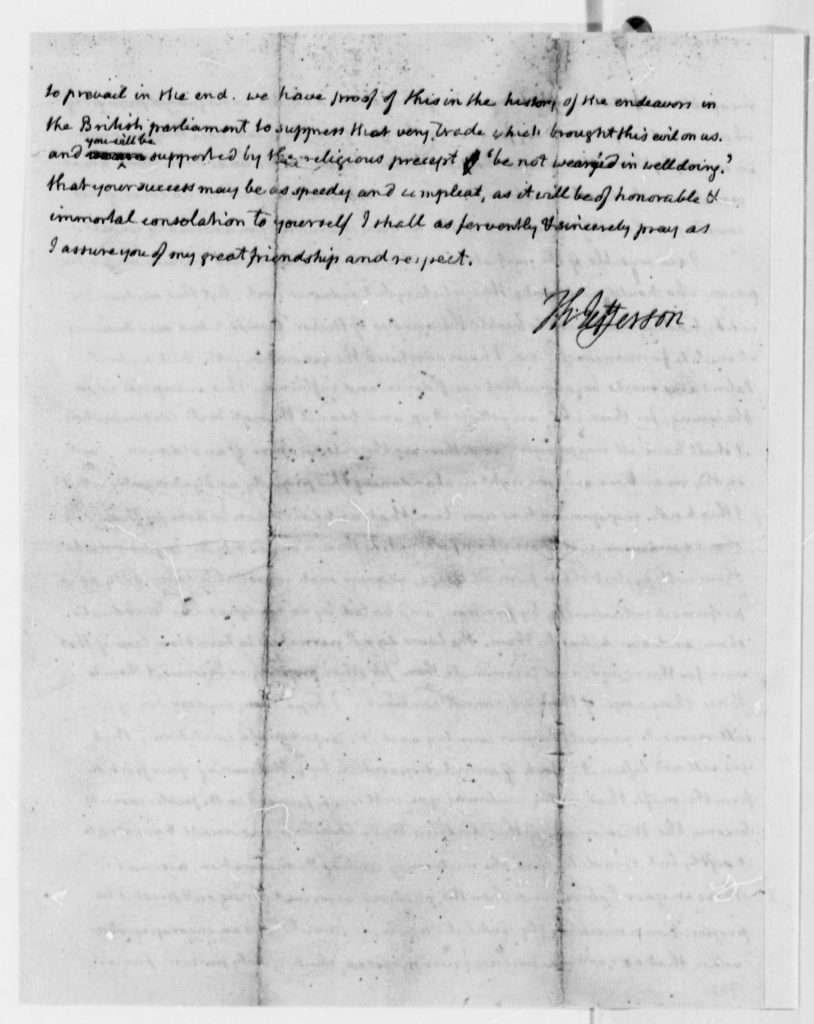 to prevail in the end. we have proof of this in the history of the endeavors in the British parliament to suppress that very trade which brought this evil on us. and you will be supported by the religious precept ‘be not wearied in well doing.’ that your success may be as speedy and compleat, as it will be of honorable & immortal consolation to yourself I shall as fervently & sincerely pray as I assure you of my great friendship and respect.

P.S. will you give to the inclosed letter the proper address of place to find your brother?

RELATED CONTENT
Categories:
Type:
MAP
TIMELINE
August 25, 1814
Thomas Jefferson writes a letter to Edward Coles explaining why he cannot act on behalf of the abolition of slavery and why Coles should not free his own slaves.
FURTHER READING