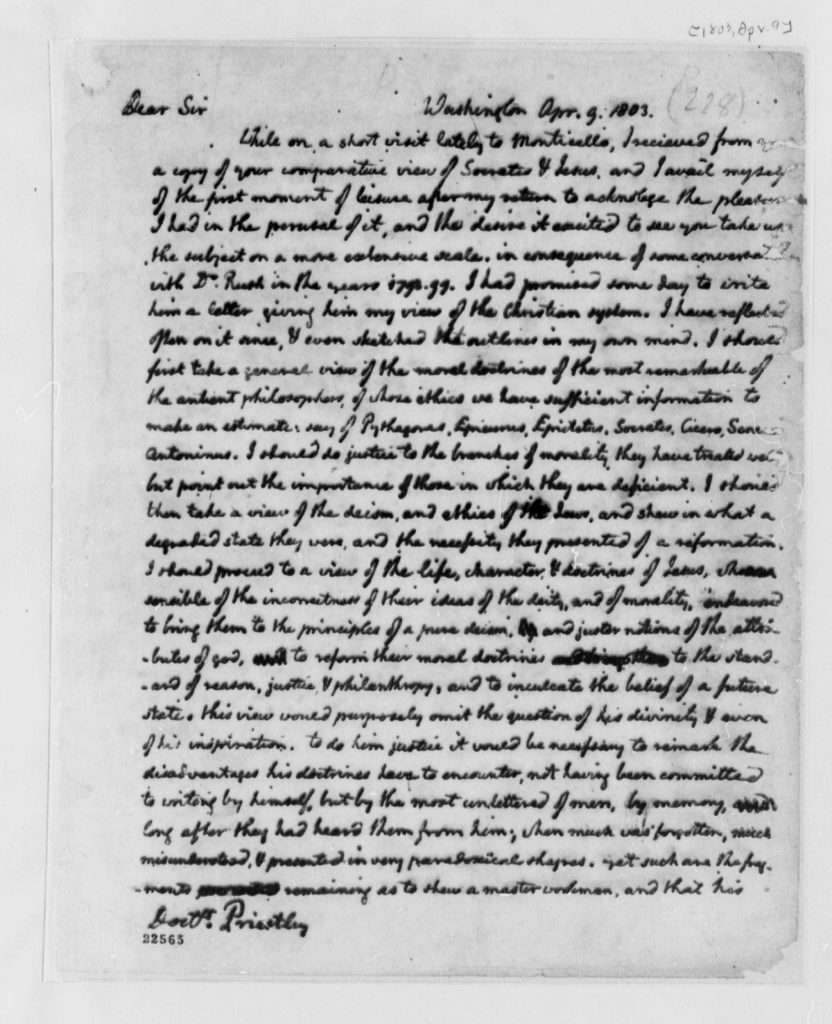 Dear Sir,—While on a short visit lately to Monticello, I received from you a copy of your comparative view of Socrates and Jesus, and I avail myself of the first moment of leisure after my return to acknowledge the pleasure I had in the perusal of it, and the desire it excited to see you take up the subject on a more extended scale. In consequence of some conversation with Dr. Rush, in the year 1798–99, I had promised some day to write him a letter giving him my view of the Christian system. I have reflected often on it since, and even sketched the outlines in my own mind. I should first take a general view of the moral doctrines of the most remarkable of the ancient philosophers, of whose ethics we have sufficient information to make an estimate, say Pythagoras, Epicurus, Epictetus, Socrates, Cicero, Seneca, Antoninus. I should do justice to the branches of morality they have treated well; but point out the importance of those in which they are deficient. I should then take a view of the deism and ethics of the Jews, and show in what a degraded state they were, and the necessity they presented of a reformation. I should proceed to a view of the life, character, and doctrines of Jesus, who sensible of incorrectness of their ideas of the Deity, and of morality, endeavored to bring them to the principles of a pure deism, and juster notions of the attributes of God, to reform their moral doctrines to the standard of reason, justice and philanthropy, and to inculcate the belief of a future state. This view would purposely omit the question of his divinity, and even his inspiration. To do him justice, it would be necessary to remark the disadvantages his doctrines had to encounter, not having been committed to writing by himself, but by the most unlettered of men, by memory, long after they had heard from him; when much was forgotten, much misunderstood, and presented in every paradoxical shape. Yet such are the fragments remaining as to show a master workman, and that his 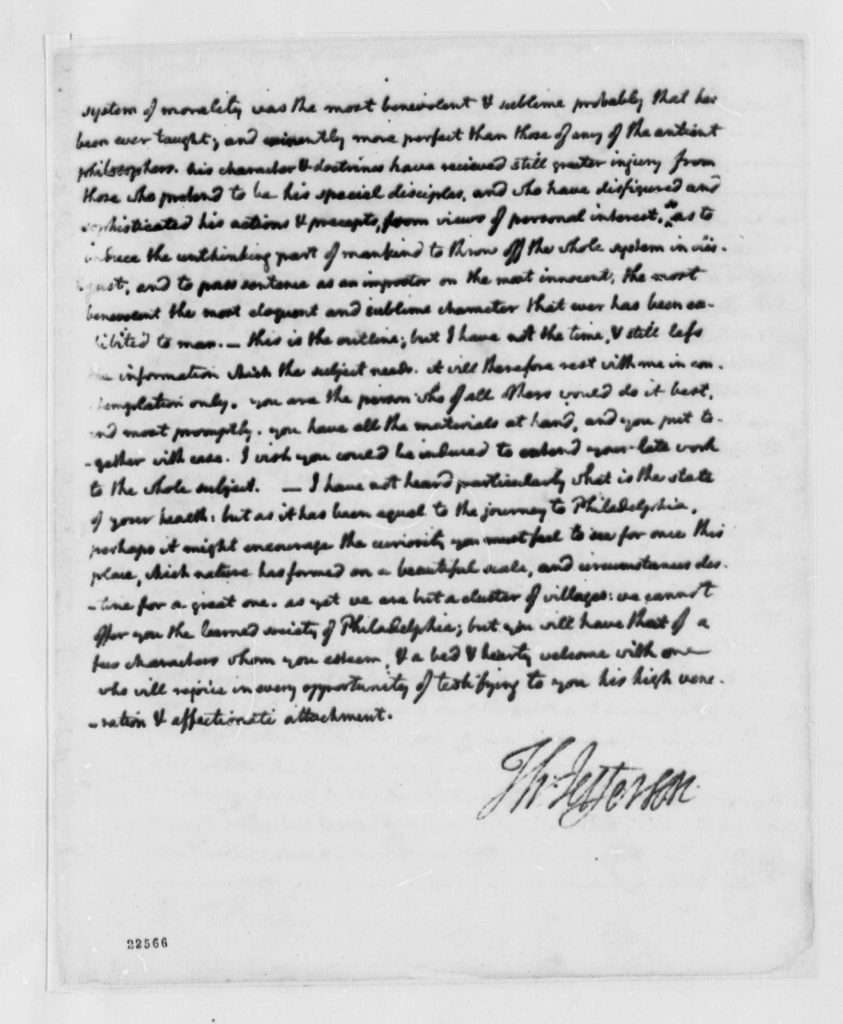 system of morality was the most benevolent and sublime probably that has been ever taught, and consequently more perfect than those of any of the ancient philosophers. His character and doctrines have received still greater injury from those who pretend to be his special disciples, and who have disfigured and sophisticated his actions and precepts, from views of personal interest, so as to induce the unthinking part of mankind to throw off the whole system in disgust, and to pass sentence as an impostor on the most innocent, the most benevolent, the most eloquent and sublime character that ever has been exhibited to man. This is the outline; but I have not the time, and still less the information which the subject needs. It will, therefore, rest with me in contemplation only. You are the personal of all others would do it best, and most promptly. You have all the materials at hand, and you put together with ease. I wish you could be induced to extend your late work to the whole subject. I have not heard particularly what is the state of your health; but as it has been equal to the journey to Philadelphia, perhaps it might encourage the curiosity you must feel to see for once this place, which nature has formed on a beautiful scale, and circumstances destine for a great one. As yet we are but a cluster of villages; we cannot offer you the learned society of Philadelphia; but you will have that of a few characters whom you esteem, and a bed and hearty welcome with one who will rejoice in every opportunity of testifying to you his high veneration and affectionate attachment.

RELATED CONTENT
Categories:
Type:
MAP
TIMELINE
April 9, 1803
Thomas Jefferson writes a letter to Dr. Joseph Priestley, author of An History of the Corruptions of Christianity (1782), outlining a book he'd like to write on Christianity if he had the time.
FURTHER READING