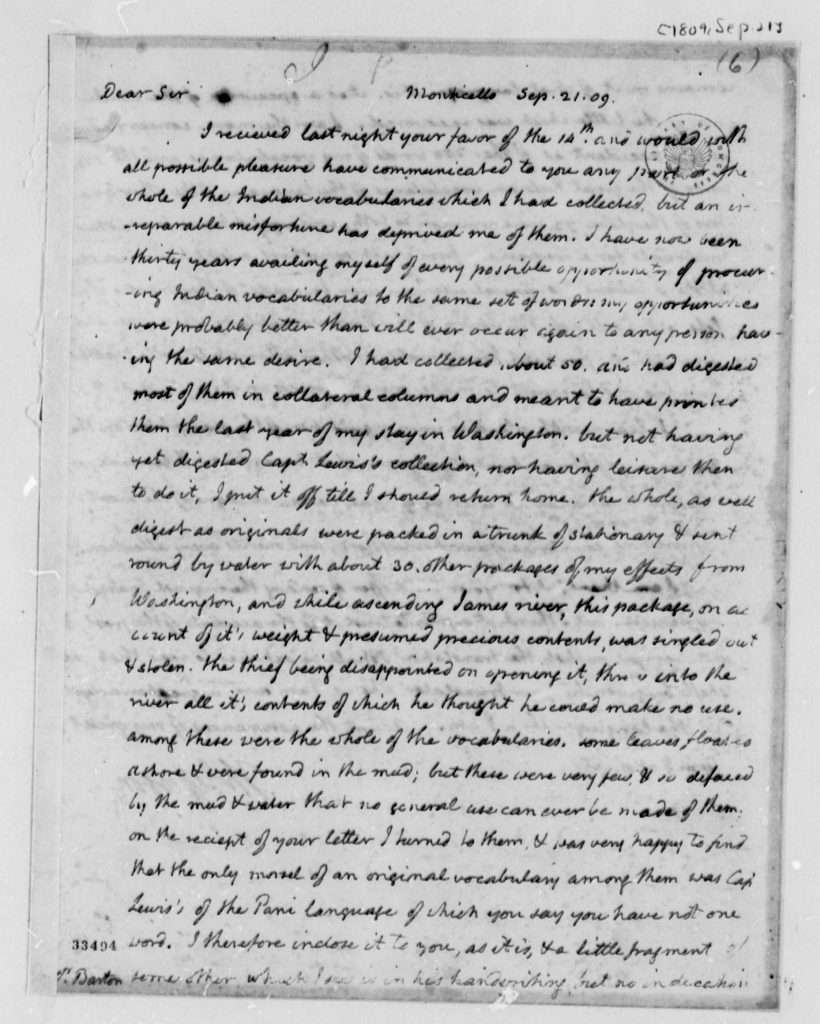 I recieved last night your favor of the 14th and would with all possible pleasure have communicated to you any part or the whole of the Indian vocabularies which I had collected, but an irreparable misfortune has deprived me of them. I have now been thirty years availing myself of every possible opportunity of procuring Indian vocabularies to the same set of words: my opportunities were probably better than will ever occur again to any person having the same desire. I had collected about 50. and had digested most of them in collateral columns and meant to have printed them the last year of my stay in Washington; but not having yet digested Capt Lewis’s collection, nor having leisure then to do it, I put it off till I should return home. the whole, as well digest as originals were packed in a truck of stationary & sent round by water with about 30. other packages of my effects from Washington, and while ascending James river, this package, on account of it’s weight & presumed precious contents, was singled out & stolen. the thief being disappointed on opening it, threw into the river all it’s contents of which he thought he could make no use. among these were the whole of the vocabularies. some leaves floated ashore & were found in the mud; but these were very few, & so defaced by the mud & water that no general use can ever be made of them, on the reciept of your letter I turned to them, & was very happy to find that the only morsel of an original vocabulary among them was Capt Lewis’s of the Pani [Pawnee] language of which you say you have not one word. I therefore inclose it to you, as it is, & a little fragment of some other, which I see is in his handwriting, but no indication 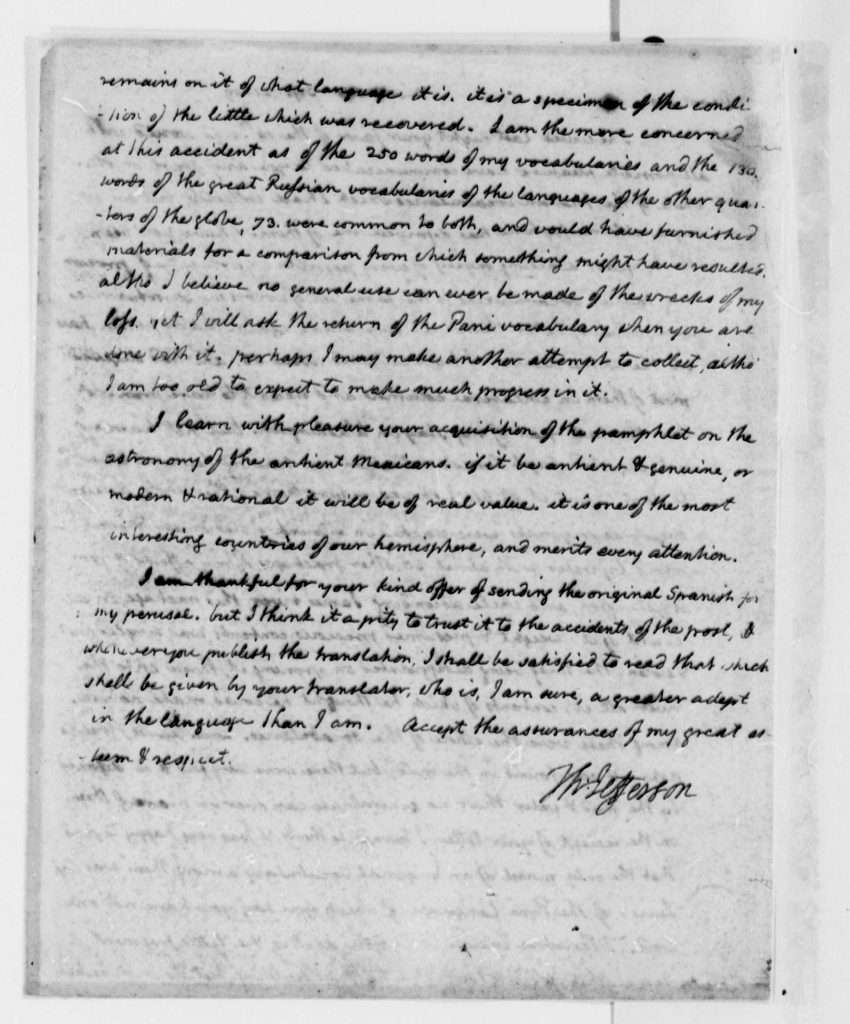 remains on it of what language it is. it is a specimen of the condition of the little which was recovered. I am the more concerned at this accident as of the 250 words of my vocabularies and the 130. words of the great Russian vocabularies of the languages of the other quarters of the globe, 73. were common to both, and would have furnished materials for a comparison from which something might have resulted. altho I believe no general use can ever be made of the wrecks of my loss; yet I will ask the return of the Pani vocabulary when you are done with it. perhaps I may make another attempt to collect, altho’ I am too old to expect to make much progress in it.

I learn with pleasure your acquisition of the pamphlet on the astronomy of the antient Mexicans. if it be antient & genuine, or moderns & rational it will be of real value. it is one of the most interesting countries of our hemisphere, and merits every attention.

I am thankful for your kind offer of sending the original Spanish for my perusal. but I think it a pity to trust it to the accidents of the post, & whenever you publish the translation, I shall be satisfied to read that which shall be given by your translator, who is, I am sure, a greater adept in the language than I am. Accept the assurances of my great esteem & respect.

“A Dictionarie of the Indian Language”; an excerpt from Historie and Travaile into Virginia Britannia by William Strachey (1612) “The maner of their language”; an excerpt from “Map of Virginia. With a Description of the Countrey, the Commodities, People, Government and Religion” by John Smith (1612) Letter from Peter S. DuPonceau to Thomas Jefferson (1820) Letter (with Enclosure) from Peter S. DuPonceau to Thomas Jefferson (1820) “Nottoway Indians” from Gentleman’s Magazine (1821)