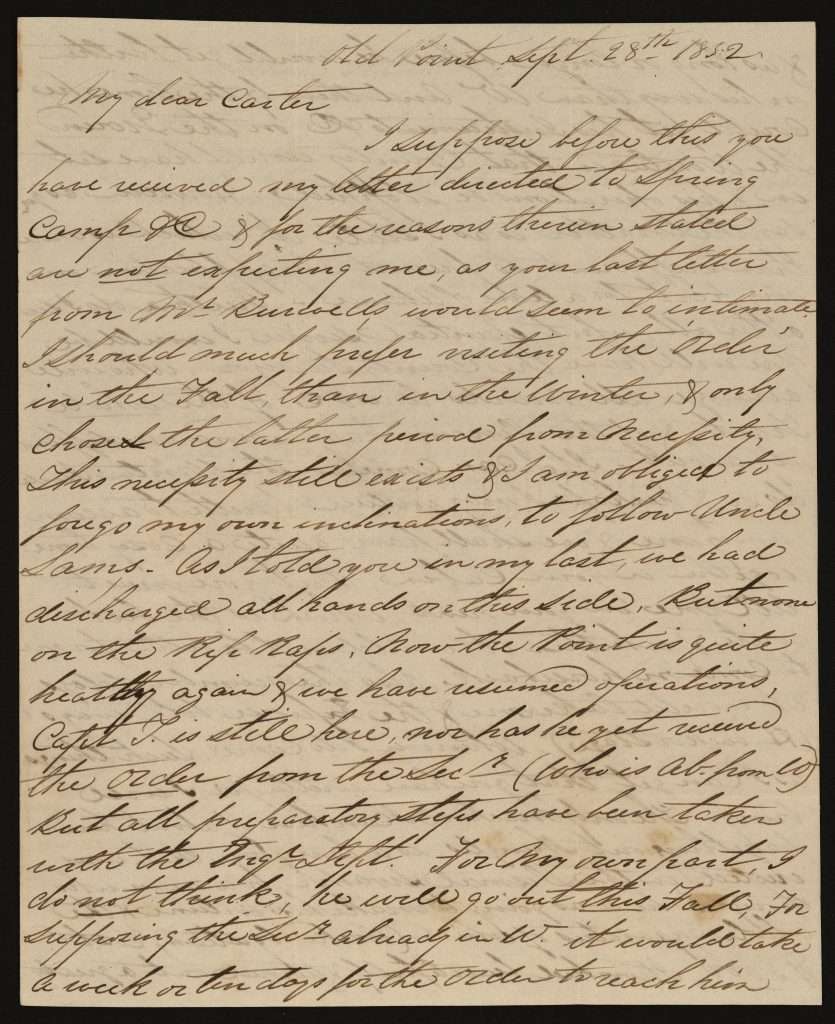 I suppose before this you have received my letter directed to Spring Camp etc & for the reasons therein stated are not expecting me, as your last letter from Mr. Burwell’s would seem to intimate. I should much prefer visiting the “Order” in the Fall, than in the Winter, & only chose the latter period from Necessity, This necessity still exists & I am obliged to forego my own inclinations, to follow Uncle Sams—As I told you in my last, we had discharged all hands on this side, But none on the Rip Raps, Now the Point is quite healthy again & we have resumed operations, Capt. T. is still here, nor has he yet received the order from the Secr (Who is ab. from W) But all preparatory steps have been taken with the Engr. Dept. For My own part, I do not think, he will go out this Fall, For supposing the Secr already in W. it would take a week or ten days for the Order to reach him & 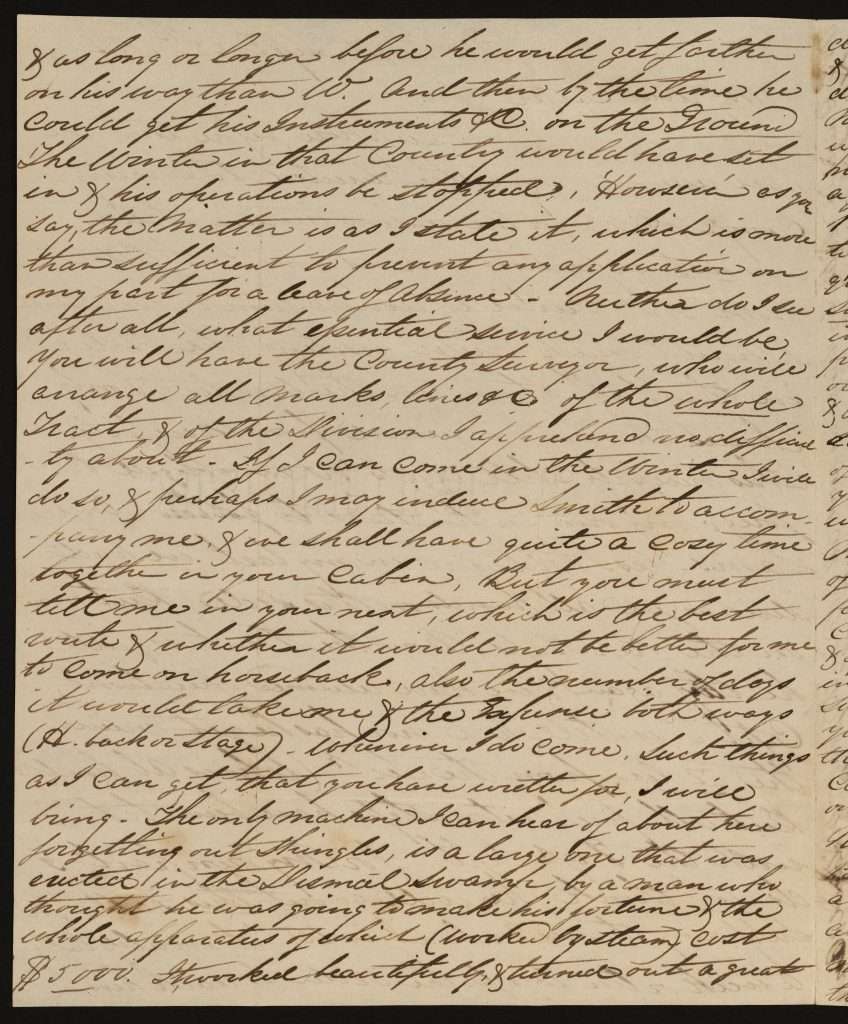 as long or longer before he would get farther on his way than W. And then by the time he could get his Instruments etc. on the Ground The Winter in that Country would have set in & his operations be stopped. However as you say, the Matter is as I state it, which is more than sufficient to prevent any application on my part for a leave of Absence—Neither do I see after all, what essential service I would be, You will have the County Surveyor, who will arrange all marks, lines etc. of the whole Tract, & of the Division I apprehend no difficulty about—If I can come in the Winter I will do so, & perhaps I may induce Smith to accompany me, & we shall have quite a cosy time together in your cabin, But you must tell me in your next, which is the best route & whether it would not be better for me to come on horseback, also the number of days it would take me & the Expense both ways (H. back or Stage)—whenever I do come. Such things as I can get, that you have written for, I will bring—The only machine I can hear of about here forgetting our Shingles, is a large one that was erected in the Dismal Swamp, by a man who thought he was going to make his fortune & the whole apparatus of which (worked by steam) cost $5000. It worked beautifully, & turned out a great 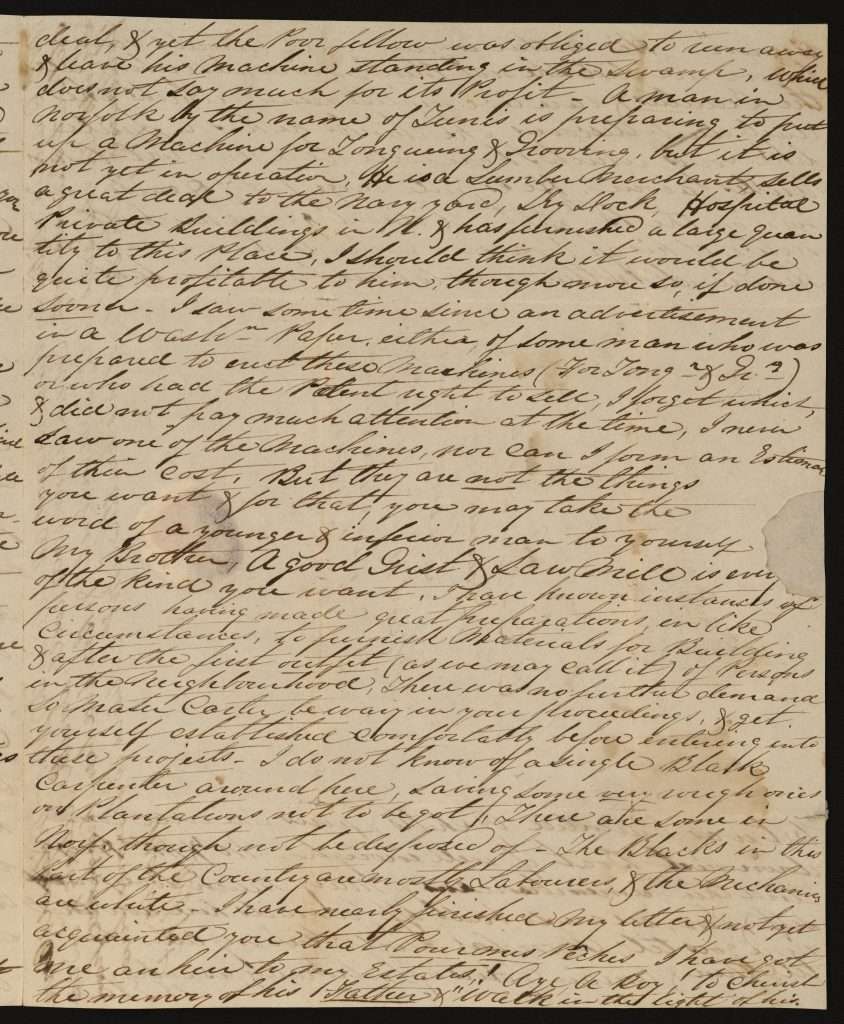 deal, & yet the Poor fellow was obliged to run away & leave his machine standing in the Swamp, which does not say much for its Profit—A man in Norfolk by the name of Tunis is preparing to put up a Machine for Tongueing & Grooving, but it is not yet in operation. He is a Lumber Merchant, sells a great deal to the Navy yard, Dry Dock, Hospital Private Buildings in N. & has furnished a large quantity to this Place. I should think it would be quite profitable to him, though more so, if done sooner—I saw some time since an advertisement in a Wash-n Paper, either of some man who was prepared to erect these Machines (For Tong-n Gr-) or who had the Patent right to sell, I forget which, & did not pay much attention at the time, I never saw one of the Machines, nor can I form an Estimate of the cost. But they are not the things you want & for that you may take the word of a younger & inferior man to yourself My Brother, a good Grist & Saw Mill is every of the kind you want. I have known instances of persons having made great preparations, in like circumstances, to furnish materials for Building & after the first outfit (as we may call it) of Persons in the Neighborhood, There was no further demand So Master Carter be wary in your proceedings, & get yourself established comfortably before entering into these projects—I do not know of a single Black Carpenter around here, saving some very rough ones on Plantations not to be got. There are some in Norf. though not be disposed of—The Blacks in this Part of the Country are mostly Labourers, & the Mechanics are white—I have nearly finished my letter & not yet acquainted you that Pour mes Veches I have got me an heir to my Estates! Aye, a Boy! to cherish the memory of his Father “walk in the light of his 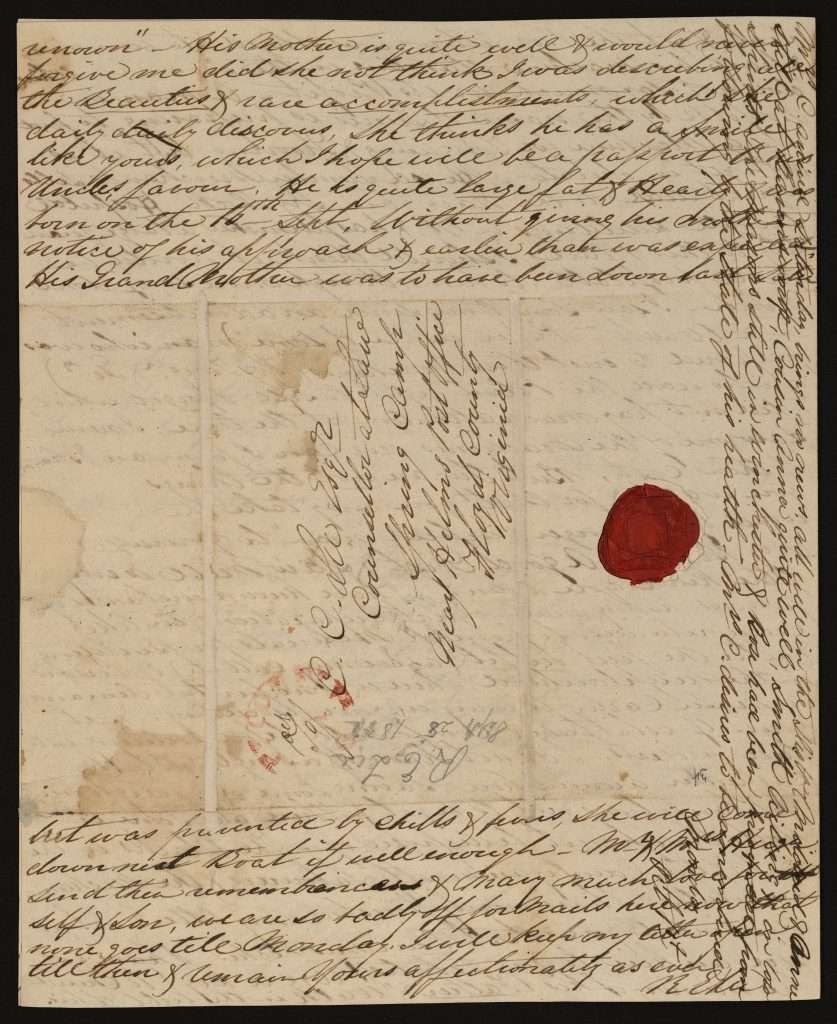 renown”—His Mother is quite well & would never forgive me did she not think I was describing all the Beauties & rare accomplishments, which she daily discovers. She thinks he has a Smile like yours, which I hope will be a passport to his ncle’s favour. He is quite large fat & Hearty & was born on the 16th Sept, Without giving his mother notice of his approach & earlier than was expected. His grandmother was to have been down later. but was prevented by chills & fevers, She will come down next Boat if well enough—Mr. & Mrs. Huger send their remembrances & Mary much Love for self & Son, we are so badly off for Mails here now that none goes till Monday. I will keep my letter opened till then & remain

Yours affectionately as ever

Mrs. C. arrived Saturday, brings no news. All well in the Distr. Mildred & Anne still at Ravenscroft, Cousin Anna quite well, Smith Ailing & in low Spirits. The Masons still in Winchester & Rose had been prevented from following by the State of his—Mrs. C. desires to be remembered Monday Oct 1st