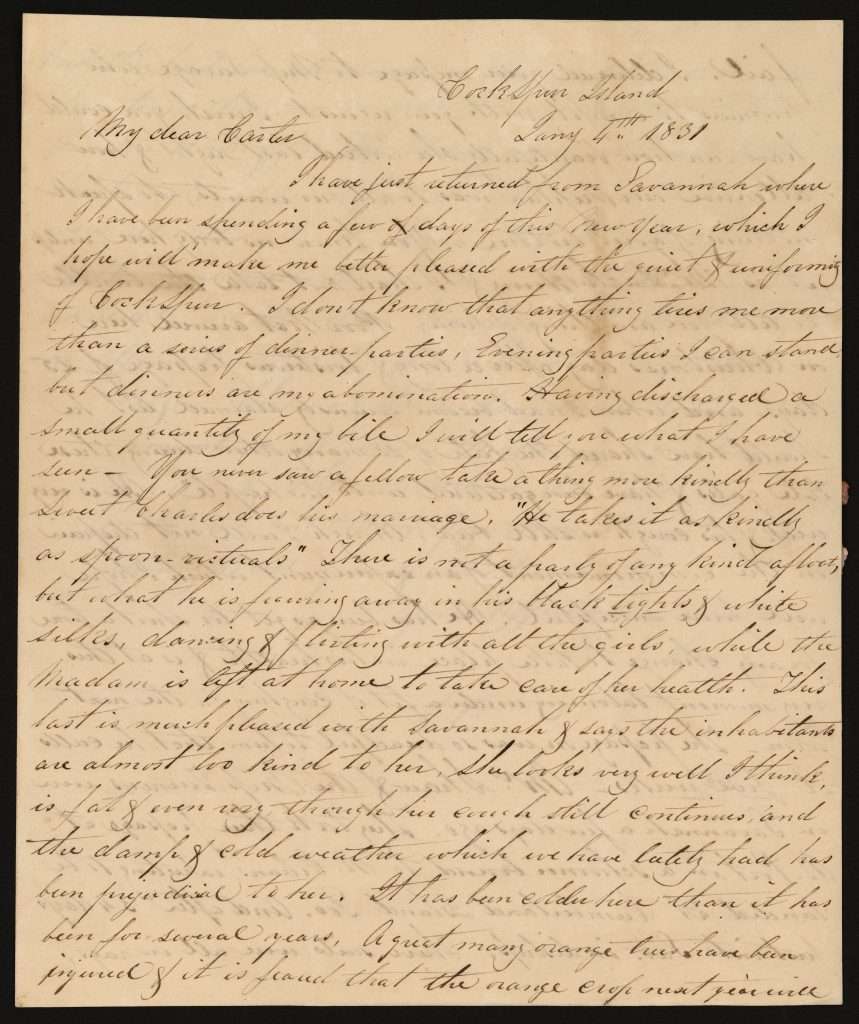 I have just returned from Savannah where I have been spending a few of days of this New Year, which I hope will make me better pleased with the quiet & uniformity of CockSpur. I don’t know that anything tries me more than a series of dinner parties. Evening parties I can stand but dinners are my abomination. Having discharged a small quantity of my bile I will tell you what I have seen—You never saw a fellow take a thing more kindly than Sweet Charles does his marriage. “He takes it as kindly as spoon-victuals” There is not a party of any kind afloat, but what he is figuring away in his black tights & white silks, dancing & flirting with all the girls, while the Madam is left at home to take care of her health. This last is much pleased with Savannah & says the inhabitants are almost too kind to her, she looks very well I think, is fat & even rosy, though her cough still continues, and the damp & cold weather which we have lately had has been prejudicial to her. It has been colder here than it has been for several years. A great many orange trees have been injured & it is feared that the orange crop next year will 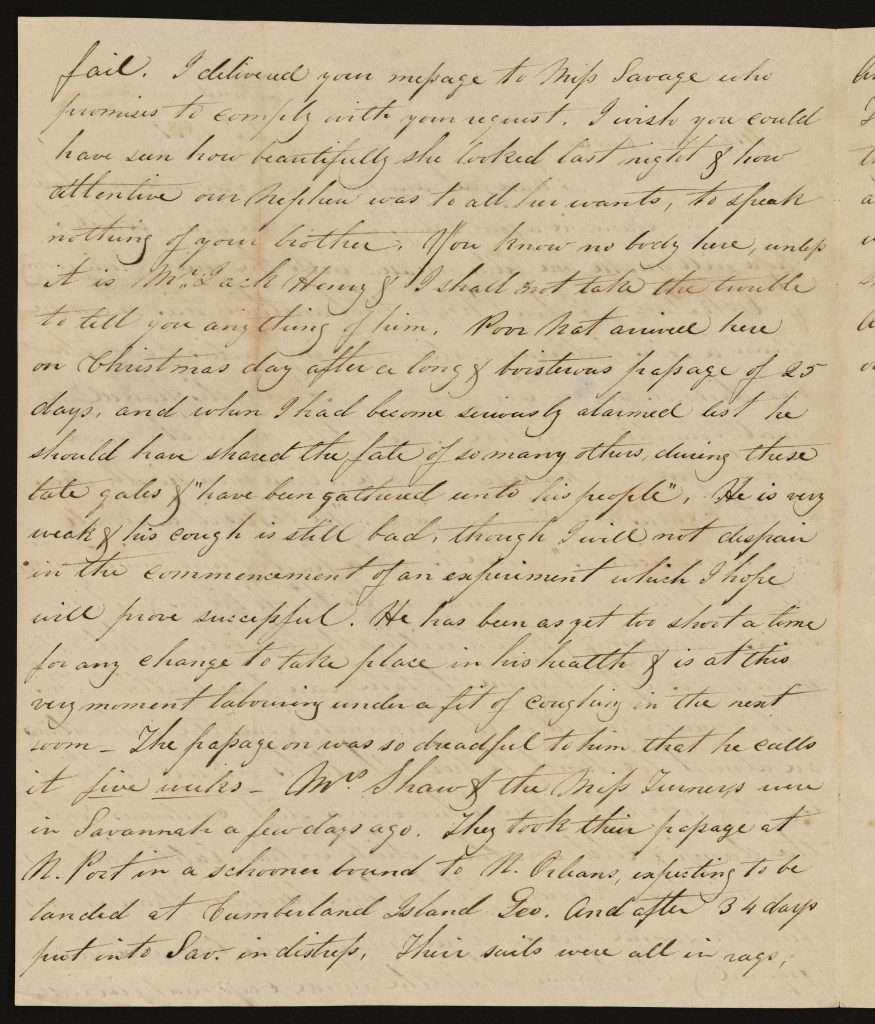 fail. I delivered your message to Miss Savage who promises to comply with your request. I wish you could have seen how beautifully she looked last night & how attentive our nephew was to all her wants, to speak nothing of your brother. You know no body here, unless it is Mr. Jack Henry & I shall not take the trouble to tell you any thing of him. Poor Nat arrived here on Christmas day after a long & boisterous passage of 25 days, and when I had become seriously alarmed lest he should have shared the fate of so many others, during these late gales & “have been gathered unto his people.” He is very weak & his cough is still bad, though I will not despair in the commencement of an experiment which I hope will prove successful. He has been as yet too short a time for any change to take place in his health & is at this very moment labouring under a fit of coughing in the next room – The passage on was so dreadful to him that he calls it five weeks – Mrs. Shaw & the Miss Turner’s were in Savannah a few days ago. They took their passage at N. Port in a schooner bound to N. Orleans, expecting to be landed at Cumberland Island Geo. And after 34 days put into Sav. in distress, Their sails were all in rags; 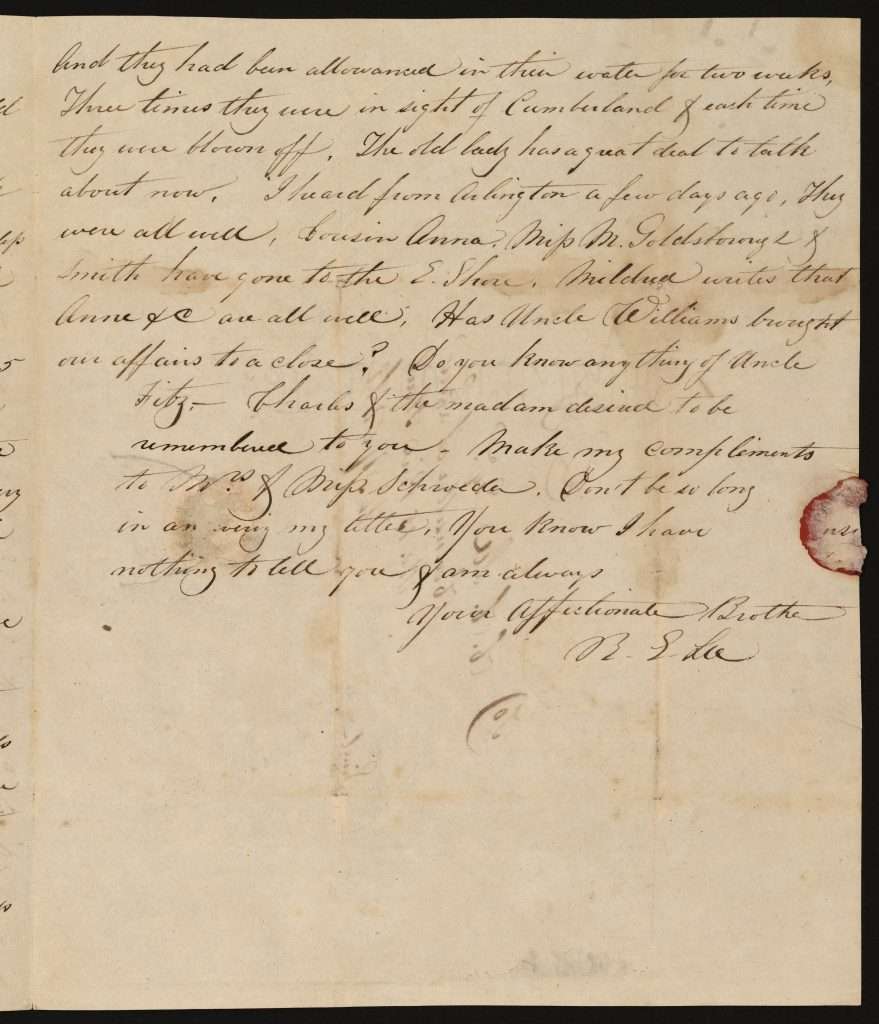 And they had been allowanced in their water for two weeks, Three times they were in sight of Cumberland & each time they were blown off. The old lady has a great deal to talk about now. I heard from Arlington a few days ago. They were all well. Cousin Anna, Miss M. Goldsborough & Smith have gone to the E. Shore. Mildred writes that Anne etc are all well. Has Uncle Williams brought our affairs to a close? Do you know anything of Uncle Fitz. – Charles & the madam desired to be remembered to you – Make my compliments to Mrs. & Miss Schroeder. Don’t be so long in answering my letter. You know I have nothing to tell you & am always 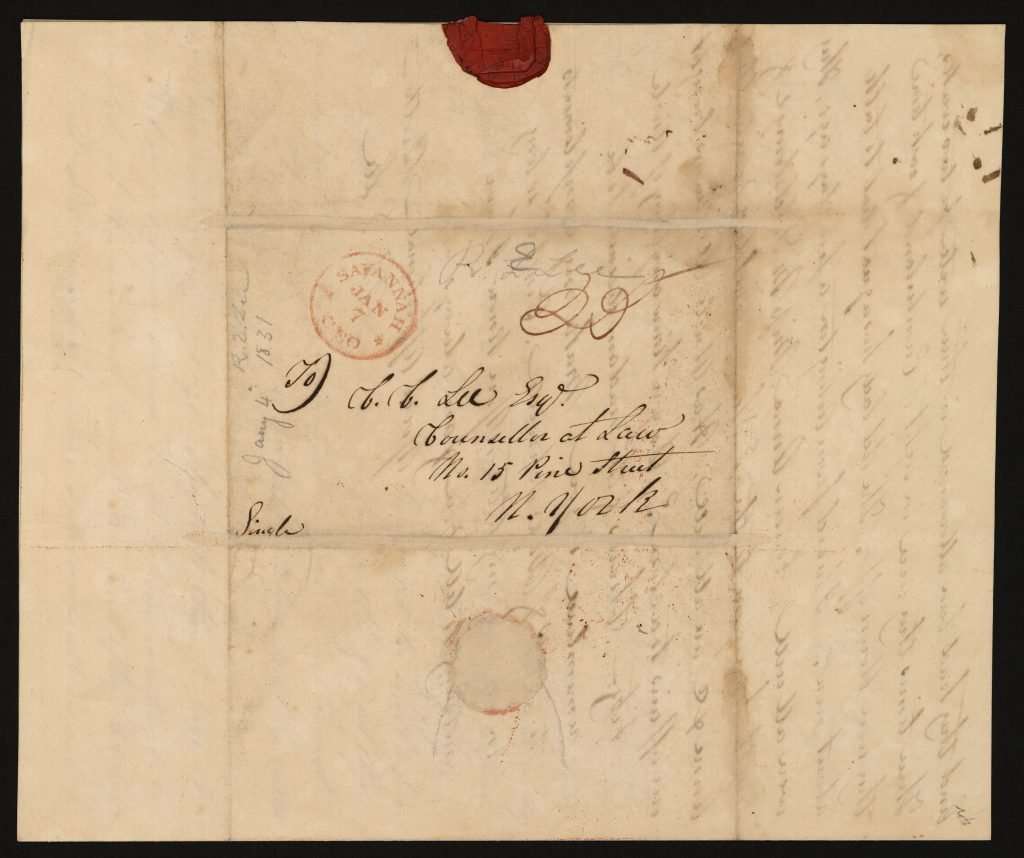