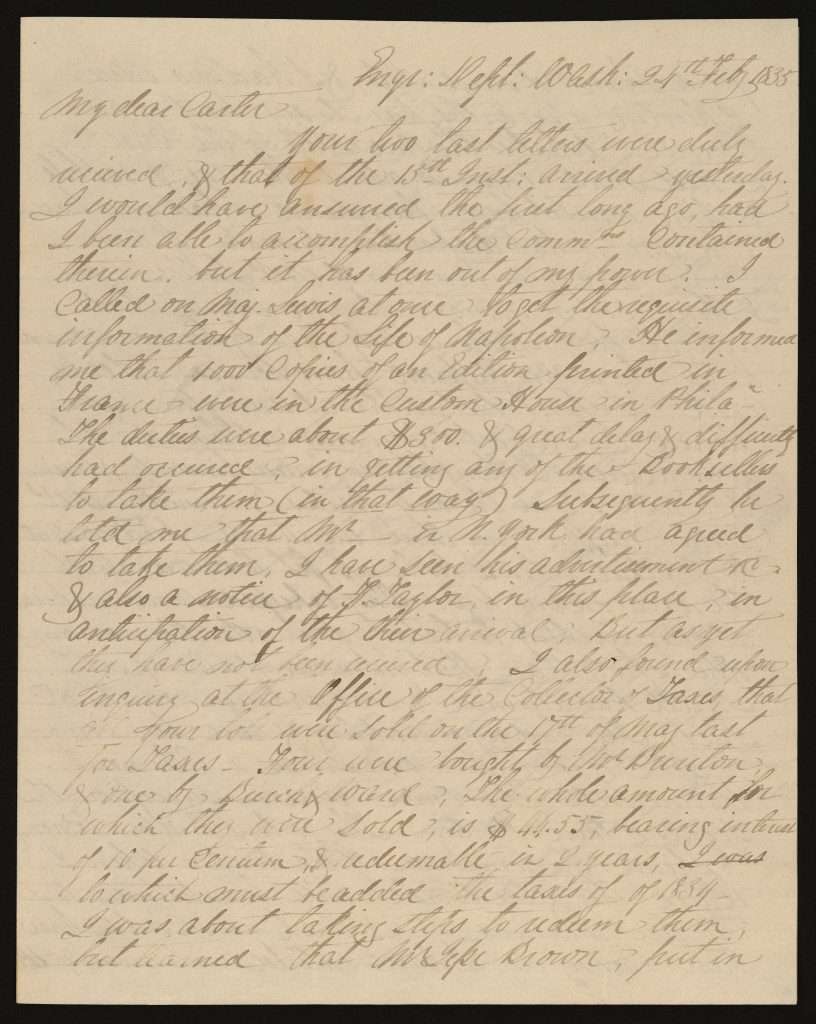 Your two last letters were duly received, & that of the 13th Inst; arrived yesterday. I would have answered the first long ago, had I been able to accomplish the Comm-ns contained therein, but it has been out of my power. I called on Maj. Lewis at once to get the requisite information of the Life of Napoleon. He informed me that 1000 copies of an Edition printed in France were in the Custom House in Phila-a The duties were about $300. & great delay & difficulty had occurred, in getting any of the Booksellers to take them (in that way) Subsequently he told me that Mr — in N. York had agreed to take them. I have seen his advertisement etc, & also a notice of [F]. Taylor, in this place, in anticipation of the then arrival. But as yet they have not been received. I also found upon inquiry at the Office of the Collector of Taxes, that all your lots were Sold on the 17th of May last for Taxes—Four were bought by Mr Dunton, & one by Burch & Ward. The whole amount for which they were Sold, is $44.55, bearing interest of 10 per centum, & redeemable in 2 years, to which must be added the taxes of 1834—I was about taking steps to redeem them, but learned that Mr Jesse Brown, put in 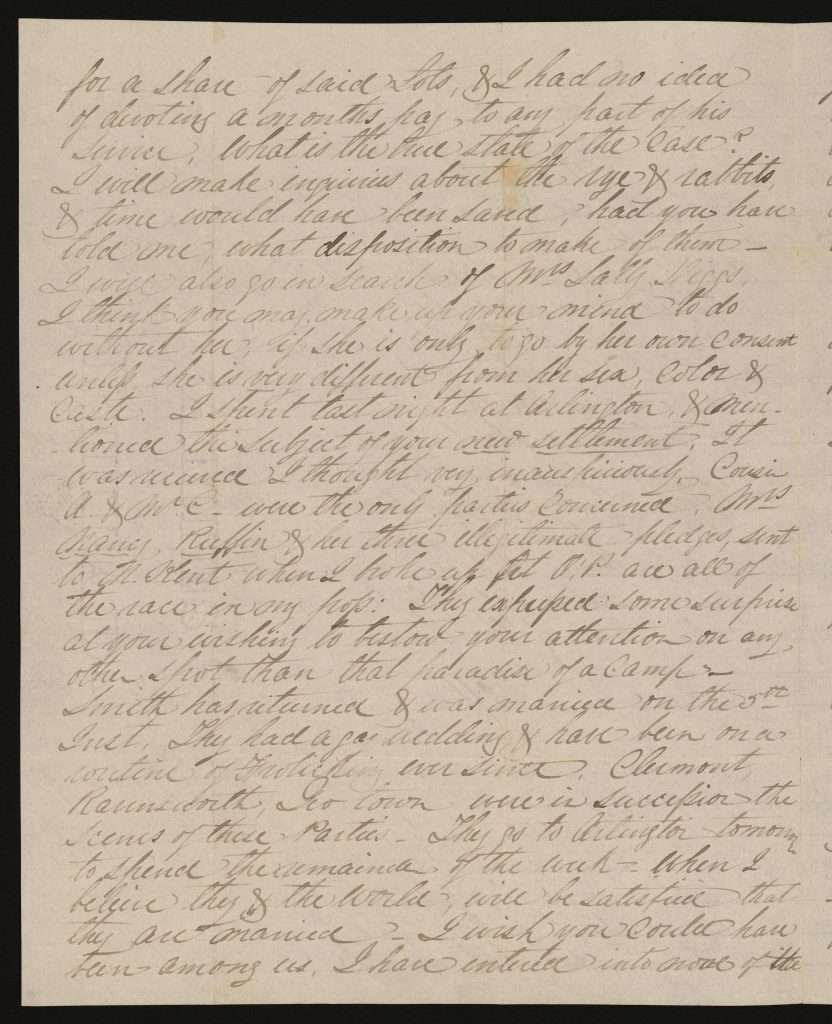 for a Share of said Lots, & I had no idea of devoting a months pay, to any part of his Service. What is the true State of the case? I will make inquiries about the rye & rabbits, & time would have been saved, had you have told me, what disposition to make of them—I will also go in search of Mrs. Sally Diggs, I think you may make up your mind to do without her, if she is only to go by her own consent unless she is very different from her sex, color & caste. I spent last night at Arlington, & mentioned the Subject of your new settlement. It was received I thought very inauspiciously. Cousin A. & Mr. C— were the only parties concerned. Mrs Nancy Ruffin & her three illegitimate pledges, sent to N. Kent when I broke up at Qrt O: P. are all of the race in my poss: They expressed some surprise at your wishing to bestow your attention on any other spot than that paradise of a Camp—Smith has returned & was married on the 5th Inst. They had a gay wedding & have been on a routine of Frolicking ever since. Clermont, Ravensworth, Geo town were in succession the Scenes of these Parties—They go to Arlington tomorrow to spend the remainder of the week—When I believe they & the World, will be satisfied that they are married—I wish you could have been among us. I have entered into none of the 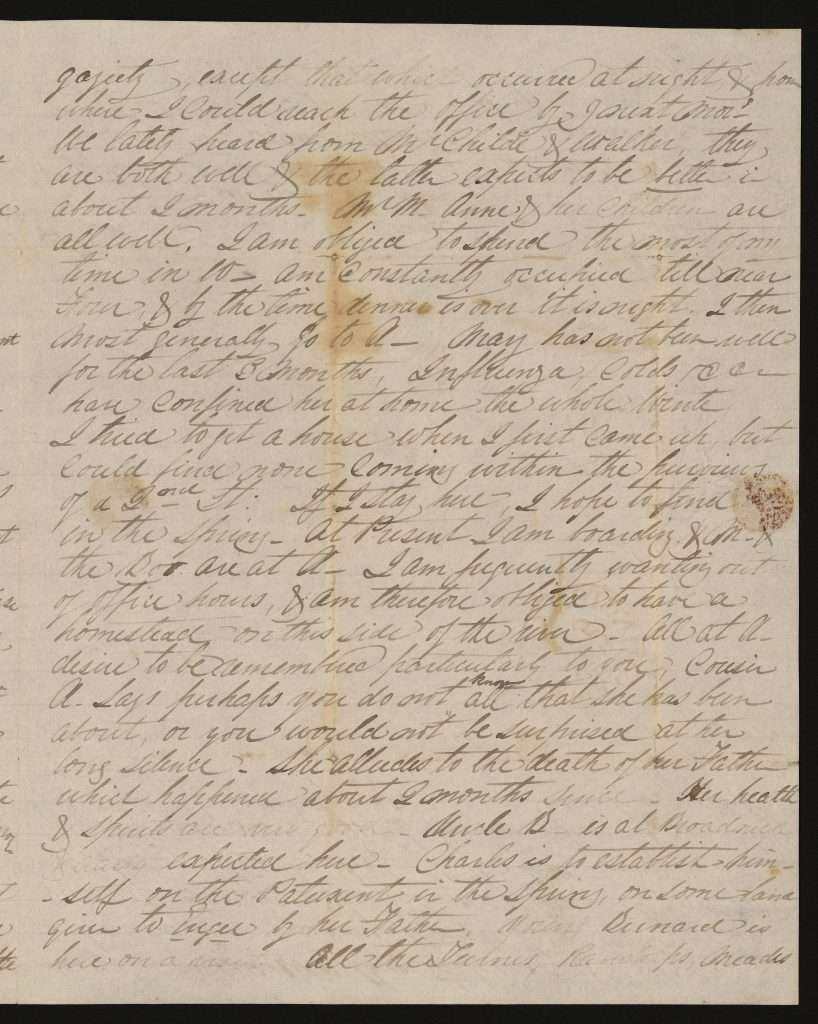 gayiety, except that which occurred at night & home where I could reach the Office by next mor-g We lately heard from Mr Childe & Walker, they are both well & the latter expects to be better in about 2 months—Mr M— Anne & her children are all well. I am obliged to spend the most of my time in W—am constantly occupied till near Four, & by the time dinner is over it is night. I then most generally go to A—Mary has not been well for the last 3 months, Influenza, Colds, etc have confined her at home the whole Winter, I tried to get a house when I first came up, but could fine none coming within the purviews of a 2nd Lt. If I stay here, I hope to find in the Spring—At Present I am boarding & M—& the Boo are at A—I am frequently wanting out of office hours, & am therefore obliged to have a homestead on this side of the river—All at A— desire to be remembered particularly to you, Cousin A— Says perhaps you do not know all that she has been about, or you would not be surprised at her long silence—She alludes to the death of her Father—which happened about 2 months since—Her health & spirits are very good – Uncle B is at Broadneck & daily expected here—Charles is to establish himself on the Patuxent in the Spring, on some land given to Eugee by her father. Young Bernard is here on a visit, All the Turnes, Randolphs, Meades etc have been at A— in the course of the Winter, Charles & Bena are still here, Mr & Mrs T— have returned—Cousin Anna is quite ashamed at some political address to which she saw your name attached—and says you have forgotten your old principles—Miss Emily Key was to have married to Geo—H— last week—I suppose you 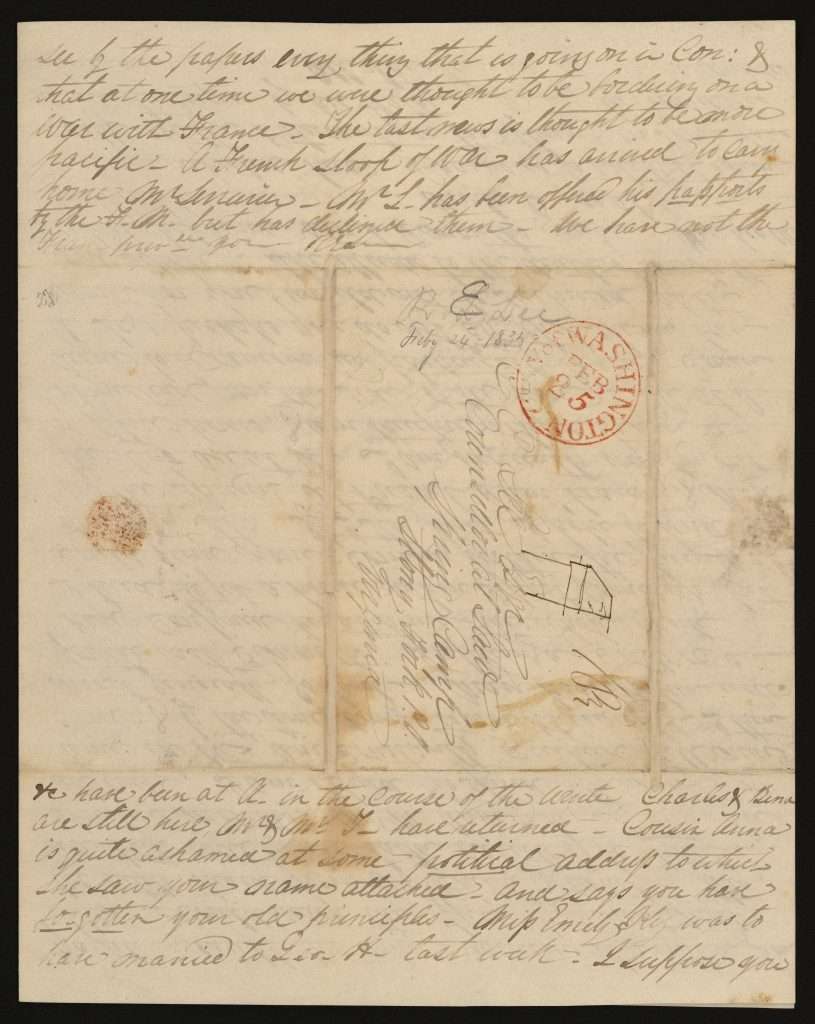 see by the papers every thing that is going on in Con: & that at one time we were thought to be bordering on a war with France—The last news is thought to be more pacific—A French Sloop of War has arrived to carry home Mr Lenarier—Mr L— has been offered his passports by the F— M— but has declined them—We have not the France priv-er