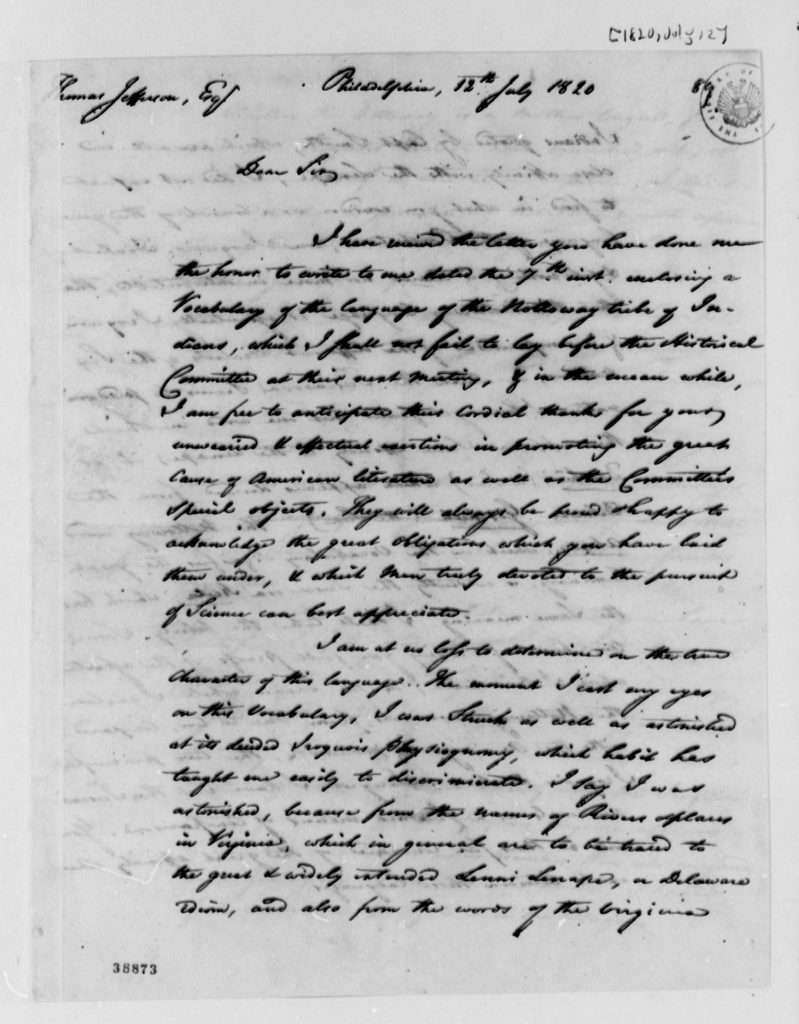 I have received the letter you have done me the honor to write to me dated the 7th inst. enclosing a Vocabulary of the language of the Nottoway tribe of Indians, which I shall not fail to lay before the Historical Committee at their next meeting, & in the mean while, I am free to anticipate their Cordial thanks for your unwearied & effectual exertions in promoting the great Cause of American literature as well as the Committee’s Special objects. They will always be proud & happy to acknowledge the great obligations which you have laid them under, & which men truly devoted to the pursuit of Science can but appreciate.

I am at no loss to determine on the true Character of this language. The moment I cast my eyes on this Vocabulary, I was Struck as well as astonished at its decided Iroquois Physiognomy, which habit has taught me easily to discriminate. I say I was astonished, because from the names of Rivers & places in Virginia, which in general are to be traced to the great & widely extended Lenni Lenape, or Delaware idiom, and also from the words of the Virginia 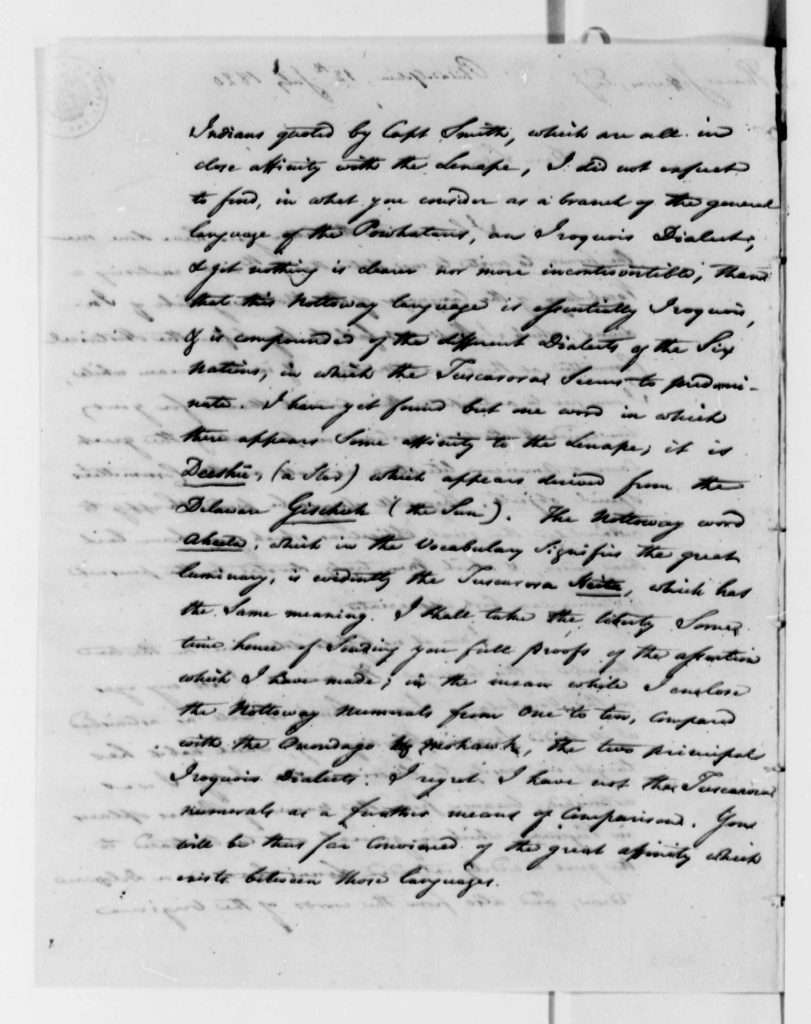 Indians quoted by Capt Smith, which are all in close affinity with the Lenape, I did not expect to find, in what you consider as a branch of the general language of the Powhatans, an Iroquois Dialect, & yet nothing is cleare[r] nor more incontrovertible, than that this Nottoway language is essentially Iroquois, & is compounded of the different Dialects of the Six Nations, in which the Tuscarora Seems to predominate. I have yet found but one word in which there appears Some affinity to the Lenape, it is Deeshu (a Star) which appears derived from the Delaware Gischur (the Sun). The Nottoway word Aheeta, which in the Vocabulary Signifies the great luminary, is evidently Tuscarora Heita, which has the Same meaning. I shall take the liberty Some time hence of Sending you full proofs of the assertion which I have made; in the mean while I enclose the Nottoway numerals from one to ten, compared with the Onandago & Mohawk, the two principal Iroquois Dialects. I regret I have not the Tuscarora numerals as a further means of Comparison. You will be thus far convinced of the great affinity which exists between those languages. 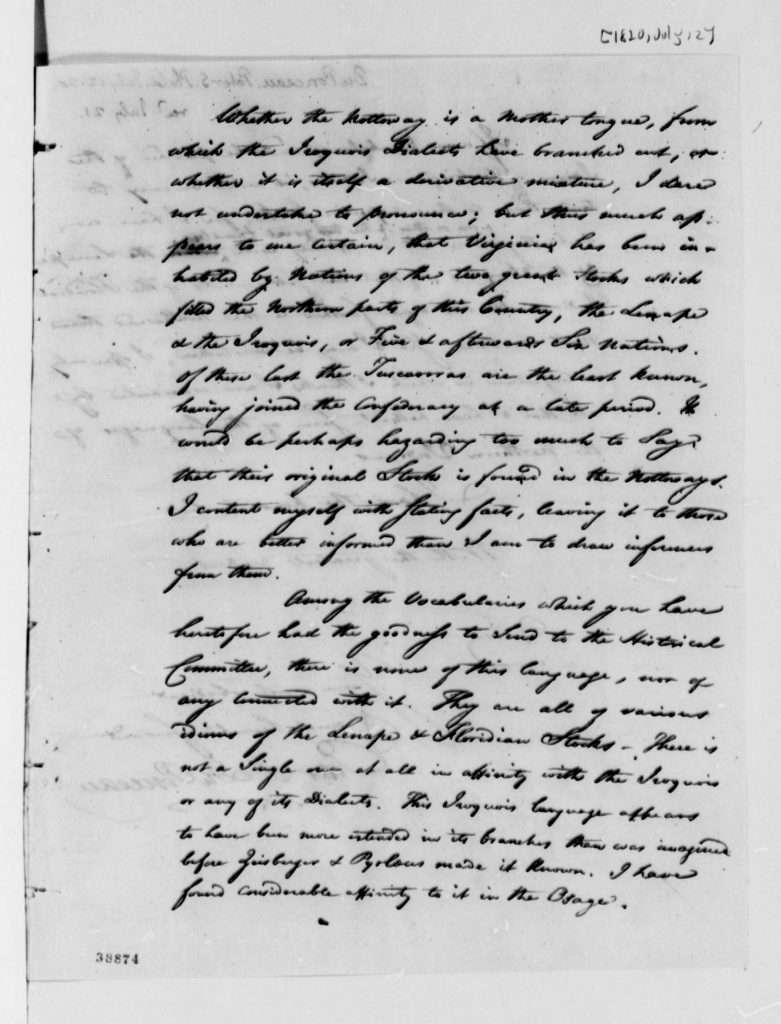 Whether the Nottoway is a mother tongue, from which the Iroquois Dialects have branched out, or whether it is itself a derivative mixture, I dare not undertake to pronounce, but this much appears to me certain, that Virginia has been inhabited by nations of the two great stocks which filled the Northern parts of this Country, the Lenape & the Iroquois, or Five and afterward Six nations. Of these last the Tuscarora are the least known, having joined the Confederacy at a late period. It would be perhaps hazarding too much to Say that their original Stock is found in the Nottoways. I content myself with Stating facts, leaving it to those who are better informed than I am to draw inferences from them.

Among the Vocabularies which you have heretofore had the goodness to send to the Historical committee, there is none of the language, nor of any connected with it. They are all various idioms of the Lenape & Floridian Stocks. There is not a Single one at all in affinity with the Iroquois or any of its Dialects. This Iroquois language appears to have been more extended in its branches than was imagined before Zeisberger & Pyrlous. I have found considerable affinity to it in the Osage. 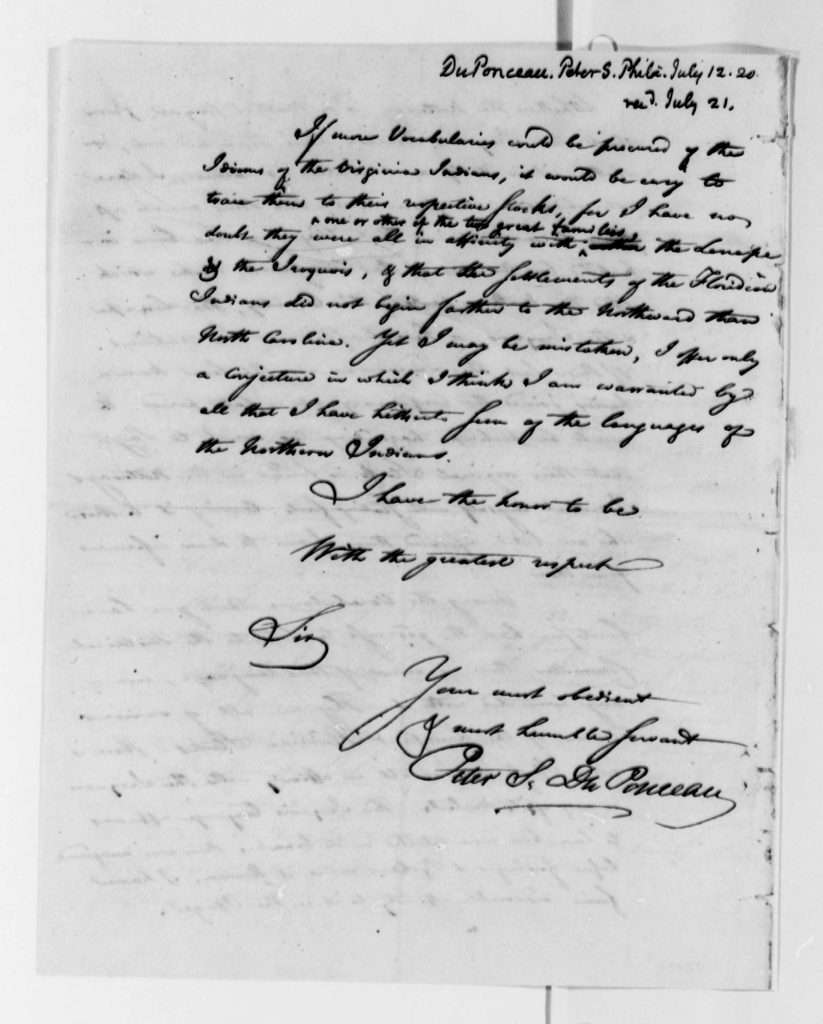 If more Vocabularies could be procured of the Idioms of the Virginia Indians, it would be easy to trace them to their respective stocks, for I have no doubt they were all in affinity with one or other of the two great families, the Lenape & the Iroquois, & that the Settlements of the Floridian Indians did not begin farther to the Northward than North Carolina. Yet I may be mistaken, I offer only a conjecture in which I think I am warranted by all that I have hitherto Seen of the languages of the Northern Indians.

I have the honor to be

With the greatest respect

Your most obedient & humble servant

“A Dictionarie of the Indian Language”; an excerpt from Historie and Travaile into Virginia Britannia by William Strachey (1612) The maner of their language”; an excerpt from “Map of Virginia. With a Description of the Countrey, the Commodities, People, Government and Religion” by John Smith (1612) Letter from Thomas Jefferson to Benjamin Smith Barton (1809) Letter (with Enclosure) from Peter S. DuPonceau to Thomas Jefferson (1820) “Nottoway Indians” from Gentleman’s Magazine (1821)