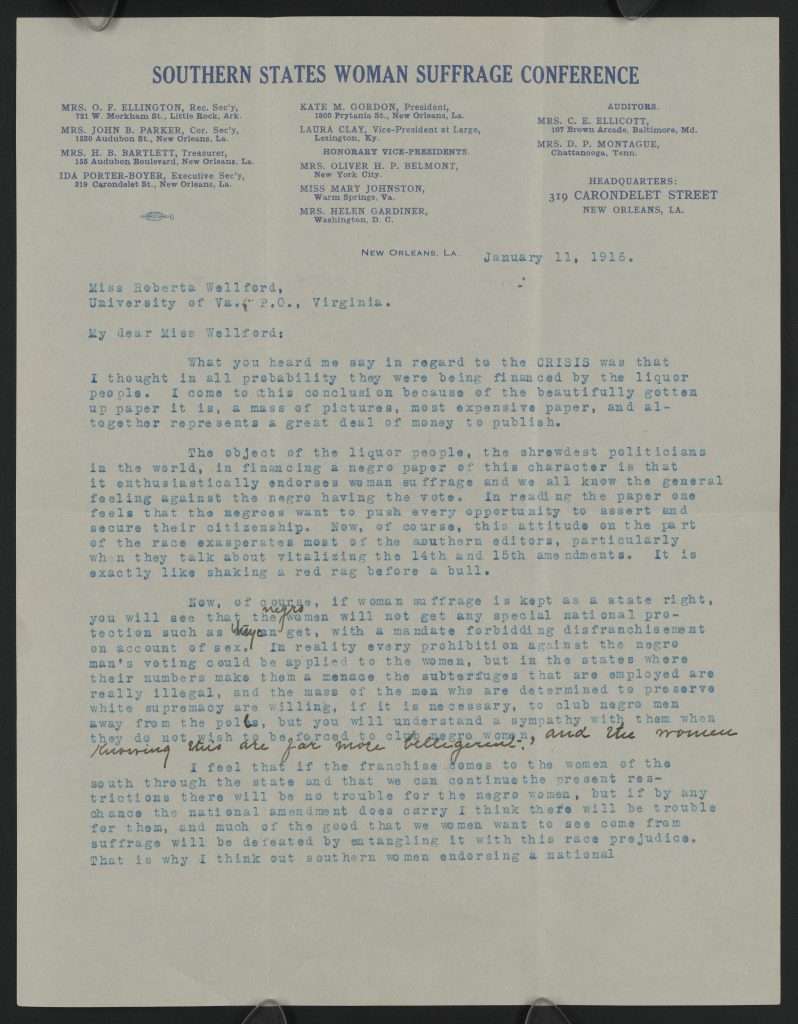 The Woman Suffrage Movement and Racism

What you heard me say in regard to the CRISIS was that I thought in all probability they were being financed by the liquor people. I come to this conclusion because of the beautifully gotten up paper it is, a mass of pictures, most expensive paper, and altogether represents a great deal of money to publish.

The object of the liquor people, the shrewdest politicians in the world, in financing a negro paper of this character is that it enthusiastically endorses woman suffrage and we all know the general feeling against the negro having the vote. In reading the paper one feels that the negroes want to push every opportunity to assert and secure their citizenship. Now, of course, this attitude on the part of the race exasperates most of the southern editors, particularly when they talk about vitalizing the 14th and 15th amendments. It is exactly like shaking a red rag before a bull.

Now, of course, if woman suffrage is kept as a state right, you will see that the negro women will not get any special national protection such as they can get, with a mandate forbidding disfranchisement on account of sex. In reality every prohibition against the negro man’s voting could be applied to the women, but in the states where their numbers make them a menace the subterfuges that are employed are really illegal, and the mass of the men who are determined to preserve white supremacy are willing, if it is necessary, to club negro men away from the polls, but you will understand a sympathy with them when they do not wish to be forced to club negro women, and the women hearing this are far more belligerent!

I feel that if the franchise comes to the women of the south through the state and that we can continue the present restrictions there will be no trouble for the negro women, but if by any chance the national amendment does carry I think there will be trouble for them, and much of the good that we women want to see come from suffrage will be defeated by entangling it with this race prejudice. That is why I think out southern women endorsing a national 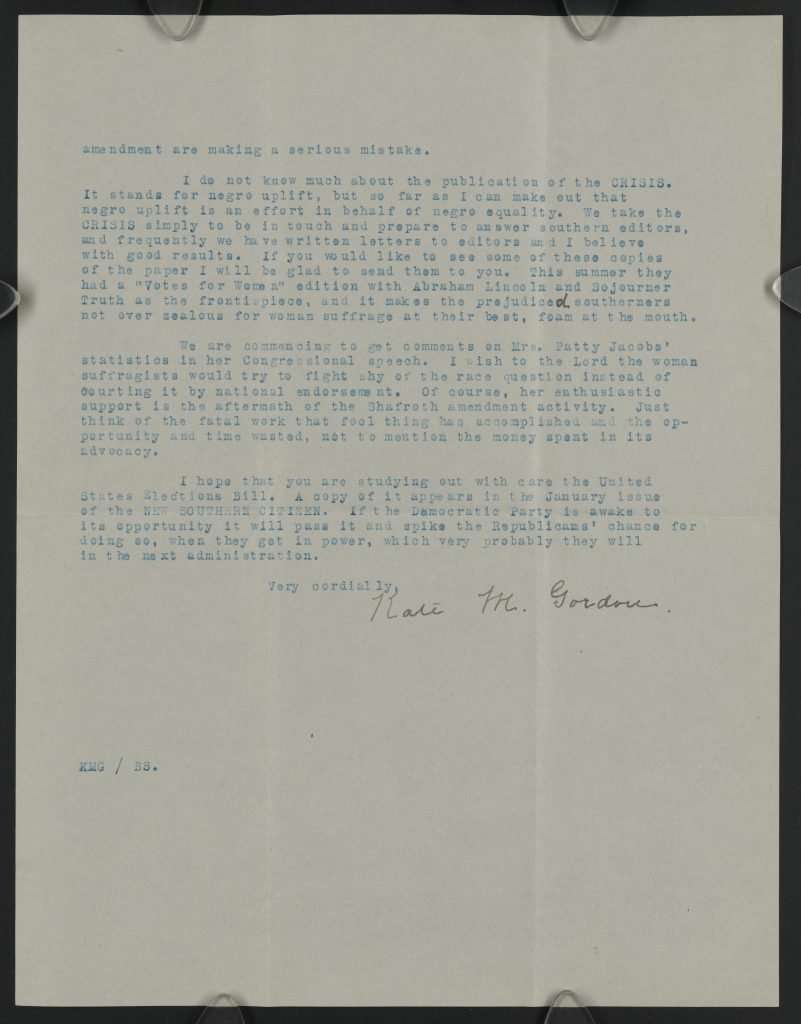 amendment are making a serious mistake.

I do not know much about the publication of the CRISIS. It stands for negro uplift, but so far as I can make out that negro uplift is an effort in behalf of negro equality. We take the CRISIS simply to be in touch and prepare to answer southern editors, and frequently we have written letters to editors and I believe with good results. If you would like to see some of these copies of the paper I will be glad to send them to you. This summer they had a “Votes for Women” edition with Abraham Lincoln and Sojourner Truth as the frontispiece, and it makes the prejudiced southerners not over zealous for woman suffrage at their best, foam at the mouth.

We are commencing to get comments on Mrs. Patty Jacobs’ statistics in her Congressional speech. I wish to the Lord the woman suffragists would try to fight shy of the race question instead of courting it by national endorsement. Of course, her enthusiastic support is the aftermath of the Shafroth amendment activity. Just think of the fatal work that fool thing has accomplished and the opportunity and time wasted, not to mention the money spent in its advocacy.

I hope that you are studying out with care the United States Elections Bill. A copy of it appears in the January issue of the NEW SOUTHERN CITIZEN. If the Democratic Party is awake to its opportunity it will pass it and spike the Republicans‘ chance for doing so, when they get in power, which very probably they will in the next administration.