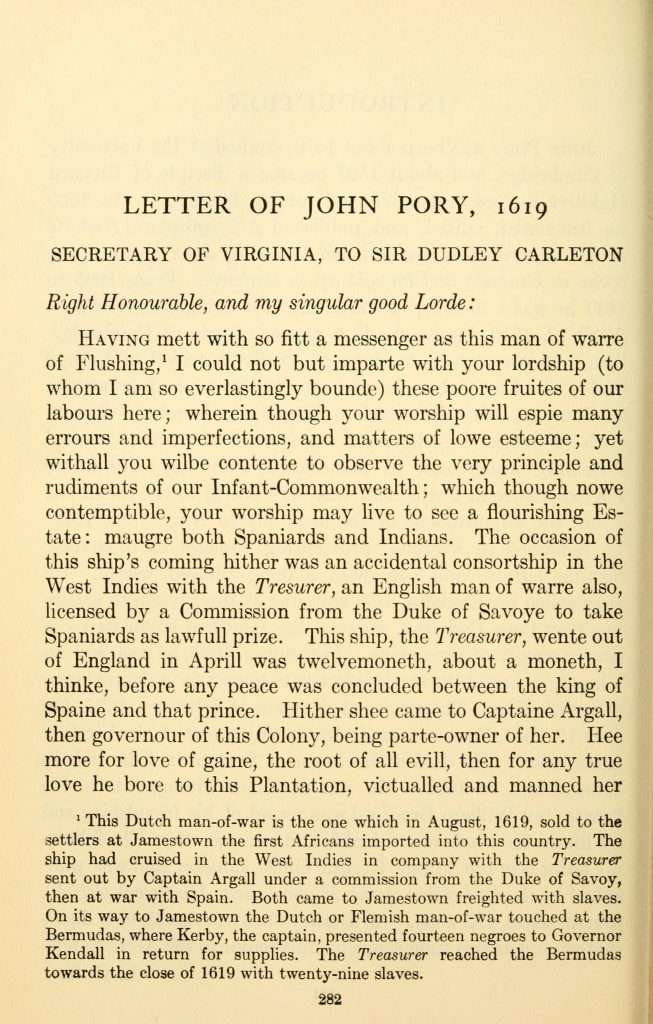 Having mett with so fitt a messenger as this man of warre of Flushing, I could not but imparte with your lordship (to whom I am so everlastingly bounde) these poore fruites of our labours here; wherein though your worship will espie many errours and imperfections, and matters of lowe esteeme; yet withall you wilbe contente to observe the very principle and rudiments of our Infant-Commonwealth; which though nowe contemptible, your worship may live to see a flourishing Estate: maugre both Spaniards and Indians. The occasion of this ship’s coming hither was an accidental consortship in the West Indies with the Tresurer, an English man of warre also, licensed by a Commission from the Duke of Savoye to take Spaniards as lawfull prize. This ship, the Treasurer, wente out of England in Aprill was twelvemoneth, about a moneth, I thinke, before any peace was concluded between the king of Spaine and that prince. Hither shee came to Captaine Argall, then governour of this Colony, being parte-owner of her. Hee more for love of gaine, the root of all evill, then for any true love he bore to this Plantation, victualled and manned her 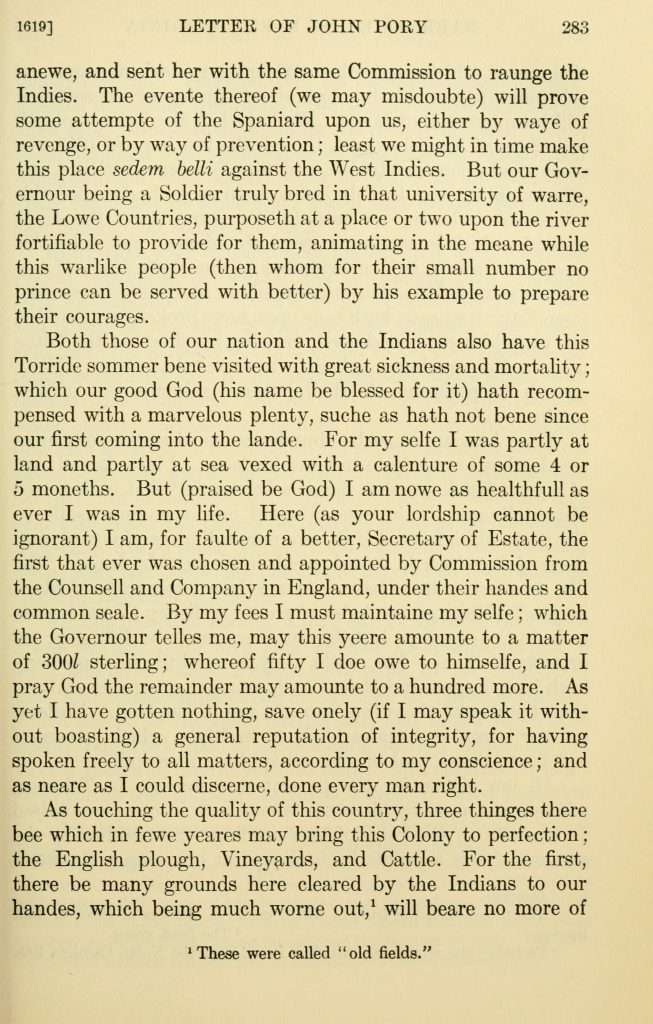 anewe, and sent her with the same Commission to raunge the Indies. The evente thereof (we may misdoubte) will prove some attempte of the Spaniard upon us, either by waye of revenge, or by way of prevention; least we might in time make this place sedem belli against the West Indies. But our Governour being a Soldier truly bred in that university of warre, the Lowe Countries, purposeth at a place or two upon the river fortifiable to provide for them, animating in the meane while this warlike people (then whom for their small number no prince can be served with better) by his example to prepare their courages.

Both those of our nation and the Indians also have this Torride sommer bene visited with great sickness and mortality; which our good God (his name be blessed for it) hath recompensed with a marvelous plenty, suche as hath not bene since our first coming into the lande. For my selfe I was partly at land and partly at sea vexed with a calenture of some 4 or 5 moneths. But (praised be God) I am nowe as healthfull as ever I was in my life. Here (as your lordship cannot be ignorant) I am, for faulte of a better, Secretary of Estate, the first that ever was chosen and appointed by Commission from the Counsell and Company in England, under their handes and common seale. By my fees I must maintaine my selfe; which the Governour telles me, may this yeere amounte to a matter of 300£ sterling; whereof fifty I doe owe to himselfe, and I pray God the remainder may amounte to a hundred more. As yet I have gotten nothing, save onely (if I may speak it without boasting) a general reputation of integrity, for having spoken freely to all matters, according to my conscience; and as neare as I could discerne, done every man right.

As touching the quality of this country, three thinges there bee which in fewe yeares may bring this Colony to perfection; the English plough, Vineyards, and Cattle. For the first, there be many grounds here cleared by the Indians to our handes, which being much worne out, will beare no more of 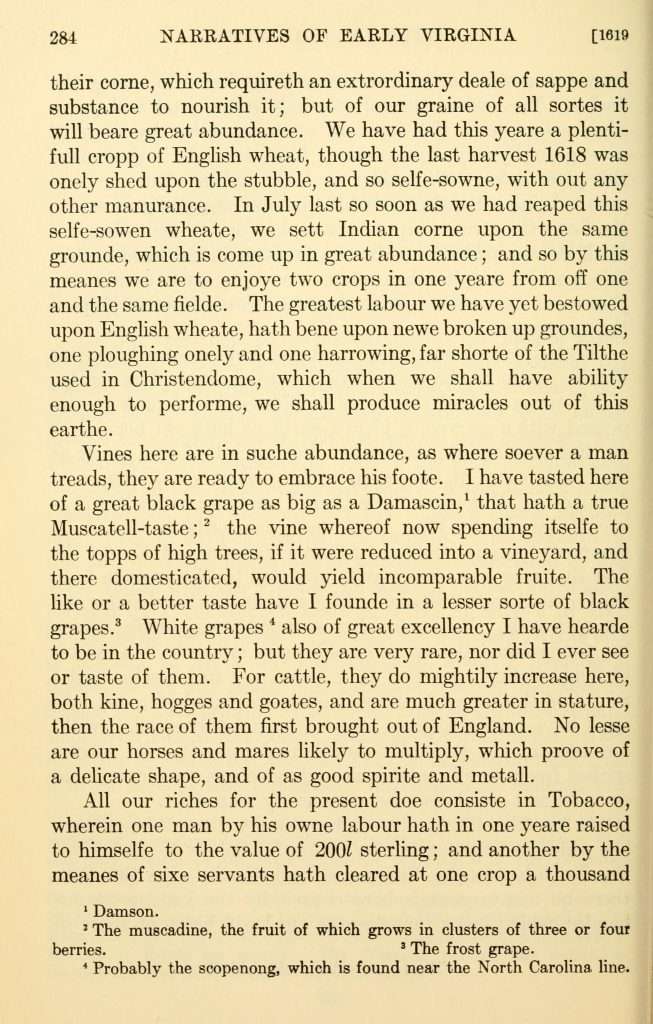 their corne, which requireth an extrordinary deale of sappe and substance to nourish it; but of our graine of all sortes it will beare great abundance. We have had this yeare a plentifull cropp of English wheat, though the last harvest 1618 was onely shed upon the stubble, and so selfe-sowne, with out any other manurance. In July last so soon as we had reaped this selfe-sowen wheate, we sett Indian corne upon the same grounde, which is come up in great abundance; and so by this meanes we are to enjoye two crops in one yeare from off one and the same fielde. The greatest labour we have yet bestowed upon English wheate, hath bene upon newe broken up groundes, one ploughing onely and one harrowing, far shorte of the Tilthe used in Christendome, which when we shall have ability enough to performe, we shall produce miracles out of this earthe.

Vines here are in suche abundance, as where soever a man treads, they are ready to embrace his foote. I have tasted here of a great black grape as big as a Damascin, that hath a true Muscatell-taste; the vine whereof now spending itselfe to the topps of high trees, if it were reduced into a vineyard, and there domesticated, would yield incomparable fruite. The like or a better taste have I founde in a lesser sorte of black grapes. White grapes also of great excellency I have hearde to be in the country; but they are very rare, nor did I ever see or taste of them. For cattle, they do mightily increase here, both kine, hogges and goates, and are much greater in stature, then the race of them first brought out of England. No lesse are our horses and mares likely to multiply, which proove of a delicate shape, and of as good spirite and metall.

All our riches for the present doe consiste in Tobacco, wherein one man by his owne labour hath in one yeare raised to himselfe to the value of 200£ sterling; and another by the meanes of sixe servants hath cleared at one crop a thousand 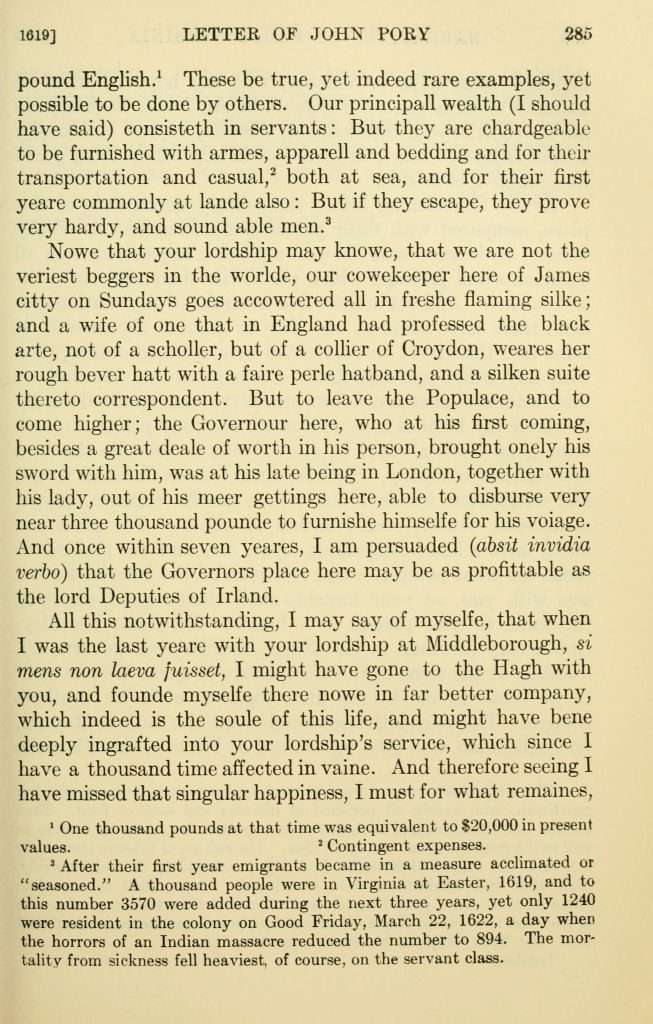 pound English. These be true, yet indeed rare examples, yet possible to be done by others. Our principall wealth (I should have said) consisteth in servants: But they are chardgeable to be furnished with armes, apparell and bedding and for their transportation and casual, both at sea, and for their first yeare commonly at lande also: But if they escape, they prove very hardy, and sound able men.

Nowe that your lordship may knowe, that we are not the veriest beggers in the worlde, our cowekeeper here of James citty on Sundays goes accowtered all in freshe flaming silke; and a wife of one that in England had professed the black arte, not of a scholler, but of a collier of Croydon, weares her rough bever hatt with a faire perle hatband, and a silken suite thereto correspondent. But to leave the Populace, and to come higher; the Governour here, who at his first coming, besides a great deale of worth in his person, brought onely his sword with him, was at his late being in London, together with his lady, out of his meer gettings here, able to disburse very near three thousand pounde to furnishe himselfe for his voiage. And once within seven yeares, I am persuaded (absit invidia verbo) that the Governors place here may be as profittable as the lord Deputies of Irland.

All this notwithstanding, I may say of myselfe, that when I was the last yeare with your lordship at Middleborough, si mens non laeva fuisset, I might have gone to the Hagh with you, and founde myselfe there nowe in far better company, which indeed is the soule of this life, and might have bene deeply ingrafted into your lordship’s service, which since I have a thousand time affected in vaine. And therefore seeing I have missed that singular happiness, I must for what remaines, 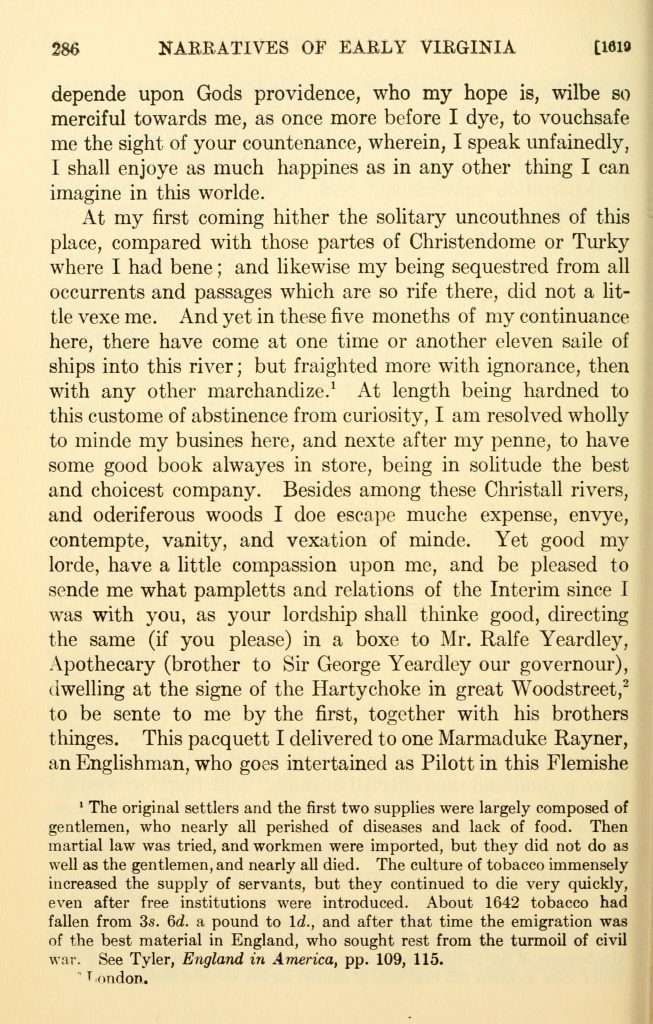 depende upon Gods providence, who my hope is, wilbe so merciful towards me, as once more before I dye, to vouchsafe me the sight of your countenance, wherein, I speak unfainedly, I shall enjoye as much happines as in any other thing I can imagine in this worlde.

At my first coming hither the solitary uncouthnes of this place, compared with those partes of Christendome or Turky where I had bene; and likewise my being sequestred from all occurrents and passages which are so rife there, did not a little vexe me. And yet in these five moneths of my continuance here, there have come at one time or another eleven saile of ships into this river; but fraighted more with ignorance, then with any other marchandize. At length being hardned to this custome of abstinence from curiosity, I am resolved wholly to minde my busines here, and nexte after my penne, to have some good book alwayes in store, being in solitude the best and choicest company. Besides among these Christall rivers, and oderiferous woods I doe escape muche expense, envye, contempte, vanity, and vexation of minde. Yet good my lorde, have a little compassion upon me, and be pleased to sende me what pampletts and relations of the Interim since I was with you, as your lordship shall thinke good, directing the same (if you please) in a boxe to Mr. Ralfe Yeardley, Apothecary (brother to Sir George Yeardley our governour), dwelling at the signe of the Hartychoke in great Woodstreet, to be sente to me by the first, together with his brothers thinges. This pacquett I delivered to one Marmaduke Rayner, an Englishman, who goes intertained as Pilott in this Flemishe 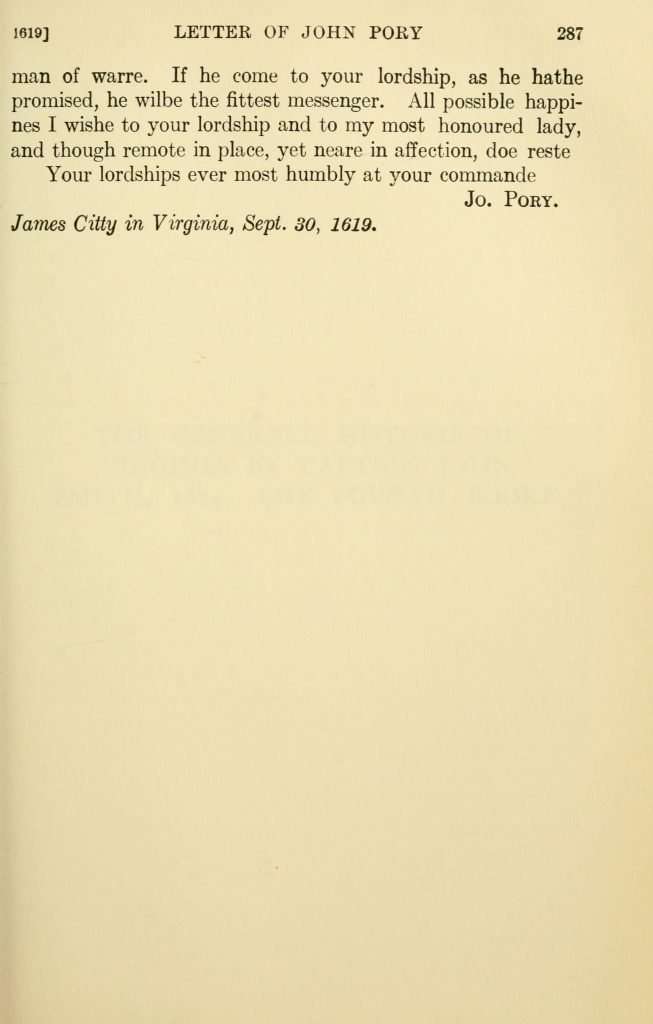 man of warre. If he come to your lordship, as he hathe promised, he wilbe the fittest messenger. All possible happines I wishe to your lordship and to my most honoured lady, and though remote in place, yet neare in affection, doe reste

Your lordships ever most humbly at your commande