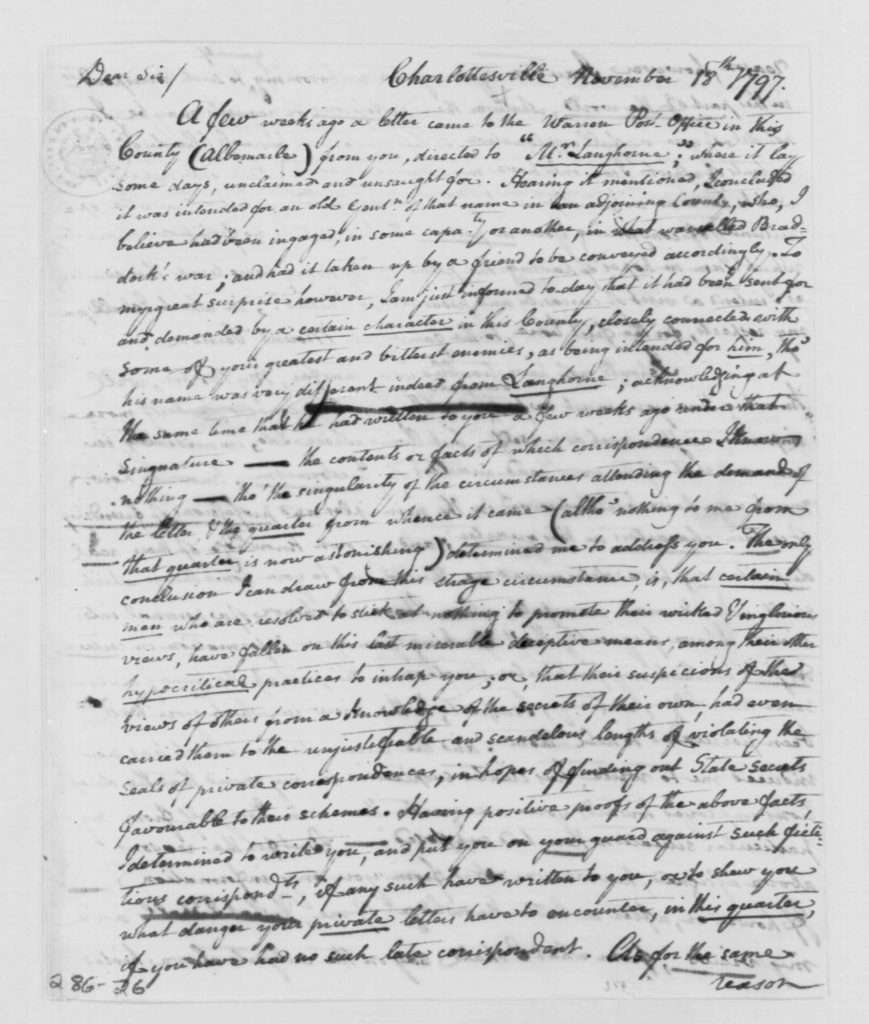 A few weeks ago a letter came to the Warren Post-Office in this County (Albemarle) from you, directed to “Mr Langhorne”; where it lay some days, unclaimed and unsaught for. Hearing it mentioned, I concluded it was intended for an old Gentn of that name in an adjoining County, who, I believe had been ingaged, in some capa[ci]ty or another, in what was called Braddock’s war; and had it taken up by a friend to be conveyed accordingly. To my great surprise however, I am just informed to-day that it had been sent for and demanded by a certain character in this County, closely connected with some of your greatest and bitterst enemies, as being intended for him, tho’ his name was very different indeed from Langhorne; acknowledging at the same time that he had written to you a few weeks ago under that Signature—the contents or facts of which corrispondence I knew nothing—tho’ the singularity of the circumstances attending the demand of the letter, & the quarter from whence it came (altho’ nothing to me from that quarter is now astonishing) determined me to address you. The only conclusion I can draw from this stra[n]ge circumstance, is, that certain men who are resolved to stick at nothing to promote their wicked & inglorious views, have fallen on this last miserable deceptive means, among their other hypocritical practices to intrap you; or, that their suspicions of the views of others from a knowledge of the secrets of their own, had even carried them to the unjustifiable and scandalous lengths of violating the Seals of private correspondences, in hopes of finding out State secrets favourable to their schemes. Having positive proofs of the above facts, I determined to write you, and put you on your guard against such fictitious corrispondts, if any such have written to you, or to shew you what danger your private letters have to encounter, in this quarter, if you have had no such late corrispondent. As for the same 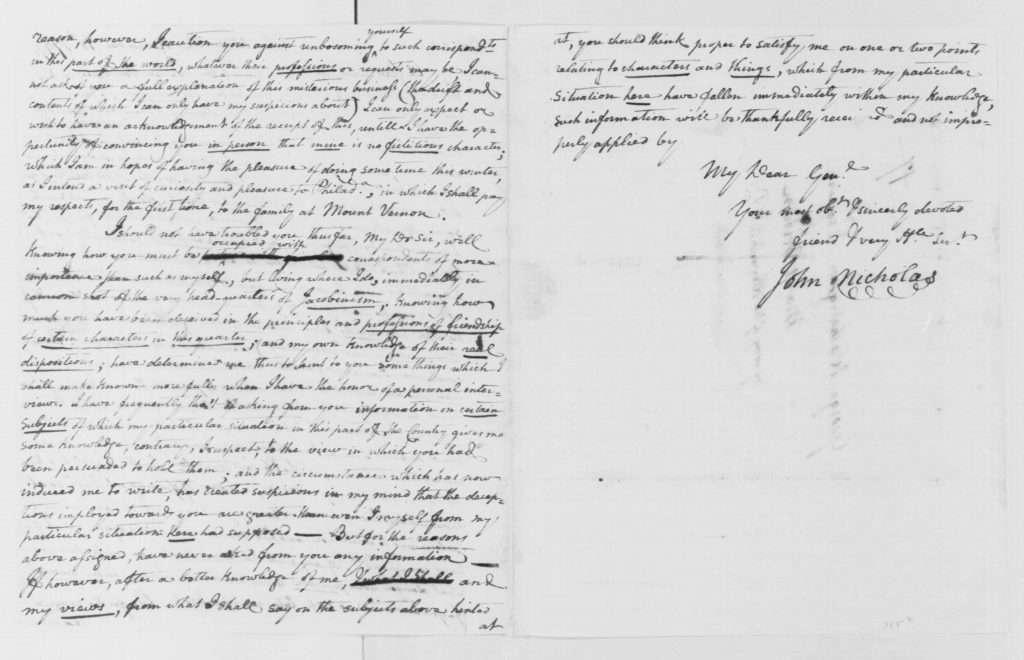 reason, however, I caution you against unbosoming yourself to such corrispondts in this part of the world, whatever their professions or requests may be, I cannot ask of you a full explanation of this misterious business (the drift and contents of which I can only have my suspicions about) I can only expect or wish to have an acknowledgement of the receipt of this, untill I have the oppertunity of convincing you in person that mine is no fictitious character; which I am in hopes of having the pleasure of doing some time this winter, as I intend a visit of curiosity and pleasure to Philada, in which I shall pay my respects, for the first time, to the family at Mount Vernon.

I should not have troubled you thus far, My Dr Sir, well knowing how you must be occupied with correspondents of more importance than such as myself, but living where I do, immediately in cannon shot of the very head-quarters of Jacobinism; knowing how much you have been deceived in the principles and professions of friendship of certain characters in this quarter, and my own knowledge of their real dispositions; have determined me thus to hint to you some things which I shall make known more fully when I have the honor of a personal interview. I have frequently tho’t of asking from you information on certain Subjects of which my particular situation in this part of the Country gives me some knowledge, contrary, I suspect, to the view in which you had been persuaded to hold them; and the circumstance which has now induced me to write, has created suspicions in my mind that the deceptions imployed towards you are greater than even I myself from my particular situation here had supposed—But for the reasons above assigned, have never asked from you any information—If however, after a better knowledge of me, and my views, from what I shall say on the subjects above hinted at, you should think proper to satisfy me on one or two points relating to characters and things, which from my particular Situation here have fallen immediately within my knowledge, such information will be thankfully received and not improperly applied by My Dear Genl Your most obt & sincerly devoted friend & very Hle Sert

RELATED CONTENT
Categories:
Type:
MAP
TIMELINE
November 18, 1797
John Nicholas (ca. 1758-1836) writes to George Washington in regard to the former president's correspondence with a man named John Langhorne. Langhorne was actually a pseudonym employed by Peter Carr, nephew of Thomas Jefferson, in the hope of provoking an imprudent response from Washington.
FURTHER READING