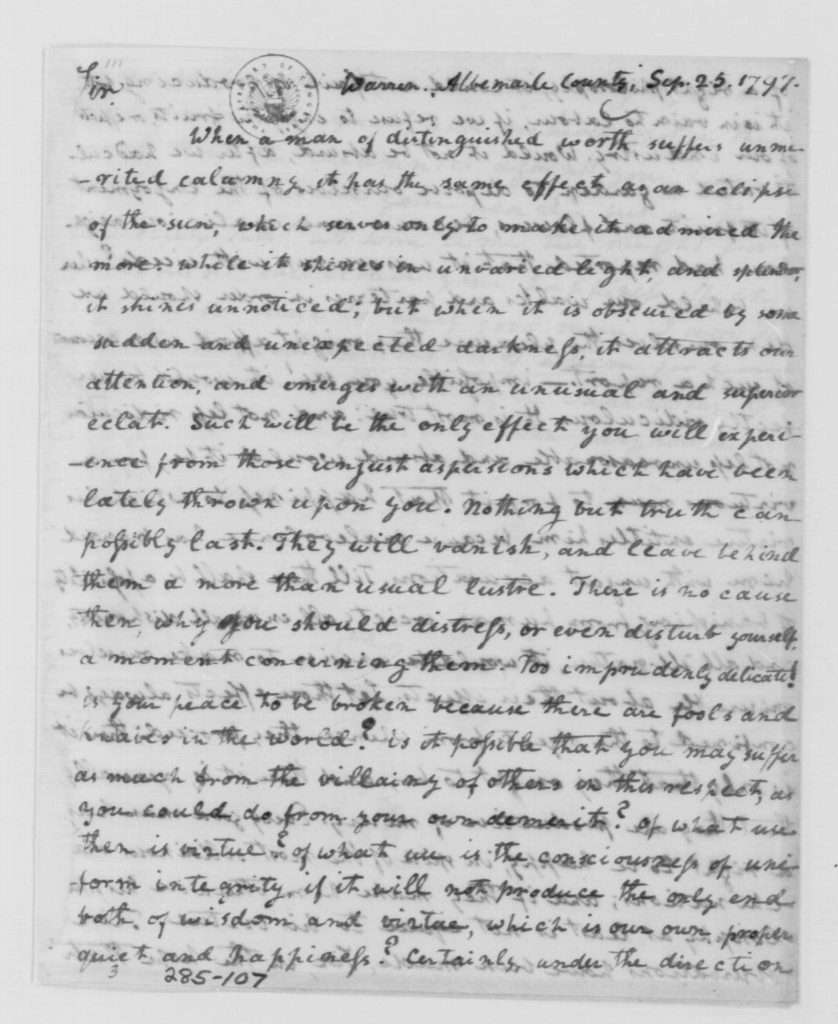 When a man of distinguished worth suffers unmerited calumny, it has the same effect as an eclipse of the sun, which serves only to make it admired the more. While it shines in unvaried light, and splendor, it shines unnoticed; but when it is obscured by some sudden and unexpected darkness, it attracts our attention, and emerges with an unusual and superior eclat. Such will be the only effect you will experience from those unjust aspersions which have been lately thrown upon you. Nothing but truth can possibly last. They will vanish, and leave behind them a more than usual lustre. There is no cause then, why you should distress, or even disturb yourself a moment concerning them. Too impruden[t]ly delicate! is your peace to be broken because there are fools and knaves in the world? is it possible that you may suffer as much from the villainy of others in this respect, as you could do from your own demerit? of what use then is virtue? of what use is the consciousness of uniform integrity, if it will not produce the only end both of wisdom and virtue, which is our own proper quiet and happiness? Certainly, under the direction 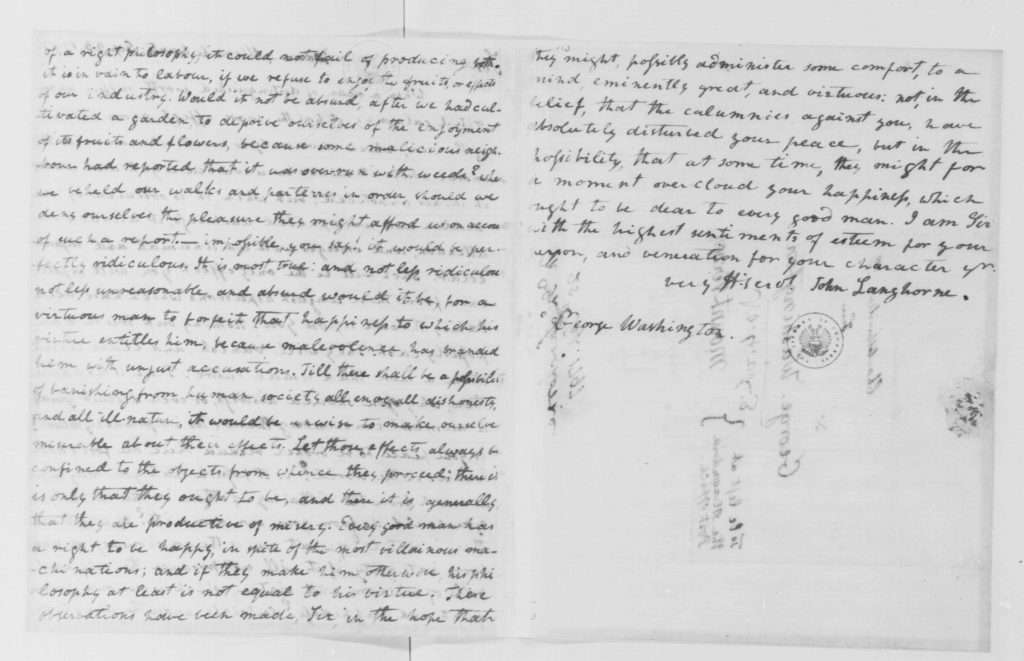 of a right philosophy, it could not fail of producing both. it is in vain to labour, if we refuse to enjoy the fruits, or effects of our industry. Would it not be absurd, after we had cultivated a garden, to deprive ourselves of the enjoyment of its fruits and flowers, because some malicious neighbour had reported that it was over-run with weeds? when we beheld our walks and parterres in order, should we deny ourselves the pleasure they might afford us on account of such a report, impossible, you say! it would be perfectly ridiculous. It is most true: and not less ridiculous, not less unreasonable and absurd would it be, for a virtuous man to forfeit that happiness to which his virtue entitles him, because malevolence has branded him with unjust accusations. Till there shall be a possibility of banishing from human society all envy, all dishonesty, and all ill-nature, it would be unwise to make ourselves miserable about their effects. Let those effects always be confined to the objects from whence they proceed; there it is only that they ought to be, and there it is, generally, that they are productive of misery. Every good man has a right to be happy, in spite of the most villainous machinations; and if they make him otherwise, his philosophy at least is not equal to his virtue. These observations have been made, Sir, in the hope that they might possibly administer some comfort, to a mind, eminently great, and virtuous: not, in the belief, that the calumnies against you, have absolutely disturbed your peace, but in the possibility, that at some time, they might for a moment over-cloud your happiness, which ought to be dear to every good man. I am Sir with the highest sentiments of esteem for your person, and veneration for your character yr very H: servt

RELATED CONTENT
Categories:
Type:
MAP
TIMELINE
September 25, 1797
Peter Carr writes a letter to George Washington under the pseudonym John Langhorne. The letter, written with the goal of eliciting an indiscreet response from the former president, commiserates with Washington on alleged calumnies directed at him in his retirement.
FURTHER READING