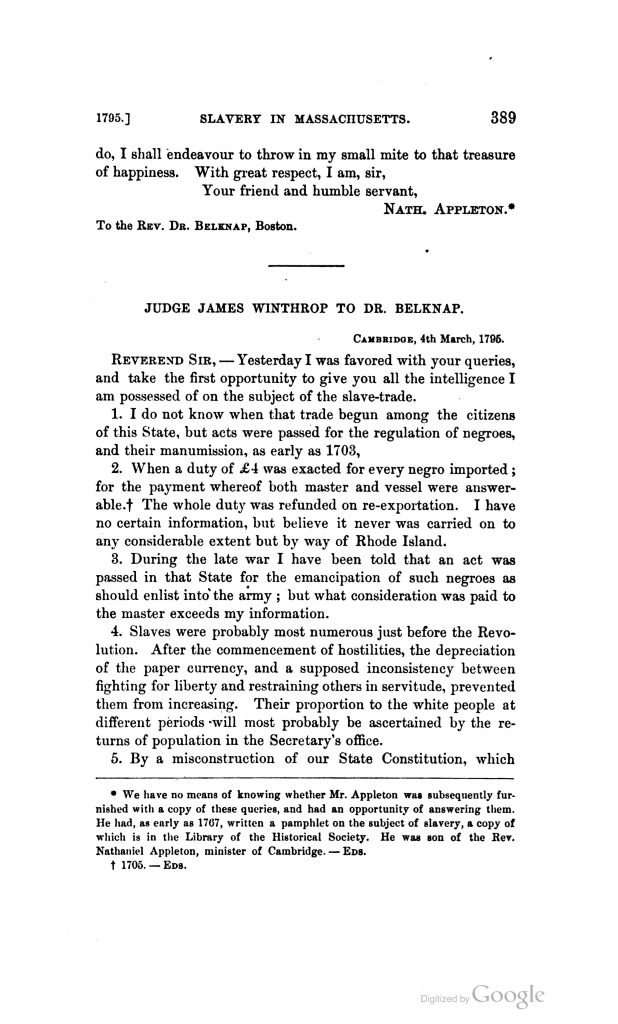 Reverend Sir,—Yesterday I was favored with your queries, and take the first opportunity to give you all the intelligence I am possessed of on the subject of the slave-trade.

1. I do not know when that trade begun among the citizens of this State, but acts were passed for the regulation of negroes, and their manumission, as early as 1703,

2. When a duty of £4 was exacted for every negro imported; for the payment whereof both master and vessel were answerable.† The whole duty was refunded on re-exportation. I have no certain information, but believe it never was carried on to any considerable extent but by way of Rhode Island.

3. During the late war I have been told that an act was passed in that State for the emancipation of such negroes as should enlist into the army; but what consideration was paid to the master exceeds my information.

4. Slaves were probably most numerous just before the Revolution. After the commencement of hostilities, the depreciation of the paper currency, and a supposed inconsistency between fighting for liberty and restraining others in servitude, prevented them from increasing. Their proportion to the white people at different periods will probably be ascertained by the returns of population in the Secretary’s office.

5. By a misconstruction of our State Constitution, which 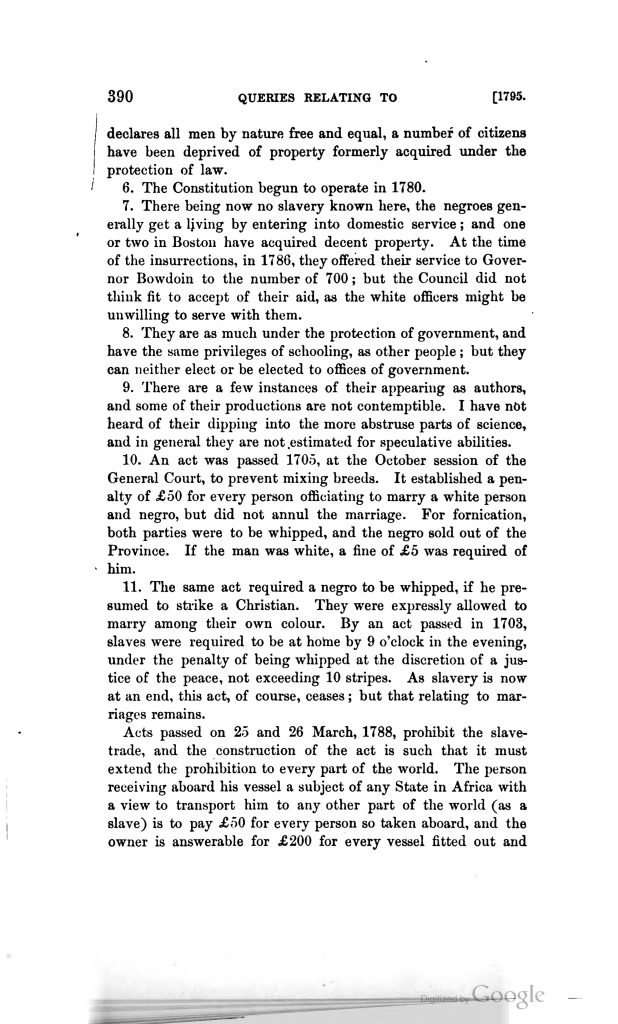 declares all men by nature free and equal, a number of citizens have been deprived of property formerly acquired under the protection of law.

7. There being now no slavery known here, the negroes generally get a living by entering into domestic service; and one or two in Boston have acquired decent property. At the time of the insurrections, in 1786, they offered their service to Governor Bowdoin to the number of 700; but the Council did not think fit to accept of their aid, as the white officers might be unwilling to serve with them.

8. They are as much under the protection of government, and have the same privileges of schooling, as other people; but they can neither elect or be elected to offices of government.

9. There are a few instances of their appearing as authors, and some of their productions are not contemptible. I have not heard of their dipping into the more abstruse parts of science, an din general they are not estimated for speculative abilities.

10. An act was passed 1705, at the October session of the General Court, to prevent mixing breeds. It established a penalty of £50 for every person officiating to marry a white person and negro, but did not annul the marriage. For fornication, both parties were to be whipped, and the negro sold out of the Province. If the man was white, a fine of £5 was required of him.

11. The same act required a negro to be whipped, if he presumed to strike a Christian. They were expressly allowed to marry among their own colour. By an act passed in 1703, slaves were required to be at home by 9 o’clock in the evening, under the penalty of being whipped at the discretion of a justice of the peace, not exceeding 10 stripes. As slavery is now at an end, this act, of course, ceases; but that relating to marriages remains.

Acts passed on 25 and 26 March, 1788, prohibit the slave-trade, and the construction of the act is such that it must extend the prohibition to every part of the world. The person receiving aboard his vessel a subject of any State in Africa with a view to transport him to any other part of the world (as a slave) is to pay £50 for every person so taken aboard, and the owner is answerable for £200 for every vessel fitted out and 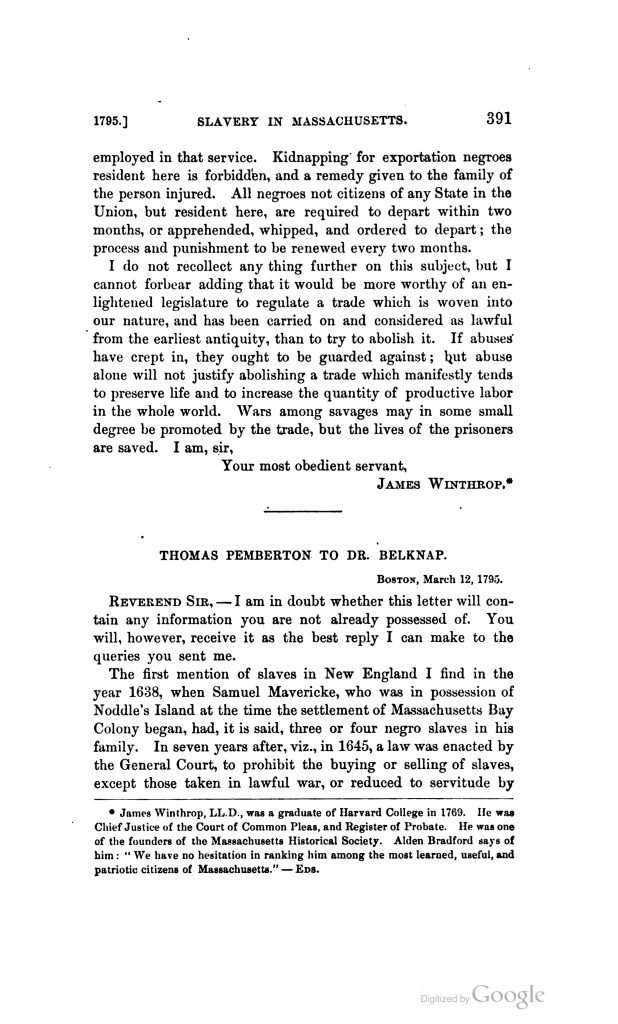 employed in that service. Kidnapping for exportation negroes resident here is forbidden, and a remedy given tot eh family of the person injured. All negroes not citizens of any State in the Union, but resident here, are required to depart within two months, or apprehended, whipped, and ordered to depart; the process and punishment to be renewed every two months.

I do not recollect any thing further on this subject, but I cannot forbear adding that it would be more worthy of an enlightened legislature to regulate a trade which is woven into our nature, and has been carried on and considered as lawful from the earliest antiquity, than to try to abolish it. If abuses have crept in, they ought to be guarded against; but abuse alone will not justify abolishing a trade which manifestly tends to preserve life and to increase the quantity of productive labor in the whole world. Wars among savages may in some small degree be promoted by the trade, but the lives of the prisoners are saved. I am, sir,

Your most obedient servant,

* James Winthrop, LL.D. was a graduate of Harvard College in 1769. He was Chief Justice of the Court of Common Pleas, and Register of Probate. He was one of the founders of the Massachusetts Historical Society. Alden Bradford says of him: “We have no hesitation in ranking him among the most learned, useful, and patriotic citizens of Massachusetts.”—Eds.