Skip to content
Author: Howell CobbTranscription Source: The War of the Rebellion: A Compilation of the Official Records of the Union and Confederate Armies (Washington, D.C.: Government Printing Office, 1900), series 4, vol. 3, 1,009–1,010.
FULL TEXT 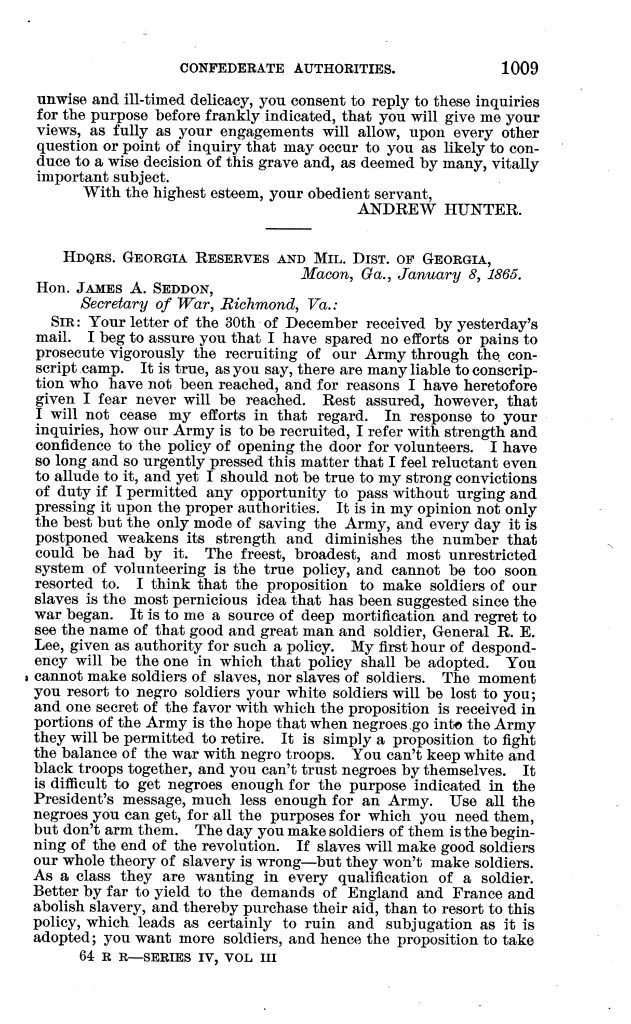 Sir: Your letter of the 30th of December received by yesterdays mail. I beg to assure you that I have spared no efforts or pains to prosecute vigorously the recruiting of our Army through the, conscript camp. It is true, as you say, there are many liable to conscription who have not been reached, and for reasons I have heretofore given I fear never will be reached. Rest assured, however, that I will not cease my efforts in that regard. In response to your inquiries, how our Army is to be recruited, I refer with strength and confidence to the policy of opening the door for volunteers. I have so long and so urgently pressed this matter that I feel reluctant even to allude to it, and yet I should not be true to my strong convictions of duty if I permitted any opportunity to pass without urging and pressing it upon the proper authorities. It is in my opinion not only the best but the only mode of saving the Army, and every day it is postponed weakens its strength and diminishes the number that could be had by it. The freest, broadest, and most unrestricted system of volunteering is the true policy, and cannot be too soon resorted to. I think that the proposition to make soldiers of our slaves is the most pernicious idea that has been suggested since the war began. It is to me a source of deep mortification and regret to see the name of that good and great man and soldier, General R. E. Lee, given as authority for such a policy. My first hour of despondency will be the one in which that policy shall be adopted. You cannot make soldiers of slaves, nor slaves of soldiers. The moment you resort to negro soldiers your white soldiers will be lost to you; and one secret of the favor with which the proposition is received in portions of the Army is the hope that when negroes go into the Army they will be permitted to retire. It is simply a proposition to fight the balance of the war with negro troops. You can’t keep white and black troops together, and you can’t trust negroes by themselves. It is difficult to get negroes enough for the purpose indicated in the President‘s message, much less enough for an Army. Use all the negroes you can get, for all the purposes for which you need them, but don’t arm them. The day you make soldiers of them is the beginning of the end of the revolution. If slaves will make good soldiers our whole theory of slavery is wrong but they won’t make soldiers. As a class they are wanting in every qualification of a soldier. Better by far to yield to the demands of England and France and abolish slavery, and thereby purchase their aid, than to resort to this policy, which leads as certainly to ruin and subjugation as it is adopted; you want more soldiers, and hence the proposition to take 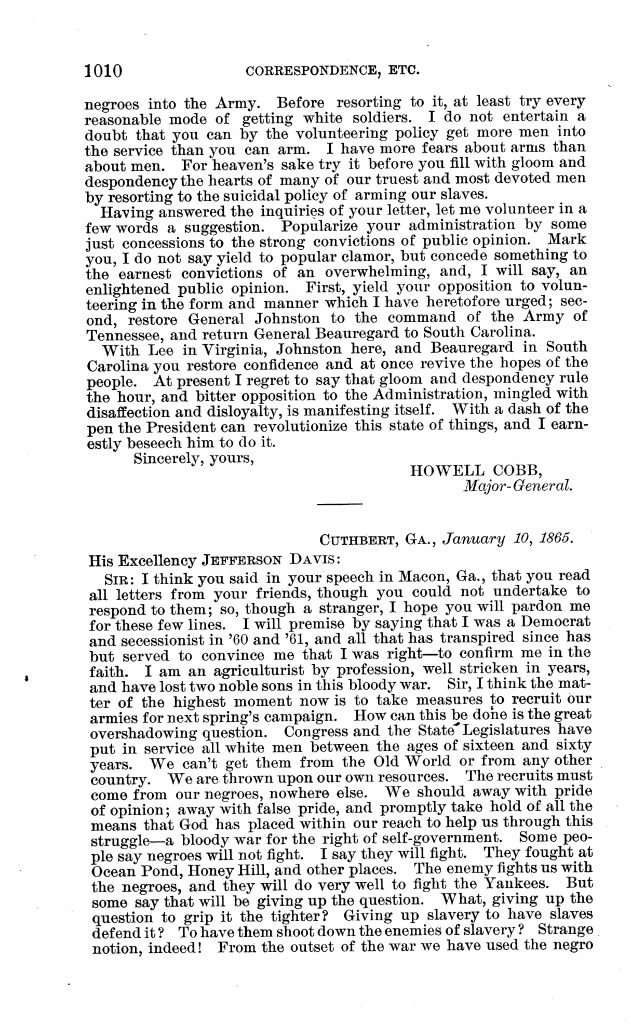 negroes into the Army. Before resorting to it, at least try every reasonable mode of getting white soldiers. I do not entertain a doubt that you can by the volunteering policy get more men into the service than you can arm. I have more fears about arms than about men. For heavens sake try it before you fill with gloom and despondency the hearts of many of our truest and most devoted men by resorting to the suicidal policy of arming our slaves.

Having answered the inquiries of your letter, let me volunteer in a few words a suggestion. Popularize your administration by some just concessions to the strong convictions of public opinion. Mark you, I do not say yield to popular clamor, but concede something to the earnest convictions of an overwhelming, and, I will say, an enlightened public opinion. First, yield your opposition to volunteering in the form and manner which I have heretofore urged; second, restore General Johnston to the command of the Army of Tennessee, and return General Beauregard to South Carolina.

With Lee in Virginia, Johnston here, and Beauregard in South Carolina you restore confidence and at once revive the hopes of the people. At present I regret to say that gloom and despondency rule the hour, and bitter opposition to the Administration, mingled with disaffection and disloyalty, is manifesting itself. With a dash of the pen the President can revolutionize this state of things, and I earnestly beseech him to do it.