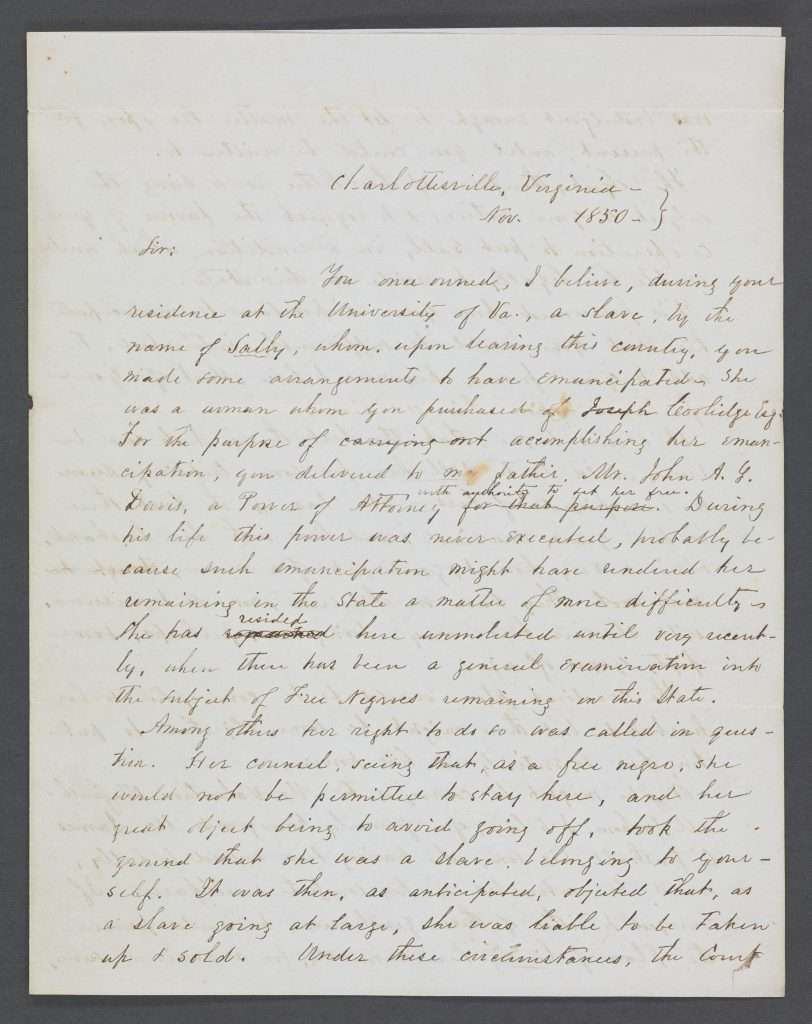 You once owned, I believe, during your residence at the University of Va., a slave, by the name of Sally, whom, upon leaving this country, you made some arrangements to have emancipated. She was a woman whom you purchased of Joseph Coolidge Esq. For the purpose of accomplishing her emancipation, you delivered to my father, Mr. John A. G. Davis, a Power of Attorney with authority to set her free. During his life this power was never executed, probably because such emancipation might have rendered her remaining in the State a matter of more difficulty. She has resided here unmolested until very recently, when there has been a general examination into the subject of Free Negroes remaining in this State.

Among others her right to do so was called in question. Her counsel, seeing that, as a free negro, she would not be permitted to stay here, and her great object being to avoid going off, took the ground that she was a slave, belonging to yourself. It was then, as anticipated, objected that, as a slave going at large, she was liable to be taken up & sold. Under these circumstances, the Court 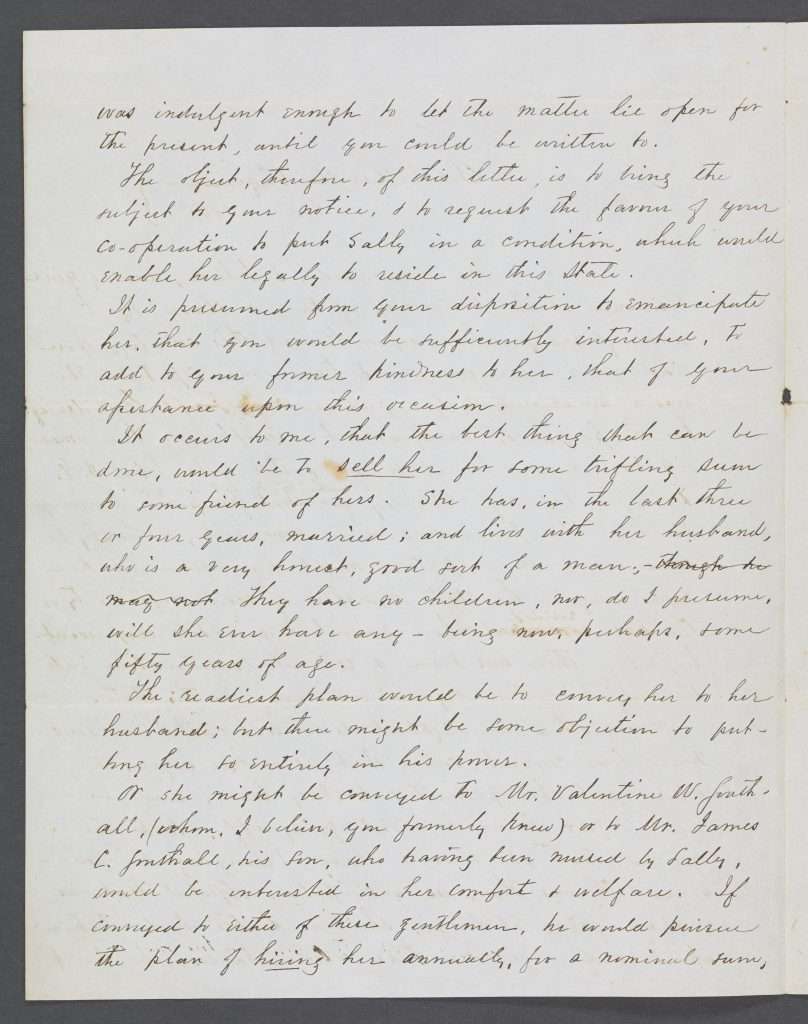 was indulgent enough to let the matter lie open for the present, until you could be written to.

The object, therefore, of this letter, is to bring the subject to your notice, and to request the favour of your co-operation to put Sally in a condition, which would enable her legally to reside in this State.

The object, therefore, of this letter, is to bring the subject to your notice, & to request the favour of your co-operation to put Sally in a condition, which would enable her legally to reside in this state.

It is presumed from your disposition to emancipate her, that you would be sufficiently interested, to add to your former kindness to her, that of your assistance upon this occasion.

It occurs to me, that the best thing that can be done, would be to sell her for some trifling sum to some friend of hers. She has, in the last three or four years, married; and lives with her husband, who is a very honest, good sort of a man.,- They have no children, nor, do I presume, will she ever have any—being now, perhaps, some fifty years of age.

The readiest plan would be to convey her to her husband; but there might be some objection to putting her so entirely in his power.

Or she might be conveyed to Mr. Valentine W. Southall, (whom, I believe, you formerly knew) or to Mr. James C. Southall, his son, who having been nursed by Sally, would be interested in her comfort & welfare. If conveyed to either of these gentlemen, he would pursue the plan of hiring her annually, for a nominal sum, 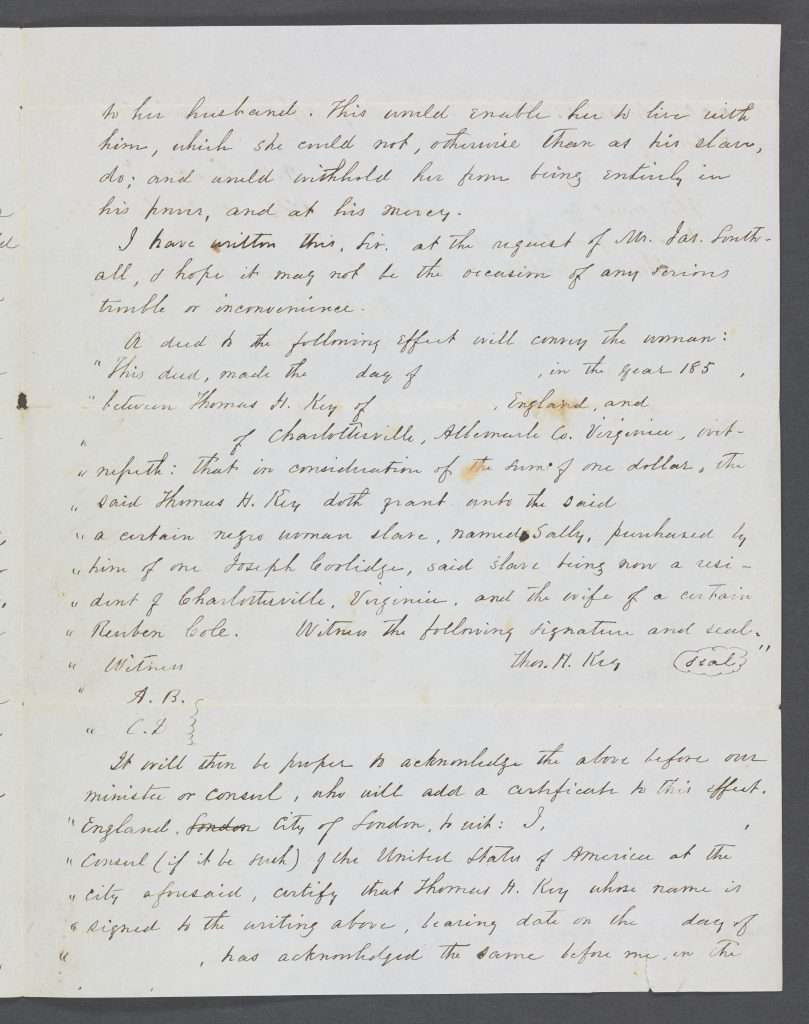 to her husband. This would enable her to live with him, which she could not, otherwise than as his slave, do; and would withhold her from being entirely in his power, and at his mercy.

I have written this, Sir, at the request of Mr. Jas. Southall, & hope it may not be the occasion of any serious trouble or inconvenience.

A deed to the following effect will convey the woman:

“between Thomas H. Key of [space], England, and

“nesseth: that in consideration of the sum of one dollar, the

“him of one Joseph Coolidge, said slave being now a res-

“ident of Charlottesville, Virginia, and the wife of a certain

It will then be proper to acknowledge the above before our minister or consul, who will add a certificate to this effect.

“city aforesaid, certify that Thomas H. Key whose name is

“signed to the writing above, bearing date on the [space] day of

“[space] has acknowledged the same before me, in the 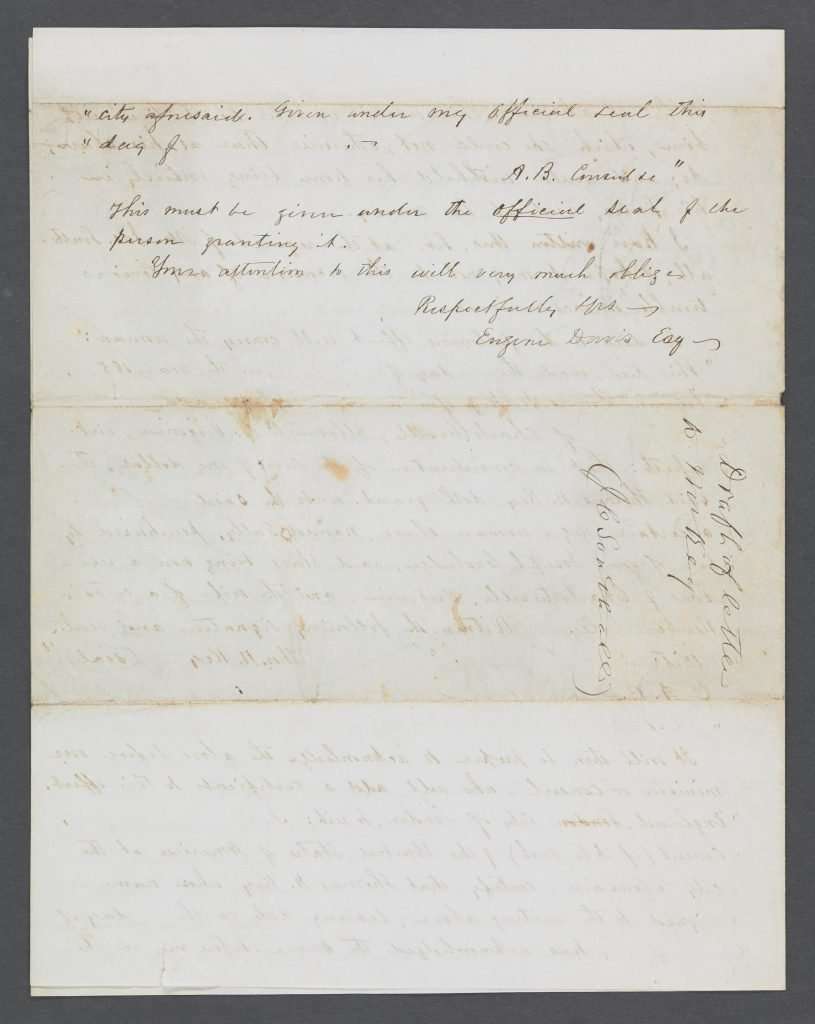 “city aforesaid. Given under my official seal this

This must be given under the official seal of the person granting it.

Your attention to this will very much oblige

RELATED CONTENT
Categories:
Type:
MAP
TIMELINE
November 1850
A lawyer named Eugene Davis writes Thomas H. Key in England about Sally Cottrell, whom Key had owned and ordered free in 1827 but who may still technically be enslaved.
CITE THIS ENTRY